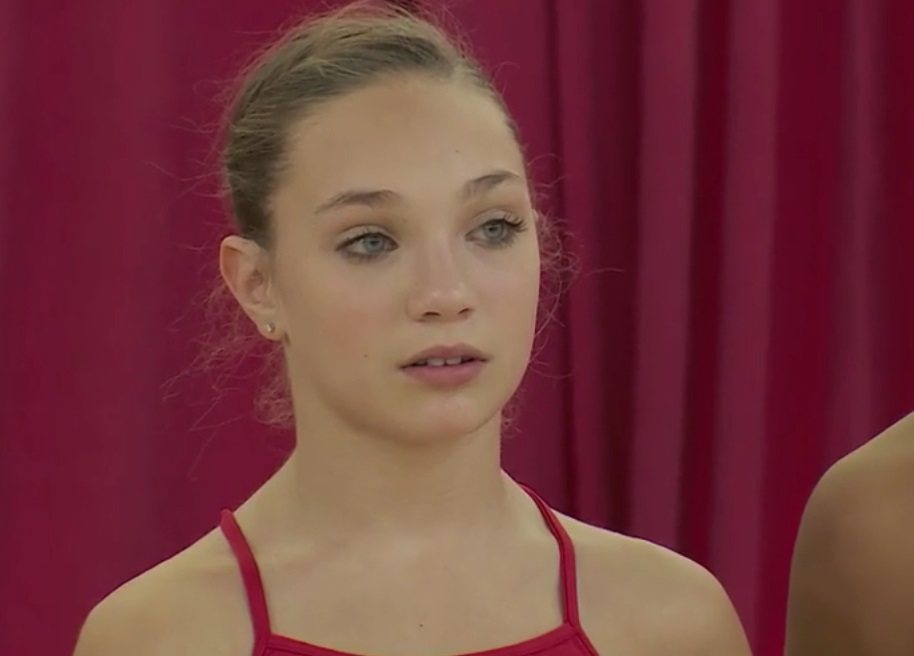 Last night’s Dance Moms was it…the BIG ANNOUNCEMENT. I think I took it about as well as Abby Lee Miller, and I’ve had a head’s up for months! 🙂 As the episode begins, the mothers are all atwitter about whether Melissa and her daughters will be sticking with the ALDC. When asked pointblank, Melissa admits that Maddie and MacKenzie will be exploring other opportunities and will no longer be a part of the elite team. Jill feels betrayed. Holly is confused that she wasn’t able to share this news long before now. Ashlee (I’m not shocked) is convinced that Melissa leaked the news of Maddie’s departure to the media herself in order to create more of a buzz. She may actually be on to something! Melissa promises she was just following her attorney’s advice, and hey, at least the moms’ know before MacKenzie does…she has no clue. Melissa predicts that Abby will be sad about letting go of her daughters, but happy that she’s prepared them for fame. Good luck with that.

Melissa approaches Abby who seems more consumed with her lipstick than Melissa’s admission. Melissa hems and haws and feigns fake tears while staring at the ceiling before breaking the news that this her daughters’ last season with the ALDC. Abby freezes, and Melissa is quick to assure the emotionally fragile studio owner that she had nothing to do with the rumors that her daughters would be peacing out from Abby’s tutelage. Abby quickly regains composure and warns Melissa that Maddie better never be on So You Think You Can Dance, Kids! Melissa back pedals. Melissa stumbles over her words, “Um no, Maddie won’t be, um, dancing on So You Think You Can Dance, Kids. No, no dancing. I can promise you I have never even heard of that new show that my daughter is in no way affiliated with so, um…” Don’t quit your day job, Melissa, if your day job is not being a giant liar. Abby tears up and acknowledges the cameras…why did Melissa wait until now to break this news? Could she not have given her a courtesy phone call?

At pyramid (curses! I thought this latest development would save us from pyramid), Kalani is in the last spot since she was absent last week for a family funeral and Kendall follows for “being fine.” JoJo is next for a great solo that unfortunately didn’t place, with Nia a spot ahead for (you guessed it!) being fine. On the second row are the sisters Ziegler with Brynn on the top of the pyramid for her part in the winning duet. The group routine for this week’s competition is brought to you by the Huntsman: Winter’s War. Nothing like some great cross marketing to make me think I’m not watching some hour long Universal Pictures commercial! Nia and MacKenzie will be doing a duet entitled A Long Good-Bye and Kendall and Maddie are granted a bestie duet. The final duet goes to Kalani and Maddie, and Maddie is shocked to be competing in two dances. Kalani jokes that Maddie has to make up for all the weeks she’s missed. I get it now. Abby wants all the true teammates to get to dance with the Ziegler sisters.

Abby gets emotional talking about what an asset that sisters have been to the ALDC. Maddie is tearful, but MacKenzie is confused. Leave it to Ashlee to interrupt to inquire about open spots on the team due to “what’s going on” with Maddie and MacKenzie. Melissa counters that this isn’t the way she wanted MacKenzie to find out (I love how MackZ is all, “What’s going on?”) and Abby retorts that perhaps Melissa’s attorney should have handled it differently. Holly shoos the girls from the studio so the moms can convene. In the holding area, the girls wonder what is happening. Melissa makes her announcement before breaking into tears, and MacKenzie is in shock. Nia silently cries as she embraces Maddie. Damn you, Lifetime. I swore I’d never cry over this scripted mess. Group hug! Abby is absent from the emotional exchange because she’s locked herself in the bathroom. The veteran moms agree that Abby needs to grow up and relish in the OG’s last season, but Ashlee wants to make sure Brynn’s spot is secure, so she attempts to check on Abby.

The following day, Melissa invites Holly and Jill to brunch to reminisce. The women have certainly brought out the worst in each other, but they have had each others’ backs and mama-beared their bonus daughters as fiercely as they would their own. Ashlee is beside herself back at the studio. This must be Brynn’s moment! Abby is trying to keep it together. She shows the girls a trailer of the Huntsman: Winter’s War (funny how all this works!) to inspire them for the group number. Abby tries to maintain a stone face, but her rehearsals for the duets are mainly just a walk down memory lane with the the girls wishing their friends well. Jessalyn jokes that Maddie has two solos because Abby wants to squeeze every last bit of talent out of the poor girl in her final weeks. Melissa is concerned that Abby has given Maddie duets with her two best friends to twistedly pit the girls against one another. While critiquing Nia and MacKenzie’s duet, Abby breaks down. Holly recognizes that Abby isn’t the complete hard ass she portrays. She’s losing her “dance daughter” with Maddie’s departure, and the moms bond over the significance of Kendall’s last duet with bestie Maddie. Please, if you have a Dance Moms drinking game, please don’t take a shot every time someone mentions Huntsman: Winter’s War. You’ll thank me for that.

At the competition, Maddie and Kalani are the first to perform their duet. The girls are amazingly talented and perfectly in sync. Am I crying again? NOOO! At least not until Nia likens her routine with MacKenzie to their actual good-bye, citing their friendship since practically (MackZ’s) birth. Holly is in tears, I am in tears, Abby is pretending she’s not in tears. Geez. Let’s just add Kendall and Maddie’s beautiful duet into the mix! I hate how emotional I am! Backstage, Abby raves about each performance as the moms get weepy. Abby encourages Kendall to channel the confidence she has in a duet with Maddie into her solos. Ashlee interrupts to wonder what Kendall will do without Maddie to help her. Seriously, Ashlee? Can we just have our moment please? In that group number that’s inspired by that movie (what was it called again), the girls are dynamite, with Maddie and MacKenzie going head to head as dueling enchanted princess sisters. Despite the fact that there has been a lot of chatter about Chris Hemsworth seeing this routine at some point, he’s noticeably absent from this busted auditorium. Le sigh. It’s a fabulous group dance though.

All of the ALDC members are confident about their performance at the competition. At the awards ceremony, Nia and MacKenzie’s duet takes first place in their division. In the teen division, the team knows that they are prepared for a one-two punch. Maddie is a double winner, placing second with her dance with Kendall and the top spot with Kalani. Shockingly, the group routine only scores second and Chris Hemsworth is nowhere to be found. Ashlee blames Melissa’s announcement while the other moms blame a minor costume malfunction. When Ashlee voices her opinion to Abby, Abby storms out of the dressing room.

TELL US – WHAT DID YOU THINK OF LAST NIGHT’S EPISODE? DID YOU GET EMOTIONAL LIKE MY STUPID SELF?

Dance Moms is one underrated reality show. Let me be the first to tell you, this cast brought drama to…
Reality News 6 months ago