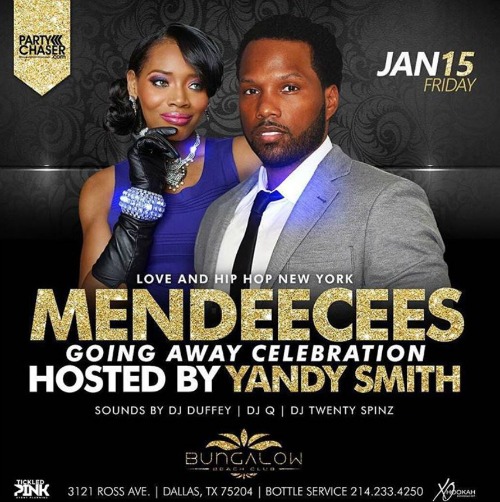 Is it really tacky to give your loved one a helluva send-off before they’re placed in locked-down?  Well apparently Yandy Smith, one of Love & Hip-Hop:  New York’s stars, didn’t think throwing a ‘Going Away Celebration’ for her husband of one year and father of her two children, Mendeecees Harris was such a terrible thing to do but some folks on Twitter disagree.  According to Bossip, when news of Yandy’s club affair that is being held tonight in Dallas, Texas was leaked out and hit the internet, Twitterverse ‘turnt up! ‘

According to Bossip, the comments were hardly complimentary nor empathetic about a move, many considered to be outright brash and shameless, for a man who broke the law:

W-H-I-T-N-E-Y who celebrates these things? Sounds like a good place to catch anothee case?
Nigerian Goddess ‏ its like what are y’all celebrating?
Princess CoCo Imana  They act like Mendeecees us going away to community college or something.
Brian Fellows ‏@BeezieTaughtM3 they called it a celebration. It’s not like he hasn’t been there before. It’s like having 4 kids and 4 baby showers, stop it

The former artist manager’s husband received a 97 month conviction last month, plus five years supervised release, after being found guilty of federal drug trafficking charges.  Mendeecees, who also co-stars on the reality series franchise has already received a credit of 15 months, so he has but a mere less than seven years to go.  The father of four has already paid back $100,000 to the feds from his series earnings.  Mendeecees is expected to surrender himself on January 19 to the Allenwood Low federal prison facility in Pennsylvania but he requested from the court to be placed at a facility in Otisville, New York in order to be closer to his wife and children.

RELATED:  Mendeecees Harris Speaks Out About Prison Sentence; Explains What Led To Crimes!

TELL US:  DO YOU THINK THROWING A ‘GOING TO PRISON’ PARTY IS AN APPROPRIATE MOVE?

Bethenny Frankel’s announcement that she is departing Real Housewives of New York has left an open wound in many of her fans.…
3 years ago

So much reality TV, so little time. We are thankful for DVR since there are a lot of time conflicts…
4 years ago

Andy Cohen and Anderson Cooper’s AC2 show was the place to be for Bravolebrities. Real Housewives of Beverly Hills cast members Kyle…
Hot Photos 4 years ago