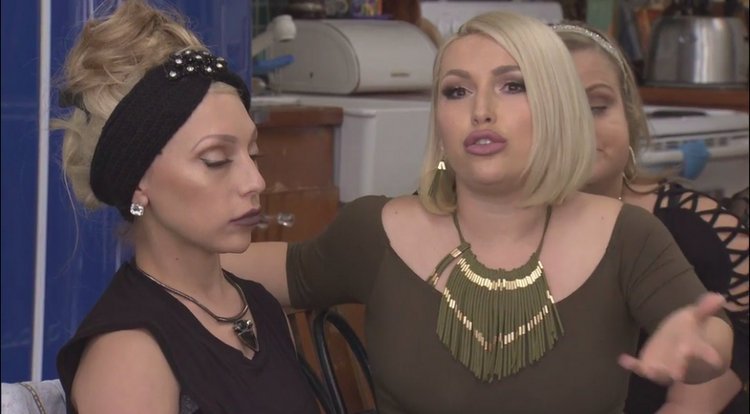 New gal Mary Russell has officially inserted herself into the hornet’s nest of Little Women: LA this season, becoming the newest cast member to cause strife and friction among a group of women who already need deep, prolonged therapy. As Mary holds auditions for her fashion show this week, Elena Gant continues to get her nose out of joint about Mary’s “authenticity” – or, more likely, her success. Which Elena clearly resents, given her own fashion line failure. Terra Jole can’t help but be caught in the middle of her two warring friends – just the way she likes it! But at least Briana Renee doesn’t strip down to her skivvies again. And for that, we give thanks.

We begin with Elena and Jasmine Sorge having lunch. They’ve come so far as mommies dishing about babies now instead of enemies dishing about each other. Both seem grateful for that growth. But Elena has a new target in her sights: Mary, who she sorta-kinda made up with at the Sex Expo, but who she apparently still hates. Because, jealousy is hard. Jasmine’s anger is focused on Briana, who called her out for being “up Terra’s a$$” last week. Finally seeing Briana for the crap friend she is, Jasmine is thiiiiiiiis close to closing the Briana and Matt Ericson [Grundhoffer] chapter forever. Which will leave Briana with a grand total of zero friends. And her own head up her a$$, where it generally prefers to reside.

Christy McGinity Gibel is practicing her catwalk for Mary’s upcoming fashion show auditions. She talks with Autumn about her fears about Todd’s gastric sleeve surgery, which presents a whole host of complications. She’s also recovering from her own surgery, which left her with continued side effects from the mini-stroke she suffered when the surgeon nicked an artery. She’s in no position to take care of Todd – pre or post op – in any case.

Briana and Matt are back at the photographer’s studio, where Michael – a “photographer friend” – shows them the pics Briana hopes Maxim Magazine pays big bucks for . Matt just hopes that we can all forget his facial expressions while leering at these “boudoir” shots so that we can all get on with our lives without significant PTSD. Blech. He’s all, I can’t wait until the girls see this so I can say ‘My wife is HOT!’

Serious question: Did Matt graduate the fourth grade? Someone run a background check on THAT. 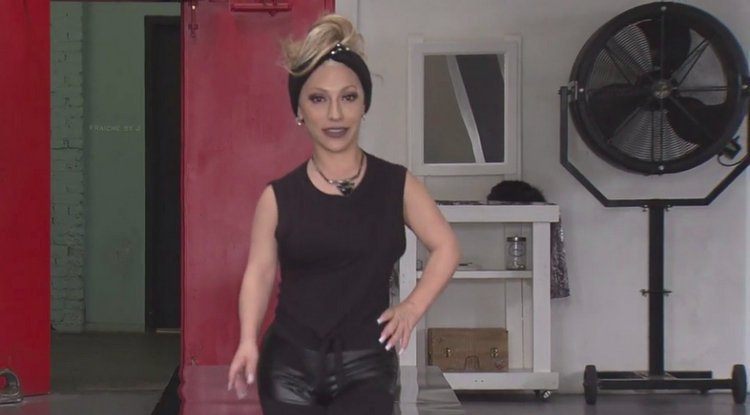 Over at Mary’s studio, Elena and Jasmine arrive to discuss the fashion show. Most of the ladies are auditioning to walk – if by “auditioning,” the understanding is that they’ll be included because they are all on a SHOW together and will of course be included. Tonya and Terra aren’t coming – Terra because she’s sick, and Tonya because she’s seething. Elena is there to support “her girls,” but makes it clear to Mary that she doesn’t want to be involved in the walking or the posing or the business end of things. Mary is disappointed in Elena’s attitude, but shows a clear superior maturity when she lets it roll off her back easily, moving her focus to the other gals – which now include Christy and Briana too. 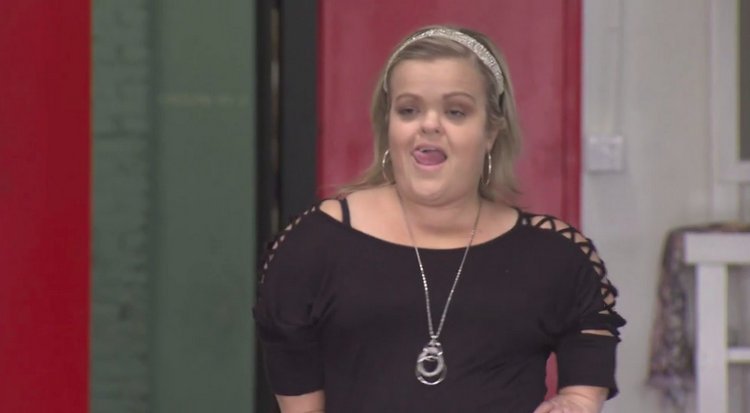 Briana, AMERICA’S NEXT TOP MODEL, robotically stomps down the runway, dreaming of her big break. Christy hams it up a bit, showing that she doesn’t take this schtick – or herself – too seriously. Which is what I used to love about this chica! More of this, please, Christy! But when Mary asks Christy to walk again to show her a different style, Elena takes the opportunity to snap at her about impossibly high standards. Oddly, Jasmine jumps on board to pile on – which is bizarre, considering Mary liked her walk. 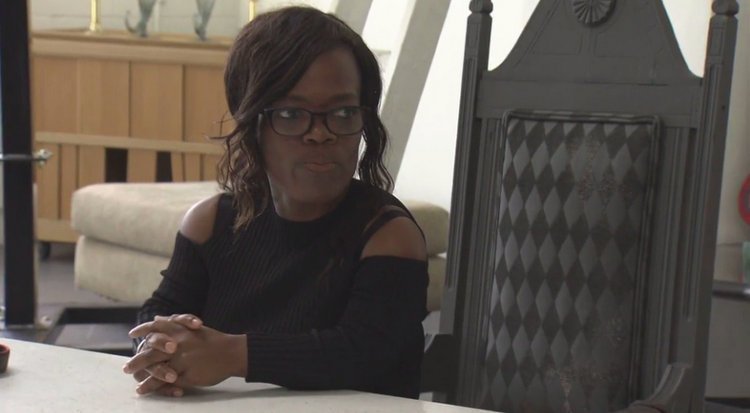 But when Mary shows the ladies what she’s looking for by taking to the runway herself (per Elena’s snarky request), Elena gripes about how Mary doesn’t look like a “professional” model, blah, blah, blah. Elena calls Mary out about her vision, etc…but Mary has no time for this drivel. And she certainly doesn’t need advice from someone who’s never run a fashion show, let alone created a single garment for one. But Elena is sticking to her sad, petty reasoning: She doesn’t think Mary is on the up and up, period.

True story, ya’ll: I hosted a party for my 7-year old daughter and three of her friends this weekend, and they were less childish than what I’m witnessing at this very moment. Case in point: Elena continuing to rag on Mary about not being “all that you say you are” despite literally knowing nothing about her prior to one week ago. Even Christy is uncomfortable with this idiocy that Elena’s bringing to a pretty neutral event. Finally, having run out of rage-fuel, Elena bids adieu to the group, leaving Mary to bottom line her attitude: She’s jealous and angry. Done and Done.

But when Briana starts defending Elena as a friend who “wants to support friends,” Jasmine hears her trigger words and abruptly exits too. She can’t stand to hear Briana – of ALL people – talking about being a supportive friend. HA! Jasmine storms off, with Christy, Briana and Mary wondering WTF just happened?!

Sometime later, Jasmine and Terra meet Mary out to go souvenir shopping before Mary heads back to the UK. Jasmine tells Terra about Briana accusing her of being “Team Terra.” Terra says that Tonya is basically mad at her for being “Team Mary.” (Just for the record, I am team Preston.) As they shop, Terra decidedly does want to make someone care about her team, dishing to the women about a painting recently done of her that will be debuted in an art gallery. But when Mary tells Terra about Briana’s photo shoot, the wind comes right out of her overblown sails. She doesn’t like competition – even though she’s preaching the whole “let’s support each other!” speak to the rest of the group. Hmmm.

Terra still wants everyone to come gawk at the unveiling of her painting, although Jasmine doesn’t know if she can contain herself around Briana. And Mary is pretty much done with Elena going HAM on her at every opportunity. If she wanted to go back to high school, she’d enroll. And she hasn’t physically fought anyone in a long time (was she a professional fighter? OMG!). But with this Elena nonsense lately, Mary snarks, “I feel like coming out of retirement!” Uh-oh.

Christy and Todd are at home awaiting news about Todd’s surgery. The news is not good: Todd has severe sleep apnea, which cuts off 60% of his oxygen at night, has an enlarged, fatty liver, and needs to consider these risks before surgery. But the risk his obesity presents on a daily basis is just as scary. Christy assures Todd that he’s on the right path. He needs the surgery to lose weight, or he might die – sooner rather than later. 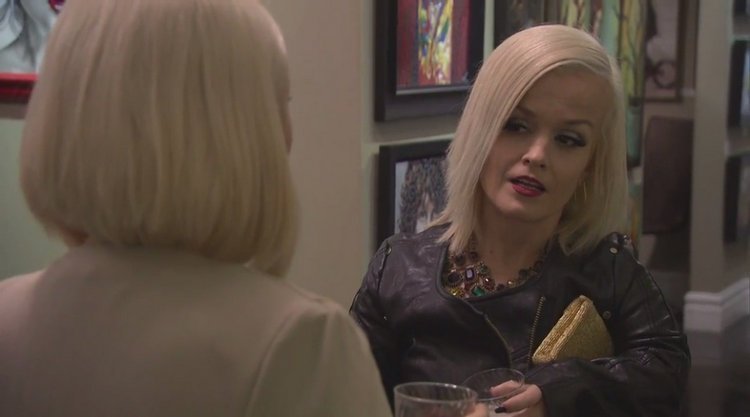 It’s the night of Terra’s art gallery gathering, and she strolls in with Joe on her arm to literally admire her own image. It’s almost poetic, the irony here – eh? “It’s not every day you get turned into a masterpiece!” gushes Terra about herself. And there we have it. Elena and Preston arrive, who love the painting too. Jasmine is a no-show, which Elena suspects is for reasons other than Jasmine’s sick child (which she’s using as an excuse to avoid Briana). 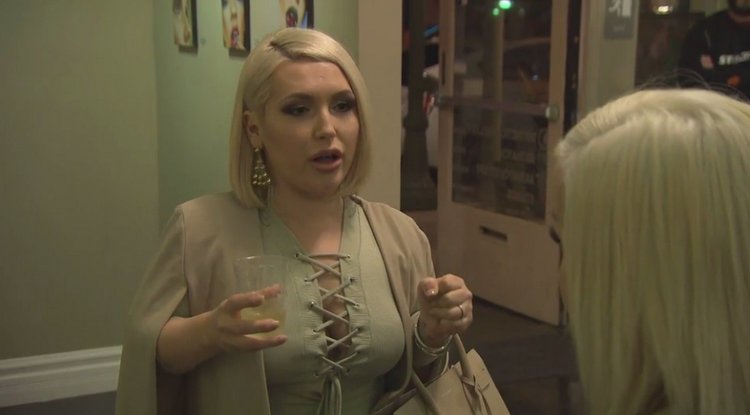 Almost immediately, Terra and Elena talk about Mary, who Elena thinks is a fake – but who Terra stands by. She doesn’t want Elena to  attack Mary so relentlessly. She’d prefer not to be in the middle of everyone’s issues with Mary as well, so she pulls Mary aside after the rest of the group arrives to discuss the matter. Because that makes total sense! But before that happens, Terra asks Briana about her photo shoot. Briana plays coy, deflated that she can’t “shock them with her success!” when the magic Maxim cover happens .

On her way to discuss the Elena bullsh*t with Terra, Mary is stopped by Briana to hear her inane complaints. Why did she tell Terra about her photo shoot? wonders Briana. Mary, who still seems like a normal human being, apologizes for spilling the beans… but has a look in her eye that says, Please let me carried away from these morons This. Very. Second.

Also popping by to throw some shade at Mary is Tonya, who reminds Mary that she is ALSO A DESIGNER. Mary’s like uh huh, mm hmm. And…your line is sold WHERE? Before they can get too far down Tonya’s winding road of petty nonsense, Terra interrupts to finally pull her aside. And to remind Mary there is a strict no fighting policy in this art gallery! As for line dancing venues, well… Terra’s okay with that.

Outside, Terra and Mary finally have their heart to heart. In tears, Mary wonders what the actual f**k is wrong with these women? They are a clique from hell, and she wants no part of it. Terra wishes things could have been different, but she knows that inviting anyone into this group means a ritual hazing the likes of which few can survive. It might be best that Mary is heading back to the UK soon, and it looks like she may reconsider involvement in this show, going forward. I mean, competing with invisible fashion lines is rough stuff!

Well, it looks like LWLA tossed out the newbie. RIP Mary’s character. We laughed, we cried. We felt depressed for the sorry situation you found yourself in. We bid you farewell. But now we are stuck here with this same ole’ bunch. (COME BACK!!!)

Post-art gallery night, Jasmine and Briana meet for lunch – and for some real talk. Jasmine is still pissed about Briana claiming she’s taking her marching orders from Terra, and wants to set the record straight. Briana just can’t believe that Jasmine is turning on her – because Briana is truly a delusional nightmare. Jasmine is not the bad guy here! Briana is the special snowflake whose feelings can never be hurt, nor can her garbage decisions EVER be questioned.

“I’m getting tired of being the friend who always does what you want,” says Jasmine. Briana can’t hear these words, or doesn’t want to, defending that she IS a good friend, dammit! Tearing up, Briana suddenly realizes that her one remaining ally is about to walk away. Jasmine stays strong, finally telling Briana that she’s not sure they can remain close. Time will tell.

Sadly, if Briana’s wake up call wasn’t losing her family and every other friend in her life, she probably won’t learn a lesson from this either. But Matt will be happy that his master plan is working out just the way he designed it. Gross.

TELL US: WILL JASMINE REALLY CUT TIES WITH BRIANA? SHOULD MARY LEAVE, OR STAY AND FIGHT FOR A SPOT IN THE GROUP? IS ELENA’S JEALOUSY OUT OF CONTROL?