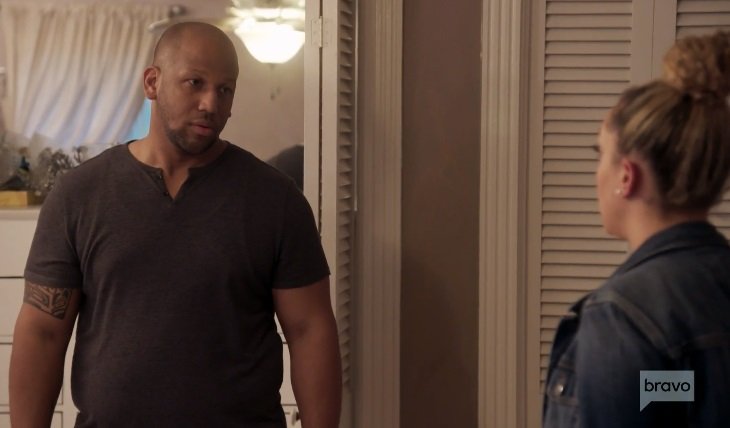 It’s hard to believe last night was the finale of Southern Charm New Orleans. I’ve really grown attached to these folks, and let’s be honest. These gentlemen are easy on the eyes! If you don’t believe me, let’s start the recap, shall we? Lots of gratuitous skin on the final episode which suited lil’ ol’ me just fine!

Jon Moody is prepping canvases for Gian’s party, but I’m not really focused on his artwork. Damn. Although swimming in athletic leggings. He takes a call from Gian who is very excited about the party. Speaking of Gian, Tamica Lee shares with her friends over brunch that Gian has blocked her on social media. She reveals that the pair had a very frank conversation about Gian’s treatment of Barry Smith and his dreaded “f-word” situation. Reagan Charleston comes to her friend’s defense. Barry was so quick to recognize and apologize for his behavior, and Gian heard the story third hand. Susan agrees. It’s ridiculous for Gian to have cut business ties with Barry as if she’s never said something completely ignorant and regrettable. Reagan is sure Gian’s jealousy of Tamica dates back to their high school days. Regardless, the ladies believe both Gian and Tamica are more alike than Tamica is willing the admit…and they are still going to be serving together on the board of Son of a Saint.

Tamica returns home from lunch, and she unloads on Barry. She is peeved that her friends think she and Gian have a lot in common. However, she does feel bad about the comments she made to Gian about being able to keep a man. After all, she did separate from Barry at one point. Barry is worried about the upcoming jazz party that Gian is co-hosting with Jon. He wants to be able to support Jon and hopes Tamica will be a lady and steer clear of Gian. That’what he hopes, but in reality, he knows the event is going to be a shiz show. Gian is going to come for Tamica guns blazing, and his wife is bad at holding her tongue. Gian even canceled her gym membership after Tamica went off on her. 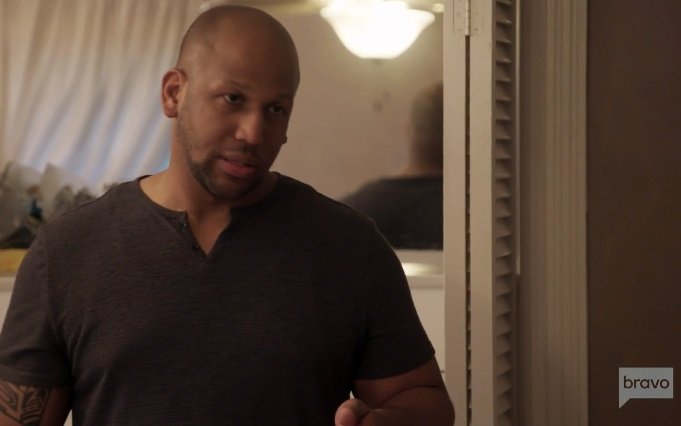 Justin Reese and his girlfriend Kelsey are moving into Justin’s childhood home while his house is being remodeled. Justin is excited to be back under his parents’ roof. He loves spending time with his mom. Kelsey knows it isn’t going to be as easy as he thinks, and she doesn’t want to be bunking with his folks for half a year. She is disappointed to learn that there are additional things that need to be done before the construction loan can close, which means they may be squatting with Dottie even longer. Kelsey is fed up with Justin’s laid-back attitude. As his girlfriend, she can be supportive, but she’s rearranging her life for him without the commitment of marriage. She’s tired of it. She is also whisper yelling because she recognizes how difficult it is to get angry with her boyfriend in his parents’ home. His mom interrupts after hearing raised voices, and she continues to share her frustrations. Justin doesn’t mind bringing his mother into the fray. Dottie is very objective! Dottie reminds Kelsey that Justin’s drive in his career isn’t for him, it’s for them, before hugging them both and retreating. Justin beams. See Kelsey, my mom gives great advice and is on our team. Kelsey just sees it as the lack of privacy which initially concerned her.

After recent events, Tamica is hoping to connect with daughter Rani. Tamica is hoping her friend Susan can get through to Rani under the guise of a radio interview. Being the only black child at an all-white school can be difficult. Susan asks wonderful questions and learns that there are kids that are mean to her but she stands up for herself. She urges Rani to be confident in her uniqueness. When Susan inquires what makes Rani the happiest, she gets teary when she responds. She likes singing with her family…all of her family. She hugs her mother and Tamica realizes that Barry is right. She has spread herself too thin with work, and she really needs to get her priorities in order when it comes to family time. 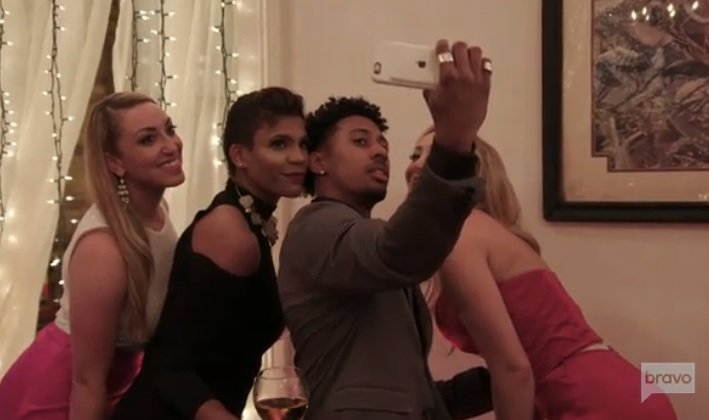 Reagan and Jeff Charleston are also working on their relationship. After his counseling sessions, their marriage has gotten stronger, and Reagan has left the French Quarter (for the night at least) to cook dinner for her husband at home. She prepares a delicious gumbo, and Jeff brings up the topic of children. Jeff is ready, but Ashley is not. He’s worried that the NFL has shortened his lifespan, and he is worried he won’t have much time with his kids if he doesn’t have them soon. Reagan wants to have children with Jeff, but she wants the time to be right. Additionally, she is concerned about Jeff’s future health and the idea of adding kids into the mix with that uncertainty is terrifying to her.

It’s the day of Jon and Gian’s event, and we are treated to full-on ass nudity from Barry. Thank you, Bravo! Tamica tells Barry that Reagan’s period is eight days late. Barry doesn’t see the issue–she and Jeff are married after all. God love Barry. He’s adorable. And hot. Tamica calls Reagan and urges her to drink water at the party just in case. They will use the pregnancy test from the adult Easter egg hunt. It will be great, and she promises she won’t tell Barry…as Barry stands feet away listening to the conversation being broadcast on speakerphone.

That evening, a very well-dressed crew convenes on Gian’s event, and it’s already awkward between Gian and Tamica. Also, remember when Tamica pretended she wouldn’t let Barry in on Reagan’s little secret? She should have probably clarified if Reagan had let Jeff in on Reagan’s little secret. She hasn’t. Imagine Jeff’s surprise when he finds out from Barry that his wife’s period is eight days late. Jeff is over the moon. He’s speechless and incredibly excited. He’s getting teary about fatherhood. Jeff professes that he is going to be the fun dad. Across the party, Reagan admits to Tamica that she hasn’t mentioned any of this to Jeff. She doesn’t want to get his hopes up in case it’s a false alarm. Tamica jokes that either Reagan is pregnant or getting fat. They’ll know the answer soon! 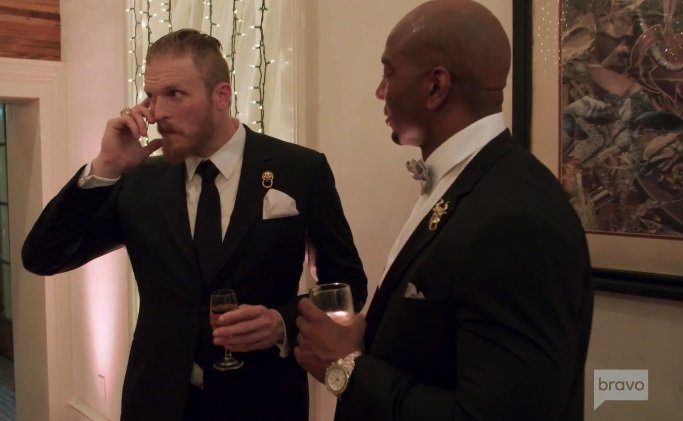 Jeff prances over to Reagan like a puppy dog. He is so excited about the news he heard from Barry. Reagan quickly shuts down his expectations. It could be nothing, and she didn’t tell him because she wanted to be certain before she said anything to him. Jeff promises he’s happy no matter what, and Reagan reveals in her talking head that she’s more concerned about bringing a child into their currently strained relationship than anything else. As guests continue to arrive, Tamica asks Gian if she could throw the cake in anyone’s face, who would it be? Gian coolly responds she’s throwing it in her own face, because, you know, self-reflection. Susan catches up to Reagan at the bar and raises her eyebrows at Reagan’s overflowing cups…of water and cleavage. Does she have something she wants to share? Reagan insists she doesn’t, but Jeff announces, “She’s glowing” which doesn’t help the gossip mill. Outside, Tamica pulls aside Gian to offer up what seems to me to be a very insincere apology, but because it’s the finale, Gian accepts Tamica’s olive branch. Jeff is running around like a kid in a candy store telling a stranger about his wife’s missing menstrual cycle as Tamica ushers Reagan into the bathroom to pee on a stick. The results are in, and Reagan shrieks that it’s the best possible news ever! 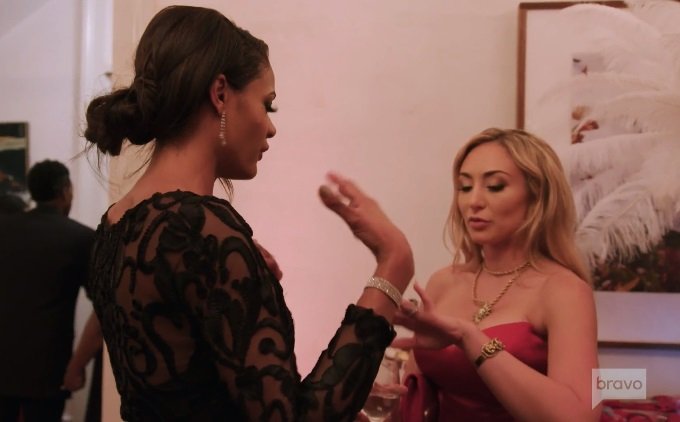 Tamica then proceeds to pull Barry into the same restroom to spice up their sex life. It certainly needed the spicing. Reagan approaches Jeff to reveal the results of the pregnancy test. It’s negative, and Jeff is clearly crestfallen. After his family betrayed him, he really wants to start one of his own. It’s actually pretty heartbreaking to watch. The jazz band begins as Jon begins his painting exhibition on a rooftop. He’s extremely talented. Sheesh! As the charmers opine on their friendships and relationships, they send off Chinese lanterns into the New Orleans night. An hour later, Kelsey shuts down Justin’s advances. She’s not going to have sex with him in his parents’ house! As far as his folks are concerned, she’s a virgin. Perhaps that will light a fire under his ass!

TELL US – WHAT DID YOU THINK OF THE SOUTHERN CHARM NEW ORLEANS FINALE? DO YOU HOPE THEY COME BACK FOR A SECOND SEASON?

Bravo Shows That Were Axed And Left Us Hanging

Now that Southern Charm’s Austen Kroll is officially done with Olivia Flowers, Madison LeCroy is speaking out, sharing who she…
Reality News 3 months ago

Am I the only one who remembers Southern Charm New Orleans fondly? There was just so much drama. All. The.…
11 months ago

There’s no doubt about it. We are in the middle of a Real Housewives baby boom. Or at least that’s…
4 years ago