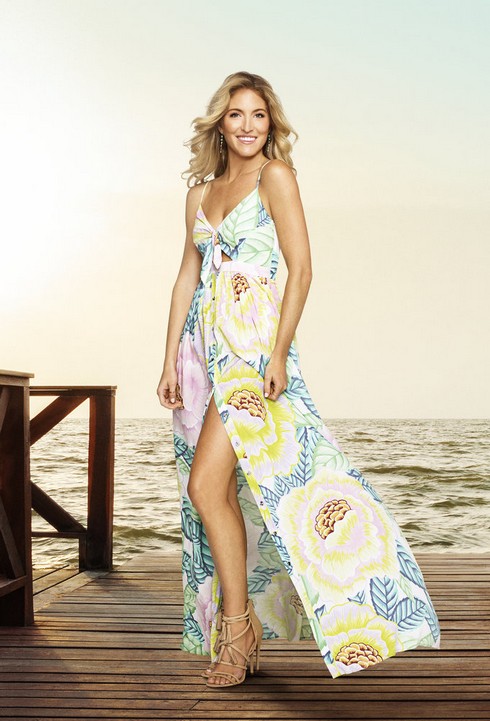 When I watched the episode of Summer House with Lauren Wirkus laying into Cristina Gibson for “accusing” Jaclyn Shuman of flirting with Carl Radke, I was wondering what Lauren would think watching the previous episodes because it did come across like Jaclyn was flirting with Carl. She kept talking about sleeping in the same bed with him, so I thought that was pretty “flirtatious,” but Jaclyn provided some back story to explain that conversation. Will it make the viewers look at their interaction with a different perspective?

Believe it or not, but her explanation does make sense. Do I still think she was flirting with Carl? Yeah, I do. It seems like Jaclyn flirts with everyone and the whole cast (except for Cristina) is okay with it. Still, I have to say that I was surprised when she shared some additional information about her conversation with Carl.

I’m not a fan of Cristina’s meddling, but without her pretty much nothing would happen in this show, so she is at least keeping things interesting. Nevertheless, I did agree with her when it came to her take on the Jaclyn and Carl interaction (based on what made the show). I would think the same thing if I saw two people talking about sleeping in the same bed for hours, but there was apparently more to the story.

Jaclyn did an interview on the Buttered Pop podcast and clarified the room situation in the house: “The executive suite was actually where Cristina, Carl, and myself were supposed to sleep because we’re guests.” This is in comparison to the other cast members who are renters.

Apparently the conversation we saw with Jaclyn and Carl talking about sharing a bed wasn’t the very forward flirt fest that came across on the episode. Jaclyn insists there was more said before that exchange. She says she told Carl, “I don’t feel comfortable sharing a bed with you, even if it’s platonic because I don’t know you that well. I know it’s childish, but I just don’t know you that well.”

Jaclyn continued, “Whenever I came back from Greece, one of my good girlfriends who has done a shore house with Carl goes, ‘Honestly he’s a good guy. He’s a lot of fun. He’s very respectful. I’ll let him know how you feel about the situation.'”

She explained that what we saw – them chatting about sleeping in the same bed – wasn’t a hookup initiation. Supposedly it was more of an apology fest for what Jaclyn said to her friend in Greece. “I pulled him aside and said ‘I wanted to apologize for saying, I wouldn’t share a bed with you. I just didn’t know you. I didn’t know if you were drunk something would happen or you would try something”

Jaclyn explained how she feels Cristina skewed the situation. “Cristina is listening to all this and the next morning I was like ‘Oh you didn’t get in the bed.’ He said, ‘I felt bad waking you. You looked so peaceful and I know you had a really hard week with work.'”

And then she talked about what we all ended up seeing on Summer House. Jaclyn said, “I don’t think there’s anything wrong with that conversation and the way it got back to Lauren was ‘Jaclyn told Carl that she wanted to sleep with him. And Carl said she’s so pretty when she sleeps.’ That’s not what happened at all and I think that’s why you saw me tell Cristina to shut the f–k up.”

Based on what was shown, Jaclyn’s “shut the f–k up” seemed to be overkill, but if this is all true, I can see why Jaclyn might be annoyed. It’s definitely a different account of events than the viewers got to see.

RELATED: Cristina Doesn’t Want To Speak To Lindsay Ever Again

Just like the rest of the cast, Jaclyn is pretty much done with Cristina, even though she kept trying to give her a chance. She recalled, “Being in the house at the beginning, I would see everyone getting annoyed or frustrated with Cristina or saying little comments about how she was meddling. At first I was like I feel bad that everyone’s getting upset with her. I don’t feel like she’s trying to do this on purpose.”

And now she feels a totally different way since she stated, “I think she’s just a shit stirrer.”  She later said, “I don’t see you as the victim anymore. You’re doing it to yourself and committing social suicide.” Damn. Apparently that is the case – at least in this clique.

Jaclyn added, “I don’t know that I feel a need to continue a relationship with someone who doesn’t understand that certain things that went on this summer were so lighthearted and nothing to make a fuss out of. She sees it her way and I see it my way.” Well, if there’s a Season 2, I’m sure Cristina will be on it since she is the one person who has drama with everyone in the cast, so Jaclyn might have to hang with her again.

Aside from referring to Cristina as a “shit stirrer,” using those exact words, and other phrases to convey that same thought, Jaclyn owned up to her flirtatious nature by saying, “I flirt with anyone. I practically would flirt with the door if I think the door is really beautiful.” She even admitted, “After watching the show, there are things that I can see how they can be taken. I’m going to take a little step back and be a little more aware.”

Jaclyn was also asked if she and Kyle Cooke have hooked up since making out on the party bus and she teased, “You’ll just have to tune in,” which makes me think that they have, or she’s just really getting good at hyping up a reality TV show. She was also asked if she was interested in pursuing a relationship with him. She giggled and said, “No comment,” which doesn’t seem like a lot in isolation, but this was after her adamantly declaring that she had “no interest” in Carl. So maybe there is more to her flirtation with Kyle?

TELL US – DO YOU LIKE JACLYN SO FAR? THOUGHTS ON JACLYN’S VERSION OF THE STORY OF HER & CARL TALKING ABOUT SHARING A BED? DO YOU WANT JACLYN & KYLE TO HAVE A RELATIONSHIP?

While many of us are in the midst of fighting frigid winter temperatures, it’s almost time for another round of…
Reality News 4 days ago

Buckle up, reality competition fans. Peacock has a new show called The Traitors, and I am going all in! There…
Reality News 4 weeks ago