Last night, Little Women: LA delved into some painful topics, namely Terra Jole getting frightening news that she may have breast cancer. Elena Gant also hosts a party after the baptism of her twin boys, at which Jasmine Sorge announces that she and her husband Chris, not Terra and Joe Gnoffo, were chosen as godparents to the little wee ones. Terra does NOT take the news well, to put it mildly. Meanwhile, Christy McGinity Gibel is busy navigating life with her overbearing mom and daughter as she prepares for Todd’s gastric sleeve surgery.

Tonya Banks – who’s still imagining that her activewear line is ready to launch – is out shopping for baptism clothes with Elena. When Elena reveals who she’s chosen as godparents, Tonya seems shocked. And caught in a bind, as she already spilled the beans to Terra that Elena was thinking of choosing her. Ruh-roh. Elena is adamant that Terra’s priorities aren’t straight enough to be a suitable godparent though, and that’s that. So – this should all go over swimmingly at Elena’s upcoming baptism party! 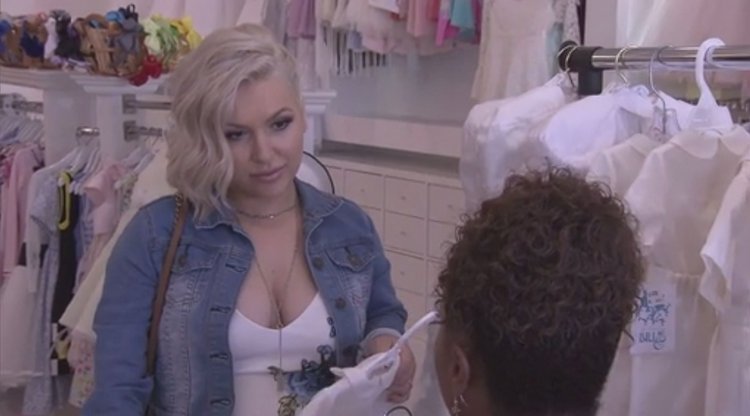 Christy is at home helping Todd prepare for gastric sleeve surgery by encouraging him eat healthier. Step one: removing all of Todd’s favorite foods from the fridge…the pantry…the sock drawer. Todd is ready for a new life. His aches and pains are through the roof, and he’s been living a nearly disabled existence because of his weight. To her credit, Christy believes that Todd does want to change, maybe for the first time.

Both Christy and Todd are also concerned about Autumn’s current love interest, who is apparently some kind of British a$$hole that never sends flowers! Mmmkay. Also, he makes Autumn a rude girl (at least that’s what Christy claims) and he drinks too much. Time for a Christy intervention.

Terra and Joe are at home settling into life post-Dancing With The Stars and hernia surgery. To appear domesticated, Terra cooks up what Joe can only describe as “mercury poisoning.” But now is no time for jokes, because Terra has serious news for Joe: She got irregular results from a mammogram and ultrasound she had earlier that day. Results that indicate she may have breast cancer. Terra’s issues with her breasts leaking blood during DWTS shouldn’t have been pushed aside, she admits.

In tears, Terra waits for Joe to process the news, which he does by reassuring her that it will be okay. But Terra feels guilty for not getting herself checked out earlier, and she dreads calling her mom or Joe’s mom (who is a cancer survivor herself). “This is supposed to be the beginning, not the end,” laments Terra.

Out at a dog cafe (oh, hello there, LA!), Christy and Todd confront Autumn about her London boy (after discussing Christy’s many issues with Briana Renee, of course). Hey, speaking of Briana! Autumn straight up channels her when she freaks the f**k out on her ‘rents after they question her guy. Oh man. Please do not get a “Bonnie” tattoo, girl. BEGGING you! (Seriously.)

At lunch, Tonya tells Jasmine all about her Little Boss Body launch, which she wants done tight and right. Jasmine reminds Tonya that there will always be haters, but she should hold her head up high anyway. Tonya congratulates Jasmine on being selected as godmother to Elena’s twins, agreeing that Terra likely wouldn’t have time to prioritize Elena’s boys. But she knows there’s a storm a’comin. And it’s name is Terra Jole.

Christy is at the doctor getting a followup procedure to her botched neck surgery that involves a spinal tap – ouch! The damage to her artery that occurred during surgery has saddled Christy with a host of varied problems. And she’s hoping the doctors can get to the bottom of what’s really happening inside of her body. Christy has been a piece of work over the years (as have all of these little women), but damn. My heart goes out to her. She’s got to be in some major fear about this mess.

Cut to a couple who make it very difficult for anyone’s heart to go out to – Briana and Matt Ericson [Grundhoffer]. In the matter of their baby son, Maverick, and his ongoing health issues, well – that’s a different story. Poor little guy may need surgery, which Briana and Matt discuss as they attempt to order an oxygen system (is that what they ordered?) at a local medical supply store. Briana, who has exiled every friend and family member in the tri-county area from being in her life, is grateful for her recent talk with Terra, who empathized with her worries. She is not grateful that she’ll be running into Christy at Elena’s post-baptism party, though. And neither is Matt – who ironically doesn’t comprehend that HE is actually the person NO ONE wants to run into. Like, ever.

But back at Christy’s, she certainly isn’t sweating Briana. She’s more concerned with health – hers and Todd’s – and with Autumn’s drama. It’s also hard having her parents live with her, which she confesses to her mom openly. Her mother understands that it’s a battle of wills, and agrees that there’s a lot of compromise involved on both of their parts. She also knows that their presence causes tension between Christy and Todd. So, are they moving out? It seems like that’s where this conversation is heading. Yup! Time to go, says Christy’s mom. But she can’t make any promises that their moving out will fix whatever issues lie at the root of Todd and Christy’s marriage. Wise words. 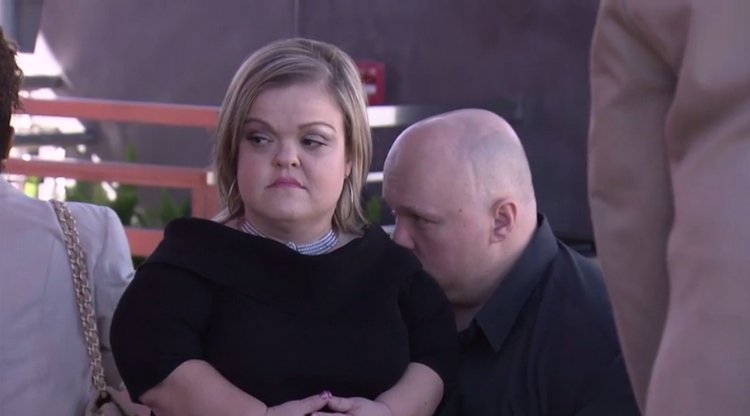 It’s the day of Elena’s party! After the baptism, which Elena wanted to keep private, the guests assemble . Question: Wouldn’t Terra realize that she and Joe aren’t the godparents BEFORE attending a post-baptism celebration? Elena didn’t feel like telling them, so I guess not. (Plus, cameras likely weren’t around before this, so…nope!) Something else not being told yet? Terra’s breast cancer scare. She wants to wait until a more appropriate time to share such heavy news, which is kind of a shocker, given her usual tactics. Good for her.

Briana decides to bring the shade though, b*tching about Christy before she arrives and telling everyone how they didn’t bring Maverick today because they don’t want him around Christy. Because Maverick has such deep issues with that chick. <eye roll> 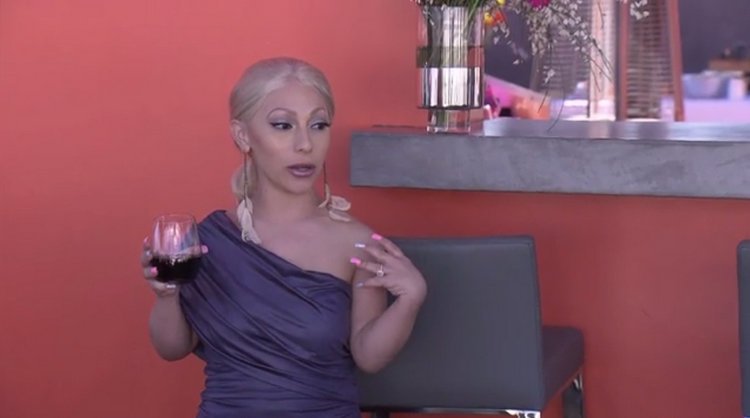 After Tonya and Kerwin finally arrive to round out the group, it’s time for Jasmine’s toast. It goes a little something like this: “I’m the godmother!!!” (Ok, it was way more eloquent, but that’s basically what Terra hears.) Immediately freaking out, Terra snarks, “Seriously, Elena? Seriously?” But Elena doesn’t feel like she owes Terra any explanation.

“I’m done. I’m done!” barks Terra, calling Elena “dumb” before stomping off, leaving everyone else stunned into silence. Except Tonya, who of course scurries after her. Elena doesn’t understand what Terra’s damage is – or at least she claims she doesn’t, eventually also chasing after Terra to demand an explanation. Back upstairs, Elena complains that Terra ruined her kids’ party. What she doesn’t realize is how she 100% contributed to the total garbage situation, though. And that is just plain dumb, quite frankly.

Moving on, we cut to a scene days later in which Terra, Jasmine, and Tonya hang out oceanside. It’s time for Terra to reveal her troublesome health news, which she eventually does as they sip coffee on the pier. But first, she blames her overreaction at Elena’s baptism party on personal strife, and actually apologizes to Jasmine for “coming off” as disrespectful to her. Though she’s still mad as hell at Elena! Make no mistake. She just can’t believe their friendship is this broken. Already feeling betrayed and blindsided, Terra also can’t believe it when Tonya admits she already knew about the godparent business!

No matter though, because after Terra confesses her cancer scare, trivial sh*t doesn’t seem as important. Tearing up, Tonya legitimately looks pained to hear the news. And whatever is going on with Terra, health-wise, god knows Tonya will at least be there to support her. To be continued…

TELL US: DID TERRA OVERREACT AT ELENA’S PARTY? OR SHOULD ELENA HAVE GIVEN TERRA A HEADS UP BEFOREHAND?