Guess who now owns the word “fierce?” (Well, besides the year 2005.) Terra Jole owns it, dammit! And she makes Briana Renee’s head spin when she reveals on this week’s Little Women: LA that she’s using it in her upcoming book title. That’s right, ladies and gentlemen. We are now witness to an argument about who is and is not fierce. Wait – can we abstain from the vote? Or redefine “fierce” as: Without boundaries, self awareness, or the maturity of a fifth grader? Because then, I will gladly get on board.

But last week’s mess still looms large over the group, as Christy McGinity Gibel gets wind of Terra showing her video all around town. As a result, Christy firmly draws a line in the sand, stating that she will not now, nor EVER, sign that book release Terra was waving in front of her face. So Terra will just have to rely on everyone else’s dirt to fill the pages of her “tell-all.” Hmm. It would seem Briana and Matt Ericson [Grundhoffer] could provide sufficient content for a trilogy, so my guess is that she’ll be all set, right?

We begin with Elena Gant and Jasmine Sorge out shopping for baby clothes. Elena and Preston’s twins are outgrowing their clothes quickly – and they’re all outgrowing their house. But baby talk is cut short in lieu of rehashing the drama among the ladies. Jasmine is glad she and Tonya Banks are good again, but she and Elena are both weirded out by the video of Christy that Terra showed them at Penny’s party. Elena sees the sh*t stirrer that Terra is and doesn’t blame Christy for making a questionable video back in the day for a buck. She does wonder what this means for Terra wanting Christy to sign that release, though. 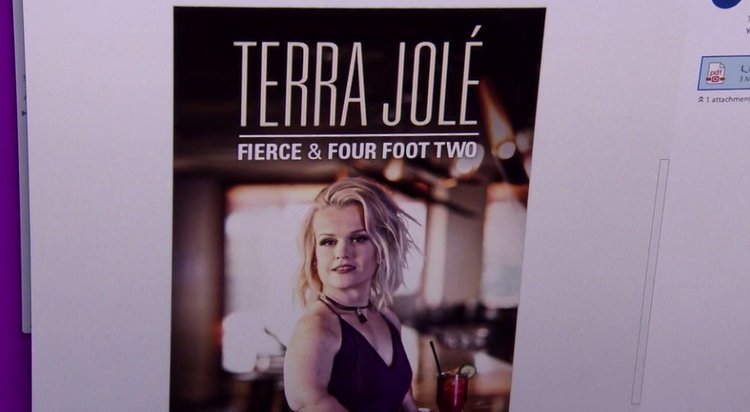 Speaking of Terra’s book, it now has a title: Fierce At Four Foot Two. Jasmine points out that Briana, who’s all about her “fierce mama” hashtag on social media, will be pissed at Terra’s use of the word. Elena basically laughs in Jasmine’s face about this ridiculousness. No one can copyright a damn word, people! But Jasmine sees a problem and plans to talk to Terra about it. Elena thinks she should let Briana fight her own petty battles. And she is right.

At Christy’s house, Todd is recovering from gastric sleeve surgery. He’s in pain, but his spirits are up and he’s on the road to better health. Already having lost 30 pounds, Todd sees success in his future. He also regrets how limited his life became due to his weight. Christy agrees, hopeful that he – and their marriage – will take a turn for the better. “I’m free now,” Todd says through tears. He’s been given a gift and appreciates his new lease on life. Aww. #TeamTodd

At an oxygen bar, Briana and Matt strap themselves to tanks and discuss Briana’s anxiety. Her “modeling career” is not going anywhere and – before she can get out another word – she breaks down in nervous tears about how depressing her world has become. She doesn’t feel like she has the will or drive to do anything anymore, and now that the modeling door is being slammed shut in her face, she doesn’t know where to turn. Or how to support her unemployed husband, I’d imagine. She’s also stone cold jealous of Terra’s success, which is eclipsing hers hardcore these days.

Elena and Preston are house hunting, which is always a challenge for little people – and for Elena, specifically, who has caviar tastes. The property and the view are beautiful, but a two-story house will be a challenge for Elena and Xavier, her son with dwarfism. Despite this challenge, they love the house. Maybe an elevator can be put in? Preston seems to think so, and as always, just wants his bride to be happy. Because he is a freaking SAINT.

At lunch, Briana meets up with Terra to pick her brain about how to make it in this business. Terra thinks Briana needs more confidence and thicker skin. Essentially, Briana is incredibly insecure. So Terra decides to add to her insecurity by revealing that she has B.O! Oh. My. Lord. Is this really happening? Yes, yes it is. Terra tells Briana that she borrowed a shirt from Tonya last year that came back stanky. Thus, Tonya doesn’t want Briana’s body near any of her clothes, going forward. And that’s why she didn’t invite her to model in the fashion show.

Stunned, Briana just sits there like a statue. Then she defends her hygiene because – what else does a chick do in this f–ked up situation?! She’s like, “I shower.” But that’s not really a winning attribute to list on one’s modeling resume. So.

At a “sound bath,” Tonya and Jasmine get their zen on. Well, not really, because Tonya is not all about this new age hocus-pocus with gongs and thrumming. It’s more migraine inducing than relaxing. Afterward, Jasmine tells Tonya that she wants to support her more, so she’s inviting all of the ladies to a Warrior Dash, which is a muddy obstacle course at which everyone can showcase Tonya’s new activewear line. Wait – even Briana? Maybe if she purchases her own clothes?

Jasmine and Tonya then discuss Christy’s video. And the truth about its source comes to light: Tonya found it and sent it to Terra, but she claims she didn’t know Terra was going to use it against Christy. I’m gonna go ahead and push my bullsh*t button on that one, Little Boss. Are you NEW here? Just stop with your empty claims and shallow defenses. You knew exactly what Terra would do because you know Terra! 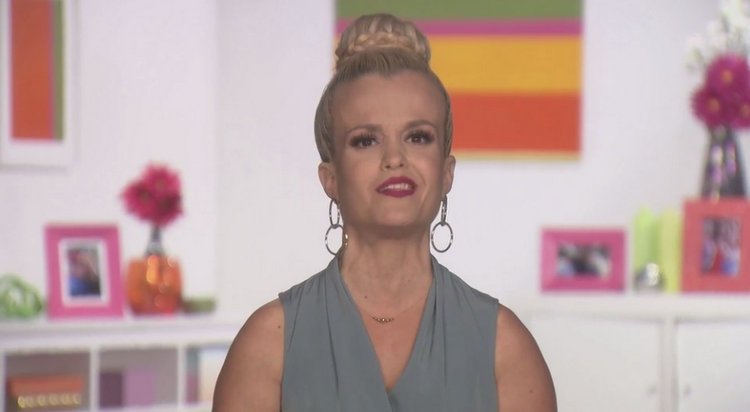 Out furniture shopping, Terra tells Elena that she’s sick of Briana being a doormat – and being Jasmine’s “puppy.” Elena doesn’t necessarily agree, but doesn’t defend her either. She does question why Terra is going in on Christy over some dumb video she made years ago, though? Terra has some prepared answer about being “offended,” but her lame a$$ protestations don’t hold water, and even she has to see that.

Because she’s feeling guilty, Tonya visits Christy to confess that she is the source of the video resurfacing. “Why didn’t you tell me?” asks Christy. Tonya has no answers, but Christy respects her for telling her the truth. Christy isn’t ashamed of her past, and she wonders why Terra would bring something so petty up at her daughter’s birthday party? Especially since Terra has willingly been a part of many so-called “shameful” representations of little people over the years in pursuit of a career. Christy also isn’t about to sign any damn release for Terra’s book! Terra can tell her own stories. Christy’s are off the table. “She can take that release and shove it up her big, fat, white, Akon a$$,” she declares. 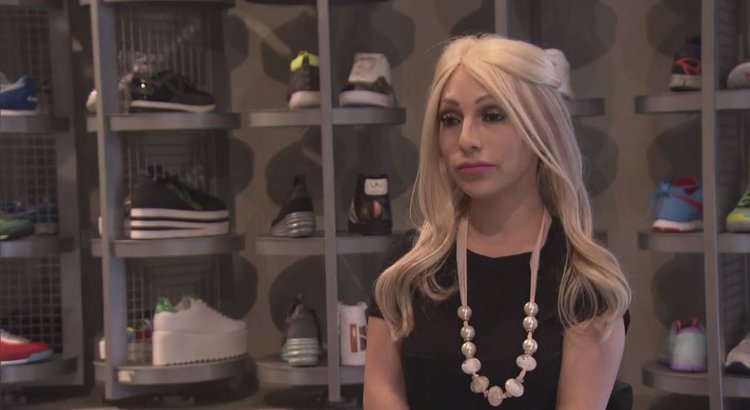 Shopping for boots, Briana tells Jasmine about that not-so-fresh feeling that Tonya is accusing her of, by way of a not-so-fresh smell. So when Jasmine invites Briana to her mud run, Briana agrees to go, but she will not be wearing Tonya’s clothes! Hmmmph! She shall stink up her own shirt, thankyouverymuch.

Jasmine then decides to tell Briana that Terra has hijacked her almighty “fierce” title. Briana wonders if Terra’s taking a jab at her. “Are you that naive?” wonders Jasmine, who may want to remember that this woman fell for an online troll, decided to marry him despite his sketchy past, stayed with him through a virtual explosion of d*ck pics, and is now imagining herself to be a MODEL. 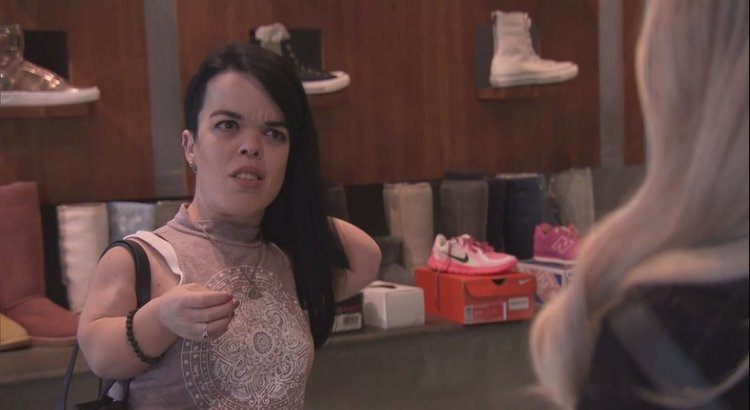 Briana knows she doesn’t own the word fierce – Shakespeare does. Bwahahahaha!!! Okay, let me gather myself. Briana’s hashtags are sacred, and apparently, they are also Shakespearean. Well, this show is a comic tragedy. But other than that, I don’t know how the Bard’s work enters into this conversation?

Anyway, on to other fronts! Terra and Tonya meet for lunch, where Tonya reveals that she met up with Christy. And Christy ain’t signing no release. Terra isn’t surprised, but she is miffed that Tonya tried to get the job done. It’s HER job to bully people into signing their secrets away – not Tonya’s! Tonya reminds Terra that putting Christy on blast with that lame video wasn’t the best move if she wanted to win her over. Terra’s like, meh. Whatever.

In an effort to get their butts in gear for the Warrior Dash, Jasmine and Terra work out on some crazy machines in the middle of the woods (???). Jasmine admits that Briana confessed the truth about her “stinky situation,” which totally embarrassed her. Jasmine feels bad for Briana and doesn’t understand why Terra has to go in so hard on her – and everyone – in the name of honesty.

In this spirit of honesty, Jasmine decides to call Terra out on using “fierce” in her book when it’s Briana’s hashtag, yo! Rolling her eyes, Terra also invokes Shakespeare as the owner of the word. Which, again, I have to pause for a moment to openly laugh at. These chicks are either 1) Not very bright, or 2) Educating themselves exclusively on Twitter. Jasmine blathers on about the issue, but Terra doesn’t give a crap about Briana’s so-called claims. “Has Jasmine lost her marbles?” wonders Terra. Possibly. (Was it Shakespeare who stole them?!?!?!) “I can’t talk to you,” barks Terra after Jasmine bizarrely makes this fierce thing HER fight. “I’m out.” Desperate and messy, thy name is Jasmine. 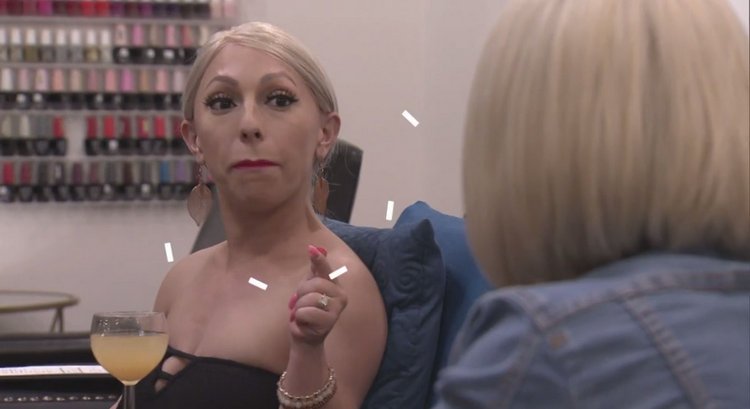 Elena and Jasmine meet up for a pedicure, at which Jasmine continues her inane b*tch session about this “fierce” stupidity. Elena can’t believe Jasmine is sticking her nose in this business, nor why she has to be Briana’s “mommy.” Briana can fight her own battles. Jasmine thinks Terra is Enemy #1 though, and everyone needs protection against her. But now that Elena is friends with Terra again, she doesn’t want the boat rocked in the name of this petty drama. And if it does need to be rocked, well then, Briana and Terra can do it on their own. There’s no need for the entire group to jump in that particular toilet bowl. 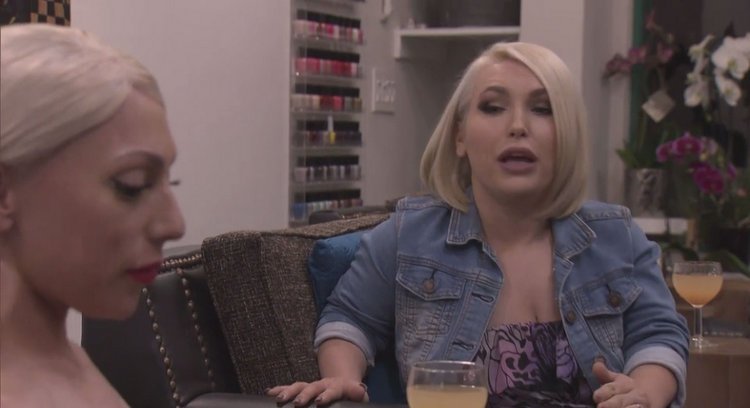 Jasmine cannot or will not see Elena’s point, however. She’s Team Briana now, for better or for worse. So, she’d better get used to being on the outs with a whole lotta people! Because #LittleFierceMama doesn’t play well with others. Nor does Terra.

TELL US: IS TERRA ‘STEALING’ THE FIERCE TITLE FROM BRIANA? IS JASMINE INSTIGATING DRAMA OR SUPPORTING HER FRIEND?

From bad to worse.  It seems safe to say that Little Women LA star Christy Gibel and estranged husband, Todd Gibel, are officially done.…
4 years ago