Let’s just state it plainly: Matt Ericson [Grundhoffer] is THE WORST. And Briana Renee is pathetic. Last night’s Little Women: LA revisited both of these long-held truths as Matt was once again caught cheating, this time with a guest in the very same Alaskan hotel his wife was sleeping in several floors up. Terra Jole is delighted to have the heat taken off of her, given the ridiculous tantrum she had last week over Christy McGinity Gibel existing. But she is at least confronted about her bullying ways before the story shifts entirely in Matt’s disgusting direction. So, are we taking votes on who’s the most vile now? (I will always and forever be casting my vote for Matt’s – it’s a matter of principle at this point! I cannot take him smarming up my damn screen for one more minute!)

We begin by reliving Terra’s meltdown, which no one should really have to witness twice. After Tonya Banks practically tries to tackle her into submission and Jasmine tells her to “calm the f**k down!,” Terra finally stops screaming long enough to get back down the mountain. But she wants to remind everyone that Christy is “FAKE FAKE FAKE!” before she stomps off. No one cares anymore, though. Especially since they know what this is all about: Christy not signing Terra’s book release.

In another corner, Elena Gant, Jasmine and Christy talk about Terra’s mania. Elena just wants peace, even if it means Christy signs that damn release. But that ain’t never gonna happen. So, have they signed up for an entire trip of Terra lashing out? Probably.

The next morning, Tonya invites Christy out for some snow shoeing, hoping she’s okay after Terra’s attack. She also wonders why Christy trotted out that “home wrecker” comment? Christy doesn’t offer details, just defending instead that she’s sick of walking on eggshells around a tyrant. Terra is on a continual 25/7 attack campaign against her, so she’s going to attack back. Tonya wants peace, but she’s not Terra’s handler – she can’t control the crazy. Against Christy or anyone else. Tonya gets it. Terra’s been attacking EVERYONE, and it needs to stop – no more excuses. And what about this trip being all about “reconnecting?” Tonya may have to be the Terra Whisperer after all. Because they’ve got a rabid dog on their hands, yo!

At the Alaskan Native Heritage Center, the entire group gathers for a tour. They all manage not to scream at each other in front of their lovely host and her sweet baby, but Terra can’t help but pull Briana aside to dish about the antics of last night. She received panicked texts from Briana in the middle of the night because she was looking for Matt – after a fight in which Briana said she was “done” and wanted a divorce (because he was drinking/wanted to party and she didn’t). Then he never came back! Until morning, that is.

Briana of course takes all of the blame for their fight and for Matt’s behavior, as she’s been trained to do. Then she explains the scenario that went down: She found Matt in the hotel bar at 12:30am sitting next to a woman, then he went on a “3-hour walk” . Briana called all over the place, but couldn’t find him. He finally came home at 4am. She delusionally still holds out hope that he wasn’t cheating on her. I hold out hope that a bear eats him on this trip. The fact that he was not mauled to death in Alaska just proves there is no justice in this world.

But wait – it’s all okay! Because Matt and Briana had the “best make up sex ever!” when they awoke. (Omg, GAG.) “Maybe this is just the new start we needed,” says poor, dumb Briana. She needs to be removed from her home. With her children. This dude is NEVER going to change. And by the way, how in god’s name is he finding women in every state to cheat with?!?!? I need answers.

Back inside the Heritage Center, the group hears about Native practices and eats a sampling of food. As Todd’s first week eating solid foods, this is an auspicious start! Terra and Joe ask Kerwin if he’s going to put a ring on it soon? He jokes that Tonya wants too big of a ring, so he’s got to slow his roll on popping the question.

In Briana and Matt’s room, they’re all hunky dory now! They eat room service and several side dishes of denial to hit the “reset” button. Briana just wants to keep her man by any means necessary, even listening to Matt defend his idiotic behavior as HER FAULT. She pushed him to it – whah! Doesn’t she realize his itty bitty feelings were hurt? Plus, he reminds her of the great sex they had when he finally came back. So, solid relationship. (Grooooaaaannnnn.)

Day three in Alaska means snowboarding for most, skiing for Christy. The ladies are good sports on the slopes, even if they take a few spills here and there. After they tire out, Elena, Jasmine, and Tonya sit down for coffee and to discuss the Terra/Christy situation – which is really a Terra/Terra situation. They agree Terra needs an intervention, electing Tonya as the group ambassador. Girl needs to be put in check, period. Tonya agrees.

Before that goes down, Terra and Tonya take a peaceful helicopter ride to the top of a glacier. It’s stunning and a once in a lifetime experience and – oh wait – it that Matt schtupping a waitress in the pines? Kidding! (Not really.) At the top, the gals talk about Tonya getting married – does she really want a huge ring? The answer is yes, but it might not really be about the ring. It’s about Tonya being scared of getting married again, and Terra knows it.

Time for the intervention, part one! Tonya explains how Terra’s gotten nasty with everyone in the group this year, and she needs to calm the f**k down. Instead of listening, Terra hears her trigger word – Christy – and pops off about how much she hates her for that police report. Tonya reminds her friend that she’s got her back, but the group is turning against her and she needs to realize it. Jasmine and Elena plan to talk to her on their boat ride later, so she’d better be ready to listen. 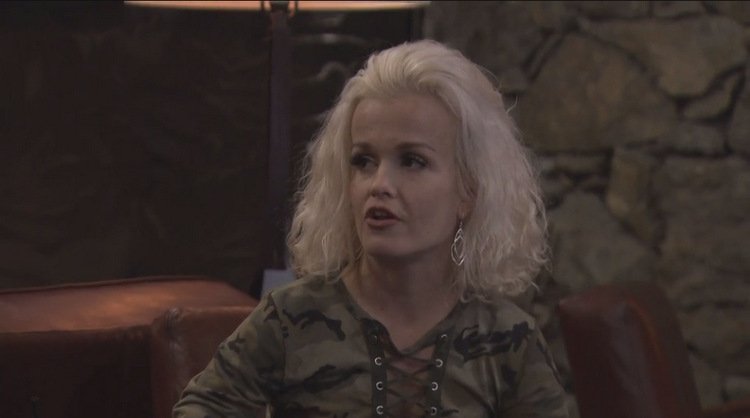 Back at the hotel, Terra tells Tonya she has new intel on Matt: She heard that people saw him in the bar with a woman, then went to the bathroom with her for a long time, finally going up to her room with her. Tonya is shocked, which is kind of laughable considering who they’re talking about. OF COURSE HE CHEATS ON BRIANA. (Has anyone on earth not gotten this memo yet – well, except Briana?) 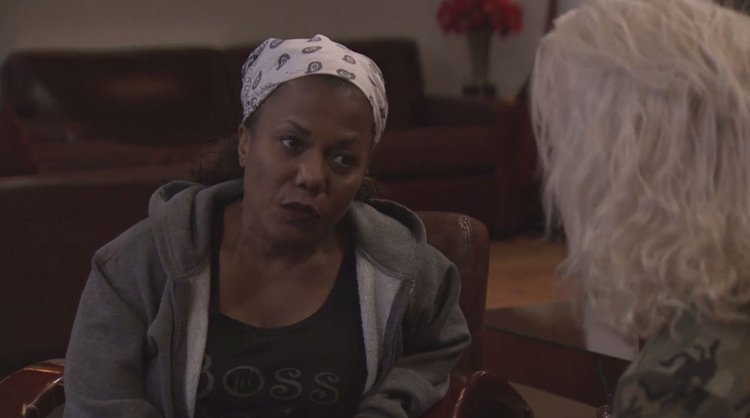 Tonya doesn’t know if Terra should tell Briana this dirt, though, because Briana always shoots the messenger. Terra doesn’t care; she’s going to spill it all. And I am here for it.

Time for a boat ride! And time for Elena and Jasmine to lay all of their issues at Terra’s door. Before that, Christy and Todd take a moment to enjoy the scenery and to celebrate Todd’s new lease on life – and Christy’s, since she’s recovering from a troublesome surgery of her own. Aww. Happy for them! 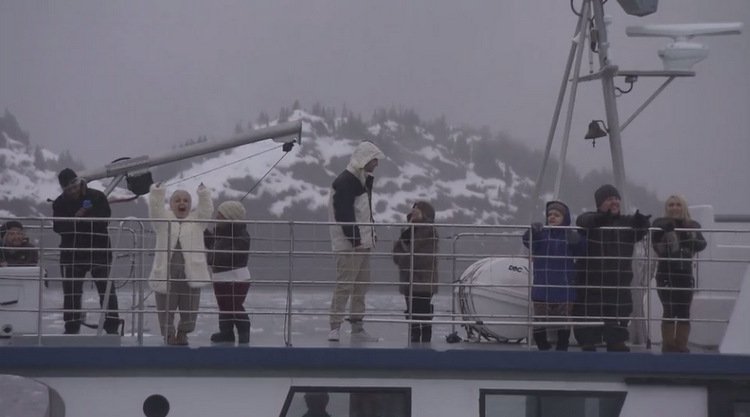 Even though most of the group are exhilarated by the scenery, Terra feels only negative energy. She pulls all of the ladies aside to explain what she’s heard about Matt. So, looks like that Terra intervention has been canceled! (As Elena wisely notes.) Terra shows Briana a photo of the woman she saw Matt with, and Briana confirms it’s her. Where she got the photo isn’t asked though, which is strange. But there’s no time for that, as Terra continues to reveal the entire despicable tale. 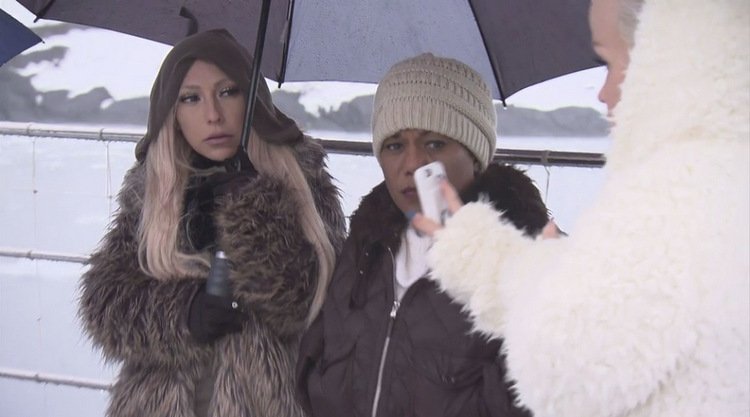 At the end of her story, Terra reveals that Lifetime producers actually tried to get this woman ON CAMERA. But she refused, telling them they were just smoking pot in the bathroom, then went up to the bedroom. So – production SAW all of this? Did Matt not notice the literal cameras in his face, asking to record his on-site cheating? Oh, he is a special kind of stupid. And evil.

You know, I have to pause here a moment to reflect on all of the harsh criticisms I’ve written about Matt over the past two years. This season, I’ve been wondering (like many) when his true colors would show again, because I’ve never wavered in my disgust. He has been a walking red flag since the moment he showed his purple face and duffel bag, showcasing his epic douchebaggery on that hideous Ride Or Die special, and now reminding us why he still takes home the trophy for Most Likely To Inspire Hatred. If Briana takes him back after this (and we know she will), I am officially writing her off as a lost cause. Fool her once, shame on him. Fool her 42,000 times, shame on #LittleFierceMama. She better rethink that hashtag.

Back to the action. Briana marches inside the boat, demanding Matt tell the truth. Smirking like an a$$hole, he deflects for a second, then flat out denies it all. Next, he turns it on Briana for pushing him away. Because that’s his M.O. Everyone is witnessing this mess, by the way – and no one can believe how he’s acting. (Really? Are they new here?) Then Matt changes tactics, outing the fact that Briana turns on her friends just as much as she does on him. So, he’s trying to rally the troops.

Too late! Because when pressed by Jasmine, Matt finally admits he did indeed kiss BAR LADY! (Which we all know is merely the tip of this Alaskan iceberg.) Briana throws something (a napkin?) at him, calls him sick, and threatens divorce. But in less than a week, we all know that she’ll sadly be back with him. Because she’s anything but fierce, no matter what her t-shirt says.

TELL US: IS BRIANA EVER GOING TO ESCAPE THIS RELATIONSHIP? WILL TERRA EVER SEE THE GROUP’S POINT ABOUT HER BEHAVIOR? HOW LONG UNTIL BAR LADY SURFACES ON SOCIAL MEDIA?