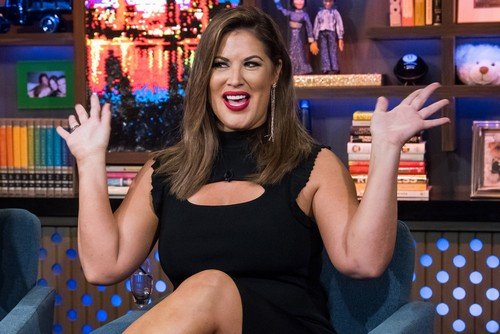 The gloves are off! Newbie Emily Simpson is ticked about the hypocritical way things have been handled with her co-stars when it comes to Kelly Dodd. The Real Housewives of Orange County star doesn’t hold back in her latest blog.

Emily starts off, “I am in no way proud of my behavior at Tamra’s party. I feel like any wife who respects her marriage and her husband would have become as irate as I did.” She continues, “However, I am the ONLY one taking any responsibility for my own actions that evening.”

Emily blasts Kelly over the dramatics, “let’s be honest, for a “death threat” to be actionable, the other party has to have an imminent and reasonable fear that their life is in jeopardy. The fact that Kelly continued to scream, “Hit me! Hit me!” and was laughing means she was not scared for her life. Therefore, Kelly’s constant focusing on what I said that night is simply a deflection from dealing with her own abhorrent behavior.”

She is calling out Shannon Beador and Tamra Judge for ignoring Kelly’s behavior. “I have to say I’m quite disappointed in the other ladies. Did anyone else notice that Tamra, in her last blog, says Shane likes to cause drama when all he did was stand at a table and have a nice, quiet conversation with Steve? Yet she makes ZERO mention of Kelly’s behavior. Can Shane ever catch a break? Is he ever allowed to speak? If he said nothing, he would be attacked for being spineless. If he speaks up, he’s attacked for causing drama. At the very least, it is laughable that the queen of “That’s my opinion!” is telling Shane to stay out of it.” She adds, “Shannon’s blog called me out for my behavior, stating I had poor party etiquette, however, made NO mention of how Kelly acted.”

Emily is confused about the status of her relationship with Kelly Dodd. Emily thought things were all good, but Kelly’s recent blog makes her think otherwise. “I am happy that Kelly and I had the opportunity to sit down face to face and work it out. I truly believe you can work things out by owning your own actions, forgiving, and moving on. I feel that we both said what we wanted to say, and we both took responsibility for our own part in the evening. I even texted Kelly after meeting with her and reiterated how I was happy that we chatted and worked things out. At that time, I truly 100% believed that we had resolved the issue and moved on. However, I am currently unsure as to why Kelly stated in her last blog: “I said it then, and I’ll say it again: He’s a little bitch”. That doesn’t sound like a genuine resolution to me if she is just repeating her behavior, so I’m now left disheartened and confused.”

Tonight is an all new episode of The Real Housewives of Orange County.

“Vicki sets the record straight after Kelly continues to tell stories about Steve to Tamra and Shannon. Gina’s parents visit from Long Island to support her with the divorce. Vicki throws an Italian themed party, complete with a cooking lesson, where the ladies continue to think Gina is being too flippant about her divorce. Overwhelmed by the others doubting her, Gina sneaks off to the bathroom and calls an unexpected person for help.”

Join us in the comments at 9 pm ET to live snark our way through the nonsense!

TELL US – ARE TAMRA AND SHANNON IGNORING KELLY’S BEHAVIOR? HOW DO YOU LIKE EMILY SIMPSON SO FAR?

It’s rare that I say this, but good for Teddi Mellencamp. Against all odds, she went from being the most…
Reality News 6 days ago

Real Housewives of Orange County Season 17 has to be coming to a TV near all of us sometime soon.…
Reality News 1 week ago

Kyle Richards is ready to shut down those pesky Ozempic rumors once and for all. And she’s shedding some light…
Reality News 2 weeks ago