At the close of last week’s Below Deck, our newly installed crew found themselves caught in the middle of a storm of guest drama. And this week, we pick up right back in the thick of it. Charter guests Justin and Terri are at each other’s throats. It’s late. Terri’s drunk and crying. Justin’s pacing around the yacht like a menacing bull. And there’s no one around but Eddie Lucas and Heather Chase to mediate. In an effort to take down the temperature, he practically begs Terri to stop engaging with Justin. Just go to bed already! Eventually they get the guests sequestered in their cabins for the night. But boy is this going to be a good story to tell Captain Lee Rosbach in the morning.

Morning arrives, and it’s safe to say Captain Lee isn’t too happy to hear about the night Eddie and the rest of the crew had. Furious is more like it. Particularly once he finds out Justin told Heather to “go f–k [herself]” and “throw [herself] off the boat.” Respect for his crew and their safety comes first, and disrespecting and endangering them will never be tolerated. The captain promises he’ll take care of it with a come-to-Jesus talk, and he means business. 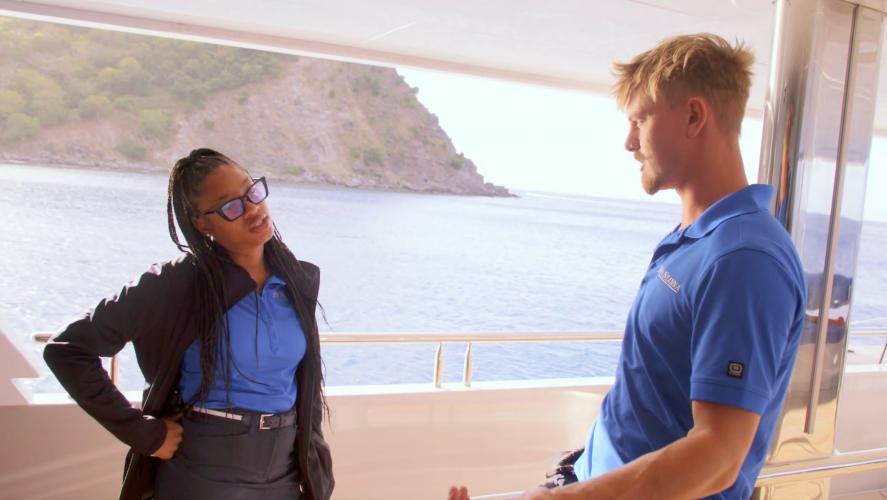 It also happens to be Jake Foulger‘s first day as lead deckhand. And while Rayna Lindsey and Wes O’Dell were initially excited for him, this morning they’re giving him problems. OK, it’s mostly Rayna. She decides to throw a tantrum when Jake tries to change the schedule by keeping her on lates for the rest of the charter. Never mind that it’ll only last, oh, I don’t know, two more days. Or that after that she’ll be on mornings for the following charter. Rayna’s mad about not getting her way. And she’s not afraid to let everyone know it.

Meanwhile, the guests wake sheepish and hungover, afraid to leave their cabins for fear of getting booted straight off the boat. As MY Seanna reaches its anchorage off South Pinney’s Beach, Captain Lee requests to speak to the primary and Justin in the wheelhouse. And they both know it’s basically the equivalent of getting called to the principal’s office. In very few words, Captain Lee lets them know that the kind of behavior exhibited the night before towards his crew will never be put up with again. They’re out of strikes. Sufficiently chastised, Justin apologizes to Heather with his tail between his legs. And she graciously accepts by giving him a clean slate, if only for the sake of salvaging the tip. 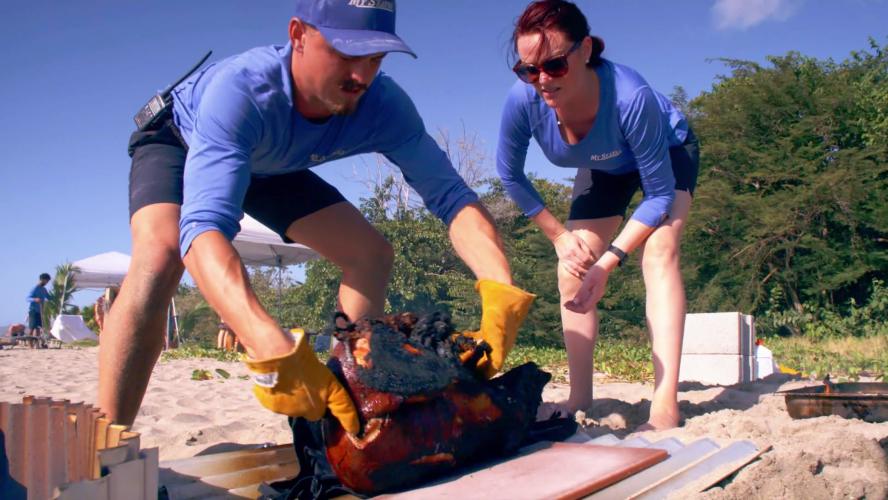 Thankfully, the guests will be off the boat for most of the day, having requested a luau on the beach. And even better, the luau will take place in that elusive, liminal time known as “linner.” Which means hopefully the guests will be too full to have dinner later on the boat. So while Wes, Eddie, and Jake handle the beach setup, Chef Rachel Hargrove pre-cooks a whole roast pig in the galley. (It’s part of the smoke and mirrors of a luau: cook the pig ahead of time and then throw it on the fire as a finishing touch.) Easy, right? Well, it would be except that the pig catches on fire moments before the guests arrive on the beach. Thankfully, Jake saves the day and Rachel solves the problem by simply turning the pig over. If they can’t see it, it’s not burned!

With the guests on their best behavior, the luau is a smashing success. But left behind on the boat, Rayna continues stewing in her anger towards Jake. And by the time the crew gets back from the beach, it’s after dark and she’s in quite a foul mood. The junior deckhand alternates between moping around and whistling as everyone else tries to clear away the equipment from the beach. And when Jake asks her to work faster and calls her out for not pulling her weight, Rayna’s fuse is already lit. She shoots back that Jake needs to “rethink the way” he speaks to her before storming. Which may not be the best way to handle conflict with your direct superior, even if you’ve already made out with him.

Later that night, Jake and Rayna are able to talk out their differences over a cigarette break. But it doesn’t stop Rayna from later complaining to Eddie. The first officer is diplomatic in hearing her out. Though Rayna also seems to exaggerate the conflict, telling him Jake was swearing and shouting at her. Hmm…that’s not what happened at all. And inside the boat, is it just me or is third stew Jessica Albert kind of a complainer? Heather lets her off 20 minutes early to go to sleep because she’s seasick. But over two hours later, the chief stew finds Jessica in the crew mess happily flirting the night away with Wes. 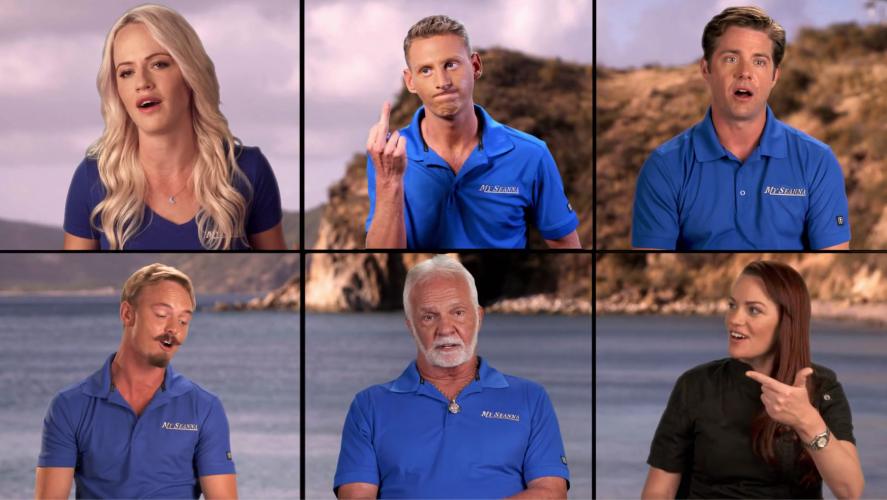 Blessedly, the next morning is departure day. And even though it’s only their second one, the crew has never been more excited to see a charter end. But first, the deck team makes its first fumble of the season. Preparations for docking seem nothing short of scatterbrained and stressed out. And then Wes manages to lose a fender cover as the boat sails into the marina. Sure, it’s just a plastic slip cover. But it still has to be replaced and it’s quite a rookie mistake that certainly doesn’t make the boat look good. Finally, the guests leave with basically the entire crew giving them a big, giant “f–k you” to their departing backs.

Whether out of guilt or humility, the guests still leave a tip of nearly $20,000. (It’s $19,800 to be exact.) That’s enough to make up for the abuse Heather was subjected to on the first night. But $1,650 a piece isn’t bad for a charter everyone basically hated. And while Captain Lee has notes about things to improve — the docking mishap in particular — it can all be handled another day. Because it’s time for the crew to take a well-deserved night off. Interestingly, while they wait for the others to finish getting ready, Eddie regales a few of his new crew mates with the story of how he cheated on his girlfriend with Rocky Dakota back in Season 3. He admits the drama caused him to take a five-year break from the show. But I’m honestly more surprised he’s bringing the whole untoward saga back up for air at all. 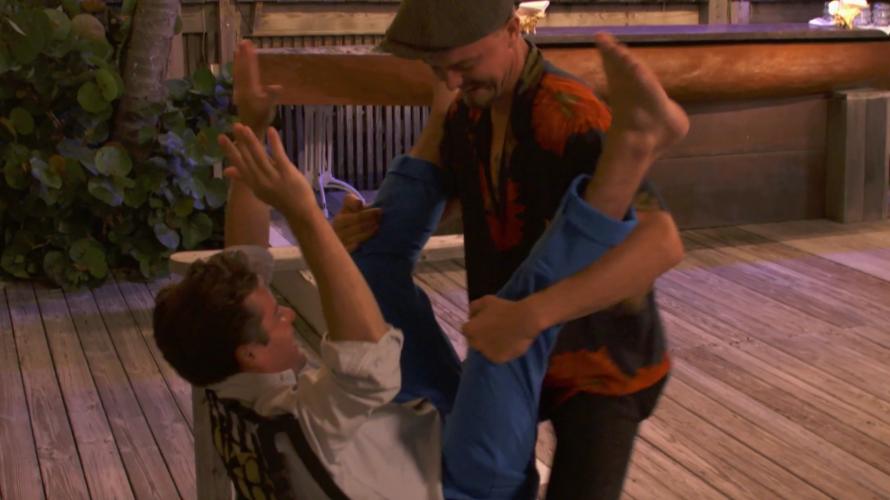 The crew heads ashore for dinner at Spice Mill, where the festivities quickly revolve around a game of truth or dare Jenga. Minus the actual Jenga part. During the game, Wes admits that, out of everyone on board, he’d want to make out with Jessica. (Could this be another boatmance in the making?) Then, as a dare, Jake gives Eddie a very NSFW lap dance complete with simulated, uh, boy-on-boy pegging. The roguish lead deckhand also learns during the meal that Fraser Olender is gay. Because apparently he was under the kind of hilarious impression that the second stew was just “straight but very kempt.”

Heading back to the yacht, the entire gang decides to have an impromptu hot tub party. After getting a little touchy with a very skimpily-clad Heather, Eddie retreats to his bunk to confess to his girlfriend. And suddenly it really does feel like déjà vu of Season 3 all over again. I’d believe we were in some sort of time warp, except that things are happening back in the hot tub that have never happened on any iteration of Below Deck. Namely, Rayna‘s pressuring Jake and Fraser to kiss. And then all of a sudden, the trio are going in for a drunken three-way smooch. Eventually, they’re the last three standing for the night. But right as Fraser’s getting a little flirty with Jake down in the crew mess, the lead deckhand lets slip that he’s…engaged. And all the fun screeches to a halt.

Wait, what?? Rayna in particular is blindsided by this confession. Sure, she may have been talking to Issa when they hooked up on the first night out. But she claims she never would’ve kissed Jake if she’d known he was engaged to someone. Bewildered, Jake makes the excuse that she doesn’t understand the whole story, but Rayna storms off to her cabin before he can explain whatever that story might possibly be. “Did I say something wrong?” he asks as the episode ends. And we won’t find out the backstory to this explosive little detail until next week…

TELL US – DID CAPTAIN LEE HANDLE THE DRAMA WITH THE GUESTS THE RIGHT WAY? IS RAYNA OVERREACTING TO JAKE’S LEADERSHIP AS LEAD DECKHAND? ARE WES AND JESSICA DESTINE TO BECOME THE NEXT BOATMANCE OF THE SEASON? WHAT SURPRISED YOU MORE: THE THREE-WAY KISS OR THE FACT THAT JAKE IS APPARENTLY ENGAGED?

I never want Real Housewives Of Miami Season 5 to end. All of us fans knew it was going to…
Reality News 16 hours ago

Real Housewives of Orange County Season 17 has to be coming to a TV near all of us sometime soon.…
Reality News 1 hour ago

Wow! This week’s episode of Below Deck was full of surprises! For one thing, the mid-season trailer had me completely…
Recaps 2 hours ago

We’ve just been teased with the siren song of Captain Lee Rosbach’s voice on the latest episode of Below Deck. …
Reality News 2 days ago

Captain Sandy Yawn has been filling in for Captain Lee Roshbach on Below Deck this season. Her time on the motor yacht St. David…
Reality News 2 days ago