Below Deck Recap: An Excuse For Sloppy Seamanship

The theme of this week’s Below Deck is “strain.” Strain on the interior. Strain on the deck team. Strain on Captain Lee Rosbach‘s patience. And even strain on every piece of food Chef Rachel Hargrove made in the galley. So much strain! And only part of it was because the co-primary’s jaw was wired shut.

The first person to put strain on the entire boat is Jessica Albert. The third stew wakes up the morning of charter number five and decides she’s had enough. She complains that the workload of making beds and doing laundry is apparently too hard on her body. And pulling Heather Chase aside, she up and quits. Just like that. While wearing her sweatpants. In fact, she’s so eager to get off the boat that she doesn’t even bother saying goodbye to anyone or informing Captain Lee. Just grabs her suitcase out of the hold, packs her things and walks off the boat without a second glance. 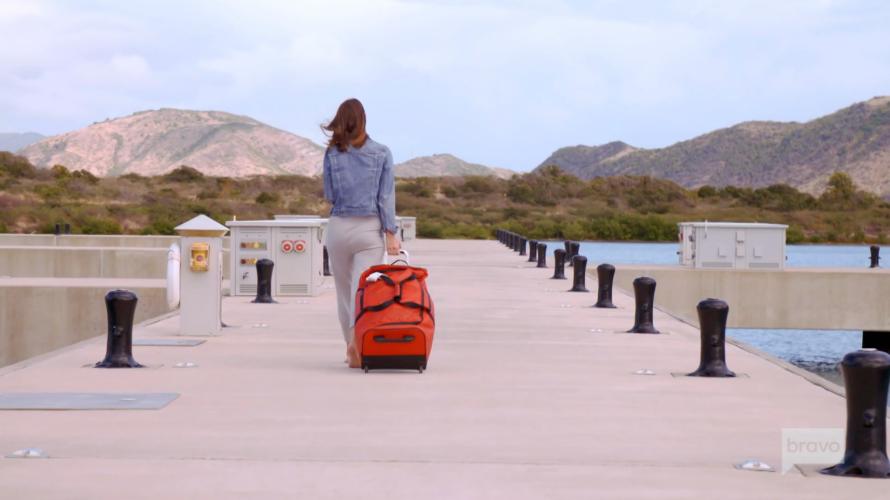 Naturally, this leaves the interior reeling, Heather angry, and the crew down one member for the upcoming charter. Meaning the one that starts in exactly four hours. Real thoughtful of you, Jessica. Thanks for leaving everyone scrambling. Wes O’Dell is gutted to hear his boat crush left. It’s rich hearing about his supposed “connection” with the third stew considering he couldn’t even bring himself to kiss her on their last night out when she was giving every signal short of waving a giant flag. On the other hand, Rayna Lindsey is mad that the closest thing she had to a friend on board walked the plank without telling her. I feel like she’s forgetting that she has her own cabin for the rest of the charter, though?

Even with Jessica bailing, the charter must go on. So after leaving the marina in bad weather, the crew reaches Shitten Bay to await the arrival of their next round of charter guests. And when the guests pull up to the yacht, boy, are they an eclectic bunch. As noted on the preference sheet, the co-primary, Chelsea introduces herself with her jaw wired shut. Thank a pre-vacay bicycle accident for that. What wasn’t listed on the preference sheet was the ninth guest, Sally. Sally is a broom. And not just any broom. A magical broom. Who comes courtesy of a charter guest who serves as the group’s resident Wiccan. So that’s bound to be a whole other thing. 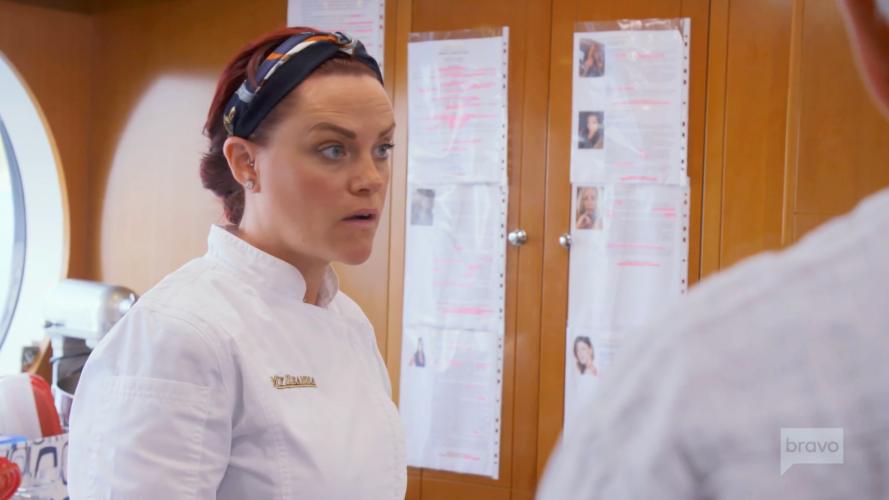 Unfortunately for Chelsea, all of her food has to be liquified and consumed through a straw. This is also unfortunate for Rachel, because it adds an entire, separate step to meal prep for every single breakfast, lunch and dinner. Because the charter guest doesn’t just want run of the mill soups and smoothies. She wants everything the other guests will be eating. But liquid. That means liquid lobster, liquid oysters, liquid eggs in the morning and liquid entrees at night. And…now I’m ready to gag.

That’s not the only dietary condition, either. Miss Jaw-Wired-Shut expects her meals to be served before everyone else in the group. She’s the priority, got it? Not only is this demand illogical, considering Rachel has to make everyone’s food first and then emulsify Chelsea’s meal into liquid, it turns every single service into a logistical nightmare for the galley. But the co-primary throws an absolute tantrum and threatens to have a meltdown when she’s not served her lobster smoothie first, so I guess the chef has no other choice.

Down in the laz, Wes and Jake Foulger decide to spin Jessica‘s departure into a positive — maybe her replacement will be even better! But Rayna‘s more than ready to play the part of Bitter Betty and rain on the boys’ optimism. What she’s not prepared to do, apparently, is her actual job. As the guests spend the afternoon doing all sorts of water sports, an entire jet ski manages to get unclipped and float away into the ocean. All while Rayna was supposed to be monitoring from the swim platform. Thankfully, Eddie Lucas notices from up top and races out in the tender to retrieve the errant jet ski before Captain Lee realizes it’s gone. Because the last thing the first officer needs is another rookie mistake from his deck team in front of Cap. 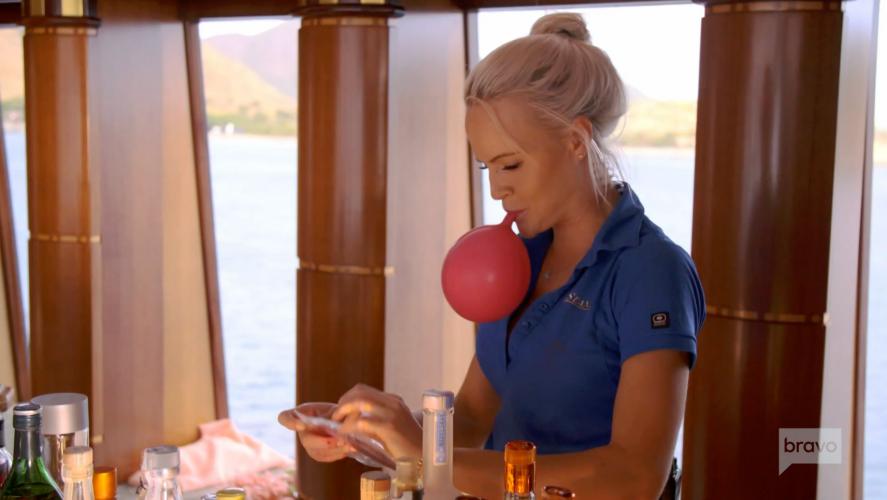 Needless to say, the interior is overwhelmed. The team of two have three parties to prepare in the same night — packing for the beach picnic, pulling off the silent disco and setting up dinner’s pink party theme. They manage to pawn the entire beach set-up off on the deck crew. Rachel convinces Maryland native Eddie to help prep for dinner by dusting off his latent oyster shucking skills. And while Heather‘s in the midst of blowing up pink balloons everywhere, she still has to bounce between making the guests’ oat lattes, asking Fraser Olender to steam a guest’s pink shirt and say yes to every other request made of her.

Later in the day, the unthinkable happens. One of the jet skis gets unclipped. Again! However, this time, there are a few notable differences. First, it happens on Wes‘ watch. Second, Eddie swears he sees the clip undo itself with his own eyes. Could Sally the Magic Broom be cursing M/Y Seanna? And worst of all, this time Captain Lee notices. The first officer insists it was a one-in-a-million fluke accident. But the Stud of the Sea isn’t the superstitious type. Nor does he believe that metal-on-metal can mysteriously undo itself, even after Eddie demonstrates with two clips in the wheelhouse. No, he’s blaming it on the deck team’s general incompetence and lack of attention to detail. 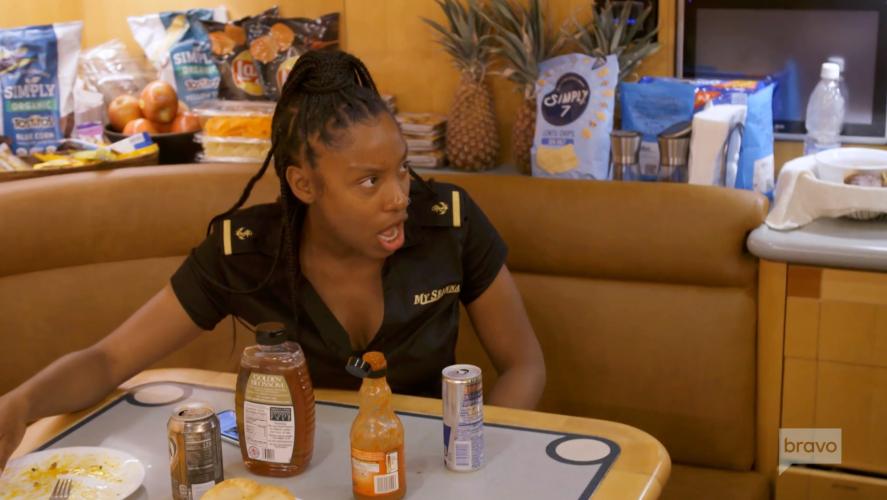 Tired of being constantly reprimanded by his mentor for his team’s endless series of amateur screw-ups, Eddie‘s now in a bad mood. But as the crew gathers for dinner in the crew mess, Rayna is the one who tries to pick a fight with Heather. She’s still angry over the chief stew using the n-word last week, but rather than address that, the deckhand snaps at her frenemy for touching the food with her fingers. And Eddie trying to chide Rayna does absolutely no good. She’s about ready to follow in Jessica‘s footsteps and walk off this boat the first chance she gets.

The only thing that makes Rayna happy is getting to serve as sous chef in the galley during dinner. She says so herself. But while Rayna’s happy, Miss Jaw-Wired-Shut is less than pleased with Rachel‘s first course of cucumber gazpacho. It’s too thick, and needs to be strained more. No problem, right? Heather just sends the offending gazpacho back for an extra run through the colander. But no.

This one little complaint sets off a chain reaction in the galley. And by the time Rachel serves the second course — oysters on the half-shell and stone crab claws — the co-primary is left without a liquid option while everyone else starts eating. Rather than be patient, she slides right back into tantrum mode, and even storms away to her cabin to threaten her husband with another impending meltdown. And that’s where the episode ends! Till next week, enjoy your liquid diets, yachties!

TELL US – ARE YOU SURPRISED JESSICA QUIT? SHOULD SHE HAVE LEFT WITHOUT SAYING GOODBYE? WILL RAYNA LAST THE REST OF THE SEASON WITHOUT HER? IS THE DECK TEAM CURSED? COULD RACHEL HAVE DONE ANYTHING DIFFERENTLY TO ACCOMMODATE THE CO-PRIMARY’S LIQUID DIET?

Uh-oh, the Drake Passage has nothing on these two. Captain Sandy Yawn and Captain Lee Rosbach are probably the most…
Reality News 1 week ago