Below Deck Recap: How Many Deckhands Does It Take?

If Fraser Olender ended last week’s episode of Below Deck annoyed that Jake Foulger and Rayna Lindsey were busy hooking up, he apparently didn’t have any reason to be. Well, not any reason. But maybe half a reason. Because as quickly as cameras caught the two deckhands in flagrante, Jake cut the hookup short. In fact, he retreated all the way out the deck. To talk with Fraser instead. In a rush of guilt, he admits he just thought about his fiancée, Paris, and stopped himself. He may have free rein to be non-monogamous, but there are still some lines the lead deckhand won’t cross.

The next morning is, thankfully, a turnaround day. I’m not sure if it’s because of COVID, but this season of Below Deck has had a different pace with a little more breathing room between charters. And to be honest, I don’t totally mind it. As usual, Captain Lee Rosbach holds a preference sheet meeting for the sixth charter of the season. The new primary is a Navy veteran turned tech CEO and he’s bringing a group of Black couples who all happen to be military vets, too. Their requests are relatively simple. A Mediterranean-inspired dinner here. A party about love and Black excellence there. There are just a few food allergies Chef Rachel Hargrove will need to abide by. But nothing compared to last charter’s demands. 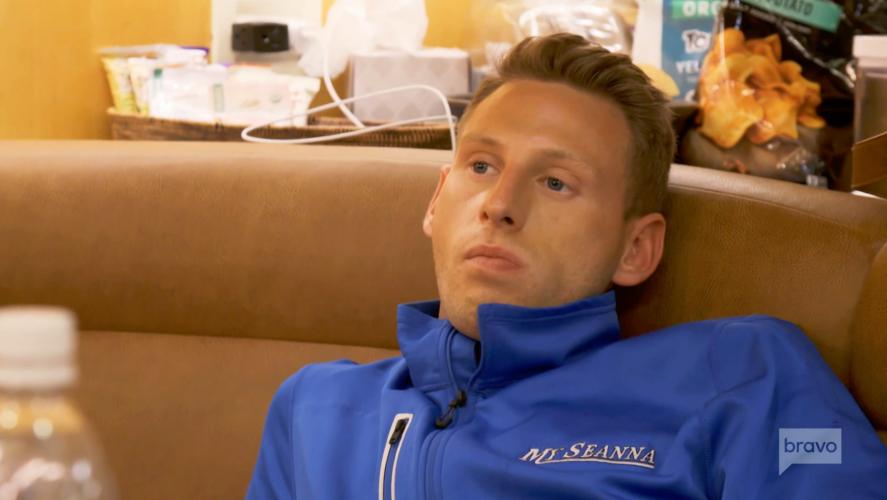 Captain Lee also has news for Heather Chase during the preference sheet meeting. She’ll be getting a new stew, likely some time during the charter. And it’ll be the friend she recommended who worked under her on a boat in Florida. Naturally, Heather’s thrilled at this turn of events. But when she takes it to Fraser during crew dinner, she doesn’t get the reaction she was expecting. Fraser’s immediately turned off by the idea that the new stew already has a working relationship with Heather. Understandably, he doesn’t want to suddenly feel like the odd man out. But the chief stew brushes off his insecurities with the reminder that the new girl is their only option. But Fraser just doesn’t want the newbie to disrupt the interior’s fragile balance.

Pickup day arrives bright and early. And as is the new norm, the crew has to have everything ready an hour and a half before guests arrive because starting charters on anchor is the thing they’re doing now. But it’s worth it for Eddie Lucas because Captain Lee lets him drive the yacht off the dock for the first time. See, there are benefits to his new title as first officer! Eddie does such a good job maneuvering the vessel that Captain Lee even jokes that next time, he can just nap in his cabin. Docking in South Friars Bay, Fraser is still worried he’ll be third wheel with Heather and the new stew, despite Heather reminding him that he’s her right hand man. 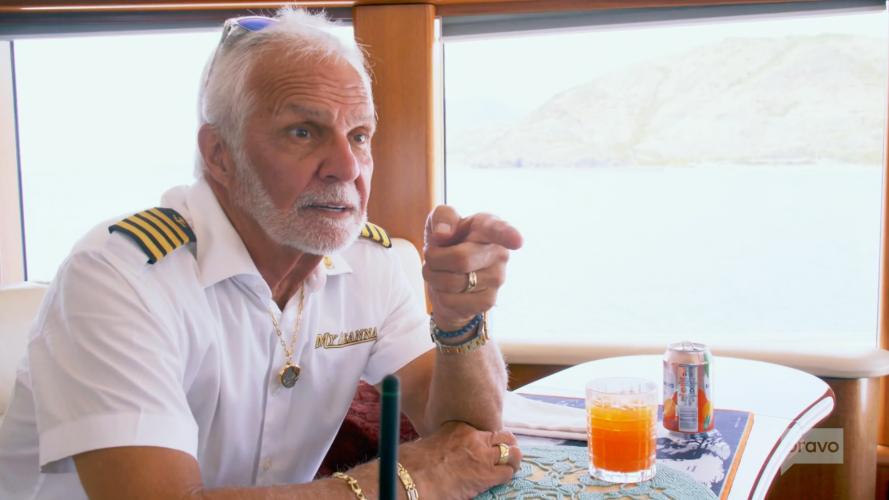 The charter guests arrive and boarding M/Y Seanna is suddenly all pomp, circumstance and salute. I suppose you can take the man out of the Navy, but not the Navy out of the man. After the usual tour of the boat, the primary heads down to the galley to discuss menu and planning with Heather and Rachel. Somehow, some light brainstorming finds the chief stew turning the second evening’s dinner into a full-blown multi-couple vow renewal ceremony. And she even volunteers Captain Lee to officiate. The Stud (or is it Skipper?) of the Sea is more than a little annoyed to hear this. Heather, you never make plans for the captain without running them by him first. That’s like Lee Code 101.

After lunch, the guests spend the afternoon playing with all the water toys. And right on schedule, the deck team makes its first big mistake of the charter. Because you know by now that with this exterior crew, there’s always something. Jake sends Rayna and Wes O’Dell to lunch while two guests are out on the jet skis. With no eyes on them, the pair promptly disappear out of sight. And Captain Lee‘s the one to notice. That’s strike one. Strike two happens when he catches Eddie washing down and fueling the jet skis. A.k.a. menial labor far below Eddie’s rank as first officer. Lee demands the other three deckhands all fuel the jet skis together. And from the wheelhouse catches a belligerent Rayna rolling her eyes. Oops. 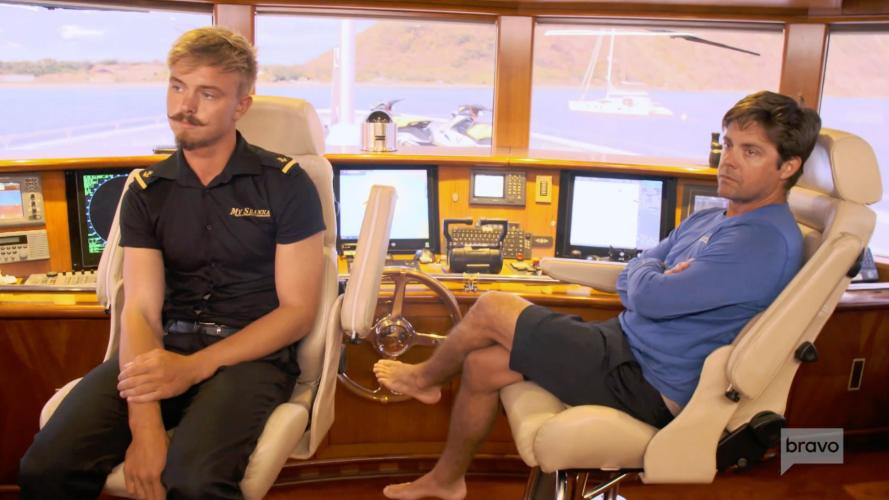 Captain Lee wants to know how long Rayna‘s bad attitude has been going on. And is less than pleased to discover from Eddie that it’s pretty much par for the course on a daily basis. Calling Jake to the wheelhouse, Lee lays into his lead deckhand and first officer about the litany of ways the deck crew has been continually falling short. Rayna’s attitude. Wearing headphones while they’re working. Catching Wes texting on board. It’s late in the season and changes need to be made. Like, yesterday. Jake and Eddie relay this message to Wes and Rayna in the laz. And it’s taken about as well as you’d expect. Rayna’s sour attitude even seems to be rubbing off on Wes a little. Basically, morale in the department is tanking.

For dinner that evening, Chef Rachel has pulled out all the stops for a Tour of the Mediterranean. Which is separate and entirely different from Olive Garden’s Tour of Italy. (I feel the need to mention that we’re clearly in the Caribbean, so it doesn’t make a ton of sense. But just go with it…) The guests have asked Captain Lee to dine with them for the evening, so the pressure is on for Rachel to perform. Of course, the problems start almost immediately. Although there’s a smorgasbord of options, the guest who requested minimal dairy refuses to eat any lamb that’s even touched a piece of feta. And the guest with the shellfish allergy won’t actually eat meat. So she wants chicken. 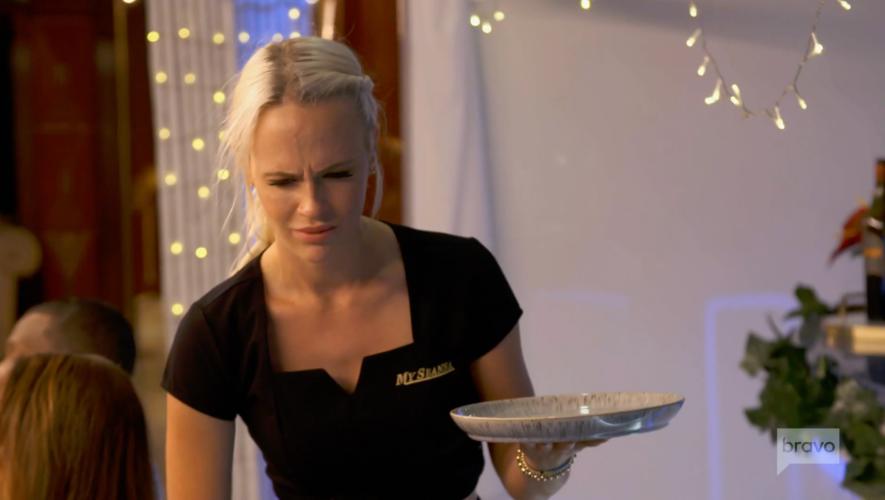 None of this seems to have been on the guests’ preference sheets, and it throws both Heather and Rachel into panic mode. Then, while Rachel’s furiously cooking up an entire, new rack of lamb, the female guest who led the charge rather snippily informs Heather that not only is she massively disappointed with the service, she also won’t be eating for the rest of the night. In protest, basically. It’s like a spoiled child throwing a tantrum, but there’s nothing Heather can do. Plus Captain Lee is watching how she handles the interaction.

Going back to the galley, Heather realizes she’s made a crucial mistake and missed the guest in question’s clearly listed lactose intolerance. Oops. She tries to remedy the situation, but the guest still isn’t really having it. Even Rachel coming to the table to break the tension with her charm and humor barely coaxes a half-smile from her. Yikes. Not off to a great start, but there’s always tomorrow. And it certainly helps that the chef can basically do no wrong in the food department in Captain Lee‘s eyes. 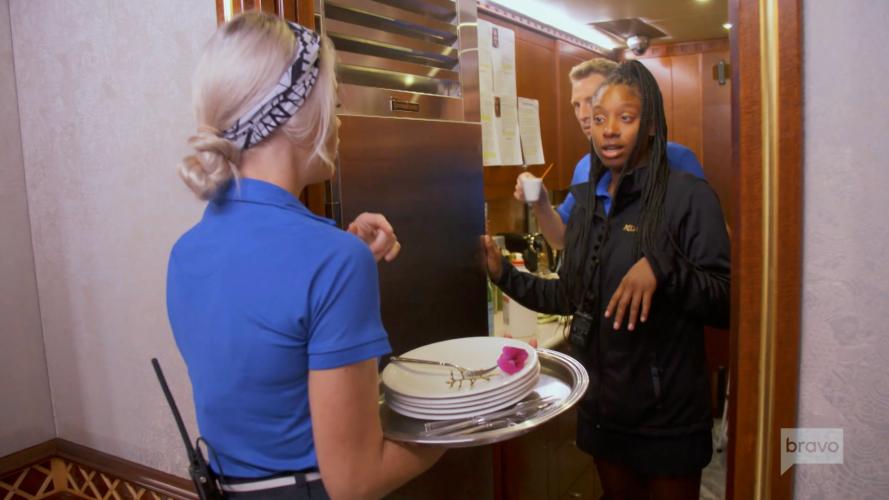 The next morning is day two of the charter. And Captain Lee spent the night doing some serious thinking. He tells Eddie that he’s come to the conclusion that Rayna terrible attitude can’t possibly be coming from nowhere. There’s a reason behind it, and he wants the chief officer to fix whatever the problem is. And in the meantime, let’s give Rayna an opportunity to grow and hopefully earn some positive recognition. So Eddie asks Rayna to do the honor of raising the anchor. Which she does very well. So well, in fact, that Lee pulls her into the wheelhouse to personally compliment her performance.

For some reason, this goes badly. Apparently Rayna doesn’t like positive reinforcement? Because the pat on the back from Eddie and the captain sends her into a flurry of tears. It almost makes, like, no sense whatsoever. Even when the girl is doing a good job, she’s determined to be miserable. She cries to Wes on deck. Then she cries to Fraser in the stew pantry. And when Heather interrupts to ask Rayna if she can help Rachel in the galley, she’s still crying. Somehow, in a twist of fate, this gets picked up on the radio. Meaning Captain Lee and Eddie hear a blip of Rayna’s tears in the wheelhouse. Cap sends Eddie to investigate, and the episode ends just as the first officer is about to knock on the door of Rayna’s cabin, completely oblivious to what he’s about to encounter on the other side.

TELL US – WILL A NEW STEW UPSET THE BALANCE BETWEEN HEATHER AND FRASER? IS RAYNA’S BAD ATTITUDE DRAGGING THE WHOLE DECK TEAM DOWN? WERE THE GUESTS BEING OVERLY DEMANDING ABOUT THEIR FIRST DINNER SERVICE? WHAT DO YOU THINK SET RAYNA OFF AFTER SHE HAULED ANCHOR?

Wow! This week’s episode of Below Deck was full of surprises! For one thing, the mid-season trailer had me completely…
Recaps 3 days ago

We’ve just been teased with the siren song of Captain Lee Rosbach’s voice on the latest episode of Below Deck. …
Reality News 4 days ago

We’re going to make this one nice and neat. We have a show for every night of your work week…
Reality News 4 days ago