Below Deck Down Under Recap: Prom Night At Thalassa High

We’ve reached the all-too-familiar point in this season of Below Deck Down Under where everyone’s starting to get on each other’s nerves. Benny Crawley has little respect for Jamie Sayed‘s leadership as bosun. Aesha Scott and Chef Ryan McKeown can’t stand each other. And cracks are even starting to form in Aehsa’s “friends first” management style with Magda Ziomek. But worst of all is Jamie basically choosing to rebel against Captain Jason Chambers‘ authority. After all, te bosun has no qualms about undermining the captain, calling the deck team together to tell them point blank to listen to him over Jason.

At the same time, Chef Ryan‘s down in the galley whipping up his idea of a “pasta extravaganza.” After the guests complained earlier about not having enough food, he’s determined to overcompensate. And that means he’s making rigatoni bolognese, mushroom risotto, vodka penne, spinach and ricotta agnolotti, semolina polenta and seafood linguini. The only problem is that….none of it’s very good. The risotto is bland. The guests ask for more garlic. Plus, it doesn’t actually solve the complaint of wanting a balanced meal with, oh, I don’t know, side dishes or something. Who would want four kinds of pasta, risotto and polenta for dinner? Another fail by Ryan. 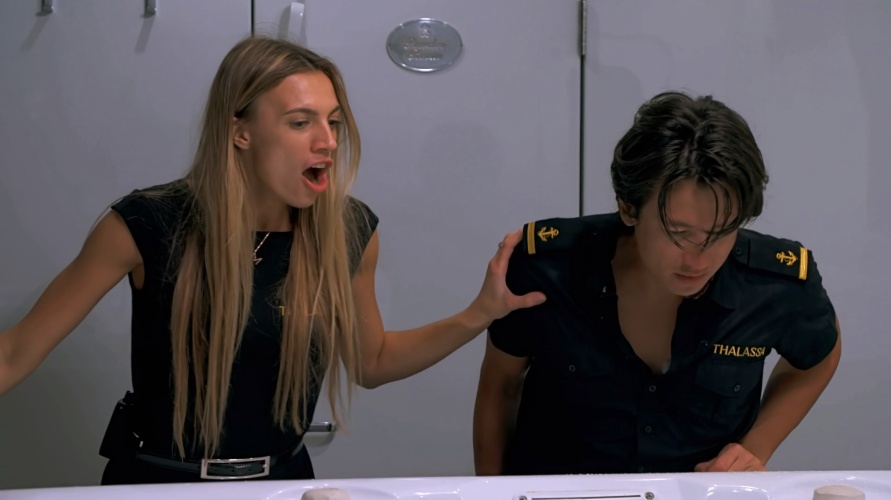 After dinner, two of the guests decide to stay up and hit the hot tub. And that’s when the massive amounts of pasta start hitting them with major ramifications. Yes, I can’t believe I’m even typing this, but I’m talking about about one of the guests throwing up in the hot tub. Absolutely revolting. Magda and Benny are up on night shift, and it takes the pair a second to realize that they’re looking at bits of vomit bubbling in the jets. No, Madga, it’s not leaves from the mojitos. As the deckhand, it’s up to poor Benny to drain the jacuzzi and then fish out the vomit using a kitchen strainer. First the overflowing toilets, now this. I truly couldn’t do it if I was him.

Early the next morning, the scent of throw up is still lingering in the hot tub. And tension starts building between Aesha and Magda when the chief stew starts offering completely unsolicited advice about the third stew’s long-distance relationship. (She overheard Magda and her Polish boyfriend Maciek arguing over FaceTime and took the opportunity to point out how perfect her own relationship apparently is by comparison.) It’s been slowly building, but Magda’s starting to feel a little bit judged by her boss. Not only in her romantic life, but also in the smallest of duties, like making an almond latte. Or serving breakfast without tongs. Or, you know, like, texting on the job. 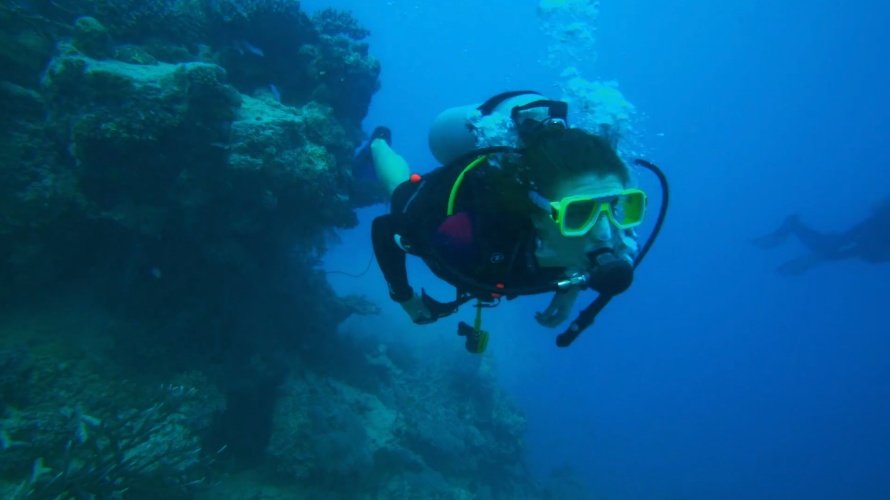 Aesha may be coming down harder on Magda, but she’s getting her own reward from Captain Jason: a scuba diving excursion in the Great Barrier Reef. It’s the first time this season that guests have requested scuba diving instead of snorkeling. And the chief stew got her certification on her last boat, so she’s in luck. Chef Ryan chafes at the special treatment, considering he, too, is scuba certified but wasn’t invited. And that’s not his only complaint, either. The guests have requested a prom-themed party for their second night. And they want to take members of the crew as their dates. So Aesha lets the guests draw crew members’ names out of a hat, but excludes Ryan because, well, someone still needs to cook dinner. But I totally get that feeling left out is never fun. Even if Ryan’s still the worst.

The deck team, meanwhile, is continuing to struggle on this charter. Captain Jason wants the deckhands to start thinking ahead. So he’s pushing them as a way of motivating them to step up. But little, annoying mistakes keep happening. Like him having to ask Culver Bradbury and Brittini Burton to empty out the tender. Or Brittini not knowing how to pick up the port-side anchor. (Hint: she grabbed the starboard remote.) And in Captain Jason’s eyes, all of this falls on Jamie‘s shoulders as an insufficient leader. How are they still making such rookie mistakes? 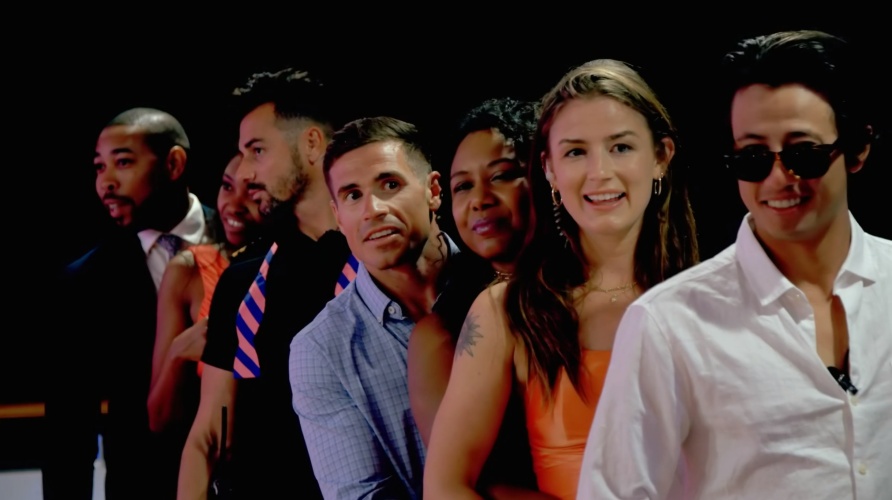 It’s time for prom! And somehow, Aesha‘s managed to rustle up actual prom dresses for herself, Brittini, Madga and Tumi Mhlongo for the night. The female deckhand is particularly thrilled at the theme of the night because apparently, she never went to prom in high school. Less enthused is Chef Ryan, who’s stuck in the galley hearing everyone else having fun upstairs. And to add insult to injury, Captain Jason even goes down to the galley to ask the chef to come take a picture of everyone else in with their prom dates. Ouch.

Unlike a traditional prom though, the crew still has to serve the guests after all the pictures and corsages. So while Tumi‘s downstairs cleaning cabins in a dress, Captain Jason‘s the only one who gets to sit down for dinner with the guests. And he’s not all that impressed by what Chef Ryan‘s serving. This time, it’s not so much the flavors but the overall presentation of the food. The guests requested an Asian feast. But the duck buns are essentially finger food. The bok choy’s served in a bowl. It’s all very confusing and not all that cohesive. Thank goodness the prom-goers are distracted by the afterparty Aesha throws on the sun deck. 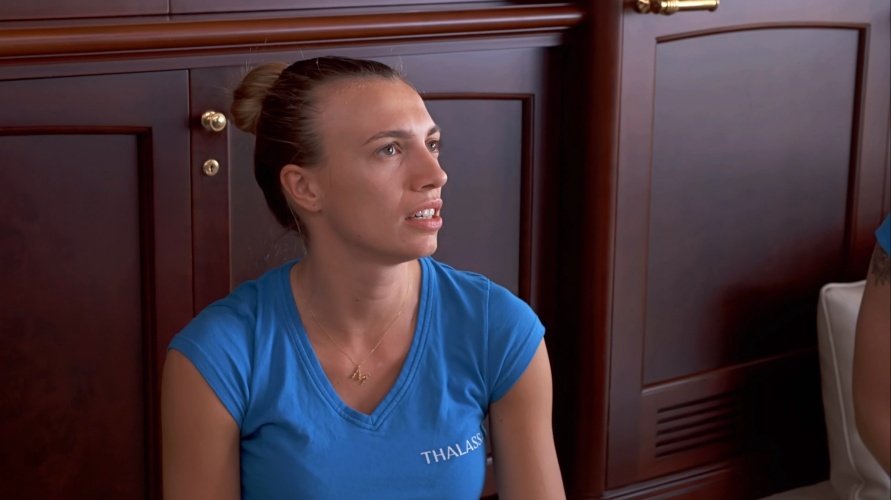 The next morning, it’s the final day of the charter. And Aesha wakes up to a total mess from the night before. Not only is all the prom decor still strewn all over the boat, the laundry room is a disaster too. Magda‘s seriously dropped the ball. To the point that Captain Jason‘s even noticed. He’s also noticed Chef Ryan‘s habit of serving up the bare minimum. But the arrogant chef couldn’t care less about whatever constructive criticism the captain, i.e. his boss, has to offer. He’s not here to cook up Instagram-worthy food. Or apparently make any salads. And he’s sticking to his ways.

After a breakfast of French toast, it’s time for the guests to leave. And on his way out, the primary’s only criticism is…the food. Because of course it is. At the tip meeting, Captain Jason points out that every single department has room for major improvement. But the crew still earned a tip of $16,230 dollars. And the captain awards the disco dunce cap of the charter to Magda. In a follow-up debrief for the interior, the third stew claims she’s improving charter after charter. But Aesha specifically calls out the captain’s issues with what’s happening in the laundry room. And no matter how delicately she chooses her words, the message is received. It’s all Magda’s fault. And she’s officially over it.

TELL US – IS AESHA BEING TOO HARD ON MAGDA? WHICH CREW MEMBER WOULD YOU WANT AS YOUR PROM DATE? DID YOU FEEL BAD FOR RYAN FOR BEING LEFT OUT? WHAT DID YOU THINK OF THE MIDSEASON TRAILER?

The Below Deck Mid-Season Trailer Is Here!

Wooof. Whatever crud has been floating around this flu-season finally got me. Apologies for having missed the Below Deck recap this week…
Reality News 1 week ago