Mercedes Javid is tired of everyone questioning her totally amazing, romantical, perfect relationship to total non-famewhore fiancé Tommy Feight, sick of her mother Vida imposing her negative opinion, and she wants everyone to know Tommy is no gold digger or loser – he’s her man, and she’s standing by him because she’s in love.

After years of drowning her mother’s bad opinions of her life in booze, and sloppily tuning out “best friend” Reza Farahan‘s rude comments, but made out of love and concern (SARCASM), MJ is finally standing up for her own happiness. Or at least all the happiness a Wedding By Bravo can buy! 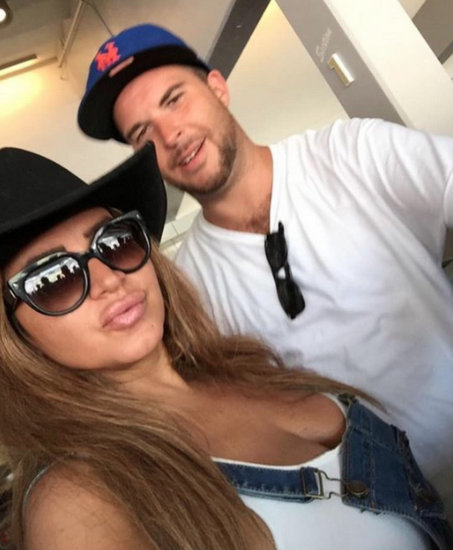 “Here is my man and me. You don’t have to put any money down on this, because it’s not your bet. It’s my life, my love, my choice to roll the dice on love,” proclaimed the Shahs Of Sunset star in an instagram post. The photo – above – MJ chose to illustrate this pro-Tommy diatribe is really um… yeah, convincing. (eye roll).

MJ continued, “People will judge because they will judge. We have known one another for way longer than 5 episodes and Vida never even asked questions before she judged him. #Shocker She is who she is, and bless her heart.”

Apparently despite appearances Tommy is like suuuuuper successful and brilliant, according to MJ. #ConsiderTheSource “For those who need more info than my Mom’s judgmental opinion, he is smart, he is well read, extremely knowledgeable, and extremely intuitive. He has a great head for business and started one long before we met. You can look it up, since its a publicly traded company called Blow and Drive.”

“I’m just letting ya’ll know that I’m well aware of the fact that I’m on a reality show and people will scrutinize every action and every choice. I will speak my opinion on my own life & that of my friends. Don’t expect me not to do that -ever,” announced MJ, a woman in her mid-40’s (and it’s about time she grew the hell up!). “I’m far from perfect and I hope Tommy is the one, but I don’t need more than the fact that we have faith in heaven and the best of intentions. If we’re not meant to last, so be it. I don’t need more than that so if you really do, knock yourself out.”

Well, perhaps MJ should speak her opinion to Jim Marchese. The former Real Housewives Of New Jersey hubby who can never keep his mouth shut (or his hands off twitter), took the opportunity to slam the show and blame a certain Bravo producer for the so-called low ratings this season.

Gee – Jim, we really care what you think. I know Andy Cohen certainly does! Sounds like sour grapes since y’all got fired and all!

TELL US – DO YOU THINK TOMMY IS THE ONE FOR MJ? SHOULD EVERYONE MIND THEIR OWN BUSINESS?

She’s not a regular mom. She’s a cool mom! Or, at least, that’s what Kate Chastain is aspiring for. The…
Reality News 2 months ago

Real Housewives of Salt Lake City is bringing the drama early into Season 3 without the presence of Mary Cosby,…
Reality News 4 months ago

As a viewer from the very beginning, I was so bummed to hear that Shahs of Sunset was cancelled. The…
Reality News 7 months ago

EEEEYYYYYYyyyiiikkeessss. Who saw Shah’s of Sunset being cancelled under these conditions? There are claims that the show, which is produced by Ryan Seacrest…
Reality News 10 months ago