On this week’s Little Women: LA it’s time for the ladies to attack each other in a mud pit. Which seems a fitting metaphor for their storylines friendships, no? While Terra Jole continues to wave her book releases in everyone’s faces, Briana Renee finds herself pretty much forced to challenge Terra on the name of her book, thanks to Jasmine Sorge’s oddly incessant instigation. She also finds herself accused of poor hygiene again, which I still cannot believe is being put on BLAST on national TV (!!!). But guess who gives absolutely zero f–ks about Terra and her precious book releases? Christy McGinity Gibel, that’s who. She’s had enough of Terra’s messy meddling, so she refuses flat out to sign a release – now or ever. Boom.

Back at the nail salon, Elena Gant and Jasmine are still bickering about why Jasmine is trying to fight Briana’s battles. Yeah, Jasmine, why are you suddenly Briana’s dragon? The irony of Briana wanting to claim the “fierce” title, but relying on others to do the claiming for her is not lost on us. Also not lost on us is the fact that Elena and Jasmine can barely get through this totally manufactured fight without giggling and smirking the entire time. They make up in the end, agreeing to disagree. Because Jasmine is the children’s godmother, after all.

Terra’s got a new business venture on the horizon, and this one doesn’t need release forms! She wants to develop a universal baby bottle with handles – much like a sippy cup – for babies to hold who have small, arthritic, or otherwise differently abled hands. It’s actually a great idea and as she pitches it to the manufacturer, they seem impressed. Joe Gnoffo is also impressed, commenting that Terra’s success seems threatening to her friends. Well, can’t disagree there. Terra is a nasty piece of work, but there’s no doubt that she’s the “star” in her friend group, as well as the only one moving forward with actual business deals outside of the show.

But how will Terra get Christy to sign her release after spreading that ridiculous video dirt around? Short answer: She won’t. She feels like she can convince Briana to sign her life away though. Because Briana, much to her own consternation, is not fierce.

At a candy store, Tonya Banks and Kerwin are breaking down the post-fashion show reality: Tonya’s manufacturer is not able to keep up with online orders. So her business looks flaky. Time to buy some more garage storage units? Not yet! For the Warrior Dash will save the day – or so thinks Tonya. The girls have agreed to don her activewear for the event. Tonya dreams that her clothes, which will be entirely covered in mud for 99% of the run, will benefit from this excellent commercial exposure. Solid plan. 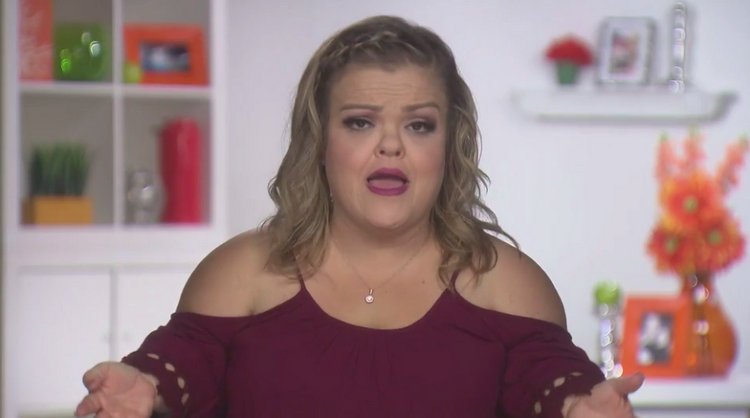 Jasmine meets Christy for lunch, whom she’s grateful to for filling her in on the challenges Tonya was going through. And who she invites to the Warrior Dash to support Tonya’s line. Christy is game, although she can’t participate due to her neck injuries. But she’ll be there to twerk and cheer! Christy is not here for Terra’s mean girl antics, though, calling her out for showing her video at Penny’s birthday party. Given the fact that Terra has done many questionable things for money (including wearing a bear costume with a penis – what the what?!), Christy wonders why Terra feels free to call her out on making a buck. She won’t be signing that release now, even though she was thinking about it prior to Terra’s stupid move.

Back at Jasmine and Chris‘ house, they’re debating the pros and cons of sleeping together. With the new baby, they’re sleeping in separate rooms – one paired with each kid – which every new parent can understand. But Jasmine wants to bring her sexy back! Chris just wants to nail down a railroad job, which looks likely for him now – yay! Jasmine is less than supportive though, wondering how she’ll maintain her salon job while Chris is at work too? (Well, Jasmine, how about you call up the majority of the population and ask them?) Their financial stress does weigh heavily on the couple though, and these decisions are tough. So, okay. I get it.

It’s the moment of truth for Terra, as she summons her minions to tea and asks them one final time to sign her book release. On the hot seat: Briana and Christy. Mealy-mouthed Briana bares her belly almost immediately, agreeing to sign it as long as her marriage is left out of Terra’s Terrible Tales! Terra agrees that she never even mentions the “Matt” word, which should come as a relief to readers of every language.

But Christy’s like, hey, aren’t you the same huge b*tch who just dug up an old video of me and tried to publicly shame me on TV? Nah. I don’t think I’ll be signing a release for you in this life, or the next! Thanksabunch! Thus, a shouting Terra is left at the table after Christy storms off, snarking that’s why “You can’t trust the Crust.” Briana stupidly snickers along. She won’t be snickering for long, though, as her B.O. is about to be called out again in front of the entire group. Yikes! 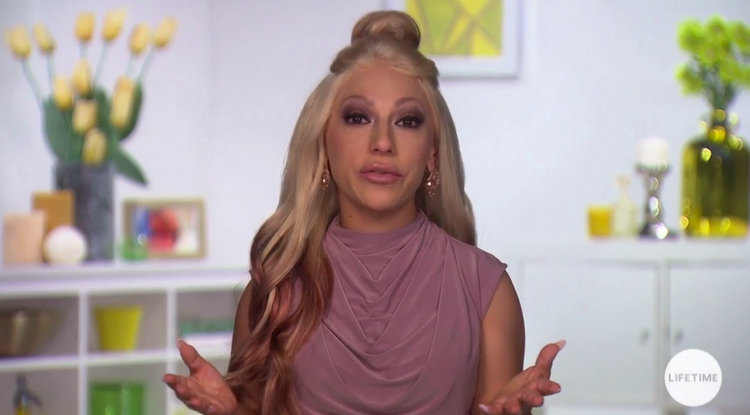 Todd is recovering well from his surgery, so he and Christy actually venture out of the house. Woohoo! Christy threatens to sue Terra if she uses stories about her without a release. Todd agrees, hoping it won’t come to that. Meanwhile, Jasmine and Chris visit Elena and Preston at their new house, where Chris shares his giddy excitement about a conductor job and Jasmine confronts Elena again about the inane “fierce” debate. Bottom line: Elena still doesn’t know why Jasmine is sticking her head in this particular toilet bowl on Briana’s behalf. Let Briana stir the poop all on her own! Jasmine is relentless though. She oddly feels like she has a dog in this fight. 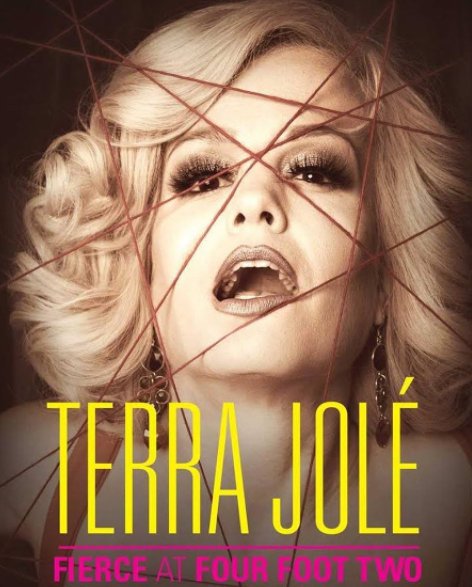 It’s the day of Terra’s book launch, so the ladies come to the bookstore to support her. Or shade her, if you’re Jasmine. Briana doesn’t speak up about the “fierce” debate, having accepted her fate on the surface. But after Jasmine eggs her on to “speak her mind!” Briana suddenly does feel super offended and slighted. So, thanks, Jasmine! Now Briana has to figure out how to confront her.

So, Briana decides to passive-aggressively wear a tank top to the Warrior Dash with a Shakespeare quote from A Midsummer Night’s Dream, “Though she be but little, she is fierce!” Tonya sees this as a big f–k you to her, since “I told Briana she stink.” Oh. My. God. 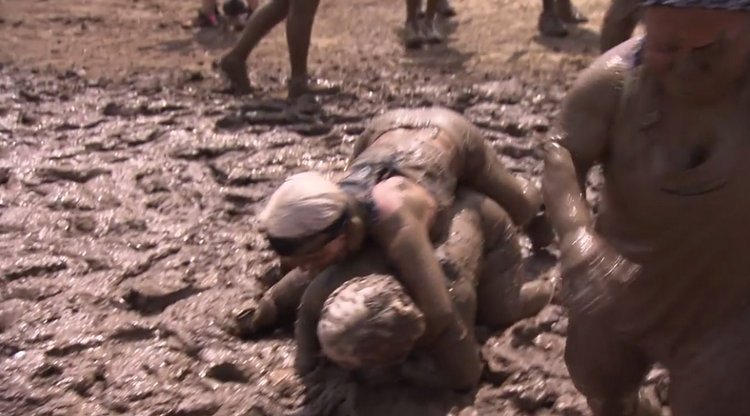 After the dash, in which Jasmine literally tackles Terra to the ground at one point (LOL!), the ladies shower off (except for Briana?!) and get down to the business of screaming at each other. But before that happens, Tonya pulls the tackiest move she’s possibly ever pulled in six seasons of this show: She asks everyone to purchase the clothes they’re wearing so she can make some coin. Elena’s the only one who honestly grumbles about this forced sale, and I sort of love her for calling Tonya out on her absurd behavior. 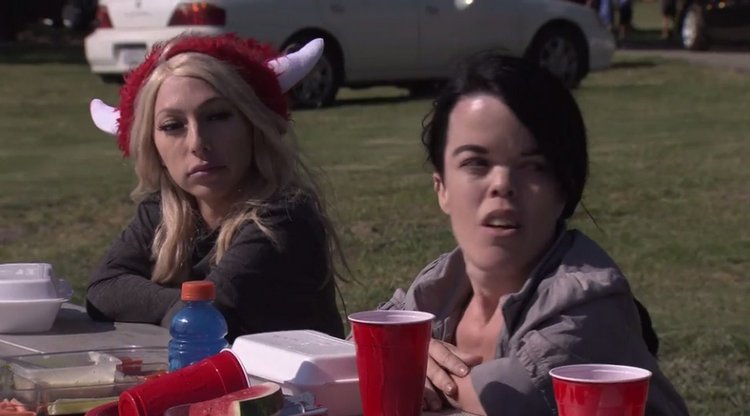 Tonya also calls Briana out on her shirt, which she says doesn’t represent her at all. Then she calls her out on everything else! “The reason I didn’t want you at my show is because you’re unreliable and your hygiene is not up to par,” snarks Tonya. Sitting there like a mute, Briana just takes this sh*t served up straight. She mutters something about having a “chemical imbalance,” not hygiene issues – which Christy suggests she go to a doctor for. Ack!

But when Jasmine jumps in to defend a defenseless Briana, it’s Terra who takes the lead (of course). Now the title of her book is on the table for debate, with Christy piling on that Briana owns the word fierce more than Terra! Terra’s all, “Shut up!” Then in a moment of clarity, Elena correctly calls out Christy for hypocritically defending Briana, even though Briana cut her out of her life. (Remember that whole “She’s dead to me?” business.) 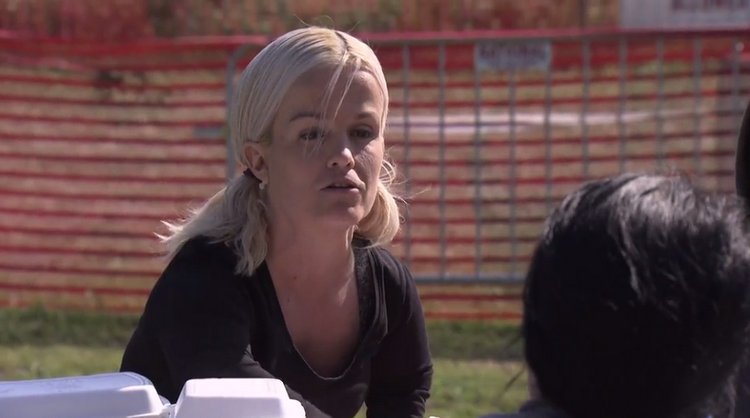 In the end, what it really comes down to is this: Briana has no real friends here, including Jasmine, because her friendship is always conditional. The conditions being, “Do you like Matt? Check one: YES or NO.” If no, that friend is cast out forever. But instead of owning up to the real issues in her life, Briana wants to make it all about the book she’s writing. So Terra finally cuts her off with the grim reality of the situation, “You’re not fierce, boo.” And there you have it.

TELL US: SHOULD BRIANA FIGHT HER OWN BATTLES? WHY IS JASMINE SO UPSET WITH TERRA’S BOOK TITLE?

From bad to worse.  It seems safe to say that Little Women LA star Christy Gibel and estranged husband, Todd Gibel, are officially done.…
4 years ago