Do you have any antibacterial sanitizer left after using it to wipe your screen down last night while watching Little Women: LA? You might want to give it a second cleaning today just to be safe because Matt Ericson [Grundhoffer] slimed that sh*t up something FIERCE. And no, I don’t own that word. Neither does Briana Renee, who needs to take a poll, phone a friend, and use her damn lifeline in order to get a single clue. Because she is not winning at this game.

In Alaska, we pick right up where we left off: with Briana confronting Matt about cheating, and him finally admitting it. Is he thrown off the boat, as he should be? No. He’s allowed to stand there and smirk like the d-bag he is, all the while trying to lay blame at Briana’s feet for tossing him out of the room the night before and threatening divorce. “You’re sick!” screams Briana, which is the understatement of the year.

Refusing to apologize, Briana threatens that their marriage is over. Even though we all know it’s not. But they’re not done airing their dirty laundry yet. Nah – everyone on this boat (and we poor suffering souls, the viewers) have to listen to Matt’s complaints that Briana doesn’t give him enough sex. OK. Recap’s over! I’m out. <playing taps> 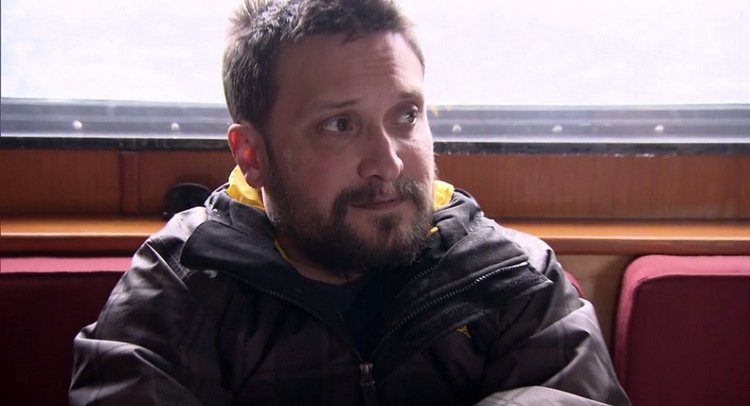 Alright fine – we’ll do this together, people! But ugggghhhhh. This guy. Even Joe Gnoffo looks like he wants to disappear, and he usually lives for these moments. Elena Gant even gets into the mix, screaming that Matt’s a drunk a$$hole – which she’s seen evidence of herself, off camera! Then Matt stupidly defends that he didn’t kiss that random chick for that long! Christy McGinity begs Briana to walk away, telling her that she should just divorce this guy now so she doesn’t have to pay alimony. (WTF!?)

Matt doesn’t give a rip about what anyone says, claiming he doesn’t care about money (HA!). And he certainly doesn’t care about Briana. Terra Jole just wonders how Matt treats Briana behind closed doors if this is how he treats her in public? I for one don’t even want to imagine that mess. But their kids deserve better – and that’s the sickest element of this entire garbage situation. 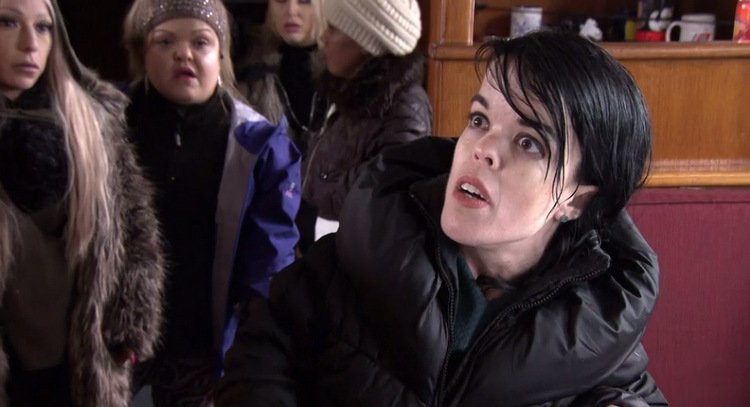 After the sh*tstorm, the ladies gather in the back of the boat to regroup and support Briana. Knowing she won’t ever leave this dirtbag, they still try to persuade her to act differently this time. Terra doesn’t think Briana will ever be able to trust Matt, but Briana’s self esteem is so low, she might not even care. In the front of the boat, Matt spouts off to Joe and Todd about his many reasons for being Matt. Todd looks like he wants to puke in his purple face, which I totally can relate to. Elena just wants to get the hell of this boat, out of Alaska, and back to her babies. Because this place is whack! Even though Tonya Banks stupidly announces “We really accomplished something here!” What. The. Hell?

Back in their hotel room, Briana sits dead-eyed as Matt pretends to pack a bag. Turning things on herself, Briana admits she needs help. Then she begs for an apology again, which Matt argues he wasn’t going to give her in front of everyone! But now he is very, very sorry. So, okay? All good? Good. Suddenly Briana seems more concerned with her friends hearing about his cheating than the cheating itself, which is INSANE. She also blames the girls for their meddling, rather than her husband for being TOTAL scum. Then Matt demands that Briana come home with him because he doesn’t want to take care of the baby by himself! Of course Briana will agree. And with that, Bonnie and Clyde peace out back to the abysmal nightmare they call a marriage.

When Elena gets back home, she’s overjoyed to see her normal husband and sweet babies, confessing to Preston that the trip was friggin’ horrible. She also never got to deliver a piece of her mind to Terra, as planned. So now she’s got to find a moment to do it back in LA. She wants to throw a dinner for everyone soon to do the deed. 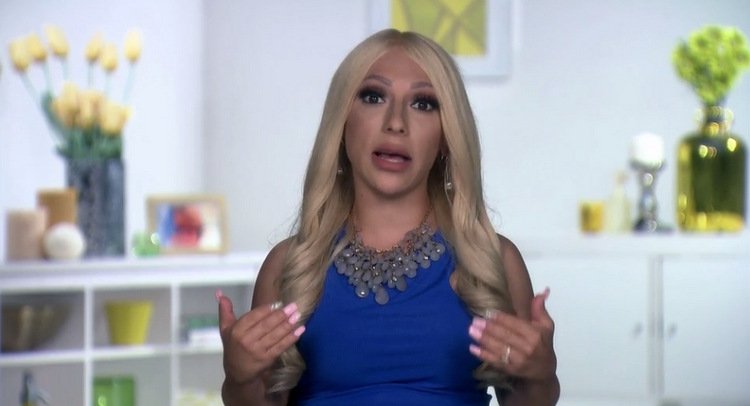 Jasmine Sorge and Chris are glad to be home with their kids too, getting ready for Chris to start his new job soon. Jasmine is also itching to confront Terra. She wants her to realize that dishing it out means you need to take it every once in a while too. Word.

As they shop for engagement rings, Tonya and Kerwin get some sticker shock at the $30K price of Tonya’s coveted 3-carat diamond. “You’re gonna be working!” jokes Tonya. But we all smell the fakery of this scene. Please. Tonya admits she does have cold feet about getting married, and just trying on rings is giving her the sweats. But when Kerwin promises to get her at least 2 carats, she seems fully recovered.

Out for ice cream, Jasmine confronts Terra about her behavior. After they discuss Briana’s delusional social media posts (24 hours after Matt’s cheating) about being “crazy in love!” they get down to business. Jasmine tells Terra that her mountain meltdown was out of control, and it’s not fair how Terra attacks everyone. Terra thinks Jasmine is mad at her on behalf of others – but what’s her personal issue with her? Jasmine defends that she’d just not okay with Terra’s behavior, especially when it comes to the Christy video. Terra agrees that she needs to talk to Christy, not just scream at her. And she admits the video took things to a bad level. But how she’ll backtrack from that mess is no easy feat.

At Matt and Briana’s house of horrors, they’re pretending everything’s fine. Therapy will fix them! And a spinoff show ain’t too shabby either, eh? Because that’s the deal they’ve obviously struck with Lifetime, as they’ll be appearing in Little Women: Couples Retreat this summer. Briana also whines that she doesn’t want to see the girls because they’ll just give her the third degree. Whah! Don’t they know that she and Matt are just CRAZY IN LOVE?! That they are RIDE OR DIE?! To all of this, I say: I have not even one gag left in me.

At dinner, Jasmine and Elena talk about how glad they are to be the hell out of Alaska, while Christy walks in with a whiteboard and marker as her communication tool for the night because she caught laryngitis! It might be a blessing, considering Terra wants “talk” to her tonight. Plus, it doesn’t take that long to write “Eff you!” with a sharpie. Tonya and Terra arrive next – Tonya confessing that Kerwin took her ring shopping. Jasmine just wants to know who’s going to be in the wedding? Because they need something new to fight about.

Terra asks Christy to chat outside. She brings up the police report again, then admits she only put the video on blast because Christy wouldn’t sign the release. Which, DUH. Christy tries to write something in her phone, but Terra’s blathering on too much to read it. So Christy just croaks, “That was my past! You had no right to show that video.” She’s sick of Terra playing victim, and she’s sick of living Groundhog Day every day with this chick.

Not getting what she wants, Terra snarks that she’s not sorry anyway – she just wants to “let it go.” Whatever that means. Exasperated, Christy just throws up her hands. There’s no winning with Terra – voice or no voice. So why even try? Literally fighting with only herself and her delusions of grandeur by the end, Terra finally screams at no one, “You’re such an IDIOT! GAH!!!!” Girlfriend needs to calm down. Go home. Go to bed. And wake up to reality.

All fired up, Terra moves back inside and on to the next fight! She recounts why Christy left (her very skewed version), then starts in with Elena, who calls Terra out for being a hypocritical instigator. She made Alaska a sh*tshow, she screams at whomever she wants whenever she wants, and takes no accountability for any of it. Elena asks why she can’t just be cordial with Christy? Instead of answering, Terra screams that Elena doesn’t like Christy either! But Elena does, and she thinks it’s ridiculous that everyone has to hate who Terra hates. Disgusted, Elena decides to leave too. She’s done trying to argue with a fool.

But Terra’s not done, following Elena out on to the street to stupidly accuse her, like a child, about liking Christy more than her. Elena can’t believe the level of maturity she has to deal with here – which is below kindergarten at this point. Insane with rage (as always) Terra turns it on Elena again, claiming that ever since her baby baptism they’ve had issues. Because Terra would be a fantastic godparent, right? <eye roll>

Elena’s so over Terra’s self pity, she can’t even stomach her crying. “I can’t stand your f**king fake tears anymore!” she shouts, leaving Terra to blubber on the street with her one remaining friend, Tonya. The only friend she’ll possibly have left once this season is over. Because no one seems up for her schtick anymore – and her manic behavior seems to belie the fact that she’s seeing the writing on the wall.

TELL US: IS TERRA GOING TO END UP ALONE? WILL BRIANA TURN ON THE GROUP OVER MATT’S CHEATING, AS USUAL? WHAT HAVE WE DONE TO BE SUBJECTED TO MATT IN OUR LIVES?