Below Deck Mediterranean Recap: If You Can’t Beat ‘Em, Onion 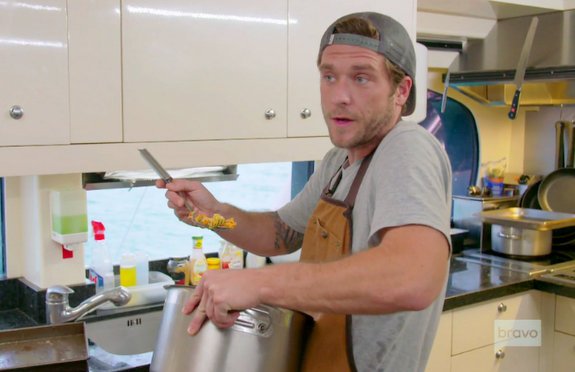 There must be something in the water on Below Deck Mediterranean. If you thought the eye roll-worthy love triangle between Deckhand Malia White, Bosun Wesley Wiz Walton, and Chef Adam GropesALot Glick was over, you would be wrong. It’s just getting started and as a slimy bonus, let’s throw in Bobby Giancola for good measure. Feeling sea sick yet? Don’t worry, you will soon and it has nothing to do with the onion soup.

Speaking of, let’s check in on the Man Who Cannot Not Onion when it comes to chef-ing: Adam. He is busy throwing an onion sized hissy fit that Chief Steward Hannah Ferrier didn’t use her ESP to know that the guest ferry to the waterfalls were delayed and therefore, caused the picnic food Adam so angrily prepared to sit out and possibly spoil. You guys know what hate sex is right? I feel like Adam could make hate cooking a thing. 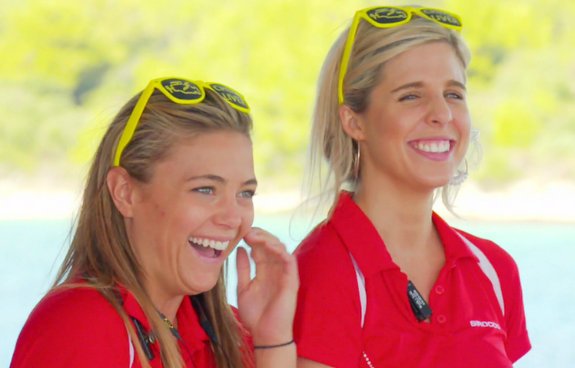 So Adam is blaming Hannah for the fact that his precious food has been left sitting out for an extra 20 minutes and tells her that Second Steward Christine “Bugsy” Drake should be the Chief Stew instead of her. Mind you, Bugsy is standing right there and while she admits she is uncomfortable, I think she could have at least backed up Hannah against Adam’s ridiculous tirade. Come on, Bugsy, ladies before crazies! Hoes before psychos! To Hannah’s credit, she holds her own just fine because no one talks to her like that EV-AH.

Finally at the waterfall, Adam, like the true sociopath that he is, switches gears from ripping into Hannah to trying to flirt with Malia, back to ripping the primary charter guest, Kenny, for having the audacity to not appreciate his onion fest of a menu. He even says Kenny is a “redneck” and is dragging him through the mud all because of one silly little ingredient request. Careful of whom you call a redneck, Adam, last time I checked, you lived in a van down by the river. 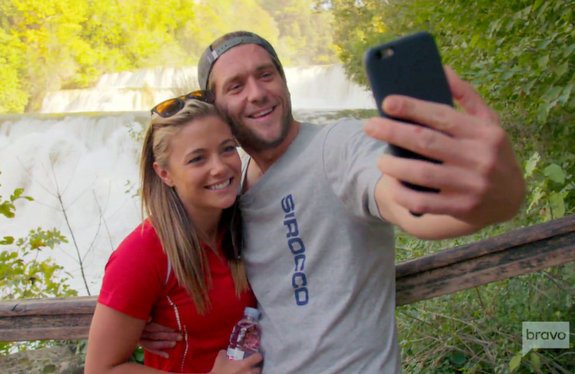 All of this onion drama is still unbeknownst to Malia and if she did know, I’m not sure it would matter but either way, while the guests eat, Adam asks Malia to show him the waterfalls and they take off, leaving the rest of the crew to stand there and gossip about it. Once at the waterfall, Adam goes approximately 60 seconds without being a total a-hole so naturally, Malia is smitten and they share another kiss. But poor little hot girl is feeling conflicted that Wiz didn’t get the same chance. I mean, ok, but you don’t have to give them equal face sucking opportunity here. Never one to be left out, no matter how little of a chance there is, Bobby is busy yammering on about his crush on Malia being hampered by his lack of time with her. Right, because if she got more Bobby Time, I’m sure his slobbering and unsolicited CPR attempts would win her right over!

Onto dinner and the guests are thrilled with the beautiful set up the interior crew has done but little do they know that there is an onion lurking in the midst. Adam has decided that he’s not going to let some (filthy rich) redneck spoil his cooking with some tiny, minuscule request, so he makes onion soup as the first course. Seriously, what did Kenny ever do to Adam? This quest to force a paying guest to eat something he doesn’t like is beyond weird and downright embarrassing to watch. I wonder if Adam is watching these episodes now and realizing just how ridiculous and immature he looks. That is, if river van homes have cable access.

Kenny immediately notices the onions in the soup and once again, he lets it go and tries to enjoy dinner with his friends. Nothing gets sent back, but Kenny has taken note and is not happy.

Malia has a rare break from getting dry humped when she talks to Max Hagley on the back deck. But she still can’t escape the questions – Max wants to know if Adam is her cup of onion soup tea (he is), what she thinks of Wiz (they are pals) and finally, if Bobby hadn’t hooked up with Drama Queen Lauren Cohen, would things be different (maybe, possibly). Then Wiz asks Malia to go for a walk and Max uses this opportunity to immediately run and tell Bobby he still has a chance (GROAAAAN). Max, do not feed the gorillas! Seriously, what is he thinking? Now Bobby excitedly thinks he has a shot at Malia. 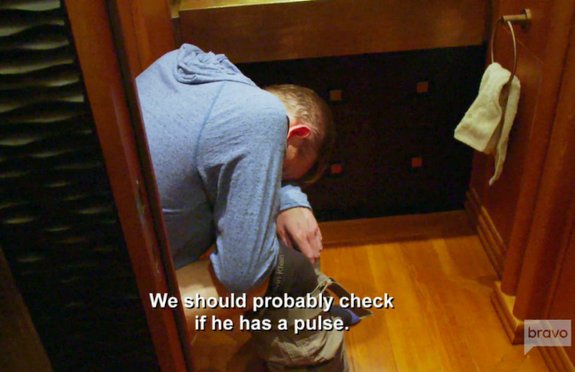 Just when I thought I couldn’t take anymore, the show gives me a reprieve with a moment of pure comedy gold when Hannah and Malia go to clean up some of the guest rooms and discover one of them passed out on the toilet. I guess if you’re drunk and going to pass out, that would be the best place to do it.

The next day, the Sirocco heads out to sea and Bobby seizes his moment to talk to Malia about his sliver of a possible chance with her. Malia plays coy and doesn’t really do anything to help dissuade his delusions by saying that he is athletic (eww) and handsome (ewww times two) BUT there is that whole Lauren thing. Only hearing the athletic and handsome part, Bobby asks if she would want to hang out and she says only as friends. Instead of understanding that it’s not going to happen, Bobby is literally as close as you can get to the real life Lloyd Christmas in Dumb and Dumber saying “so you’re telling me there’s a chance”.

Breakfast is served for the guests and there is more disappointment in the kitchen – they get another fruit and cheese plate, which let’s face it, you can get anywhere. They request eggs again and Adam stops making Malia breakfast for two minutes to do his damn job.

Luckily, the crew planned a pretty fun day for their guests and has set up an obstacle course, where they will compete against each other as a team. One guest dresses up in a wolf speedo and Bugsy has the unfortunate challenge of wrestling him off a floaty. When the crew has to get on a paddle board for one of the obstacles, they find out that the guests have sabotaged them by oiling it up and they slip helplessly into the water. The whole thing ends in a tie and everyone had a good time. It really did look fun and I’m sure Kenny was happy to play something other than dodge the onion in his food, which he mentions to Captain Sandy in passing and again to Bugsy during lunch. 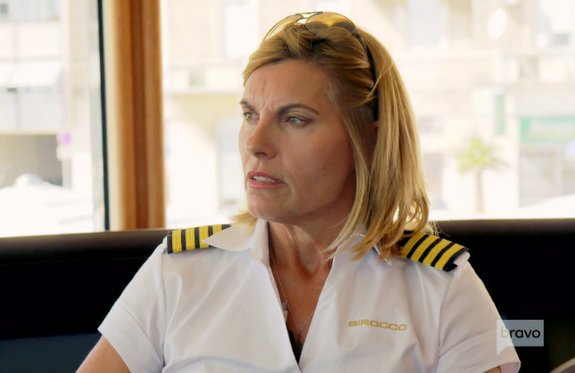 Captain Sandy immediately goes to confront Adam and he lies to her face, saying he did use onions the first night but hasn’t since. Wow, Chef GropesALot could also be called Chef WimpsOutALot, right? All that tough talk about the redneck guests and calling Hannah a slut but when Captain Sandy asks him a question, he practically shoves his hands in his pockets and cries.

Kenny then tells Hannah about the onion soup and she confronts Adam immediately as well. He drops the scared little boy routine and gets all defiant, saying he did it and shrugging like he couldn’t care less. Adam is misdirecting his anger at Hannah, saying she must be enjoying throwing him under the bus, which is incredibly immature considering he is the one creating this giant issue. As they argue, he tells Hannah she has a resting bitch face without realizing Captain Sandy is standing right there. She gives him a “whoa” but does little to back Hannah up, which was pretty disappointing to watch. The fact that Sandy is letting some dirt bag chef talk to her Chief Stew like that in front of her is not cool and I expected more from her.

Hannah has had enough and approaches Sandy later and to tell her that Adam admitted to putting the onions in the food. Oh and also, he’s been disrespecting her in front of the crew. While that’s going on, one of Adam’s many other personalities has come back out and he is busy making a chocolate love pudding to impress Malia. 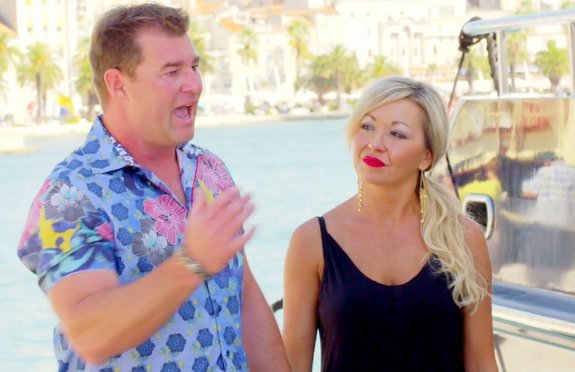 The guests are ready to depart and as the crew is lined up and waiting for their verbal review, Kenny heaps praise for everyone…except for Adam. He gives respectful feedback, but notes the continued use of onions, along with lack of a decent breakfast spread was not top notch. That was a pretty nice way of saying the food sucked. In the tip meeting, when faced with the reality of screwing up the tip for everyone, Adam admits he “may have” added some onions to the soup out of spite. Sandy is pissed but then hands him over his portion of the tip. WTF Captain Sandy? Her balls must have gone right in the soup with those onions. She pulls him aside after and tells him he needs to show his best on the next charter. She wants to fire him but her hands are tied since it’s mid charter season and impossible to find another chef at this point.

The crew heads out to party and at dinner, Adam starts to feel remorse (or is this just a show to look better for his paramour Malia?) and tells everyone he could have cost them their tip so they can have his. Unbelievably, the crew refuses to take his tip, even though they have been grumbling about his jerkiness for days now. They are clearly more forgiving people than me; I would have taken his tip for sure. As the drinking continues, Hannah’s anger over what Adam said about Bugsy being Chief Stew simmers and she’s giving Bugs the cold shoulder.

Adam decides he’s not getting enough attention from Malia and slinks back to the boat, dejected. Ugh, what a baby this guy is! Of course, Malia falls right into his little trap and leaves the crew, citing that when a crew member is having a bad day, someone should be there for them. Maybe so but not when they brought it on themselves. She chases Adam back to the boat and leaves Wiz wondering why she is choosing a bad boy over the good guy.

I think we are all wondering the same thing.

TELL US – WERE YOU DISAPPOINTED IN HOW CAPTAIN SANDY HANDLED ADAM? WHO IS THE BEST LOVE INTEREST FOR MALIA?

Do you ever feel like Bravo tends to saturate the network with a particular show? There are about 846 Real Housewives…
Reality News 2 months ago

Below Deck Mediterranean Recap: The Ballad Of Pancake Nipple Frank

It’s a new day on Below Deck Mediterranean. And Natalya Scudder is finally ready to talk through her truly out-of-nowhere…
Recaps 5 months ago