90 Day Fiance Happily Ever After Recap: The Couples Tell All, Part Two

It was only a matter of time before The Family Chantel busted in again to offer their two cents (which, incidentally, they do NOT want harvested by foreign in-laws). And last night they did just that last night on the 90 Day Fiance Happily Ever After Tell All, which caused Pedro to walk off stage, leaving Chantel to debate the challenges of marriage with the two people who continuously butt their noses into hers. Jorge and Anfisa faced off with Paola and Russ, of the matching bedazzled shoes. Annie threatened to leave David again if he can’t manage to scrape two Bahts together, while Molly droned on some more about what a loser Luis is. In the end, she’s kind of the only winner here because she dumped her extra baggage.

But not so fast! We also got an entire hour after the Tell All that took us on the death march toward Nicole and Azan’s wedding/possible double-murder by Robbalee. Although I won’t be recapping that last hour here, feel free to comment on all of the insanity below! Ah, 90 Day Fiance Happily Ever After, thanks for the memories. We laughed, we cried, we cringed so hard our couches almost swallowed us up. Now, let’s bring on some new couples! (Don’t forget to tune in next week for Before The 90 Days, which will be bringing us a new batch of crazies fresh outta the catfish pond.)

Shaun Robinson is back with our five and a half couples, ready to watching people threaten each other and argue in several languages. After they blew up at each other last week, we pick up with Paola and Anfisa screaming at each other, followed by Jorge attempting to “step to” Russ. Except he actually steps to Paola while Russ just keeps his ass seated, which is pretty hilarious as you witness woman-versus-Jorge just standing chest to chest before Pao stomps off stage. “I want to punch that b*tch in the face!” threatens Paola as she marches to a room somewhere to whine.

Well, okay, Anfisa. Then let’s talk about Jorge and the twelve years of prison he might be facing! But wait, he won’t talk about that either. Poor man’s Dr. Phil (David) pipes up that he suspects Anfisa probably tipped the cops off about that drug smuggling. Because that chick is skilled in the art of ruining Jorge’s life one cracked iPhone at a time. Jorge and Anfisa just give David’s purple shirt the death stare in response. 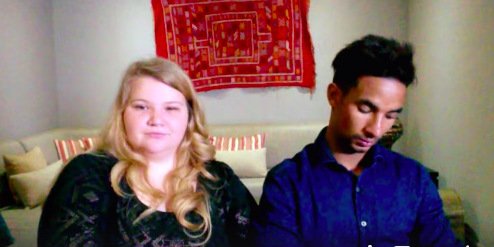 Robbalee joins the group on stage to talk about the likelihood that her daughter will actually  marry Azan. Magic Robbalee ball says: OUTLOOK POOR. She’s still obviously disgusted by Azan, but claims that she “supports” Nicole and all of her hideous decisions. “I have my eye on him,” she says about Azan, who is sweating through Skype. “Oh, he’s a player!” chirps David, who is thrilled to have all of these dysfunctional people surrounding him, thereby sucking up some of the loseriness that usually just wafts off of him.

(Also, If I were Shaun Robinson, I’d be shoving an ether-laced rag in David’s big mouth right about now. But that makes me sound like a creepy serial killer with a plan, so….never mind. You never heard that!)

Chantel and Pedro are on the hot seat next as everyone else sits backstage talking about them. Shaun wants to know the state of Pedro versus The Family Chantel. It’s a non-relationship, and Pedro would like to keep it that way. In fact, when Chantel’s parents pop up on the big screen (sans tiny cowboy hats), Pedro just rolls his eyes and walks off stage. He no want to see that family in life OR on spooky screens! I mean, once you survive that cabin in the woods scenario followed by a weave-pulling group brawl, aren’t you good for a while?

Also, Pedro and I agree on one thing. Our joint statement is below: 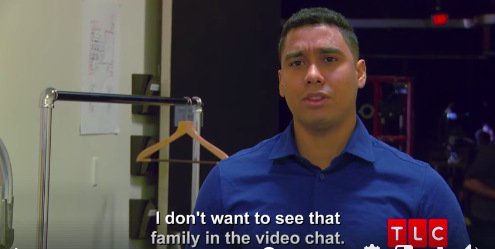 Chantel bemoans the fact that Pedro won’t talk to her family, but she still doesn’t admit her own part in stirring the sh*t. She does successfully coax Pedro to rejoin her on the couch, where they relive The Family Chantel’s suspicions of his intentions. As much as Mother Chantel says, “I am not LOC-A!” we all think she is kinda-sorta-VERYMUCH-loca. Chantel even concedes that Pedro’s family didn’t set her up in some “marriage ring” situation, despite their obnoxious and greedy ways.

When it comes to laying blame at someone’s feet for the fistfight that went down, Pedro and Chantel still blame one another – and their families. Again, NO ONE brings up the fact that River used the “n” word, nor does the video playback clear anything up for either side. The only thing we can all agree on: Nicole got whooped.

“It’s your whole family versus me!” defends Pedro. Mother Chantel decides to very slowly quote Sir Isaac Newton, reminding Pedro that actions have reactions. For instance, when you accuse someone of swindling your daughter, maybe he’s gonna hate you! At least Mother Chantel apologizes for pulling Nicole’s weave out. Meanwhile, Pedro’s mom thinks he should divorce Chantel and go home to the DR. In the end, this marriage is between Chantel and Pedro though, and they still love each other. Guys, it’s time to say BUH-bye to both of these sh*t-tastic families for a while. Change your address, buy some chicken feet. Prepare to hunker down.

Moving on to Russ and Paola, the couple discusses their sad losses – both the miscarriage and Paola’s grandmother passing away. As we know now, they’re expecting their first child, so YAY! But at the time of filming, Pao still thinks Russ hasn’t processed the loss with her enough. “I was wrong,” says Russ, who just wants peace, but thinks the universe has a bigger plan. This isn’t what Paola wants to hear, and she lets him know it backstage on the break. Sigh. At least they’re in a better place now. And have hopefully improved their acting skills.

Back from break, David calls Luis on the phone. But before we can hear a “BABY?” come out of his mouth, the line is cut. Luis ain’t no fool. But according to Molly, he is a “p*ssy.” Oof.

We end with David and Annie revisiting their depressing nightmare of a life. Annie doesn’t care about a green card anymore, she just wants an apartment with windows that open. Since David can’t provide himself with trousers that fit, let alone a roof over their heads, he knows he’s in trouble. For now, they’ll just have to make due with a hot plate and a dream.

Post-reunion, we see Paola and Russ pile into their car, still arguing the entire way. Paola is incensed about (what she perceives as) Russ “not caring” about trying for another baby yet. “Stop with the f**king smile on your face!” screams Paola, who threatens to leave Russ if he can’t bend to her will. Sure, Jan. Sure.

Back at their hotel, Pedro and Chantel discuss the state of their marriage as well. And guys, it’s NO BUENO. As we know from social media, they’re still together – but for how long?

Alright, time to sit back and relax as Nicole and Azan plan their Moroccan wedding, then take us on an Inception-level journey into a scam within a scam within a scam. Don’t forget to meet back here next week to harvest the rest of your brain cells because it’s time for the EPIC season two of Before The 90 Days, featuring Paul, Darcey, and FOUR BRAND NEW COUPLES. Wheeeeeeeeeeee!

As for Happily Ever After, it’s the end of the world as we know it. And I feel fine.

TELL US: WILL ALL OF THESE COUPLES STAY TOGETHER? CAN PEDRO AND THE FAMILY CHANTEL EVER MAKE PEACE? IS DAVID PRACTICING TO BE SOME SORT OF SAD-SACKY LIFE COACH? THOUGHTS ON NICOLE AND AZAN’S AFTER-SHOW?

Whew, chile. The Bravo streets are talking about Robyn Dixon and Juan Dixon, and NOT in a good way. After…
Reality News 21 hours ago