On this week’s episode of Married at First Sight, we get to see the final two couples walk down the aisle. We found out last week that Luke Cuccurullo knows a friend of his new stranger wife, Kate Sisk. He also recognizes his wife to be and points it out to his friends. As she walks down the aisle, there is fear in his eyes. Could it be because he doesn’t like what he sees? Or does he know the friend more intimately than he should? Either way, I am hoping for the best for Kate. After her parents’ divorce, she has thrown caution to the wind for her own chance at love.

Interestingly enough, Luke immediately recognizes Kate as someone he has met before. Despite them meeting only three weeks ago, Kate doesn’t recognize him. I guess he wasn’t all that memorable. I can’t remember what I ate earlier today, but I can definitely remember faces. Nonetheless, they both seem to be attracted to one another as they read their contracts vows. Their words are beautiful, but I am really wondering how they can write them so easily for someone they don’t know. After the ceremony, they share a glass of champagne in a quiet area. It is more than obvious Luke is nervous and seems awkward. He reveals he has met Kate’s friend Megan, who is a guest at the wedding. Immediately, flags are raised in Kate’s mind. Then, she connects the dots. She met her now husband at a speed dating event with her friend, just a short time ago. 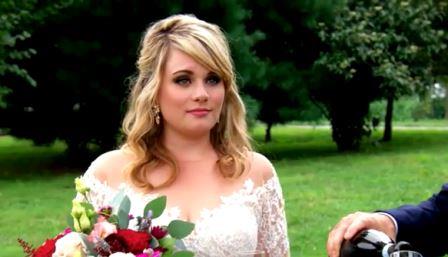 Kristine Killingsworth and Keith Dewar are the fourth and last couple to walk down the aisle. Kristine’s nerves are setting in as she waits to meet her husband. Kristine’s brother is in the audience sizing up his new brother-in-law. Her mom seems overjoyed and impressed meeting her daughter’s groom. Meanwhile, Kristine’s dad is in the process of letting her know she can always be a runaway bride. She decides to move forward with the wedding, only to have to stop as the doors open.  Her garter keeps falling down her leg.  Needless to say, she is embarrassed about her big moment being ruined.

Kristine and Keith are both are attracted to one another as they look deeply in each other’s eyes. Wait until she realizes he doesn’t live alone and his family thinks he is spoiled. Insert side eye here. For a woman who has been dubbed as extremely picky, she seems thrilled with her new hubby. Once they get time together alone, Kristine learns Keith can’t cook and likes to couch surf. On the contrary, she likes to be active and workout.  I guess we will see how that plays out (sips tea slowly).

Now that all of the weddings are over, it’s time for wedding photos complete with a kiss. Talk about awkwardddddddddddd. Luke and Kate can’t look any more uncomfortable if they tried. In contrast. Kristine and Keith seem like they have dated for years. Their poses look very intimate and passionate. Does anyone want to place a bet on who will be consummating their marriage on the first night? My bet is on them!  Let’s just hope they have as much chemistry mentally as they do physically. 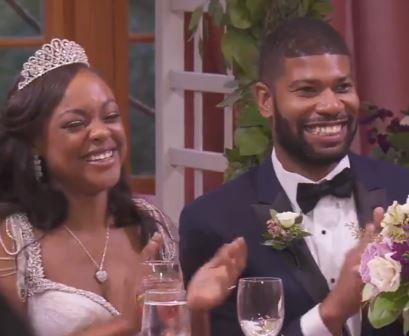 The couples attend their receptions and get a chance to meet one another’s families. It has to be super awkward to meet, marry, and have everyone you love silently stare and judge your interactions with an unfamiliar person. As of now, all of the couples seem happy with their spouse. As any true Married at First Sight fan knows, true personalities don’t appear until their honeymoons and when they move in together. That is when everyone starts getting real and all of the niceties are out the window.

During the reception, Luke and Kate feel forced to kiss by all of the clinking of glasses by their friends and families. Kate is willing, but he seems extremely hesitant for any PDA with his new bride. You can see the beads of sweat gathering on his forehead as each glass is hit. I understand wanting your first kiss to be natural, but don’t make your bride uncomfortable.

Just give her a kiss on the cheek, if you think it’s too early for any other type of kiss. I really hope Luke isn’t going to be Jephte 2.0. It may be too early to tell, but I am getting a vibe that screams stranger danger towards his wife. Luke declines the kiss that his wife is willingly offering to him. 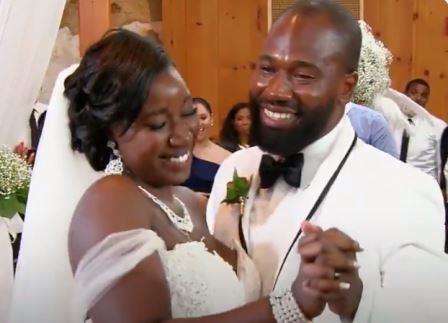 Each couple has a family member deliver a funny or emotional speech. Then, Queen Kristine’s brother and father approach her new husband Keith at the reception. They give him some advice and their expectations of him as a husband. Keith is able to put their minds at ease with his respectful and open personality.

Luke’s friends warn Kate that he is not the best communicator. But she appreciates the help from people close to him.

Jasmine McGriff feels like she has been a part of Will Guess‘ family for quite some time. They welcome her with open arms.

AJ Vollmoeller meets Stephanie Sersen’s mother and father and he is nervous, to say the least. Her parents have a good feeling about their new son in law, so far. 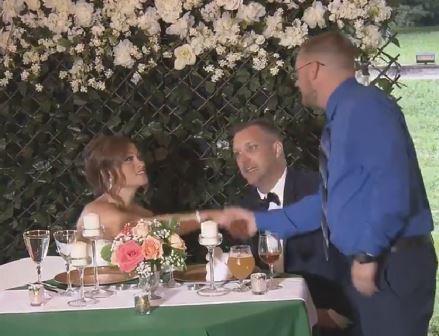 Luke reveals to Kate’s friends that he is a person that takes things slowly. The girls seem very curious about the sleeping arrangements for the night. After Luke’s display over a kiss, they should have realized he isn’t jumping into anything feet first. At least, he isn’t going to be the type to pressure his wife to be intimate.

All in all, I have to say this season’s couples look nice together. Everyone seems happy and attracted to one another. In the past Married at First Sight seasons, there has always been one couple that seemed oddly matched. I am not fooled; I know there is a catch, but I am just waiting to see which couple it is. Married at First Couple couple it is. There has never been a season that there weren’t some serious issues. From the previews for the season, the show may have started sweet and slow, but there will be some drama!