Below Deck Recap: Blame It On The Bourbon

Welcome to charter number two, my yachties! It’s the morning after the first crew night out and everyone on Below Deck is feeling a tad bit hungover. And she may be worse for the wear, but one thing Rayna Lindsey isn’t feeling is embarrassed over her makeout with Jake Foulger. Even with the boat abuzz with gossip, the only thing she feels the need to explain is her situation with Issa. That’s the guy she was texting at the end of the last week’s episode. Which, to be clear, was after she spent all night flirting and making out with Jake. But according to the deckhand, Issa’s just a guy she met at a club in Mexico. Who lives in Canada. Whom she’s just talking to. So they’re not exclusive. Not monogamous. It’s all good.

Meanwhile, Captain Lee Rosbach calls Eddie Lucas, Rachel Hargrove and Heather Chase together for the second preference sheet meeting. The incoming charter guests are a group of real estate brokers from Seattle. And the big takeaway is that they love bourbon. Like, in an obsessed way. In fact, on their first night, they’re requesting a multi-course dinner with whiskey pairings for each course. Other than the bourbon, their requests seem fairly straightforward: a Hawaiian luau (kind of off-brand in St. Kitts, but OK…), and lots of golfing off the back of the yacht. Should be a piece of cake, right? 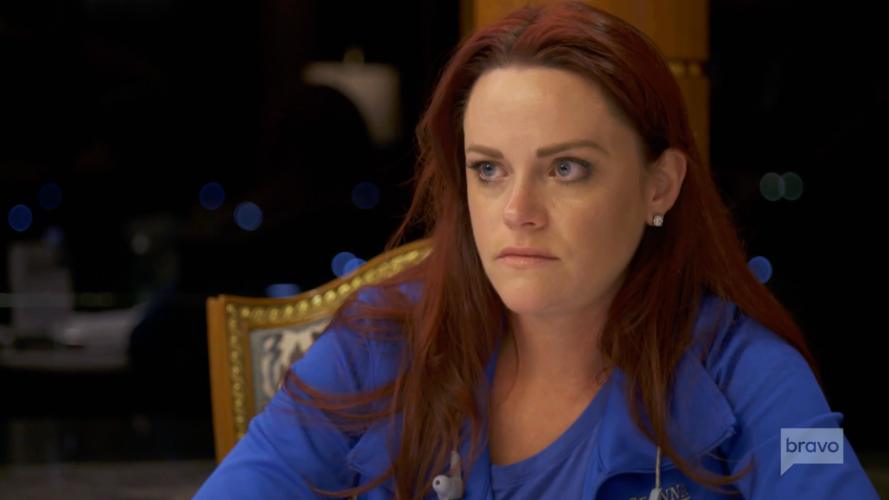 With pick-up not happening until the following day, the crew has a full 24 hours ahead of them to turn around the boat. Other than Fraser Olender getting the tea on Jake from Rayna, the day passes fairly uneventfully. But after the work is finished, Rachel pulls Eddie into the main salon for a confrontation that’s been building since the end of last season. Rachel’s feelings have been hurt ever since she saw all the things Eddie said about her behavior during Season 8. She calls his observations “alarming” and “vicious” attacks” on her character. But considering how embarrassing and crass the chef gets when she’s drunk, she might want to do some serious self-reflecting before pointing the finger at Eddie.

After all, everyone knows Captain Lee‘s two biggest rules: don’t embarrass yourself and don’t embarrass the boat. And Rachel basically did both every time she stepped off board. However, Eddie‘s not interested in fighting with Rachel this year. So while he’ll be the first to admit he wasn’t a fan of the Rachel of last season, it’s time for a clean slate. He apologizes for not saying anything to her directly last year and promises to do better. The two manage to hug it out, and the conversation isn’t really that much of a confrontation after all. 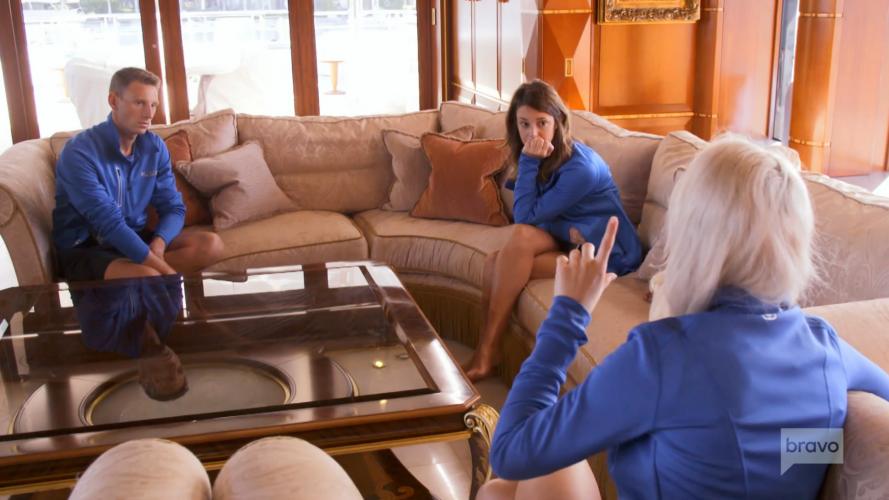 The next morning, it’s time for the start of the charter. After Captain Lee gives the requisite beginning of season speech he would’ve given two episodes ago, Heather calls Fraser and Jessica Albert together for an interior meeting. Or “liaison” as she calls it. The chief stew doesn’t want her department making the same rookie mistakes they made during the first charter. But she doesn’t really present any solutions for fixing the issues. Instead, she tells the stews she’s just going to push them to work faster. Heather wants quick martinis, people! While Fraser admits he’s definitely not impressed with his new boss, Jessica’s nicknamed her “Micromanager Marion” after her busybody grandma back in Florida. Let’s just say the vibe in the interior is great so far…

With that, the guests arrive, and it becomes clear rather quickly that they might already be drunk. So that’s going to be fun for the crew. One guest named Justin, in particular, tells Heather during the tour of the yacht that he’ll “do whatever the f–k [he] wants. Oh , and also threatens to kick the sole female of the group “down the goddamn stairs.” As…a joke? Consider these statements red flags number one and two. Red flag number three is that he almost immediately asks for his whiskey in a thermos. Yikes. 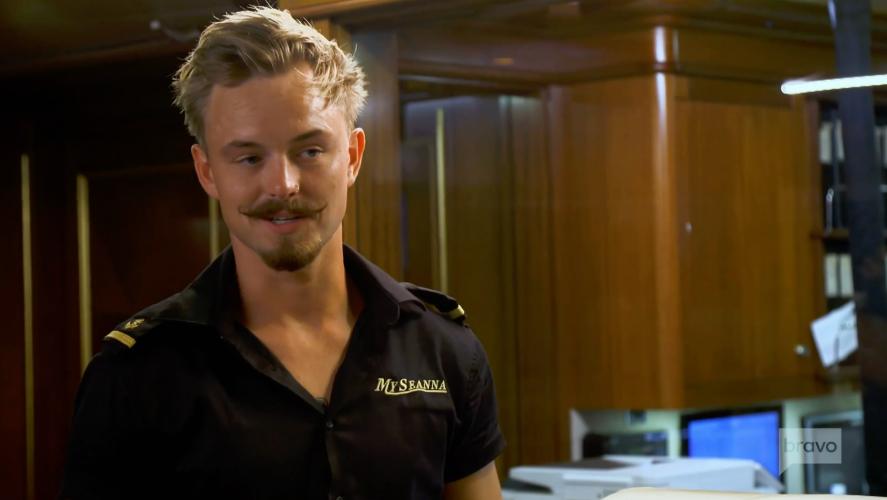 As night falls, Eddie heads to the bridge for a talk with Captain Lee. As first officer, he wants to get out of his former bosun duties as quickly as possible and appoint a lead deckhand. He’s been campaigning for Jake to get the role for a few days now, though Lee’s been reticent to appoint a lead so quickly. However, Eddie manages to talk Cap into the idea — with the caveat that if Jake folds under the pressure, it’s on Eddie. Calling the mustachioed deckhand in, Captain Lee offers him the job, and he’s more than happy to accept. And would you believe it? Fellow deckhands Rayna and Wes O’Dell seem genuinely happy for their new pal’s promotion, too. I’ve gotta say, the vibe of this crew is actually pretty great so far.

For dinner, Rachel‘s prepared a night of elevated Thai food to pair with the guests’ thirst for bourbon. And Captain Lee‘s joining them for their white party, albeit with apple juice in place of his whiskey shooters. But even before he arrives, the mood at the table is a little…aggressive. The guests have been drinking all day, and more than a couple of them are already a little riled up. Let’s just say the constant flow of alcohol hasn’t helped keep things very civilized. Even before the first course is served, the guests are swearing and putting each other down. And Captain Lee’s left to suffer through it with an unamused grin on his face. 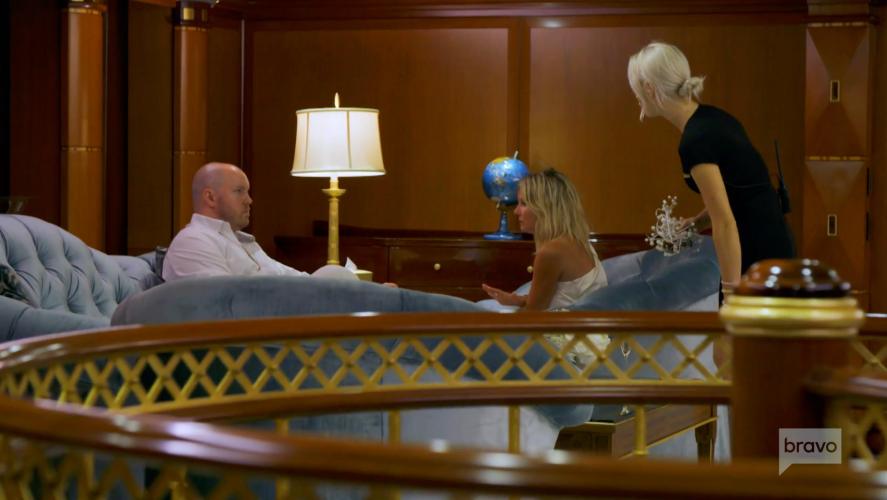 The night is pretty much all downhill from there. After the first course, a very drunk Justin gets offended about how fancy the dinner is and storms away from the table under a cloud of curse words. And then opts to take the rest of his dinner alone on the swim platform, staring menacingly into the water while Wes and Eddie take turns babysitting. Back at the table, the conversation is, well, a good reminder of why it’s never fun being the only sober person in the room. As the guests get more and more sloshed, Lee is forced to endure a never-ending circle of the same questions. I mean, we practically lose track of the number of times the woman in the group, Terri, tells him she, too, is from Michigan. It’s truly cringeworthy.

While Fraser and Jessica are busy bonding during turndowns over their mutual dislike of Heather‘s leadership (and tone), Captain Lee‘s being subjected to insults about where he lives and veiled cracks about his marriage. Before dessert is served, he’s more than happy to make his exit. It was easily the most painful dinner the poor Stud of the Sea has ever had to sit through with guests. However, the real drama starts between Justin and Terri once the plates are cleared. It’s drunk, nonsensical and, again, so aggressive. But the crew is thrilled to watch the conflict play out, eavesdropping on the pair’s fight from virtually every staircase on the yacht.

At first, Terri’s point is valid — she’s angry at Justin for throwing a tantrum and dipping out of the dinner in front of Captain Lee. But things take a bourbon-soaked left turn when Justin digs his heels in and Terri’s drunk tears start flowing. Fraser‘s pretty hilarious confessional read speaks for the whole evening: “They’re just really not chic. They probably won this trip from some form of lottery or something, I don’t know…Don’t belong on yachts.” But when Justin’s temper flares, the crew starts getting nervous that this drunken situation could escalate into something they can’t control. He starts snapping at Heather, ordering that Terri “needs to go away now.” Then he tells Heather to “go f–k [herself] and throw [herself] off the boat.” Whoa, dude. Not OK. But we’ll have to wait until next week to see how this chaotic night ends…

TELL US – ARE FRASER AND JESSICA’S CRITICISMS OF HEATHER VALID? DO YOU THINK JAKE WILL MAKE A GOOD LEAD DECKHAND? WHAT SHOULD CAPTAIN LEE HAVE DONE DURING THAT DINNER? HOW WILL HE REACT TO THE CHARTER GUEST THREATENING HEATHER?

Joe Gorga and Melissa Gorga have marketed themselves as a wholesome Italian-American family. That’s been their schtick on Real Housewives…
Reality News 16 hours ago

Those working in the yachting industry are a tight-knit group, both on land and the open sea. Even more binding…
Reality News 1 day ago

If you haven’t seen the new Peacock original series, The Traitors, do yourself a favor and RUN to your TV…
Reality News 2 days ago