It’s not her! Ok yachties, we can all breathe easy. Exhale, folks. Malia White is not coming back to Below Deck Mediterranean. On the other hand, the returning crew member joining the deck team was not who I was expecting either. Not even a little bit. I even went back through the lists of former casts by season. And was convinced it was either Malia, Jamie Jason or I don’t know, maybe Delaney Evans stepping back on board. (Gosh, can you imagine Delaney of all people getting another shot at reality stardom?) But nope, it was none of the above.

We also blessedly get a bit of a break this week in the drama between Natasha Webb and Chef Dave White. At least in terms of direct conflict. The episode starts with Dave switching cabins with Kyle Viljoen. So now the co-second stew gets to be buddy-buddy with his boss and have gossipy sleepovers every night. But of course, it’s not all smooth sailing. The chief stew manages to find a way to move the story forward, even though Dave’s officially out from under her spell. 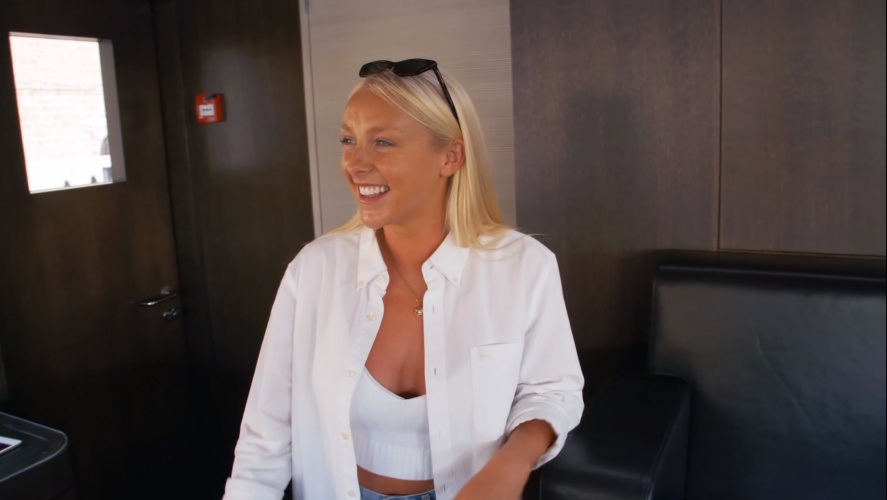 The new deckhand is…Courtney Veale?! Was anyone else expecting that? Even when it showed her long blonde hair as she strode down the dock, it wasn’t clicking for me. And I’m the one who recapped all of last season every week. As it turns out, Season 6 apparently made Courtney realize she sort of hated being a stew. So she pivoted and got training in between seasons as a deckhand. Well, so much for that hard-earned pair of extra stripes she was awarded last year. My only wish now is that we can get Katie Flood back as chief stew before the end of the season.

Besides Captain Sandy Yawn, the person most thrilled to see Courtney is obviously Mzi Dempers. After filming wrapped she even went all the way to South Africa to visit him. But he insists any romantic feelings he spent last year harboring for her are long gone. Well, kind of. Maybe. They might still be there a little. But the less romantic tension the better. Especially considering the two will be working in the same department this year. 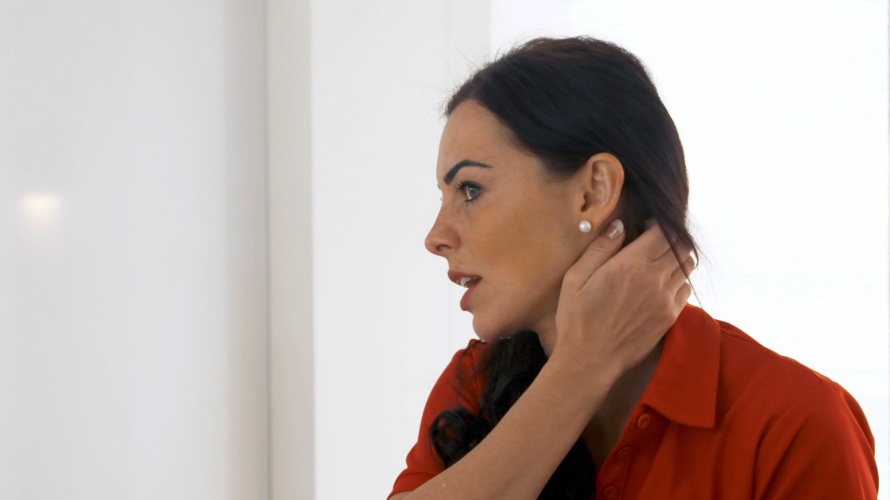 Natasha is now on her best behavior with Dave. But she can’t help but create a little more drama for herself by contacting her ex-boyfriend. You know, the one she cheated on with Dave on their last boat. Because now she’s realizing she may have thrown a grenade onto her life for no reason. She’s anxious to get as far away from the boat (and Bravo’s cameras) to have the conversation with her ex. But sorry, honey. You’re still mic’d. We can hear you crying all the way over there on the dock. She tearfully tells her ex how much she regrets what she did with Dave. And apparently he’s more forgiving than most people would be. Because he wants to work things out with her…

So Natasha essentially spends the remainder of the episode with her head in the clouds and thinking about her boyfriend. Even once the third charter officially starts. She’s constantly brushing off the other stews to text with him. To the point that it seems to be a detriment to her job performance? During the first lunch, Kyle loses his temper when he’s magically the only person on service. Because Natasha’s squirreled away tapping into her phone. Of course, Dave is oblivious that Natasha’s back in contact with the guy she apparently wanted to leave for him. And Captain Sandy doesn’t seem to catch her slacking off either. But if this continues, it won’t be good for her. 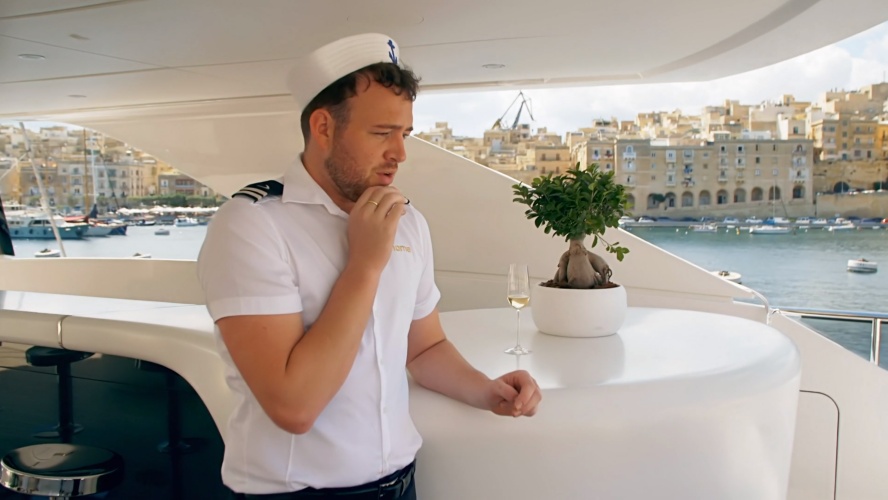 The third charter may officially be underway, but it’s off to a terrible start. The weather in Malta looks sunny and breezy. But according to Captain Sandy, that equals giant swells out at sea. So from the moment the new group of guests step on board, they have to stay on the dock. As always, this creates a rather stressful situation for the crew. How do you entertain guests who are paying thousands of dollars for a luxury yacht vacation when they’re stuck two feet from shore? If you’re Storm Smith, the answer is to get them back on land. It’s called an excursion!

So Storm, Mzi and Courtney round up the guests for a golf cart tour of historical Malta. Except there’s only a tour guide on one of the carts, so I’m not exactly sure how that worked in transit. It looked nice enough when they would stop and get out. But in reality, it was just an excuse to get the guests off the boat and take the pressure off. Kyle also went to great lengths to keep them entertained back on board. Even with a toothache that put him in quite a foul mood.

Clash of the Nats 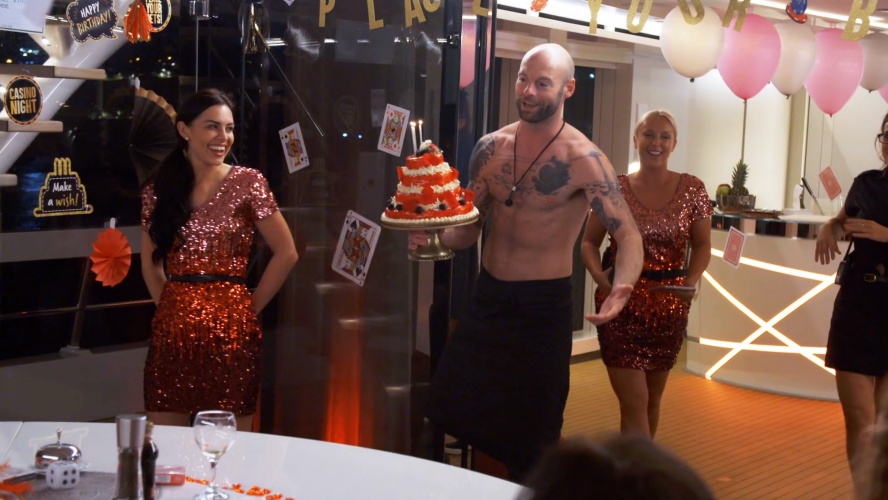 Oh wait, did I just say the pressure was taken off the crew? That was only while the guests were zooming around the island. Once they return, the interior still has to throw a joint 50th birthday party for the primary and her cousin. Because they’re from Vegas, Natalya Scudder decides to go all out and create a casino-themed night for the guests to remember. The (other) second stew is always anxious for the guests to ooh and ahh at her decorations. And she always wants to be there to see their reactions. But when Natasha sends Kyle to bed early on account of his toothache, it sets off a chain reaction resulting in Natalya feeling, well, less than appreciated.

With the interior one person down, Natasha asks someone on the deck team to fill in for the night. And surprise, surprise, that person happens to be Courtney. You can’t say she doesn’t have the necessary experience. But because she doesn’t know the boat yet, Natasha asks Courtney to stick with her for service. And sends Natalya below deck to spend the night in housekeeping. Which is precisely the opposite of what she wants to be doing with her night. Courtney even has to wear the sparkly pink dress Natalya already has on. The slight leads to the first little tiff between Natasha and Natalya. And Natalya running down to Kyle‘s bunk to complain. Hmm…looks like there might be cracks in the boat’s self-described “power team” after all.

While Natalya‘s doing turndowns, the rest of the crew gets undressed for the guests’ birthday party. Namely most of the male crew members. Because a preference sheet is forcing Mzi to once again be a stripper. This time as a firefighter with Storm in a matching uniform. And Chef Dave ends the night by serving dessert shirtless. The all-female charter group goes gaga. Everyone’s happy except Natalya, basically.

Another Day, Another Dolphin 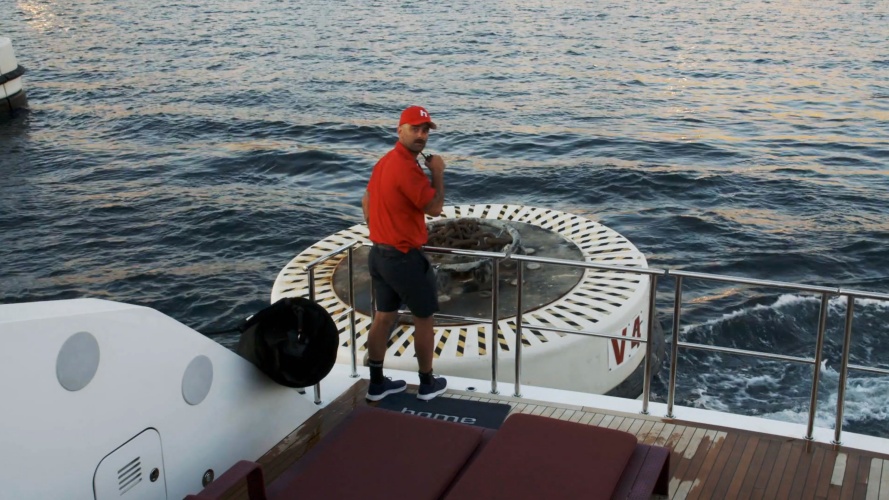 The next morning, the weather has calmed significantly. So the boat can finally head out for the second and final day of the charter. Storm‘s understandably nervous about being in charge of getting the boat off the dock for the very first time. But he’s bound to do a better job than Raygan Tyler, right? Mmmm…you’d be surprised. He runs through the game plan with Captain Sandy and seems prepared. The Bravo gods are determined to work against him though, and his radio starts cutting out as soon as the boat begins moving. Or maybe Raygan cursed the yacht as she was leaving?

Captain Sandy seems to think it’s Storm who doesn’t know how to work the radio. But hasn’t he communicated just fine up until now? Either way, communication is less than ideal as she’s bringing M/Y Home off the dock. Jason Gaskell‘s successfully communicating from the bow with hand signals. But Sandy can only hear roughly every other word Storm’s trying to say over the walkie. And as if it couldn’t get worse, the boat is headed straight for one of the concrete dolphins. Again. Just like last time. Storm’s warnings to kick forward are useless. And the episode ends with the boat once again driving straight into a dolphin. This time on Storm’s watch. Oops. So much for proving you can be a bosun, huh?

TELL US — WERE YOU HAPPY TO SEE COURTNEY RETURN? IS IT WISE FOR NATASHA TO GET BACK TOGETHER WITH HER EX-BOYFRIEND? WAS NATALYA THROWING A TANTRUM OR WAS NATASHA BEING UNFAIR? SHOULD STORM BE PUNISHED FOR THE BOAT HITTING ANOTHER DOLPHIN?

Below Deck was a little show featuring the work and play lives of a deck crew on a motor yacht.…
Reality News 7 days ago