Erika Jayne was in NYC this week to host the Barefoot Wines Love Party and while she was in town she made the rounds at Sirius XM Radio.  She stopped off to chat with both Jenny McCarthy and Bullseye, dishing on everything from her marriage to Yolanda Hadid’s exit on RHOBH and reveals that Yolanda had another surgery recently.

On the Bullseye show Erika says “Of course I’m sad that she’s not coming back. That’s my friend. But, she’ll be there in spirit.” She then adds, “she may pop up from time to time. We never know who’s going to show up and that’s the beauty of it, it keeps you on your toes. You gotta be ready.”

Has she seen the ladies lately? “Yes, I had drinks with Lisa Rinna and Eileen.”  But she shares that she hasn’t seen Lisa Vanderpump at all yet.

They ask her about the way she stuck by Yolanda’s side throughout the season. Erika says “If I love you, I love you. And we’re going to go down together.” She adds, “Yolanda’s a lovely person. She’s getting stronger but she still isn’t ‘there’, you know?” Erika says it was hard because she spent a lot of time advocating for Yolanda when she wasn’t around much.”

On her favorite memories of last season Erika says that there were a lot of great moments, but Dubai sticks out as one of those once in a lifetime experiences and it was a lot of fun.  She was glad to have her glam squad along, calling them her “gay refuge” when things got overwhelming. But she says she was there to do a television show and she was there to do her job.

She reiterates that she never watched the show but she did know of the women on the show.  The interviewers were telling Erika that she NEEDS to go watch the season 1 craziness with Alison DuBois at the dinner party at Camille.  Erika admits that she’s met Faye Resnick twice and thinks she’s lovely.

Erika shares that she has no regrets over her first season on RHOBH. “Sometimes I got a little fiery when I shouldn’t have or lost my cool a little bit, but no.”

She gives Lisa props for all she’s done to support the LGBT community, “she should be commended on that.” She says there’s no battle between them over the gay community. “It’s not about control, Lisa’s been there a long time, I’ve been supporting a long time. It’s important that there’s more than one person supporting the community.”

Erika doesn’t answer when asked if she’s filming currently (because she can’t say yet, obviously), but says that if she WERE going to be filming for the next season, it’d be starting very soon…  On how she’d feel to re-enter the Housewives world, “I’ll say this: I had a great time. I had nothing bad to say. Obviously it’s done so much for me. It’s brought such a great new audience. I have nothing but great things to say.”

On the RHOBH cast sort of judging her, assuming she was “one thing” and then flipping the script on them. “I think they expected one thing and let that be a lesson to all of us to give everyone a real chance, just because you don’t like the way someone looks, doesn’t mean that there’s not someone there that you could become friends with.”

Erika says her summer will mostly be spent touring and recording music. She says she has two new songs she just finished and will be shooting another music video soon.  When asked if she’d write a book, she says “What about? What the f*** am I going to say? How to be loud and obnoxious?”

She does spill at the very end that we are definitely getting some new housewives this season. 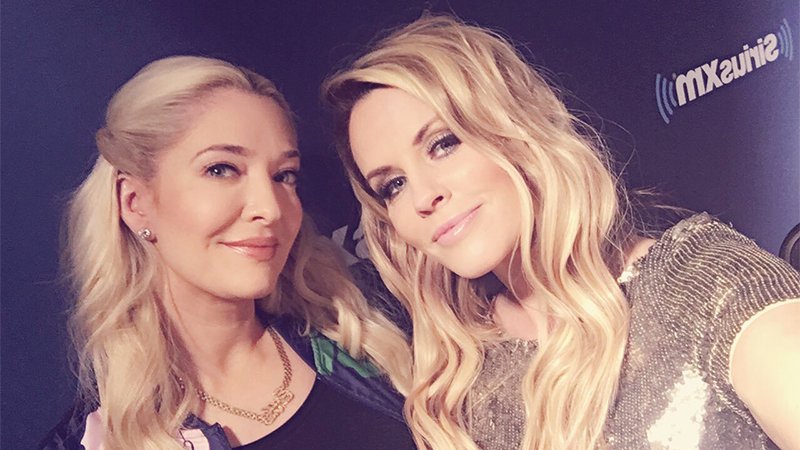 Jenny starts off asking Erika if she had any hesitations doing the show, thinking it might ruin her reputation? “No, because when I went into the show I really had nothing to lose. I hadn’t really come to that point in my career. I just showed up and all I could be was myself and there you go.”

They talk about Luann’s RHONY “Before They Were Housewives” special and Erika says she’d do one if it was pitched the right way and they wanted to show the REAL story and I could actually have some control over that, sure.”  Jenny asks her to share one thing about her past that people wouldn’t know about her. “Well, I struggled for a long time being an artist for a long time and I think that putting one foot in front of the other every day for years is tough sometimes. And then I took a ten year break and I was actively Mrs. Girardi at Tom’s side for ten or twelve years and then coming back to that is really the story.” She says Tom was absolutely supportive of her pursuing Erika Jayne again.

Erika talks about meeting Tom and how compatible they were, etc. Jenny asks how old Erika’s son was when she married Tom. She says about 4 1/2 or 5 years old. Jenny says “So your son had to move in eventually?” “Well, so my son was educated here in New York City and I was back and forth every two weeks.” Jenny says “But not as a child?” Erika replies, “Yeah, he grew up in New York City. I was living in Los Angeles, so I was back and forth and then he was with us summers, Christmas, spring break, winter break and now he lives with his mother in Los Angeles.”  Jenny says it had to be hard because as single moms it’s hard to introduce your kids to your boyfriend because if the kid doesn’t like the guy, you’re screwed. Erika says that it was no problem because Tom and her son are the same. “They’re very close and they’ve been close since my son was six years old.”

Jenny then dives into the Yolanda pool.  Jenny heard it wasn’t Yolanda’s choice to be off the show, but Erika corrects her and says it was definitely Yolanda’s choice not to return.  Erika says that Yolanda is feeling good and getting better. Jenny says that she feels Yolanda’s recovery happened awfully quickly. Erika is silent for a minute and then says “she is NOT 100%. She’s got a long way to go, she just had another surgery like two weeks ago. I don’t want to say what it is because that’s not fair for me to say.  But she’s not 100%. She’s still fighting.” She says that she just talked to her two days ago and will see her on Sunday.  I’m assuming this is her tonsil removal that Brandi Glanville shared on Watch What Happens Live.

On a new Housewife coming on to replace Yolanda, Erika says she’s not afraid of a newbie because it could be someone wonderful.

Erika gushes about Tom for a while, saying that he’s a good man and loves helping people and then reveals that she did not sign a prenup. She says they’ve been together for 18 years. She says that they never had kids together because her son was her priority and she raised him well. She also shared that Tom is a little fascinated with the Real Housewives of New York and watched it when he had some time off work for an oral surgery.

On who is the most intimidating RHOBH star: “Every one of them can be intimidating. Everybody’s different.”

TELL US – ARE YOU EXCITED FOR A NEW SEASON OF BEVERLY HILLS WITH NEW HOUSEWIVES? WHO DO YOU WANT TO RETURN?

Real Housewives of Beverly Hills star Kyle Richards has been taking heat for her body transformation. She posted some steamy…
Reality News 3 days ago