Below Deck Mediterranean Season Finale Recap: Let’s Get Off This Boat

This is it, yachties. Congratulations. We’ve done it. We’ve reached the end of this seemingly never-ending charter season on Below Deck Mediterranean. Is it just me, or has it been the longest season in Below Deck history? (It has. I just checked.) And with a two-part virtual reunion to go, we’re not technically done yet, but as they say on the high seas, a finale is a finale is a finale. (Do they say that though?)

Maybe the season just felt extra long coming after the first season of Below Deck Sailing Yacht, which I actually quite enjoyed. Maybe the near-constant cast turnover made it feel like the season never got its sea legs. Or perhaps it was the combination of Tom Checketts‘ spoiled brat tantrums mixed with Rob Westergaard and Jessica More‘s confusing relationship drama that dragged the season on and on. Yeah, it was definitely that.

For a season finale, this week’s episode sure felt disjointed. On one hand, it feels like very little happened story-wise. On the other, while everyone else was trying desperately to wrap their storylines up in a bow worthy of Bugsy Drake‘s tablescapes, The Wellington’s most toxic lovebirds were bound and determined to keep the dramatics going to the very last second. 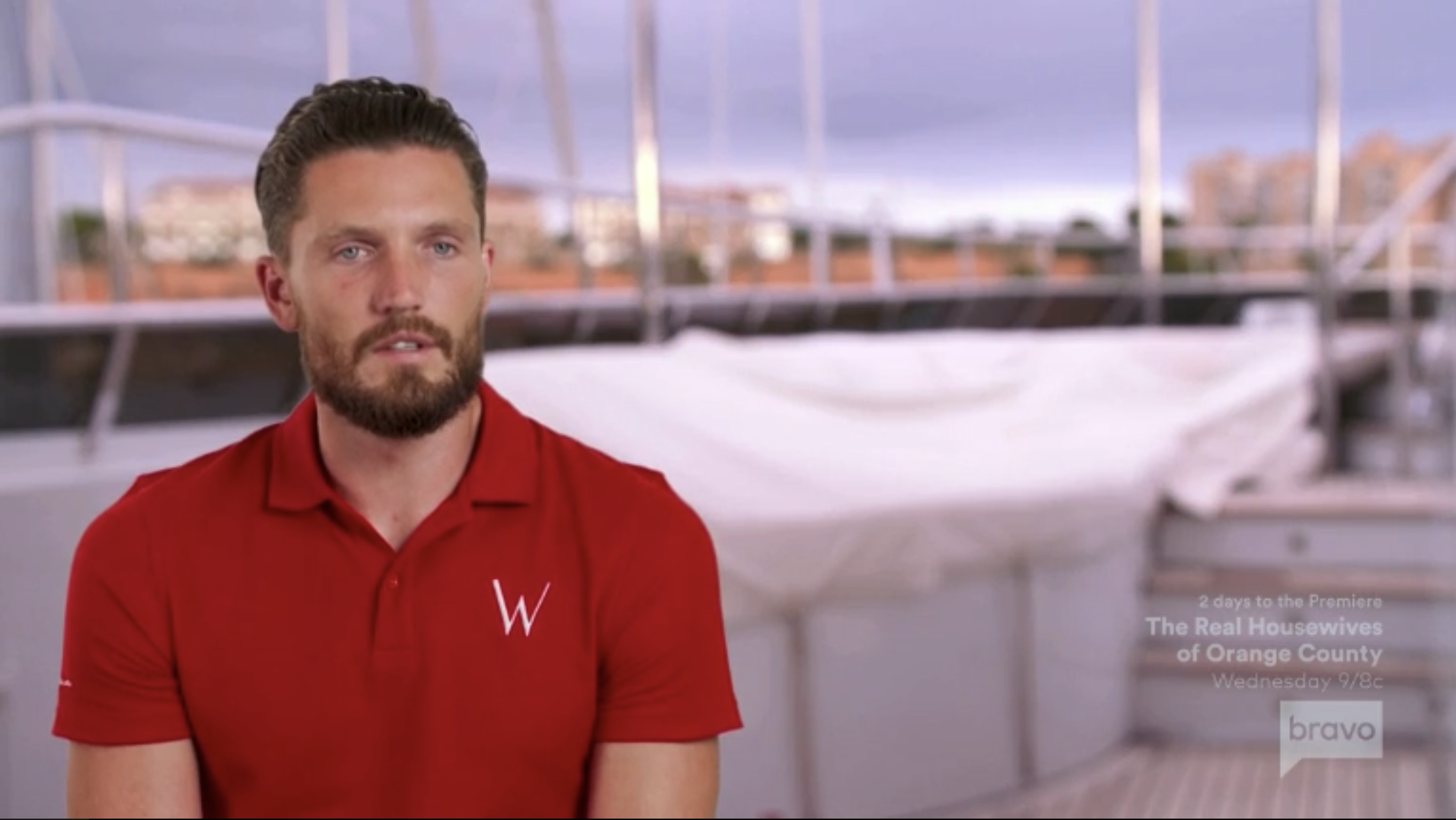 The episode picks up fresh off Rob‘s decision to make the crossing to the Bahamas. It’s a choice that could have long-lasting effects on his relationship with Jess. Perhaps purposely so, like one last torpedo putting a sinking submarine out of its misery. But for some reason he decides not to tell her right away. The crossing is only two weeks. For reference, that’s a literal one-third of the entirety of Rob and Jess’s six-week boatmance. But the deckhand thinks it will be good to get some space instead of going to Bali and I have to say, I concur. I strongly concur.

Rob‘s not the only crew member figuring out his future. Captain Sandy Yawn lets Malia White drive the ship out of its final anchorage to keep fueling her dream of becoming a captain. Bugsy‘s reflecting on the challenge of being promoted to chief stew mid-season. Aesha Scott surprisingly declares that she might be done with yachting for good. And Tom? Tom claims he’s never been more stressed than he was during the two whole weeks he worked this job. Oh, and he also blames his constant meltdowns on “psychologically taking charge” of the stress in the galley. Raise your hand if you think that worked. No one? 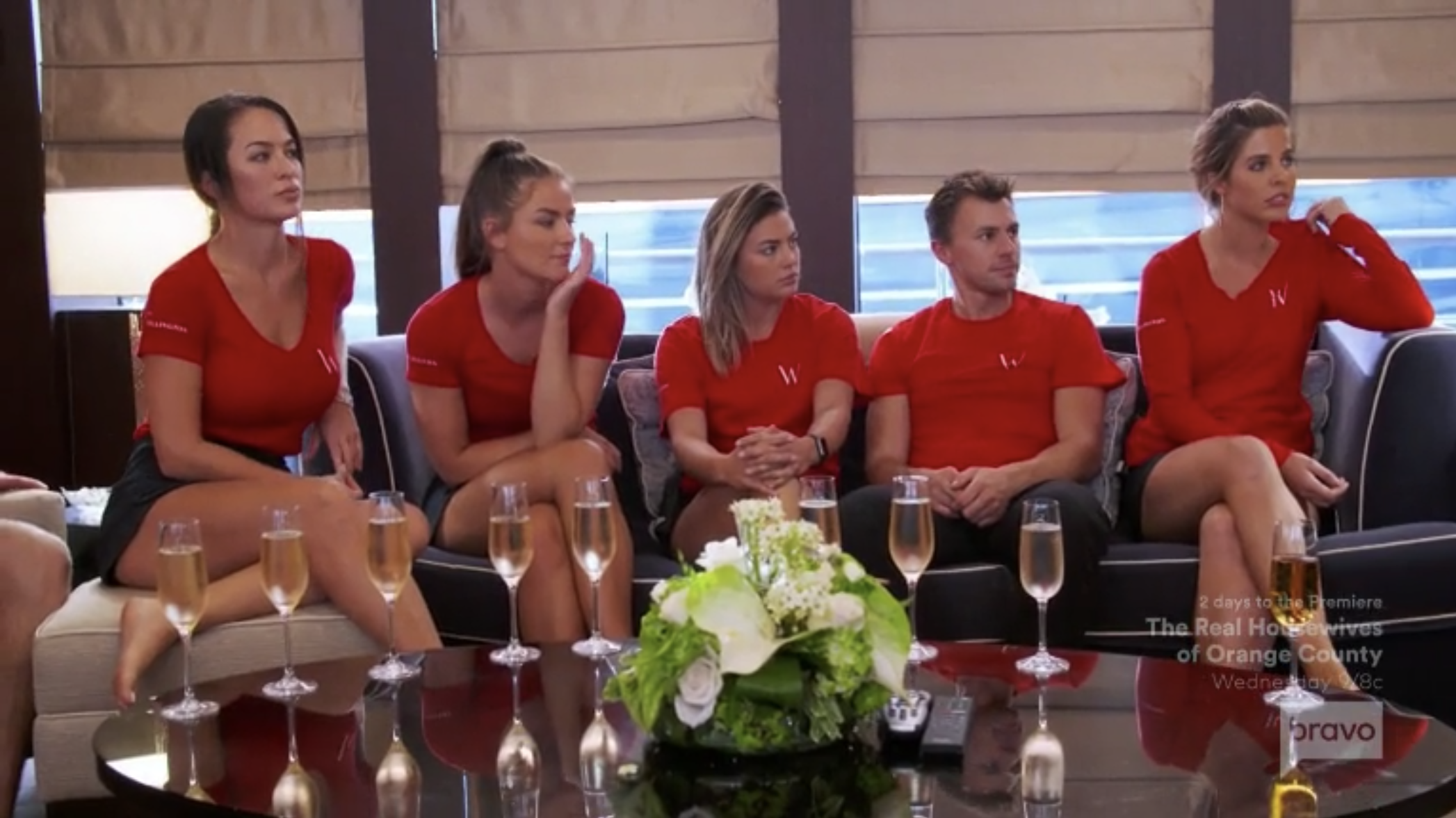 After the final docking (complete with a too-close ground line), the crew says goodbye to the final round of charter guests and are ready to wipe their hands of serving people hand and foot for another year. At the last tip meeting, Sandy admits she wanted to end the season with the same crew she started with. Obviously that didn’t happen, considering that half of the faces starting at her weren’t on board in the premiere. The final tip from the mom gang was a whopping $20,000, bringing the grand total for the season to $171,500. For those keeping track at home, that equals roughly $14,000 per crew member for the season. Not bad for just six weeks of exhausting, round-the-clock work. Sandy also gives out handmade awards to the crew based on the Beaufort wind scale. Somehow Rob is a 0 and Tom is (unsurprisingly) a 10 with everyone else in the middle, but Bugsy, Malia and Alex Radcliffe seem to get the real MVP shout-outs.

And just like that, it’s time for the last night out in Palma, with Sandy joining the crew for dinner. Rob wants to have just one good night, but Jess already has the sinking feeling it won’t go well. (Self-fulfilling prophecies are real, people.) They’re squabbling in the cabin before they’re even dressed, and end up taking separate vans to the restaurant in tears. At dinner, a somewhat delusional Tom tells Sandy he hopes he “never came across as rude.” Dude, how did you think you were acting all season? I’d truly like to know and hope he gets dragged for his behavior at the reunion. However, Captain Sandy is all love and light, and says she’s just proud that none of the drama ever permeated to the guests’ experience. 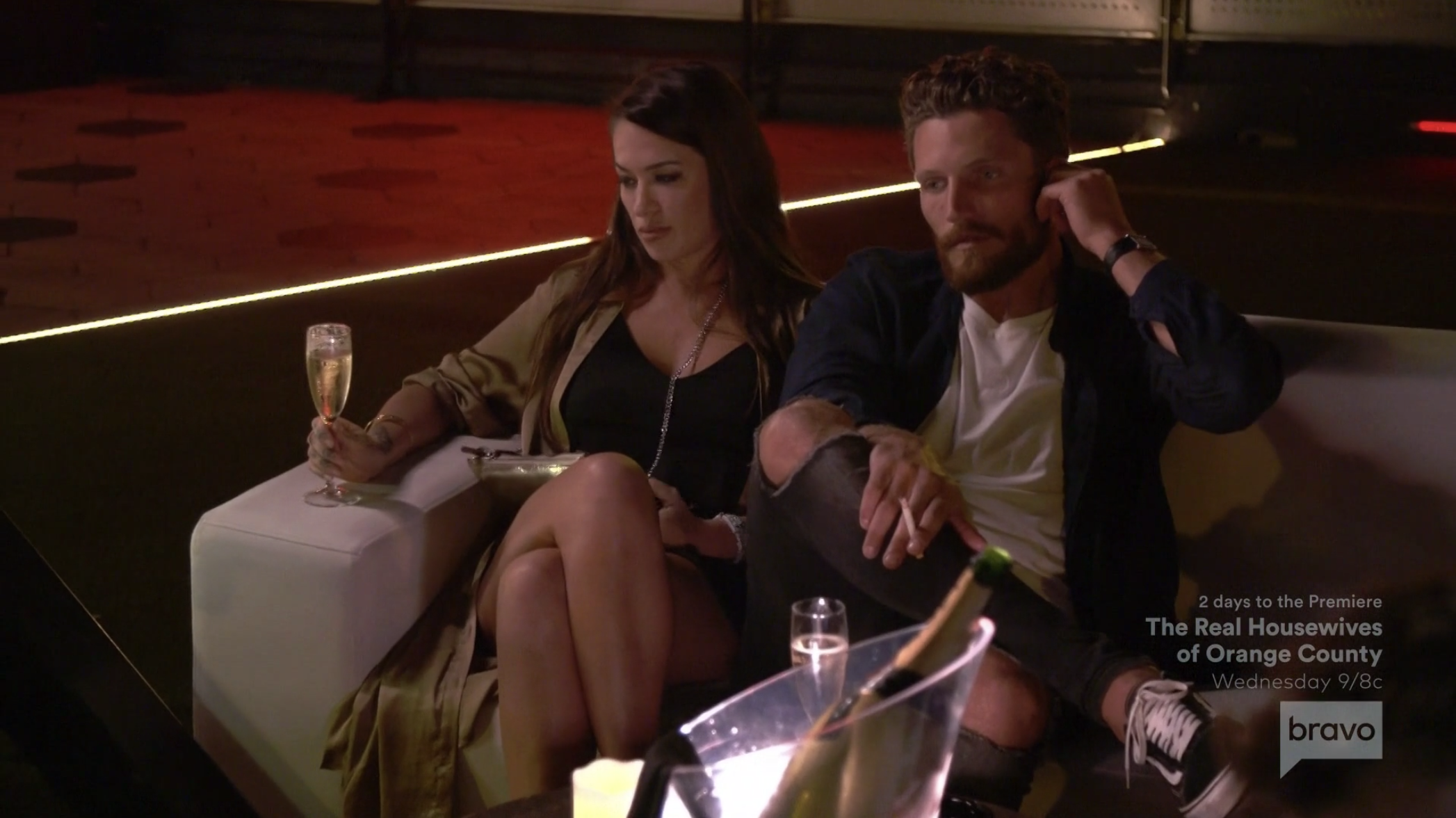 Sandy exits stage left after dinner and the rest of the crew hit the club one last time. And just in time for Jess to pick yet another fight with Rob — comparing him to her mother this time — guess who shows up? The mom gang. That’s right, the charter guests weren’t quite ready to say goodbye to the crew (or Bravo’s cameras, probably). While Bugsy and Alex make out in a corner, one of the guests steals Rob’s attention, making him smell her shoes (um, what?) and calling him a “beautiful soul.” Naturally, this causes Jess to positively seethe in jealousy, ultimately throwing her cigarette at the woman who just handed her and her colleagues $20,000 in cash earlier that day. The drama continues escalating on the way back to The Wellington. While Jess storms to her cabin, Rob breaks down in tears on the dock with Malia trying to play peacemaker. In the immortal words echoed on Scary Island, everyone just needs to “GO TO SLEEP!” at this point.

On departure day, Rob and Jess are barely speaking. Which is the perfect time for him to break the news that he wants to do the crossing instead of go to Bali with her. Jess tearfully begs him not to do the crossing and spitefully accuses him of running away from their love. However, Rob philosophically points out that “heartbreak is a gift” or something, and that’s what he’s giving both of them. He also claims he has two more days to decide what to do, but like…bro. You already told the silver fox first mate you were going. He said he needed to know ASAP to lock down your spot on the boat. This is one of those “no-take-backsies” moments in life. 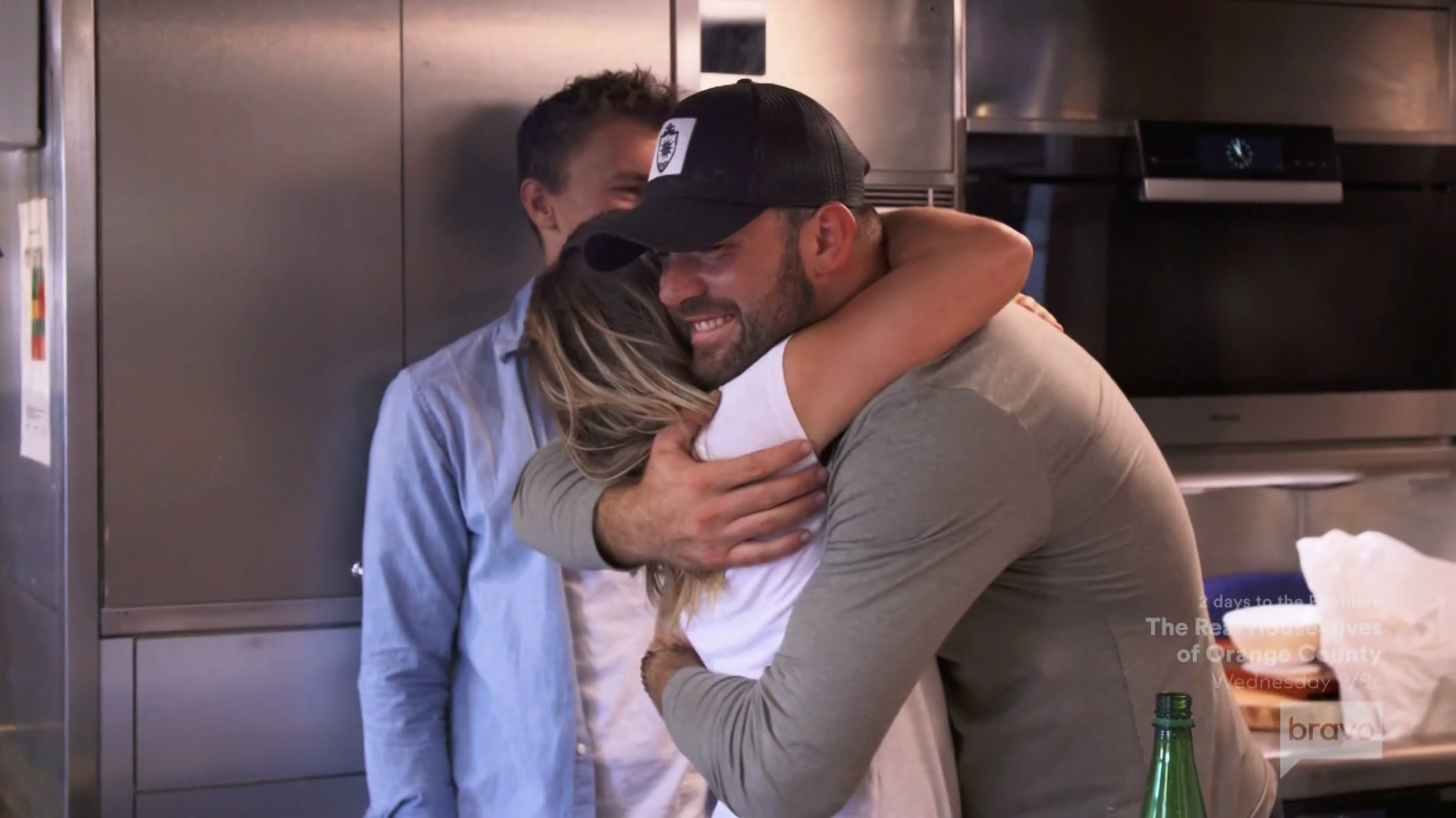 Everyone else spends their last morning avoiding the couple’s drama and saying their goodbyes. Alex is the first to leave and even gets a cute goodbye kiss from Bugsy. I just have one thing to say to Bravo. Bring Alex back as lead deckhand next season! And also Bugsy as the permanent chief stew, probably? But if I had to pick one, I’d say please keep the Jersey teddy bear on my screen for as long as possible. And then, out of nowhere, Rob and Jess are suddenly leaving The Wellington together. Like nothing at all has happened in the last few days. And guess what? Rob goes to Bali instead of doing the crossing. Blah. Apparently they broke up shortly after the trip. Or on the trip? No one really knows at this point.

As for the rest of the crew, everyone is still working in yachting with the exception of Aesha, who went home to New Zealand and is now spending the pandemic living in a converted ambulance with her new boyfriend in Colorado. Bugsy is a chief stew on a yacht in the Bahamas. Alex worked as a lead deckhand on a private yacht. Tom and Malia broke up. Because Tom cheated. We also get an update on sweet Kiko Lorran, who bounced back as a chef on a catamaran in Martinique. And Hannah Ferrier‘s first baby is due basically any day now! And that’s a wrap on the season…until next week’s reunion!

TELL US – ARE YOU SURPRISED ROB WENT TO BALI WITH JESS? WHICH CREW MEMBERS SHOULD COME BACK NEXT SEASON?

Below Deck was a little show featuring the work and play lives of a deck crew on a motor yacht.…
Reality News 7 days ago