Can you believe it’s been almost two weeks since we had a new episode of The Real Housewives of Salt Lake City to obsess over? For anyone who joined the watch party of Real Housewives of Salt Lake City Episode 3 on Twitter the day after the second episode aired, it feels like an eternity. I’m sure you were all dying to know how Whitney Rose‘s 1920s party ended. And believe me, whether you waited thirteen days or seven, it did not disappoint.

Jen Shah was itching for a fight at the end of the last episode, and she finds one this week with Meredith Marks. Pulling her pal aside, Jen wastes no time laying out all the issues she’s built up in her head over the last few days. She’s angry Meredith cancelled their sleepover. She doesn’t believe Meredith really wanted to spend time with her kids. She’s angry Meredith went to Mary Cosby‘s church. In fact, she’s angry Meredith’s struck up a friendship with Mary at all.

Of course, this is all news to Meredith, who’s completely blindsided at the level of Jen‘s anger toward her. Calmly and rationally, she tries to diffuse the tension by suggesting they talk about this another time. (Really, she’s trying to spare Jen the embarrassment of talking about how bothered her kids were with the drama queen’s high kicks in their living room. You know, like a good friend. But Jen doesn’t know this.) Instead, Jen explodes, drawing a line in the sand. Meredith has to choose: it’s her or Mary. 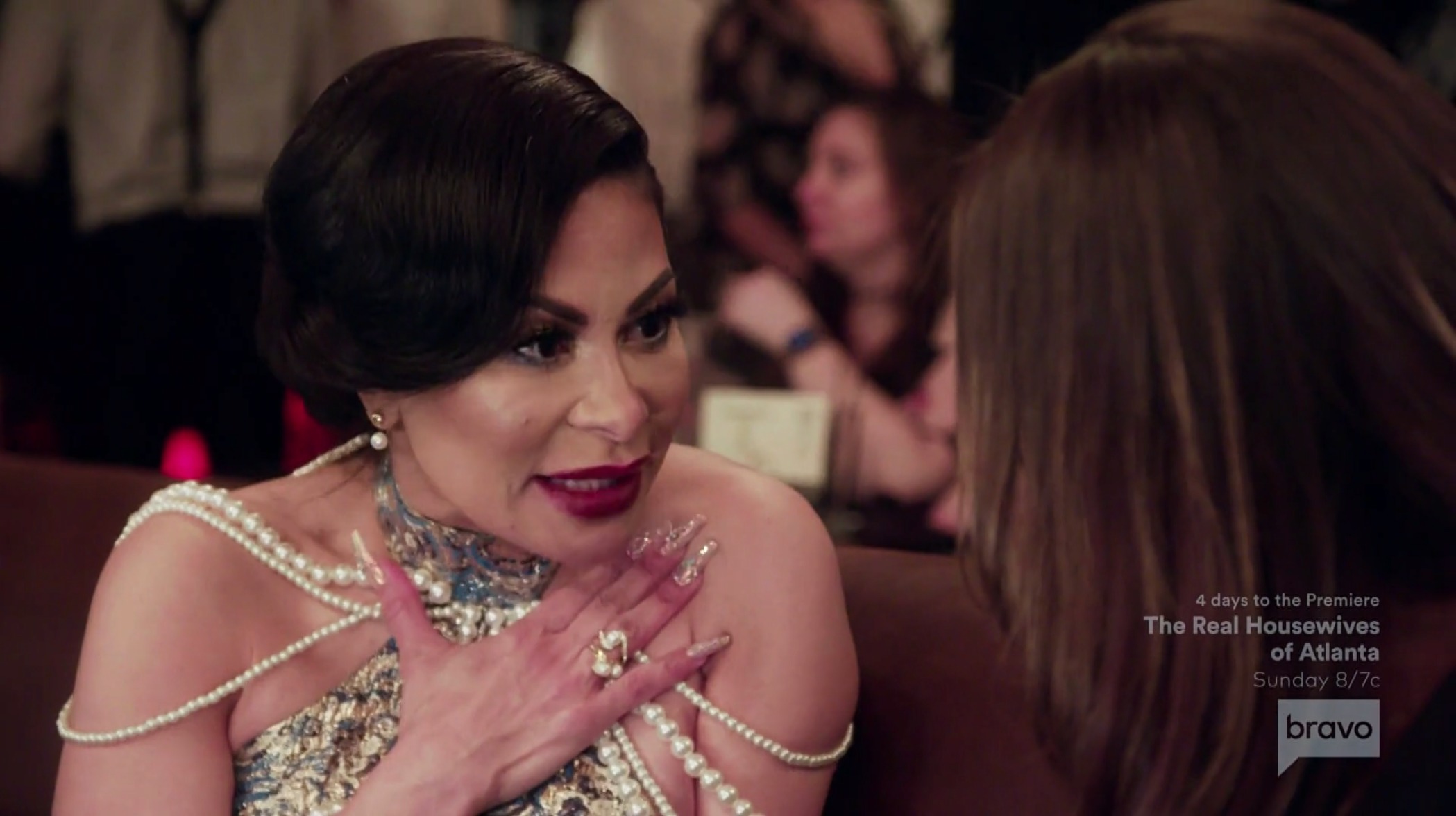 However, Meredith refuses to take the bait. Instead, she announces that she’s disengaging from this nonsensical fight and coolly extricates herself from the drama. This only goes to further inflame Jen‘s anger and she immediately lashes out, screaming for the whole party to hear that Meredith is choosing Mary, who “f**ked her grandfather!” Yikes. Talk about shots fired. All of the ‘Wives condemn Jen’s outburst via confessional, but wisely steer clear of confronting her at the party. Because at this point, there’s truly no reasoning with her. Instead, Jen storms out of the party in a huff, with Sharrieff Shah arriving in a getaway car to whisk her home. The saddest part of the whole ordeal, though, is that her incredible 1920s madam-style dress was entirely wasted on such an insane fight…

The next day, all of the ‘Wives rehash the drama in pairs. Mary boils the crux of Jen‘s animosity towards her down to one thing: competition. According to her, this bad blood goes way deeper than hospital smell, grandpa-husbands and who gets to hang out with Meredith. And I’m starting to think maybe she’s right. Maybe the competition in Jen’s eyes is about having more allies on her team within the cast. But honestly, I’m most baffled by the sight of Lisa Barlow and Heather Gay sitting down for lunch together gossiping about the fight. Weren’t these two at each other’s throats just two weeks ago over whether they knew each other? What happened to the good time girl and the BYU Honor Code? How did we get here? A guy needs more narrative resolution before you casually spring a one-on-one sit-down on him like this, Bravo! 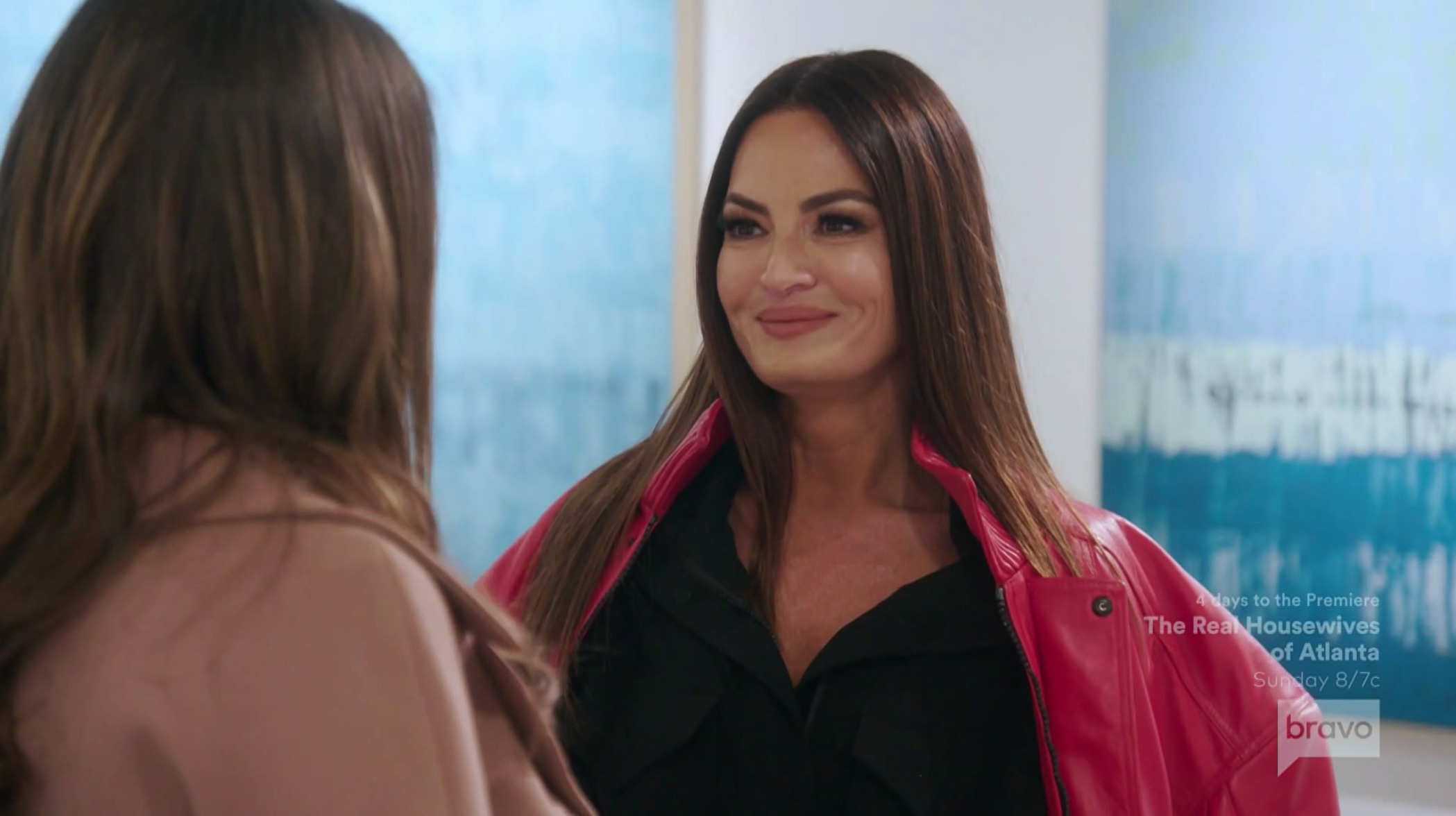 Later, Meredith finally breaks the news to Lisa that she and Seth Marks are separated during an outing to an art gallery. Jen already knows this (more on that in a moment) but upon finding out, Lisa promptly dissolves into tears. Despite the sad circumstances, it’s quite a touching moment between the two BFFs. As Lisa explains in her confessional, their two families truly do go way back and she’s genuinely hurt that her best friend is hurting. She even pulls out the classic line of “What can I do for you?” used by Mormon visiting teachers — oops, I mean ministering sisters — everywhere. (Listen, if you know, you know.) Except in this case, Lisa really means it.

Meanwhile, Jen heads over to Heather‘s house to escape the crushing emptiness of the Shah ski chalet. Did I say that? I meant “to defend her behavior at the 1920s party.” And it’s all fine because she got sushi delivered, OK? While Heather makes a classic Mormon green bean casserole, Jen justifies her wild outburst. She admits she’s lonely with Sharrieff being gone all the time for football. He even missed her dad’s funeral last year because he had to go to a game. And since it happens to be the one-year anniversary of his death, the wound is particularly raw in Jen’s heart.

The one thing she doesn’t do is acknowledge any wrongdoing on her part. In fact, she’s still disappointed in Meredith‘s perceived lack of loyalty. So much so that she’s downgraded her from her inner circle to just a friend. But as Heather wisely points out in her confessional, this has nothing to do with Meredith and everything to do with Jen misdirecting her anger at her absent husband. Out of anger, Jen also spills the tea to Heather about Meredith’s separation. Which feels like a bigger betrayal than going to Mary‘s church could ever be, but maybe that’s just me? 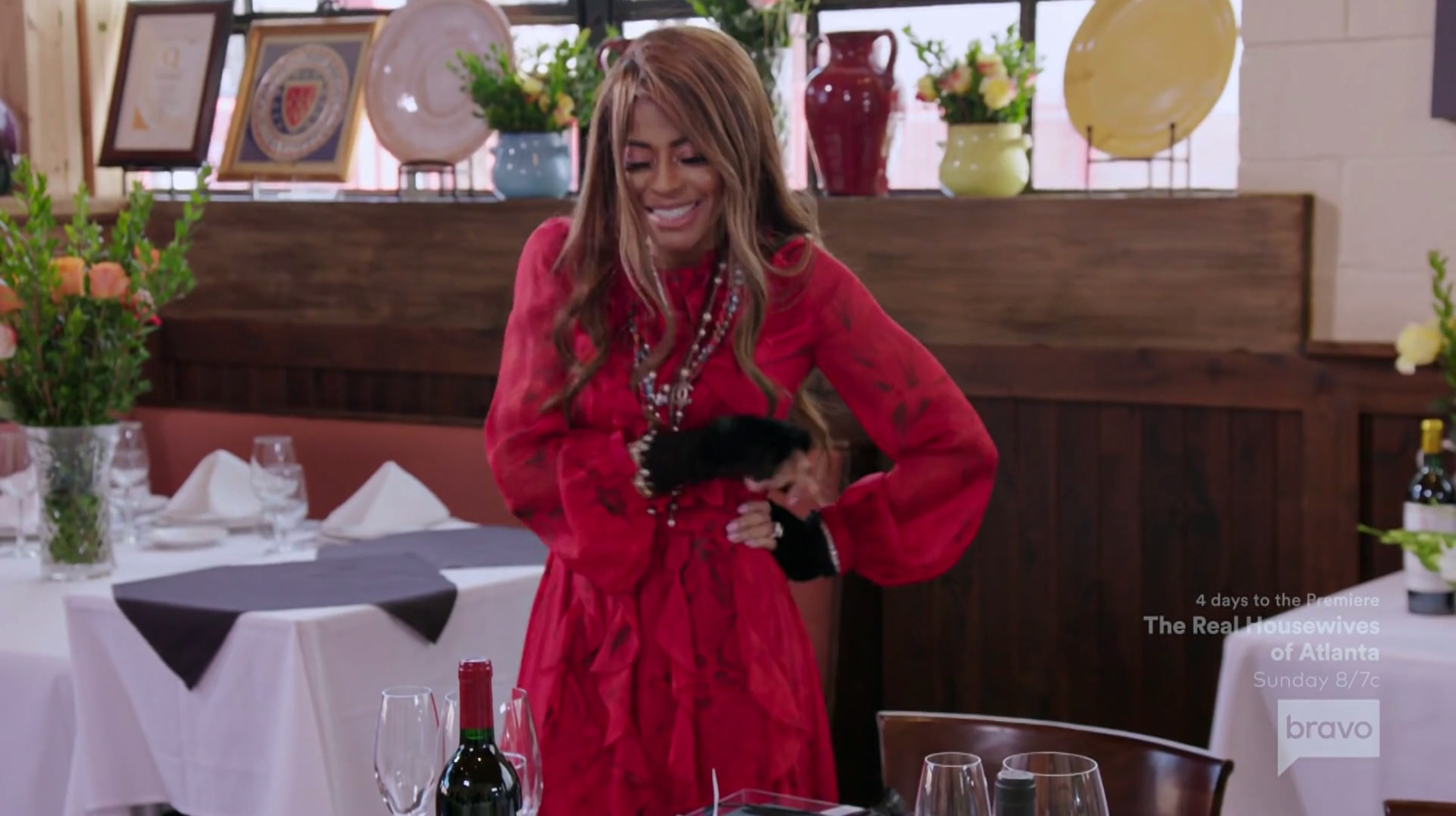 To get all the ‘Wives in one room, Mary decides to host a Met Gala-themed luncheon at Valter’s Osteria. Fun fact for those who don’t know: Valter’s is commonly known throughout the Salt Lake food scene as probably the best restaurant in the city — maybe even the state. Valter himself is something of a local celebrity. So while her fashion choices may continue to be, ahem, choices, I can at least confirm that Mary’s culinary taste is on point. That being said, there are a number of head-scratching anachronisms happening with this midday Met Gala theme. And I feel qualified in pointing them out because, as any friends reading this know, loving the Met Gala is nearly as much a part of my personal brand as loving the Real Housewives.

I’m willing to bet Anna Wintour’s entire Vogue salary that Mary doesn’t actually know what the Met Gala is. For one thing, it famously takes place on the first Monday in May. Filming for Mary’s luncheon happened in December 2019, maybe January 2020. My birthday also happens to be in the first week of May, so the dress code of my birthday party almost every year is dictated by that year’s theme. “Camp: Notes on Fashion”? Check. “Heavenly Bodies: Fashion and the Catholic Imagination”? Double check. How many themes do we think Mary can correctly name off the top of her head? Because “Ostrich feathers” isn’t a theme, darling.

RELATED: Real Housewives Of Salt Lake City Star Meredith Marks Admits That She & Her Husband Have Dated Other People For Years; Says “Our Own Children Didn’t Know We Were Separated”

It’s also just a sad reminder that this year’s Met Gala — whose theme was set to be “About Time: Fashion and Duration” — never happened because of the coronavirus pandemic. But let’s be honest, if 2020 did have a Met Gala, maybe it would end up looking like Mary‘s midday, cocktail attire luncheon. Although I for one have never seen human nutcrackers dressed as British guards working the valet at the Met. But I digress. So yes, maybe I just spent an entire paragraph ranting about how none of this makes sense. But let’s just roll with it, shall we? Because like Heather and Whitney say, Mary is weird. And this luncheon is just…oh so perfectly Mary. 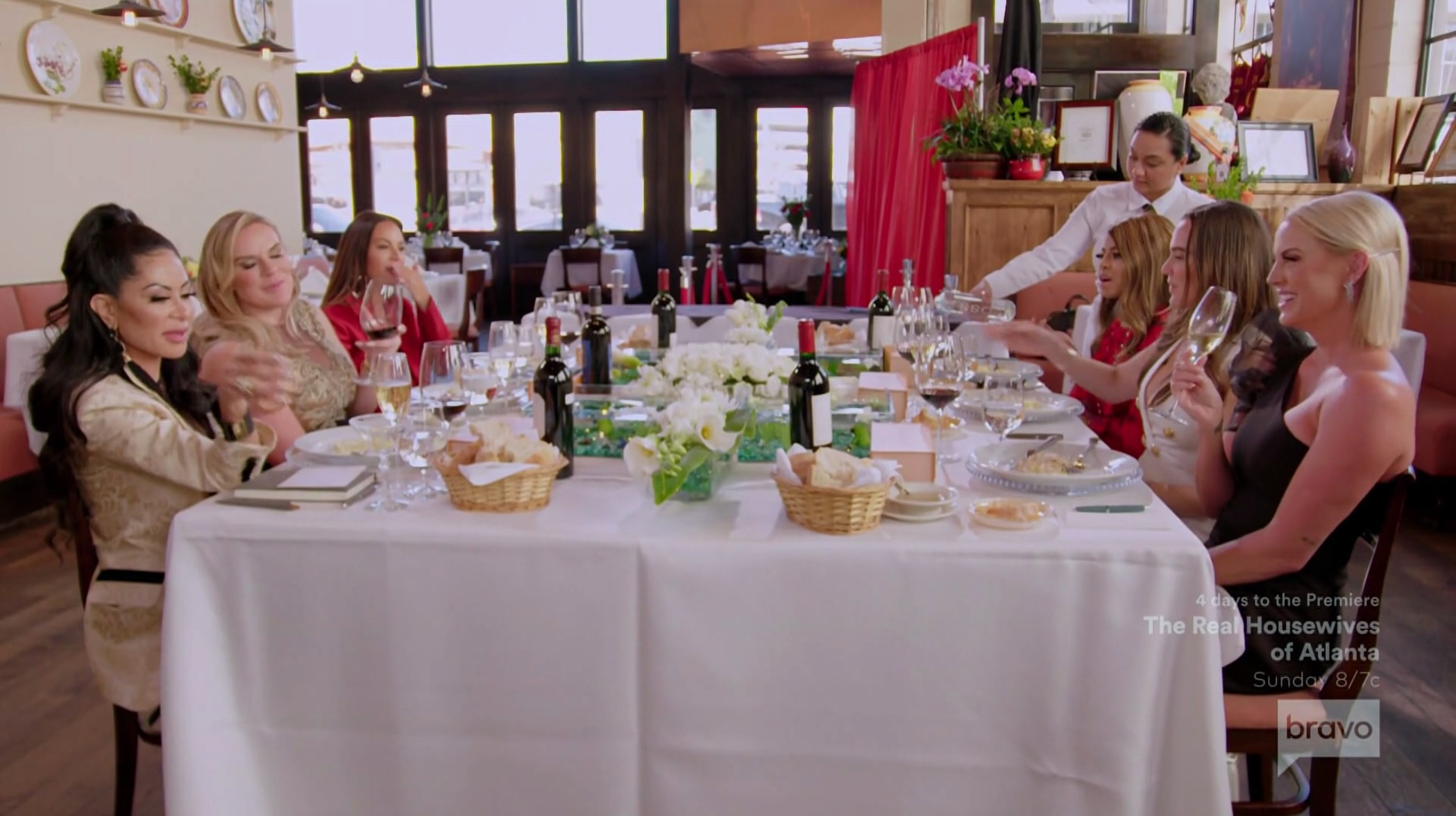 The ‘Wives all arrive in their most ostentatious cocktail attire. And Mary immediately gifts them with empowerment journals, personalized pens and Louis Vuitton-branded AirPods. Because they all need to listen to each other better. Or something. I don’t know, I’m distracted by Mary’s oddly chipper claim that a heatwave killed 5,300 people for the 2003 Dom Perignon the women are drinking. (Someone needs to confirm whether that story is true STAT. I must know.) The funniest part of the luncheon, though, has to be Jen accidentally saying “amen” in the middle of Mary’s tearful prayer. I’m still cackling about it as I write this.

After saying grace, Mary makes everyone go around the room and share something vulnerable about themselves. She talks about her issues trusting other people. Whitney shares that she’s trying to care less what other people think of her. (Which is a very Utah problem, by the way.) And also, for the record, she’s not a swinger! Just a funny inside joke between her and Lisa, who gets choked up talking about the impossibly high standards she holds herself to. If only we all could have the same amount of unabashed confidence — or arrogance, if you’re asking Whitney in her confessional — as Lisa Barlow. 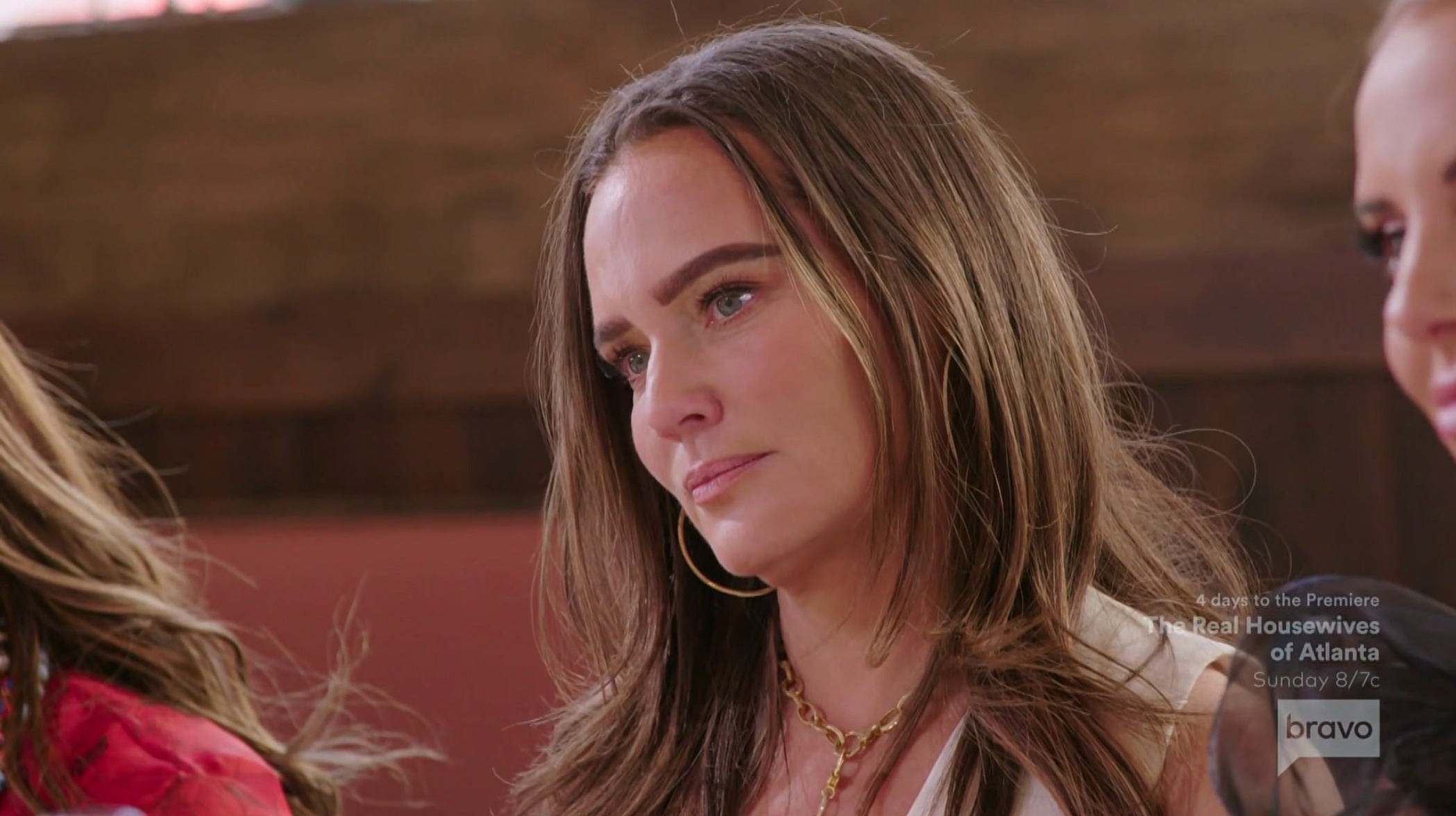 And then it’s Jen‘s turn. She delves into the struggles of growing up as a Polynesian girl in Utah. (Again, for the record, no one in Utah thinks Polynesian people are Black; it’s one of the largest minority populations in the state…) But being different made Jen feel like an outsider, which explains her desire for unquestioning loyalty and closeness in her friendships. In her mind, that’s also the reason why she’s so intense and prone to pop off at any given moment. Finally, Jen apologizes to Meredith for their inexplicable fight. However, there’s no apology coming for crassly attacking Mary‘s marriage in a room filled with flappers. At least not in this episode, because rather abruptly, it ends in the middle of Jen’s speech with a “To Be Continued…” Looks like Part 2 of the 2020 SLC Met Gala will have to wait until next week!

TELL US – WAS JEN’S OUTBURST TOWARD MEREDITH AND MARY JUSTIFIED? DID SHE CROSS A LINE BY REVEALING MEREDITH’S SEPARATION TO HEATHER? WHAT WAS THE BEST PART OF MARY’S MET GALA-THEMED LUNCHEON? DOES MARY EVEN KNOW WHAT THE MET GALA IS?

Jen Shah will have to “find herself another Heather Gay.” The Beauty Lab + Laser founder famously uttered the words…
Reality News 2 days ago

As we all know, the Real Housewives of Salt Lake City Season 3 has been nothing short of a DISASTER.…
Reality News 6 days ago