Love After Lockup Recap: The Virgin & The Trick 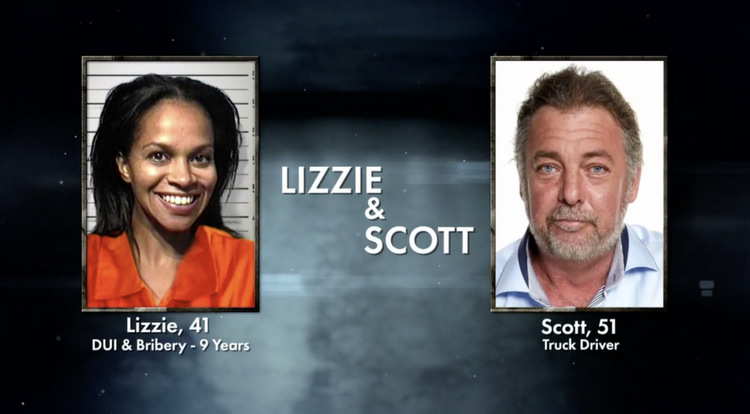 We asked, we believed, and we received. Love After Lockup is back with a new cast (and some familiar faces) for another season of love, prison-style. YES!!! From the producers who gave us 90 Day Fiance, Sharp Entertainment is bringing us a classic story of true romance: Boy meets girl, they fall in love, boy proposes to girl. Only one minor issue: Boy (or in some cases, girl) is incarcerated in the United States prison system.

If you enjoy hearing lines like, “I was cruising the internet one night and I stumbled across pictures of [prisoner’s name] on meetaninmate.com” as the introductory sentence to an epic love story, then this is the show for you. Our couples this season include two holdovers from Love After Lockup Season One – Scott & Lizzie and Angela & Tony – plus four new couples hoping to make it work on the “outside.” Let’s review who’s been pierced with Cupid’s homemade shiv this year. 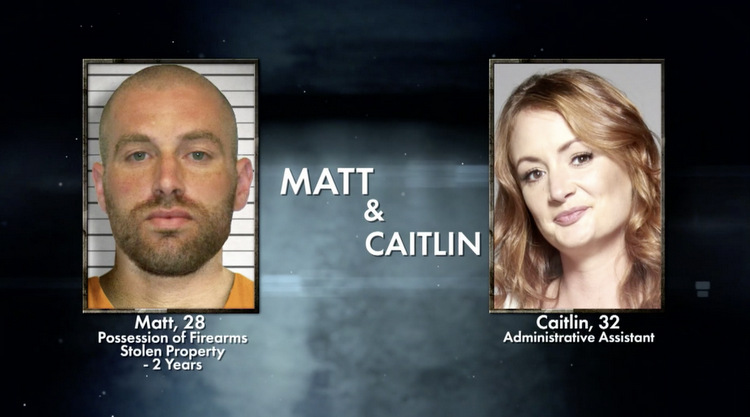 Caitlin’s only crime is having a Wifi connection and a penchant for prison websites. It’s there she spotted Matt, who’s serving a 2-year sentence for illegal possession of firearms. As she packs up to move to Matt’s mom’s home (which Caitlin’s own mom is not too happy about), Caitlin’s friend, Jordan, listens patiently to the delusion laid bare before her. “Aren’t you interested in seeing the size of his penis?” asks Jordan, which yes, Caitlin is! She’s only been “dating” Matt for 5 months, and their relationship basically consists of letters and longing looks across the metal tables of visiting hour. “It just seems really toxic,” Jordan tells the cameras. 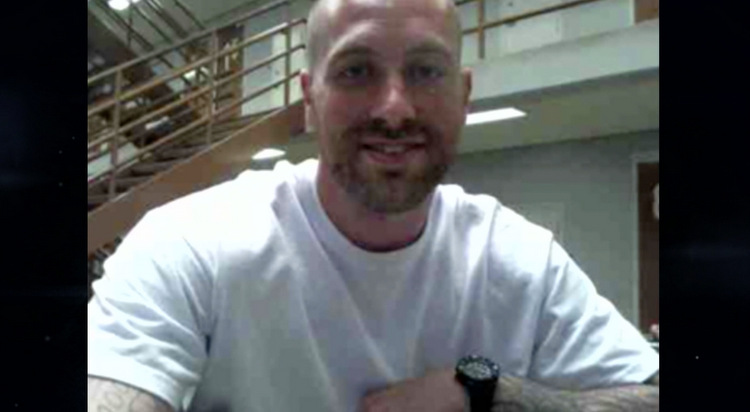 Caitlin doesn’t care if her friends and family think she’s crazy. She’s in LOVE! Since her mom kicked her out, she decided to move in with Matt’s mom. Only one problem: Matt doesn’t know about it yet. Caitlin thinks her master plan of living in Matt’s childhood bedroom in his mother’s house will work out fine, but when she gets there, Matt’s mom tells her some harsh facts.

She reminds Caitlin of the OBVIOUS FACT that she and Matt really don’t know each other, so they’re going to struggle to adjust to “real life” when he gets out. Mom is a realist. Her son being released twice in the past from prison, only to return again. He’s got a drug problem and hasn’t gotten treatment in lockup. Caitlin brushes off her concerns, even though she’s already seen what drugs can to a family (her mom has also struggled with addiction). 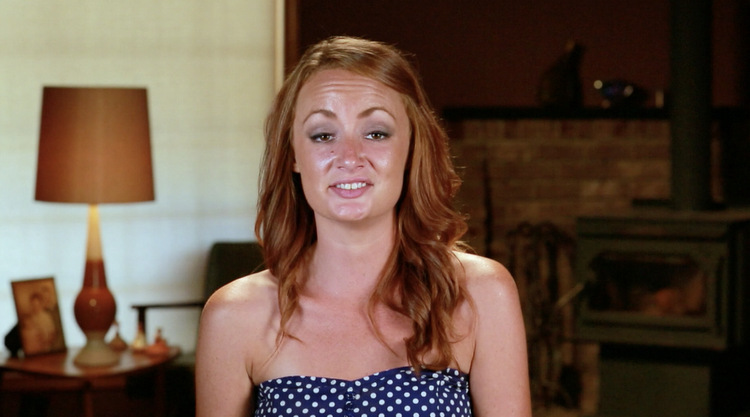 When they call Matt later, Caitlin yells, “Surprise! I’m with your mom!” Matt promptly sh*ts his shorts. He’s like WHAT THE F**K?!? Uh oh, this plan is no bueno. In fact, he’s so pissed, he refuses to call Caitlin later for their goodnight routine. She begs him to call over and over, showing us (already!) how insecure and desperate she is. UGH. Looks like this will be a total catastrophe.

The only bright spot? Matt is listed in Caitlin’s phone under the name “Everything.” Number one: Thank you to the shady ass camera crew for zooming in on that gem. Number two: I plan on exclusively referring to Matt as “Everything” from this day forth. As in, Caitlin plans to pick up Everything the next day, even if he ditches their nightly phone call…because Caitlin is the doormat that Everything plans to walk all over. 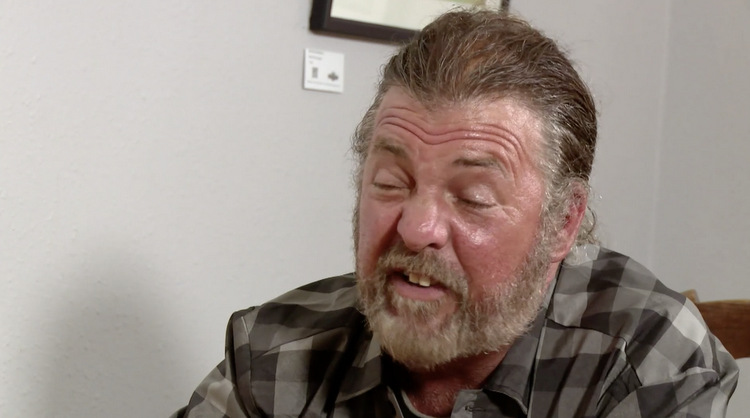 Welcome back, Scott! Wait – did poor Scott lose yet another tooth since last we laid eyes on him? Oh GAWD, this guy breaks my heart. Here he is, moving all the way to Wisconsin from California to be with his long lost prison boo, Lizzie. She wasn’t released from prison last year due to drug use and contraband violations (harboring a cell phone…that she used to snap some very special prison selfies in her underoos). Her lawyer got the extended term of incarceration down to a year though. Scott is excited for her release. 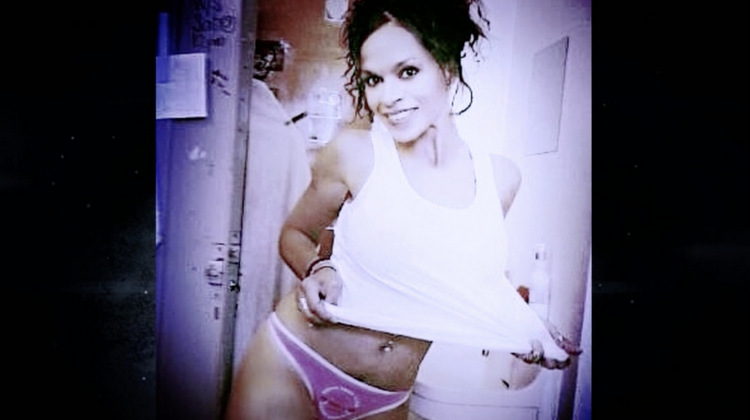 He’s so excited, in fact, that he’s hired poor man’s Julian Lennon to show him some houses. The house he visits looks great – 3 bedrooms, spacious living area, nice lawn. But when Scott calls Lizzie to tell her about it, she reminds us why we side-eyed her hardcore last year: SHE IS A GRIFTER. Period. She’s like, “You know I need to make the decision on the house, Scott!” Also, she has no plans of sleeping with Scott, as she’s now a “Godly, sober woman” who doesn’t turn tricks for a buck. Mmm hmm. Sure, Liz.

The look on Scott’s face when he hears this news is much like my dog’s expression when I hand him a nice, healthy, probiotic as a “treat.” It’s not what he was expecting for good behavior. It’s not what the realtor was expecting either, and the about-face he does when Lizzie starts talking to Scott about sexytimes is pretty much my favorite moment of reality TV, circa 2018. He’s OUTTA there. Meanwhile, Lizzie shakes Scott off by barking, “So, you just go find a 4-bedroom house with a swimming pool and we’ll be okay. Okay? BYEEEEEE.”

RELATED: Love After Lockup Update From Mary And Dominic- Dom’s LaunchedHis Own Business And Gets Out Of Halfway House In March!

We learn that Lizzie has a 19-year old daughter, Jazmyne, who Lizzie hopes to reconnect with upon release. In a heartbreaking confession, Jazmyne explains how her mother has been out of her life since she was 8 years old and, sadly, how she blames herself for her mom’s drug addiction because Lizzie just “wasn’t ready for a child.” Okay, you guys – Jazmyne is officially now on our list of people who must be saved/protected at all costs!!!!! I can’t handle this. 🙁 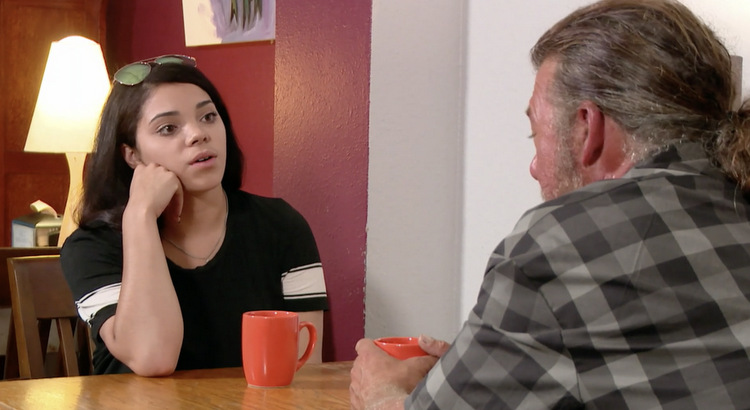 At a coffee shop later, Scott meets up with Jazmyne and admits he’s spent $90K on Lizzie over the years, most of it going to drugs – which he FULLY KNEW ABOUT. Um…what the actual hell, Scott?!? She can’t believe he’d fund her mom’s drug habit. He kept her both dependent on him and the drugs, and locked up even longer, just to call her his “girlfriend.” Jazmyne resolves to do whatever is necessary to get Scott out of her mom’s life after she’s released. If Lizzie is truly sober this time, that is. 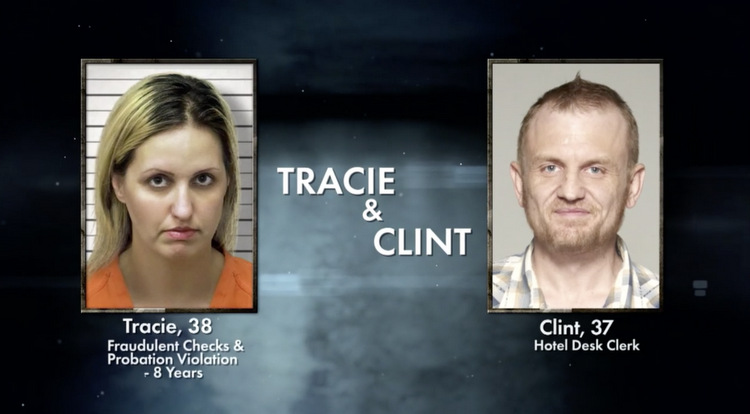 Well, I’m just gonna say it right now: WEtv has struck gold with this casting choice. I think we’re looking at the breakout star of LAL, season two. Meet Clint: A hotel desk clerk with super crazy eyes and an affinity for saying “I’m fixing to…” before any and all declarations of intent. “I’m an only child because my parents stopped at perfection, and I would definitely say I’m a catch,” says Clint. Uh…this dude seems a little “touched,” as my sweet grandmother would say, yet somehow found the wherewithal to find love online. Sure, it was on a prison dating website – but still! It’s an actual human who’s interested in him. #NoSmallFeat 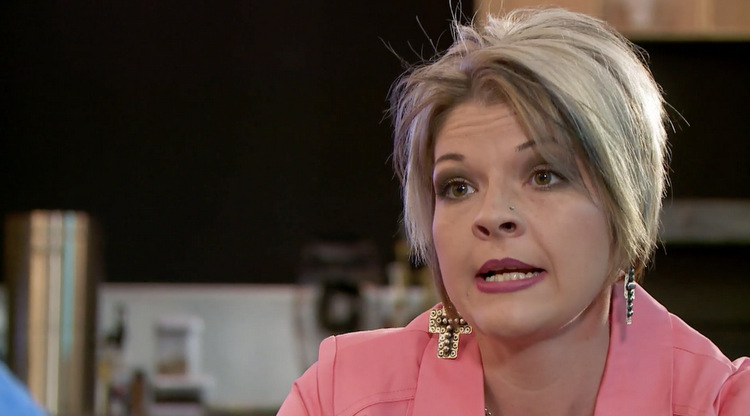 Clint also has two ex-wives, one of which is now likely changing her name and address after appearing in this scene with him on national TV. Her name is Haily, and Kate Gosselin wants her hairstyle back. She comes to see Clint at work, where he tells her about his big plans to marry Tracie, who will be released from prison soon after serving 8 years for fraudulent checks and parole violation.

Haily – who’s also Clint’s boss at work – sits there in her bedazzled cross earrings and slow-blinks at the sh*tshow before her. Clint says he’s marrying Tracie in just a few days, that she’s an inmate who’s being released soon, and that he’s LITERALLY NEVER MET HER. Yup, they are pen pals, in the strictest sense of the term.

“It’s…not normal,” Haily tells the cameras. I think we can all agree on that. Then again, this chick married Clint at one point in her misguided life. Is she really the voice of reason? “We do have goals, but not just probably the ones we should have,” mumbles Clint, who gushes about Tracie being “so gorgeous” and feeling like he rescued her. “I hope it don’t turn bad,” says Haily, who obviously does not understand how this show works. 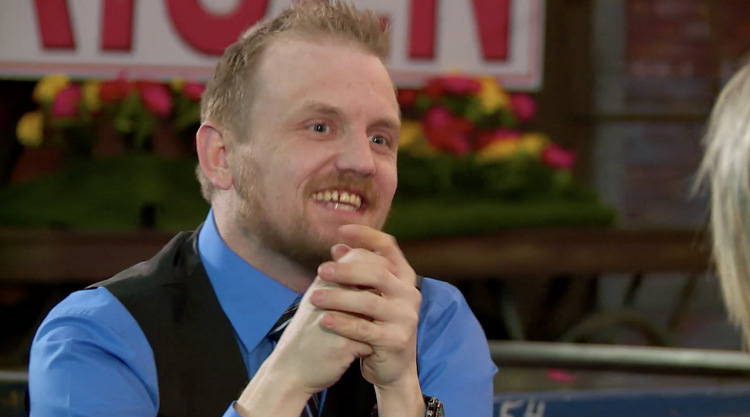 Clint’s parents, Alice and Kendall, are not on board with their son’s plan/no-plan either. At the meat store they own, Clint visits them and tells them about his plans to go pick up Tracie later that week and ride off into the sunset together.

Alice wants Clint to slow his roll on this f**ked up relationship. Kendall just rolls his eyes. “I’ve seen too many Dr. Phils, ya know?” He knows Clint is headed for disaster, but there’s nothing he can do about it. Clint says he doesn’t care if Tracie is a “masked serial murderer” (huh?), he’d still marry her! And he’s fixin’ to get him a fancy new big boy suit to do it in. 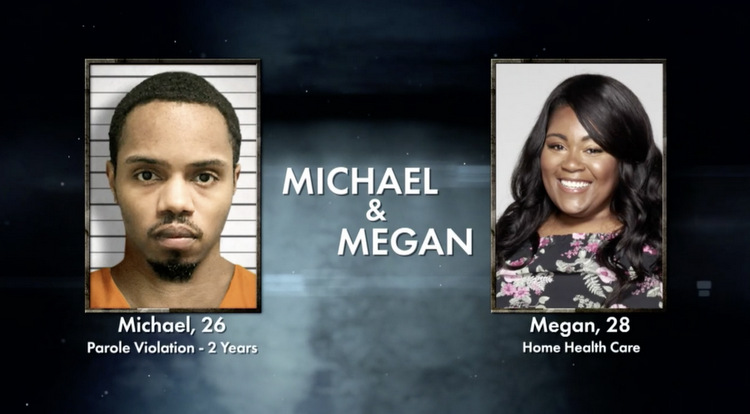 Last up, we have Megan, the 28-year old virgin, who fell in love with Michael, currently incarcerated for a parole violation after a previous charge and time served for grand theft auto. Michael’s spent most of his life in the system. Megan is a home health provider who doesn’t seem to know a whole lot about the world. In fact, she’s hired a literal coach to “teach” her about sex. Yes. This is actually happening, people. ON VIDEO CHAT. 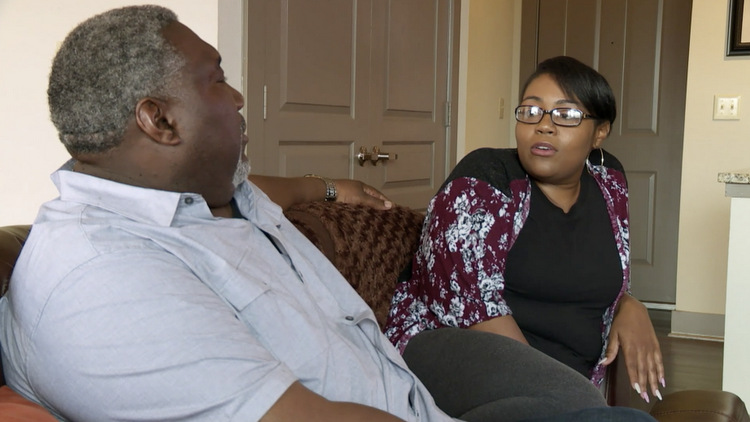 When Megan’s father gets wind of his daughter’s plans to marry Michael, he’s stunned. “We didn’t raise you for all that ruckus!” he chides. PREACH, Papa Megan! But Megan is sure that Michael – who she’s literally never met in person – is the “one.”

Cut to Sarah, Michael’s ex who tells cameras that she can’t wait for him to get out because they’re still engaged and she wants to marry him! She gushes about how great it will be once their family is reunited. So, let’s get this straight – Sarah and Megan are both in a relationship with this dude unbeknownst to each other, and he’s managing multiple proposals and engagements FROM PRISON? Well played, WEtv. Slow clap and two snaps in a circle to you.

Two more couples we still have to meet are Angela & Tony and Marcelino & Brittany, who should appear on next week’s installment of THE GREATEST SHOW EVER CREATED. Join us! You know you want to watch more Love After Lockup. (We won’t tell.)