This! This is the episode I’ve been waiting to see on The Real Housewives of Salt Lake City. After weeks of personal storylines and lots of behind-the-back gossiping, the drama finally erupted in the 801. And it was all thanks to Whitney Rose. The youngest Housewife of the bunch certainly earned her snowflake this week, putting everything on the table and getting multiple storylines moving. She truly did the Lord’s work. But I’m getting ahead of myself. Let’s start at the beginning, shall we?

Jen Shah is throwing a party! More specifically, it’s a surprise birthday party for her husband, Sharrieff Shah, who hates surprises. On the contrary, Jen seems to really love surprises, doesn’t she? Or at least birthday parties, considering this is the second one she’s thrown this season. I wonder if her plans for Coach Shah will match the tens of thousands of dollars she spent on the premiere soiree for Meredith Marks. Considering she’s throwing this Shah-mazing party at a TopGolf, I’d say probably not?

Naturally, the one person Jen‘s not inviting this time around is Mary Cosby. Given that Mary’s practically been written out of the last two episodes, this is hardly surprising. But we do see more of her this week, thanks to the wonders of technology. (Because she barely filmed, the preacher was apparently left with nothing to do but sit around her house FaceTiming people while she ordered her poor housekeeper/cousin around.) Mary’s feelings are hurt at being left out. Like, so much so that she’s getting teary over it. Which doesn’t make a ton of sense considering she doesn’t even like Jen. If she were more calculating, I’d say she was emotional over being left out of filming, but I don’t think it’s that either. Mary remains an unpredictable enigma. 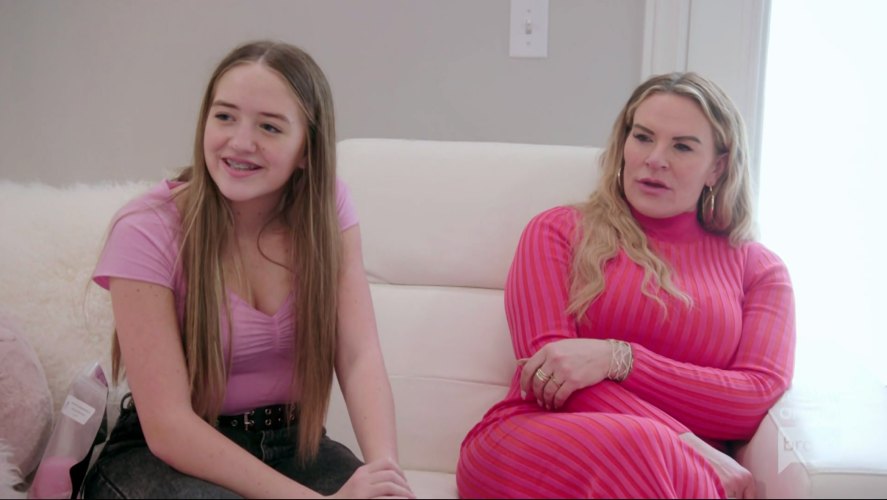 Meanwhile, it’s Valentine’s Day over at Heather Gay‘s house. And we finally meet her ex-husband, who pops over to surprise his daughters with teddy bears and chocolates. Personally, I’m still a bit confused over Billy Gay III‘s involvement in this show. Wasn’t his face blurred out of their wedding photos in the premiere? Didn’t Heather say on Watch What Happens Live that he wanted no part of it? So why would he suddenly agree to sign a release and appear on camera? Heather also shares that the reason Billy left her involved drama over accommodating his sister for their daughter’s baptism. Which is the most hilarious Mormon family drama I’ve heard yet on this show.

Also, little cultural side note: the conversation about double piercings and tattoos isn’t a joke. There’s a huge stigma against them in the Mormon Church. Back in 2000, then-prophet Gordon B. Hinckley gave a commandment from the pulpit that female members could have just a single pair of earrings. Males were forbidden from any piercings at all. Tattoos are a no-no for everyone. The Church loves to dictate the way its members look. And don’t even get me started on the asinine dress and grooming rules at BYU…Honor Code, what? 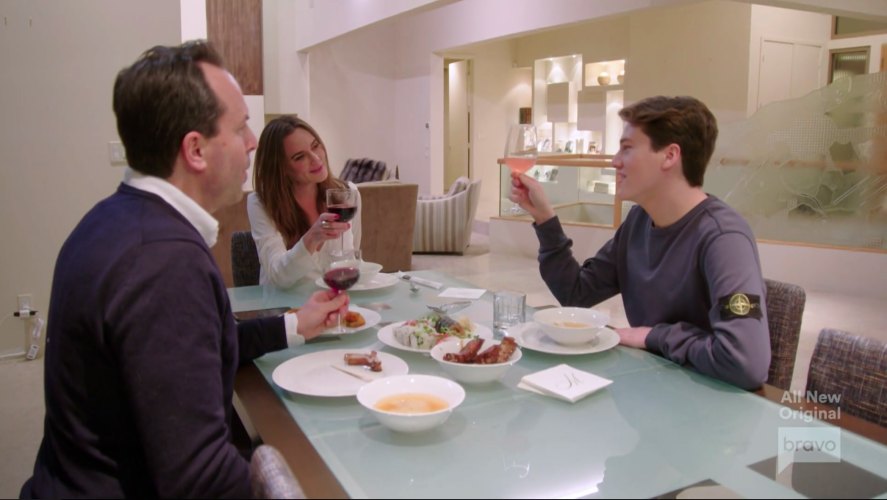 The Markses are back together! Like head over heels in love, mushy gushy PDA-level together. Over a sushi dinner, Meredith and Seth Marks make all kinds of non-stop flirtations at each other. In her confessional, Meredith claims that in the past, she and Seth have always made their marriage work for the kids. But now the kids are grown. So this time, rekindling their romance is all about them. And she doesn’t care who knows it. Brooks Marks, however, is not having it. Sure, he wanted his parents back together, but not this together.

Later, Whitney pays a visit to Mary‘s house of high-end hoarding. Apparently, Mary owns so many homes that she’s lost track. There’s also restaurants, a mortgage company, a daycare, and who knows what else in the empire left to her by her grandma. (Not to mention the grandpa-husband, which…too soon for jokes about that, Mary.) All I know is it sounds like quite a lot for the church’s tithes to be paying for… 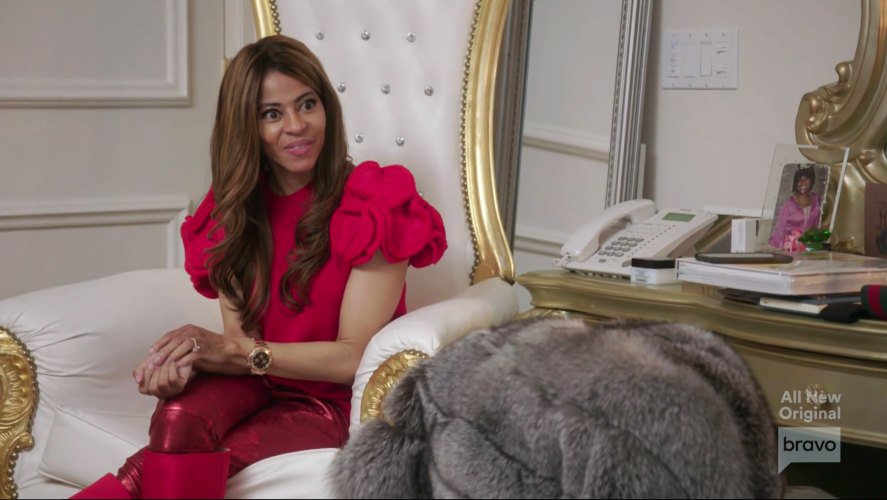 Now that Mary‘s managed to get another Housewife to film with her, she goes for the jugular. Not wasting any time, she cuts right to the chase and asks Whitney what’s going on with Jen. She doesn’t think it’s fair that she’s getting iced out and all the other ‘Wives are just letting it happen. Everyone’s scared of Jen and no one’s sticking up for Mary! Then she plants a seed, claiming Meredith and Lisa Barlow are both talking about Jen behind her back. Whitney’s shocked at this bit of piping hot gossip, and decides later that the only course of action is to tell Jen out of loyalty. Because that’s bound to go well!

The night of Sharrieff‘s surprise party arrives, and all the ‘Wives bust out their best ’90s-inspired hip-hop looks. Whitney‘s in pigtails and a neon track suit. Lisa‘s paired an oversized Balenciaga shirt with a high half-pony and fanny pack. Meredith clearly doesn’t know what hip-hop is. And Jen arrives decked out in a full recreation of Beyoncé’s iconic look from the 2016 Super Bowl halftime show. Coach Shah is blown away. Dance battles ensue. The most hilarious line of the night goes to Lisa for, “Whitney heard it was a 1990s hip-hop party and got super excited to show off her choreographed dance from middle school.” I died. 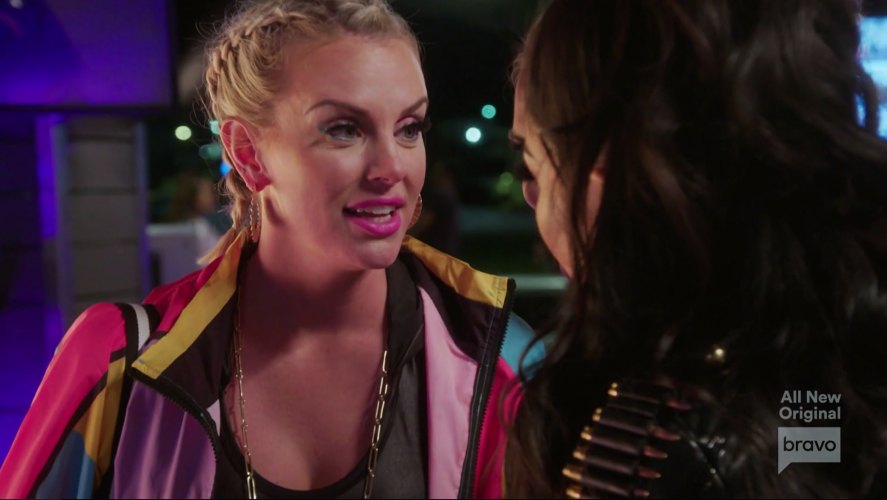 It’s all fun and break dancing until Whitney gets a little too much liquid courage and decides it’s the perfect time to spill the beans to Jen that Lisa and Meredith are telling Mary they’re scared of her. Gathering Heather for back-up, she pulls Jen away from the party to speak with her privately. Except she’s a little too tipsy and can barely get the words out. Seriously, she has to stop and start over more than once, until Heather just takes over and blurts out the secret. To say Jen is furious is an understatement. Seeing the commotion, Lisa and Meredith join the fray, where they quickly and vociferously deny Mary’s allegation. Lisa isn’t scared of anyone and isn’t afraid to tell them that.

As Lisa drags a fuming Jen away to defend herself, Whitney decides she might as well put one more secret out in the open, revealing to Meredith that everyone (read: Jen) is gossiping about her marriage. In classic Meredith fashion, she refuses to take the bait, once again snidely “disengaging” from the conversation and storming off in a huff. Now, I love Meredith, but she has to learn to lean into the argument, not constantly run away from it. You can’t just disengage every time drama erupts. That’s not how this is supposed to work, honey. However, she does manage to point the finger back at Jen, threatening that those in glass houses shouldn’t throw stones when it comes to marital issues. 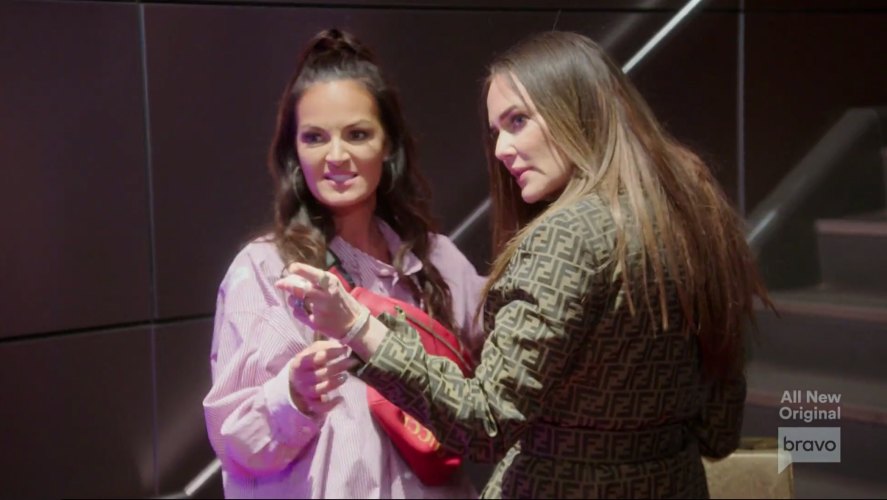 Thanks to Whitney‘s match, the fuse to Jen‘s dynamite temper has been lit and there’s no going back. When Whitney admits all this gossip is coming from Mary, Jen explodes at the mention of her nemesis, chucking her glass across the party and shattering it in anger. From there, she storms out of the party as the other attendees look on in horror, punching walls, popping balloons and fully embarrassing her husband in the process. Meanwhile, Lisa and Meredith are both livid at Whitney. She may be the MVP of this week’s episode, but Whitney should watch her back. Because if there’s anything we know for sure, there’s no wrath like a Housewife scorned.

TELL US – SHOULD JEN HAVE INVITED MARY TO COACH SHAH’S PARTY? DO YOU BELIEVE LISA AND MEREDITH WERE TALKING ABOUT JEN BEHIND HER BACK? ARE THE OTHER REAL HOUSEWIVES OF SALT LAKE CITY SCARED OF JEN? SHOULD THEY BE?

Heather Gay Is “Seeing It Through The End” With Jen Shah; Whitney Rose And Lisa Barlow Shade Jen For Her Behavior At BravoCon And On Social Media

The future of Real Housewives of Salt Lake City has never been more uncertain. Jen Shah has been sentenced to…
Reality News 3 days ago

We are finally at the end of Real Housewives of Salt Lake City’s third season. Boy was it a journey.…
Reality News 6 days ago