Temptation Island has been anything but boring this season. Every week there is a major bombshell, and this week’s episode proved no exception by dropping several more. The mean guy gang was kicked off the island, Blake Eyres is no longer “Blake the fake,” and Kendal Kirkland kicked it up a notch in his quest to sabotage his relationship with Erica Washington. He can’t just sleep with one person on the island, but now two…at the same time!

Kendal was teeing up his excuse slash future gaslighting of Erica on the way to bonfire when he mentioned repeatedly that he and Erica didn’t have any rules so he can do whatever he wanted. No doubt this “no rules” clause will be what Kendal uses against Erica to invalidate her feelings at the end of the season. But for now, we are nowhere near the end (luckily for us!), and it’s bonfire time with Mark L. Walberg and the guys.

Corey Sobczyk watched Erin Smith tell Shaquille Urie she liked how he made her laugh and knew when she was hurting. Shaquille shared that his openness will give him a leg up over Corey. Corey agreed and said he doesn’t open up because that would make him look weak. Corey added he felt he was a failure compared to the success his parents have had. Mark rightly told Corey that type of thinking wasn’t helping, but hindering his progress. We need a podcast with Mark solving everyone’s problems ASAP! That man is good.

Kendal saw a clip of Jesse Stephanos mention that Kendal was crazy for telling Erica she gave one hundred percent in their relationship and he only gave back sixty. Kendal agreed with Mark’s assessment that Erica was trying to be someone she’s not in order to please him. Kendal then told Mark he was open to finding true love on the island with someone else. Insert eye roll here. Julian Allen was annoyed that Kristen Ramos said her dad would be mad once he saw Julian’s behavior on the show. Julian told Mark he’s been respectful during his time on the island. Although that is true, Julian has also said many times that he would be fine if Kristen decided to leave him. What’s it going to be Julian, are you in, or are you out?

Thomas Gipson watched Tom Triola kiss Chelsea Orcutt on the cheek during a confessional. Just like what Sophia Perez did with him during the clip Chelsea watched! Thomas said all the guys over at the girls villa are putting them down, aka “dirty macking,” and he was surprised Chelsea didn’t see it. He added that if Chelsea doesn’t want a flirty guy at the end of the day, they probably won’t work out. As they left bonfire, Julian and Kendal told Thomas that Chelsea was a hypocrite for accusing him of flirtatious behavior, but then flirting with Tom. They are missing the key difference, they are on Temptation Island and not at home.

When the girls got back from bonfire, Erica pretended she was just fine after watching Kendal cheat on her. The reality was Erica was suppressing her emotions, which was probably what she’s been doing in her entire relationship with Kendal. But for now, all the ladies decided not to wallow in their feelings and instead go and party with the guys. 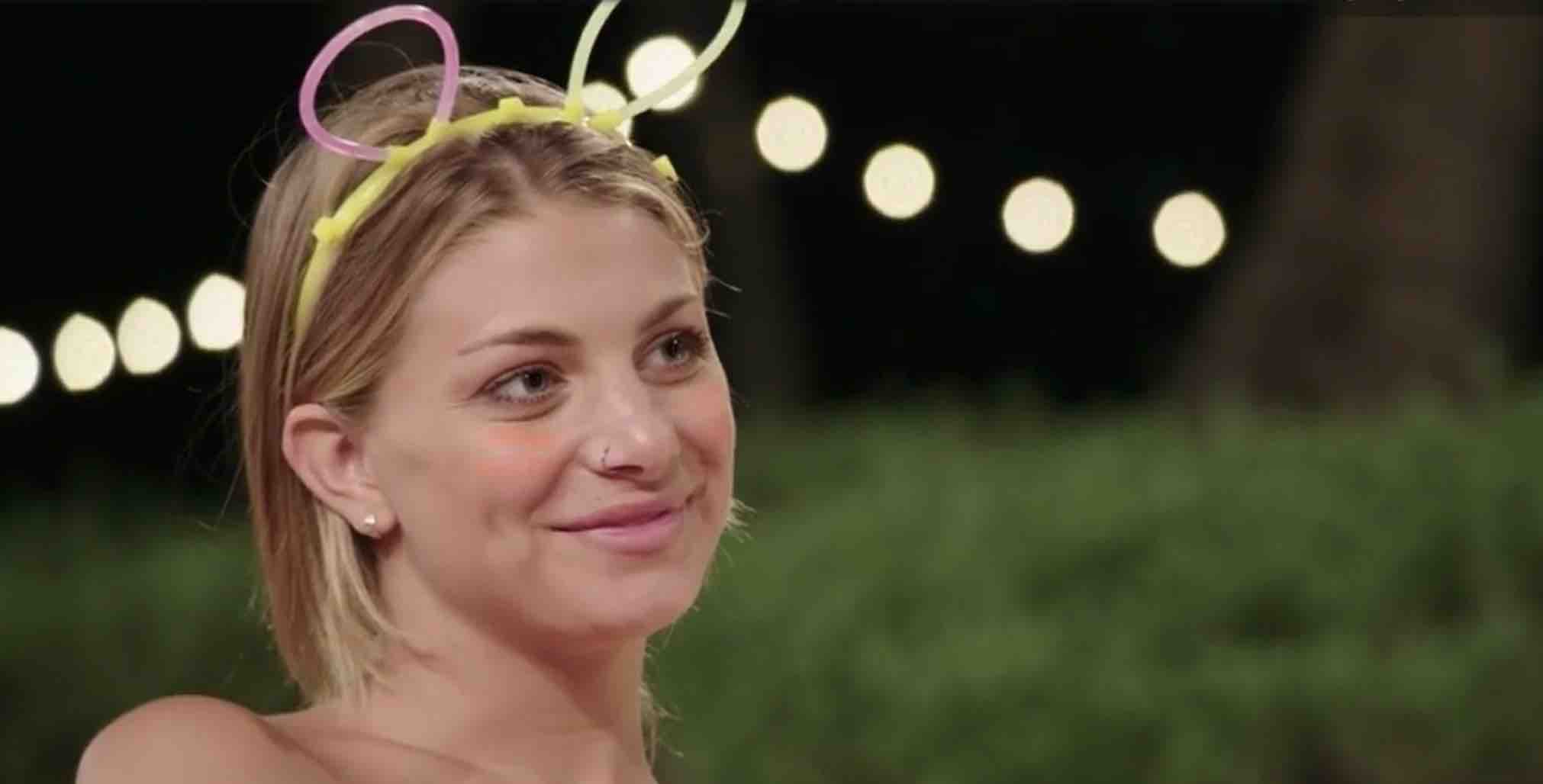 Chelsea pulled Erin aside and said she really liked Tom, but didn’t want to ruin her relationship with Thomas if she does something with him. Erin bluntly told Chelsea to go for it, but Chelsea was unconvinced. Later, As Chelsea danced with one of the guys in front of Tom, Tom told Erica that she was his number one pick and not Chelsea. Boy, Chelsea sure can pick em’! She gets to choose between Blake the fake and Tommy two face. Erica wasn’t fooled though, and said that Tom wasn’t genuine at all.

Kristen confided in Griffin Libhart that even if Julian passed this test, she still wouldn’t trust him. I think that’s a sure sign to move on, no? This reality also might have been what prompted Julian to have a meltdown the following morning. Julian confided in the guys that he’s been acting a certain way to please Kristen and that’s not good for either of them. Kristen and Julian seemed to have the strongest bond at the beginning, but now the cracks are starting to show.

Kendal teased Alexcys Homan that she might not be going back to Los Angeles, but back to his city instead. Alexcys admitted that she’s never opened up and had feelings for someone so soon. What magical power does Kendal have because I just don’t see it. Also, if Alexcys took two seconds think about how he’s treated Erica, what would make her believe he won’t treat her the same way?

Meanwhile, Erica couldn’t hold herself together any longer. She broke down in front of Kristen and shared how she felt humiliated. Erica said she didn’t understand how someone was capable of hurting someone like this. She added that Kendal’s behavior was unjustifiable and she didn’t know how he was going to excuse it. Well, it’s all quite simple. Kendal is a sociopath who will justify his behavior by, “no rules.”

That evening Mark spiced things up by announcing they are having their first elimination! Corey, being the nice guy he is, said they should only eliminate the girls they didn’t have a connection with. Kendal, being the sociopath that he is, bragged he fired people all the time so this was easy for him because he lacked emotion. Regardless of their reasons, or lack thereof, they decided to kick off Isabel Thanimithak, Katrina Koomen, and Lauryn Stewart. The ladies took it well, and walked off without making a big deal about it. 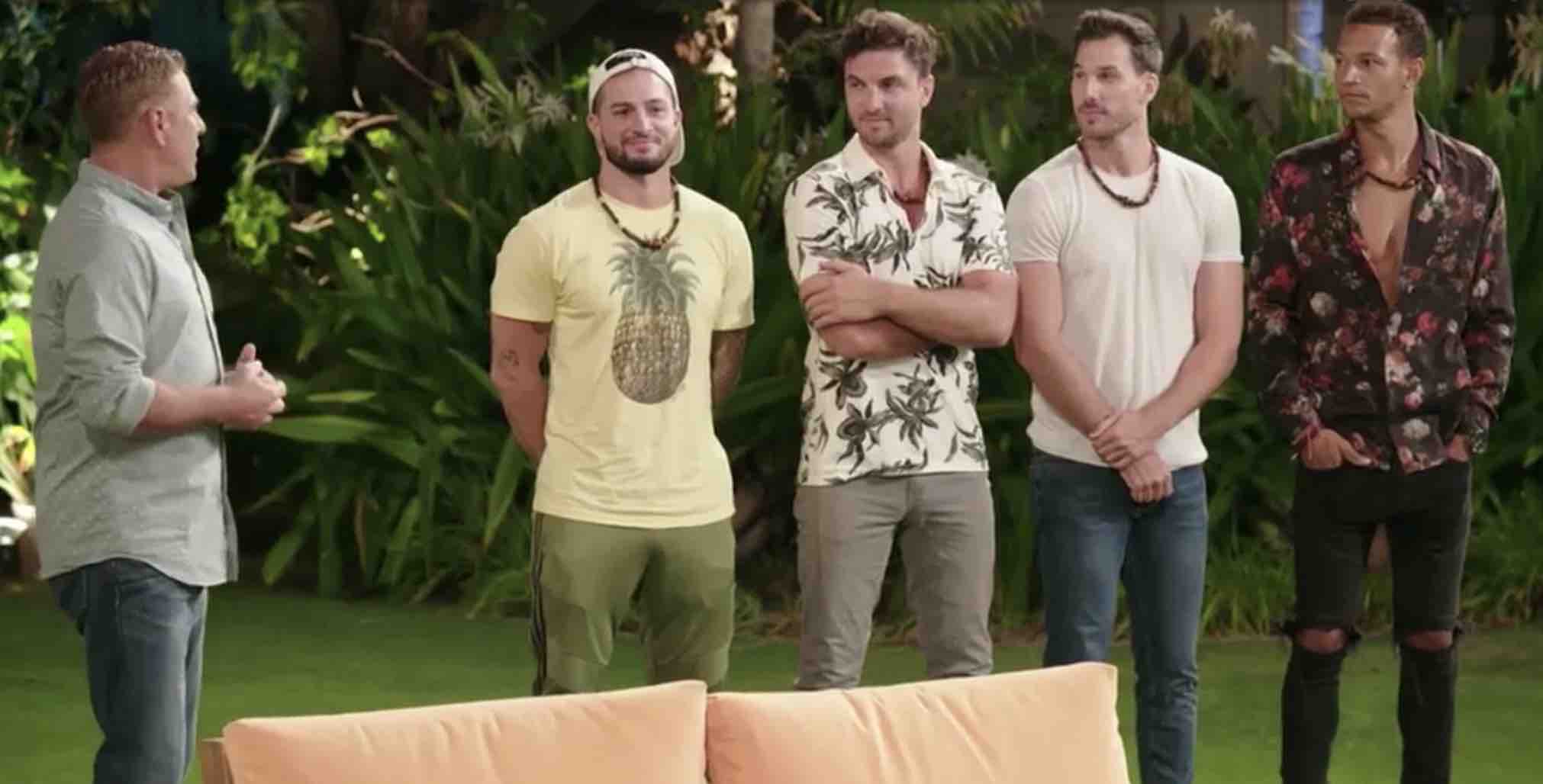 However, it was a completely different reaction on the other side of the island. The ladies decided to eliminate those who were causing drama in the house. And those drama queens were Tom, Evan Mcfadden, Rocky Buttery, and Trent Jespersen. On their way out, each of the four felt the need to get a dig in at the women. They said they didn’t want anything serious anyway, they couldn’t remember their names, and then they starting giving relationship advice. Luckily Mark jumped in and stopped them before they could go any further. Good riddance.

Later, Chelsea was suddenly team Blake again. Chelsea claimed she pushed Blake away because she had feelings for him, but now wanted to let him in. There was no explanation given as to why Chelsea was over Blake being fake. I really hope they give a reason during a future episode because I am thoroughly confused. Erin also reconciled with Shaquille, and admitted she pushed people away when she cared about them. Shaquille continued to be over the top and gave a speech about how much he adored her. There’s a difference between being open and talking BS. Shaquille could be going either way at this point.

At the guys villa, Kendal decided to give a pep talk to all the ladies that they needed to turn it up. Kendal really is king of the castle in his own mind. But the ladies listened and things got crazy when Nickole Ciszak and Alexcys skinny dipped and started making out in front of everyone.  To top it off, Alexcys asked Nickole if she wanted to spend the night with her and Kendal. I guess Nickole is officially over Corey because she agreed. And Kendal provided yet another bonfire clip to humiliate Erica with. Hope it was worth it.

The next morning all the girls freaked out when they found out Nickole and Alexcys hooked up with Kendal. Alexcys confessed what happened last night was out of her comfort zone, but it was nice to try something new. Alexcys is trying real hard to impress Kendal, isn’t she? But her plans are backfiring because all Kendal thought about was how he should take Nickole out on a date next.

At bonfire, Chelsea went first and watched as Julian told Thomas she was a hypocrite for flirting. Chelsea wondered what Thomas could be upset about because the worst she did was dance. Erin saw a clip of Nickole and Maddy Brown discuss their theory that Erin was only on the show to get rid of Corey. Erin was upset that she had given off that impression, and said she felt differently about Corey now than when she first came to the island. Mark reminded her that at the end of this, Corey could still have the same traits that bothered her, which was why she brought him to the island in the first place.

Next up was Erica, and I think we all know what she saw. Of course, it was a clip of Kendal hooking up with Nickole and Alexcys. Erica observed it was the new norm to watch Kendal have sex with someone every week. Mark asked if there was anything Kendal could do to win her back, and Erica said absolutely not. Let’s hope she sticks to her word and doesn’t pull a Kate Griffith and David Benavidez scenario from last season.

Kristen watched as Julian sat crying alone in his room. This got her upset because she felt bad she wasn’t there for him. But when Mark asked her again why she was here, Kristen started crying that she knows she needs to work on herself and open up, but it’s too hard for her. For the first time on the show that I’ve ever seen, Mark went and actually sat next to Kristen to comfort her. He then asked her again what had happened. As we know, last week Kristen shared she had a traumatizing event which was why she stayed with Julian even though he cheated on her several times.

However, this time Kristen opened up and told Mark that she had lost her brother due to an overdose. It was truly sad to see her breakdown, but hopefully finally opening up will give Kristen the clarity and peace that she needed in order to move forward…with or without Julian.

TELL US – ARE YOU SURPRISED THAT KENDAL HOOKED UP WITH ALEXCYS AND NICKOLE? DO YOU THINK ALEXCYS WILL BE UPSET IF KENDAL GOES OUT ON A DATE WITH NICKOLE INSTEAD OF HER? WHY DO YOU THINK CHELSEA FORGAVE BLAKE FOR BEING FAKE? DO YOU THINK KRISTEN WILL LEAVE JULIAN NOW THAT SHE SHARED WHAT HAPPENED TO HER BROTHER?