The Fourth of July never ends in the Summer House. At least not at the end of an episode. Because the party is still in full swing at the top of the latest hour. Last we left off, everyone was drunk. Amanda Batula was still giving Kyle Cooke the patriotic cold shoulder. Andrea Denver had been kicked in his beautiful face. And Lindsay Hubbard was sauntering through the chaos kissing anyone she felt like — new housemate Alex Wach included. Ok, all caught up? 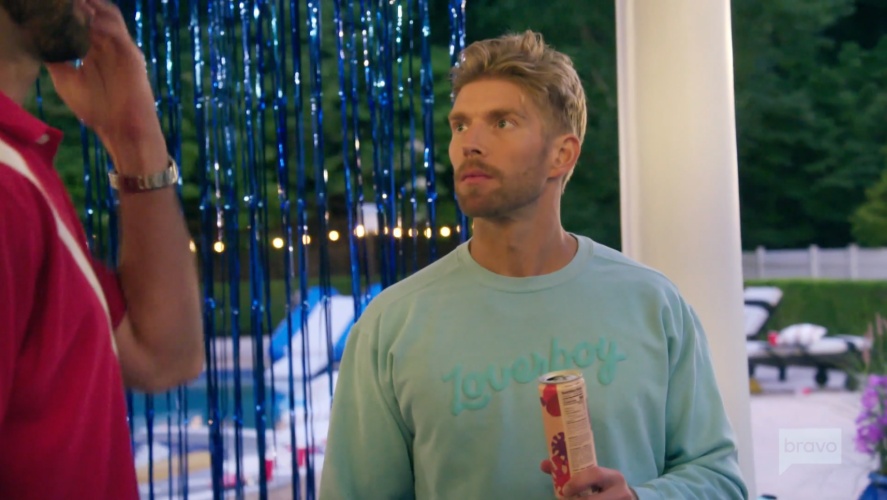 With Paige DeSorbo still tending to a wounded Andrea in his (now very wet) bed, the rest of the gang decides the Fourth of July festivities are over. So while Alex tries his best to fit into Lindsay’s shirt without his gigantic muscles ripping it to shreds, Amanda is busy ushering guests out of the party while offering goodbye shots all around. Democracy’s another year older, now get out! Only after everyone leaves does Carl Radke stop and realize it’s not just America’s birthday, it’s his six-month sobriety mark. Go Carl! 6.0 and six months sober. The entire Bravo fandom is rooting for you.

Kyle, however, hasn’t had much fun at this annual start of summer bash. Mostly on account of Amanda spending the whole party avoiding him and refusing to talk through their screaming match from the first night of the weekend. Danielle Olivera hasn’t either, considering she spent much of the party arguing with boyfriend Robert Sieber over how much time they can or cannot spend together this summer. And after everyone else goes to sleep with the house a post-party disaster, it turns out newbie Mya Allen can’t sleep until after she cleans the kitchen. So I guess that’s one less thing to deal with the next morning when everyone’s hung over.

Speaking of the next morning, it’s a Monday. Which means the Good Vibe tribe must head back to the city. But Amanda‘s not interested in making the four-hour trek to New York in a silent car with her fiancé. So instead of riding with Kyle, she tells him she’s getting brunch with the girls on the way and will drive back to the city with them. If Kyle didn’t know he was in the doghouse yet, he certainly does now. 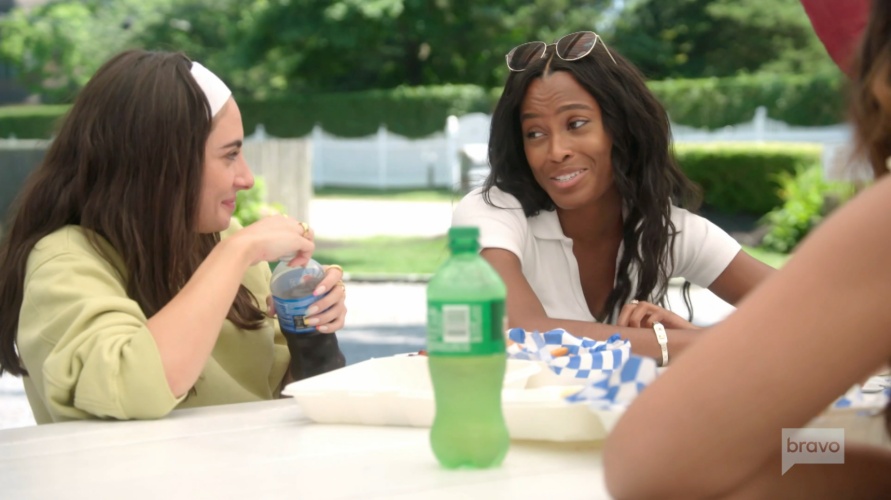 The girls stop at The Hamlet in Hamptons Bay. (Quick side note: judging by Carl‘s morning run, the new house might be in Sag Harbor? The show hasn’t specified…) Over chicken fingers and fish tacos, the ladies of the house commiserate over their respective problems. Paige is caught in the beginnings of a love triangle of her own making. But is juggling Andrea and Craig Conover such a bad spot to be in? Only if you’re Andrea, I suppose, who left the weekend thinking he and Paige are back on track and Craig isn’t much of a threat.

Ciara Miller, meanwhile is weighing the idea of a prospective fling with Carl against her latent feelings for Austen Kroll, who’s supposed to show up in the Hamptons the following weekend. What’s a girl to do? Go back to the Charleston Charmer who spent all winter flirting with her before making it clear he wasn’t interested in a relationship or take a chance on sane, sober and incredibly sexy Carl 6.0? And Amanda clearly has a major problem to fix when she gets back to real life in the city. Though after sleeping on it, she seems to be minimizing just how serious her issues with Kyle are to her friends, which is a definite red flag. 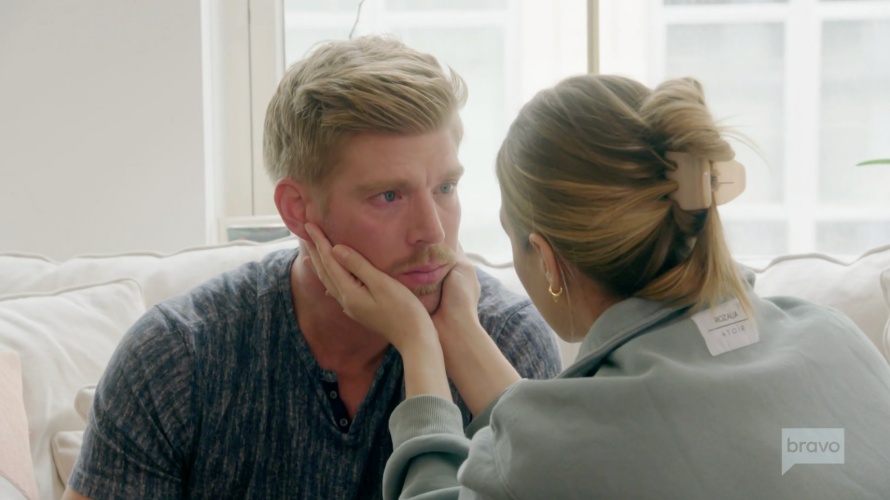 Over the course of the week, Ciara moves into her new apartment. And Paige and Craig go on their first official date in the city. Though we’re robbed of seeing the latter scene in anything other than a flashback, even though it includes the elevator make-out that teased the season at the end of Winter House. Let us experience the excitement of Craig and Paige’s relationship in full, editors! And by Thursday, Amanda’s finally ready to talk things out with Kyle. She’s worried he doesn’t see the toll his drinking is taking on their relationship; he thinks she doesn’t understand the amount of pressure and debut he’s under after taking out a $4.2 million loan to fund the growth of Loverboy. Kyle ends the conversation apologetic and in tears, promising to do better. But with just two months to go before they walk down the aisle, the couple’s relationship is clearly on thin ice.

If only every weekend would arrive as quickly as they do on this show. Because before you know it, it’s Friday and the housemates are once again headed to the Hamptons. On the drive out, Ciara relays disappointing news. Austen‘s not actually coming to the house for weekend number two. (Neither, it seems, is Luke Gulbranson, who’s nowhere to be seen for the third episode in a row. Maybe he’ll join the party next week?) So now, Ciara can focus all her attention on Carl.

Paige, on the other hand, is in for a potentially hazardous weekend of the romantic variety. For the next three days, she’ll be walking a tightrope between Andrea and Craig, on display for the entire house to see. The other wrinkle in this love triangle in-the-making is the fact that Andrea and Craig are genuinely friends. Like, good buddies. They spent the entirety of Winter House bonding, with the Southern Charm-er even inducting the Italian model as real-life American frat boy. (It was cuter in the flashback than it sounds, OK? Also, the scene seems to be one of the many from the missing week of footage from the spinoff that mysteriously never aired…) 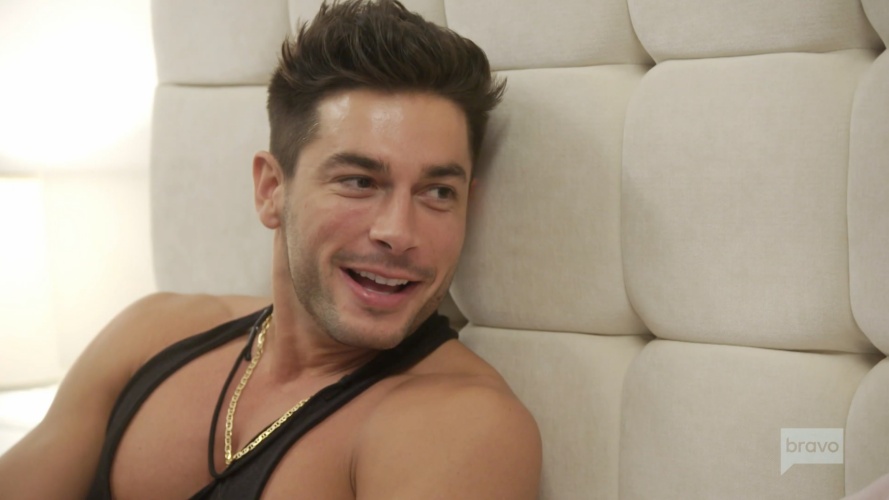 Arriving at the house, the roomies kick things off with a pool day followed by a Mexican dinner. On account of the weather being 100 percent sunnier than the 65 degree rain they started the previous weekend with. Though before they can so much as unpack, Lindsay spills the tea to Carl that she met a guy in the city this week and is apparently going to Mexico with him in a few days time. Uhh, Hot Hubb Summer, I guess? And while a shirtless Alex crushes avocados into some semblance of guacamole, Robert arrives to surprise Danielle for their one-year anniversary. His sweet picnic of sour candy and pepperoni in the pool house seems to successfully make up for all the fighting they did last weekend.

After dinner, Craig makes his grand entrance. And both he and Paige are visibly giddy to see each other. It’s honestly adorable. But before the crew heads to Southampton Social, Andrea pulls his pal aside to clear the air about, you know, both of them liking the same girl. Andrea’s mostly hurt that he found out Craig and Paige were seeing each other through the grapevine. You know, rather than from his friend’s own mouth. And it didn’t help that his calls to talk to Craig about it went unanswered. And although the boys hug it out — they missed each other! — there’s definitely an underlying vibe happening. May the best man win!

And that man, for the time being, appears to be Craig, who spends the entire night out enamored with Paige. Lindsay claims to be surprised at just how much PDA the totally-not-exclusive couple is packing on at Southampton Social. Because last she heard via Instagram gossip, Craig was hooking up with a certain reality TV icon whose last name will be blurred and bleeped out this entire season. (I can’t help but get a kick out of thinking about Kristin Cavallari hitting Bravo with legal papers to keep her name off the show. Honestly…her power.) And once they get back to the house, Lindsay has no problem whatsoever planting the Kristin bug in Paige’s ear. 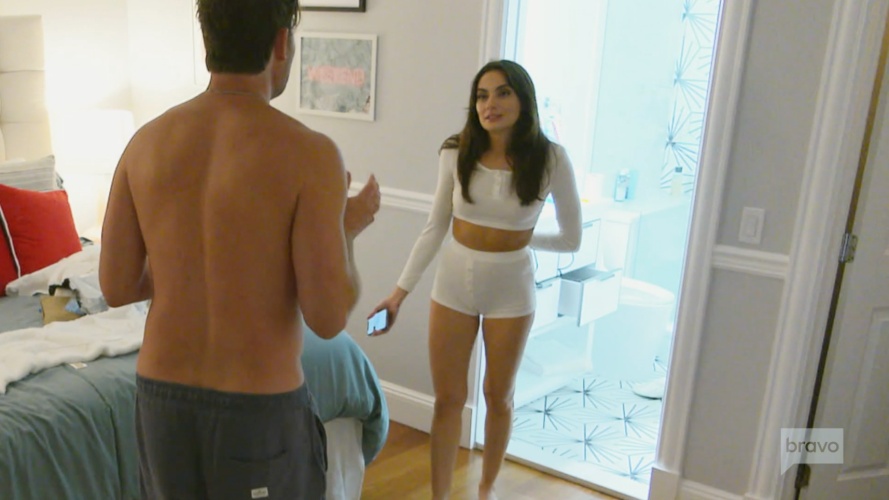 While Carl is out in the hot tub concluding that he’s not ready for his own inter-house love triangle, drama starts brewing inside. Hurricane Hubbard has struck again! However, the audio for the last five minutes of the episode is straight up bizarre. It’s going in and out, everyone sounds weirdly echoey. And I can’t help but wonder if some of the dialogue has been dubbed over in post-production — a classic trick of reality TV that was, ironically, pioneered on both Laguna Beach and The Hills…

Paige had seen the rumors about Kristin circulating on Deux Moi. But Lindsay claims she heard from Austen that very day that Craig‘s been hooking up with the Very Cavallari alum. All this time, Paige had assumed the rumors were actually about Austen. And now suddenly she’s found herself pitted in another love triangle against one of her favorite celebrities of all time. (And one who, mind you, perfected the art of the reality TV love triangle at the age of 16.) Craig tries to confront the situation head on, but calling Paige “weaker than [he] thought” for being manipulated by Lindsay is not the way to go about that, sweet Craigy. Paige feels like she looks like the fool, but Craig thinks Lindsay’s the “loser” for stirring the pot.

He also throws Austen under the bus by claiming Lindsay and his pal have been dating for the past four years while seeing other people. Uh, that wasn’t the story six months ago in Vermont! Mya accuses Craig of gaslighting Paige. But the episode ends with her sneaking into his room for a second, more private confrontation. One that doesn’t involve her friends standing guard or chiming in. And no talk of Austen and Lindsay, please. She just wants to know the truth. Who’s hooking up with Kristin: Craig or Austen? And Craig admits that, yes, he’s made out with her before. (And Austen, apparently, is seething with jealousy over it. Just by the way.) But is he still hooking up with Kristin now? That’s the juicy cliffhanger we’re left on until next week…

TELL US – SHOULD AMANDA HAVE FORGIVEN KYLE SO EASILY? DID CRAIG BREAK BRO CODE BY NOT TELLING ANDREA HE WAS SEEING PAIGE? DO YOU BELIEVE CRAIG REALLY HOOKED UP WITH KRISTIN?

While many of us are in the midst of fighting frigid winter temperatures, it’s almost time for another round of…
Reality News 5 days ago

Kristin Cavallari has come a long way since her days as a high school flirt on Laguna Beach. Since her…
Reality News 1 month ago

Another year of chaos in Vermont has come and gone, and we have another messy season of Winter House to…
Reality News 2 months ago

Relationships in the Summer House universe are not comparable to those in the real world. Jessica Stocker explained it well…
Reality News 2 months ago