Settle in for a heaping bowl of ridiculous served Jenelle Evans style! In several interviews Jenelle reacts to her various twitter feuds with other Teen Mom 2 stars, plus her consecutive custody battles with Barbara Evans and Nathan Griffin. She also brags of the wonders of boyfriend of the month David Eason. Delights aplenty are below.

First up Jenelle on her twitter altercations with Kail Lowry.

“Me and Kail, we’ve been on edge lately and I don’t want to associate with her anymore because it seems like she keeps the argument going,” accuses Jenelle. “I dropped it. She keeps going making snide comments and stuff. I just think it’s really rude of her.”

“I don’t think that she should be putting me down for my medical issues when she has no idea what I’m going through,” Jenelle complains to Perez Hilton.

Jenelle’s advice to Kail: “focus on herself” and spend less time on social media. Those that can’t do, tell others what to do, I suppose.

Still, Jenelle says, “I wish me and Kail were able to [make up].” Just like Jenelle and Chelsea Houska did after Jenelle accused Chelsea of copying her by having a website! They’ve “dropped the situation” and moved on. (More like Chelsea quit engaging).

Custody Issues With Nathan and Babs, Plus Court Drama With Nathan’s Girlfriend Jessica:

Jenelle promises that on season 7 we’ll finally see her “trying my hardest to get Jace back,” while also “pursuing” full custody of Kaiser. “I’m taking it all very seriously,” she assures Wetpaint. Which is why she still has NO JOB. Oh wait — Jenelle is a fitness and nutrition expert now. (HAHAHA!)

“I filed child support against Nathan and he’s been served so that court date will be beginning of April,” Jenelle shares. “I’ve also filed for full custody on Kaiser against Nathan and they still have to serve him those papers.”

Providing more information, Jenelle tells Us Weekly, “I’m trying to file custody papers, but Nathan won’t give me his address. If he’s going to have Kaiser for a weekend, I need to know where he is.”

“He hasn’t asked to see Kaiser since December,” adds Jenelle. “He tweets about me but he won’t text me and ask to see him.… He wants to make me look bad.”

Jenelle denies that she refuses to allow Nathan to see his son. “He can come up here and visit Kaiser whenever he wants, he knows where I live. It has to be supervised. I told him if he wants to take him overnight that’s fine but he needs to have the necessities. He doesn’t have a carseat, highchair, he lives in a one bedroom apartment. He can’t have Kaiser overnight as of now.”

Jenelle says Nathan threatened to file harassment charges against her if she texts him. (Reason No. 204603830958 why you don’t intentionally get pregnant with someone you met on Tinder 2 weeks prior!) Last month Jenelle accused Nathan of stealing the car they once shared with her belongings inside while she was on vacation with David. “I’m over it,” Jenelle says. “But my lawyer said I could press larceny charges on him for the belongings in the car. I did receive the belongings back but not everything, so the larceny charge is still there so that court date will be the beginning of April.”

So that makes two court dates so far in April (one for the custody of Kaiser, two for the car…) but wait – there’s more!

Also in April Jenelle goes to court to defend herself against assault charges brought by Nathan’s girlfriend Jessica from an incident where Jenelle threw a glass at her. “We’re taking that charge to trial and the first court date will be in the end of April, but probably May until the actual jury trial happens,” she reports.

Jenelle, who is STILL unemployed and looking for work in the Medical Assisting field is unconcerned about how a violent charge could affect her employment (and custody) goals. She’s apparently also unconcerned about how much she’s spending on attorney fees! “My lawyer is going to fight really hard and say, ‘Look, [Jessica] should not have been at Jenelle’s house, this is the third altercation they had, the first time the cops had been called,'” explains Jenelle. “Hopefully, the jury will see it out and see that Nathan was trying to aggravate me, like he wanted it to happen.”

Jenelle’s mantra, right after, “Thou Always Date A Loser” is “Always That Loser’s Fault.” Meanwhile Nathan’s mantra is “GTJ: Gym, Tan, Jail,” followed by “Too Drunk To Remember Reproducing”

With the ridiculous amount of time Jenelle is expected to spend in court, her attorney suggested to Jenelle, Nathan and Jessica that everyone agree to drop all charges and be civil for Kaiser. “But his girlfriend’s not budging and doesn’t want to drop anything,” claims Jenelle. “We’ll let the judge decide.”

Moving on – Jenelle’s is finally ready to fight for Jace. Which means she goes back to court – this time with Barbara! That hearing is scheduled for May 3rd. Jenelle is seeking full custody. “I want him full time, not just on weekends,” she insists. Please! Jenelle only wants Jace (and Kaiser) full-time to pretend-play ‘awesome mommy’ in front of new man David.  #TransparentAsPantyHose

Barbara is not supportive. “My mom hasn’t budged at all,” Jenelle laments to Us Weekly. “So I’m just going to have to let the judge decide.”

As for Jenelle’s relationship with Barbara – they’re “on and off.”

“Every day is different,” Jenelle adds. “It really just depends what mood you catch her in. If we get too deep into a conversation we just disagree and both of our days don’t end up good.”

So, who is watching Kasier while Jenelle and David are jetting off to LA and NY to play ‘celebrity’ or on one of their 62,000 vacations? Is it Babs? Oh, yes, it is, Babs!

Her Relationship With David: 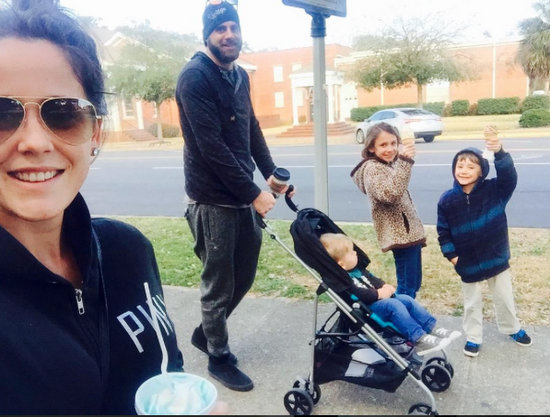 According to Jenelle, David, a welder, is stable, responsible, and not about drama. Oh, and he does not have a criminal record, but they do have a lot in common! Like he was also a teen dad!

So generous and caring he actually pays his own bills! “No matter how much money I make he’s still going to work and pay his own bills. He even gives me money for rent and everything,” Jenelle brags. “Once the season airs they’ll see how good of a guy David is and their opinions will change about him. And Jace likes Dave a lot…” (Jenelle also specifies that Jace never liked Nathan!)

Jenelle and David are living together, but marriage and kids aren’t on the horizon . “We’re holding off on all that because we know it’s important to stay focusing on the kids and to buy a house to move into,” she informs Wetpaint. “And we’re still getting to know each other — it’s only six months in so we’re not worried about that.”

Another thing Jenelle and David have in common: They’re also both in custody battles!

David’s daughter’s mother is “completely nice” and a perfect co-parent, but David is currently taking his son’s mother to court for visitation, then hopefully custody. “That court date is the day of the premiere [March 21], so we have to fly back home to be here in time for court.” How do these people find time to go to the bathroom in between all these court dates?!

Barbara is also finally accepting David. ” I think she’s jealous that we spend a lot of time with family,” complains Jenelle. “I do have my own life now.” Yeah – except Barbara is still raising your son!

“I just want people to see how happy I am and I’ve been happy for so long,” sighs Jenelle.

Proof of Jenelle’s happiness, she’s tweeting to tell us she doesn’t have to tweet about being happy. And also that David compares their relationship to farts. This is true love – Barbara just doesn’t understand!

Let’s just recap super happy Jenelle’s spring schedule 1 court date in March (David’s), 3 in April, and 2 in May. So far… hmmmm… it’s a good thing she doesn’t have a job, because she’d never get that much time off!

TELL US – IS JENELLE READY FOR FULL CUSTODY OF JACE AND KAISER? HAS SHE FINALLY TURNED HER LIFE AROUND?

Wednesday Morning Tea- December 4, 2019: The Stories You Need To See

Monday Morning Tea- December 2, 2019: The Stories You Need To See