Below Deck Mediterranean Recap: She Works Hard For The Money 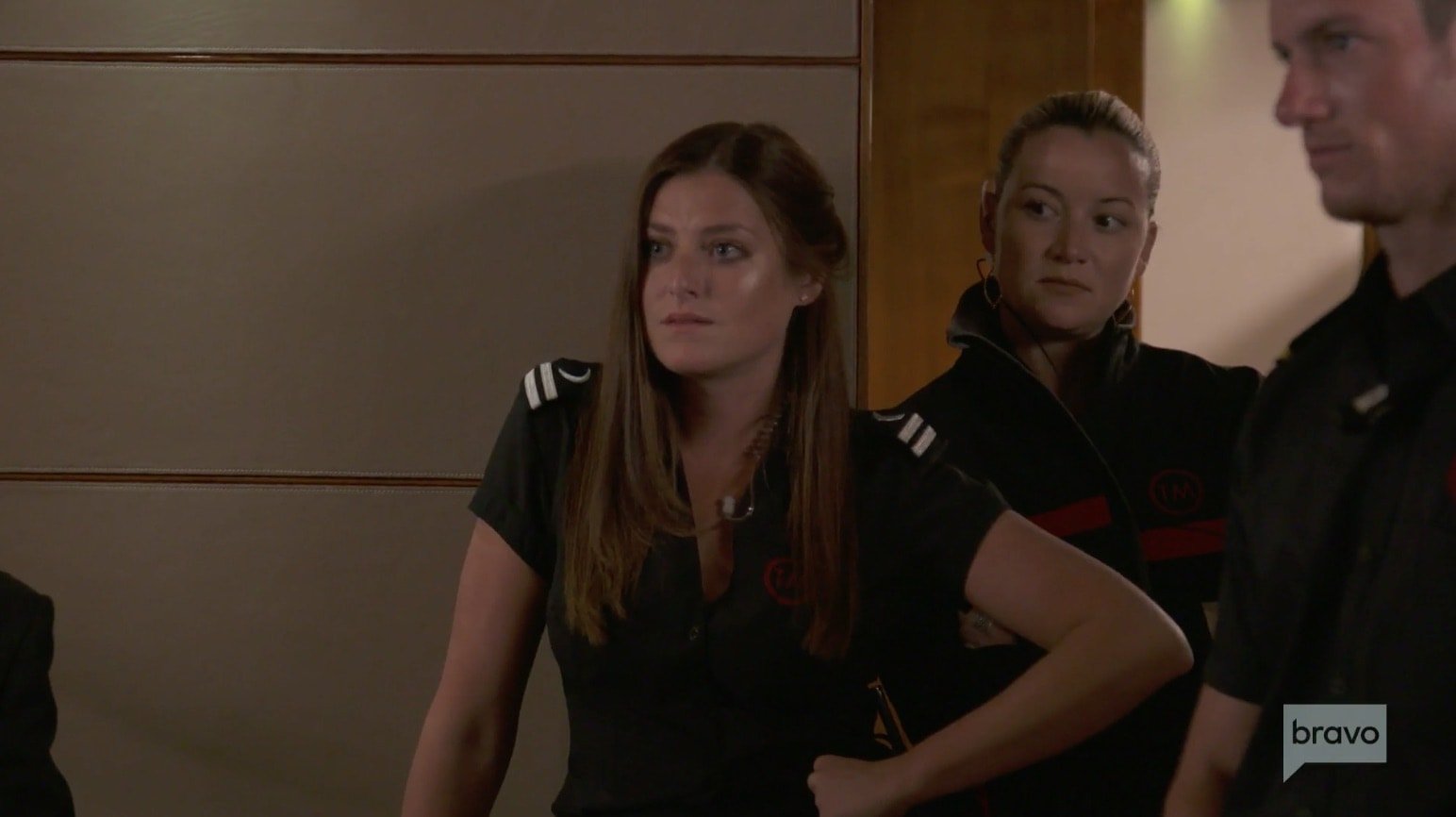 Hannah Ferrier finally learned the definition of work on last night’s Below Deck Mediterranean. Unfortunately, it was all for show. In other news all our happy couples are unhappy!

Whoever declared that you should never go to bed angry, obviously didn’t live and work on a yacht with Hannah. After Brooke Laughton confronts her about all the liberties she takes with her job, leaving Brooke and even Kasey Cohen to pick up her slack, Hannah responds by storming off, leaving Brooke to finish the dinner clearing up.

A bit later when Hannah is skulking around, trying to spy on Brooke and hoping to catch her talking shit to Jaoa Franco (or slacking at her job), she instead finds her being consoled by Conrad Empson! Karma! 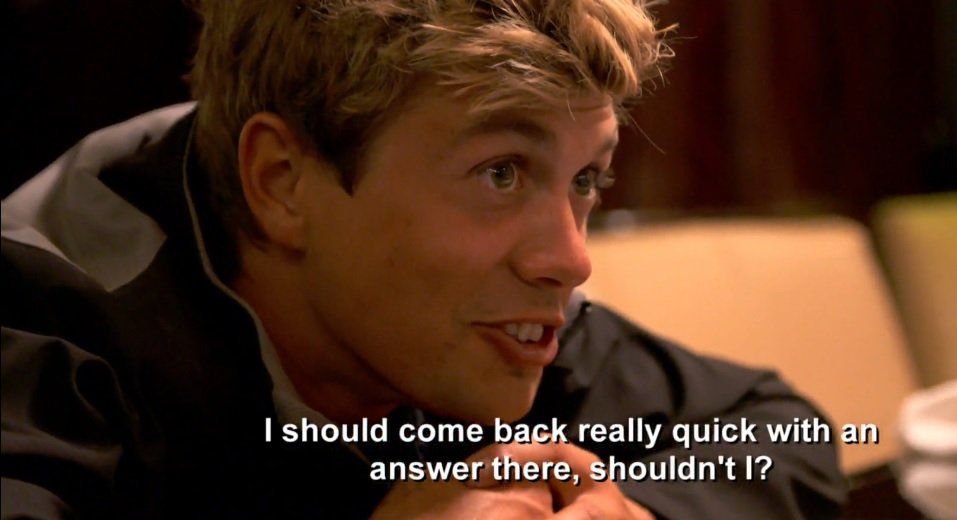 That was the moment Hannah knew she would spend her every remaining moment on Motor Yacht Talisman destroying poor Conrad. As a crying Brooke complains that speaking to Hannah changed nothing, and Conrad simply shrugs – that’s just Hannah being Hannah. His despondency leads Brooke to ask if he regrets “going there” with Madame Stewstress. Clearly, by his non-answer, all signs point to yes on my Magic Hate Ball!

The next morning Brooke is still up bright and early doing laundry, which proves her point – she’s on later; she’s on earlies and Hannah’s just always on gnarly. Brooke tells Joao that their conversation “obviously went down like a shot of nails.” Which is a perfect assessment.

Actually, Hannah blames Brooke’s sudden spine not on getting fed up, but on her relationship with Joao. Clearly, he is using Brooke to destroy Hannah! And cigarettes don’t give you cancer… #sarcasm. (Although considering that this is Joao, harnessing the Voodoo of Him, maybe Hannah is rightly paranoid?)

“She’s one of the most manipulative people I’ve ever met in my entire life,” comments the girl dating Joao. And as if on cue, Captain Sandy Yawn walks into the crew mess just as Hannah started wiping down the staff table year as if to say SEE I DO TOO WORK! Which is the same tactic I used as a little kid when my mom asked me to do chores. Chores I started the moment she walked into the room… After Hannah spends the next two days sucking up to her, being diligent, and even asking Sandy’s advice on Conrad, Sandy smiles that all she ever wanted was to see Hannah caring about her job. Oh Sandy – so naive!

You have to give Hannah credit though. I mean, her uncanny ability to rise to the top like the rancid cream left over after churning butter becoming delicious buttermilk for which to make cake!

After Hannah learns that Kasey, and her suddenly very bright yellow hair, agree with Brooke’s assessment of her work ethic she decides to ignore them until calling a meeting to proclaim that she does invisible work, and to prove it insists that the guests have never, not one time, been unhappy or didn’t have something they want or need. Cue to the hysterical flashbacks of Hannah’s Charter Season Of Oops. Including the time she forgot vodka on this very charter!

Since this is Hannah in Blunerland, she’s also gone from not being able to stay away from Conrad to ignoring him in plain sight. While gleefully conversing with Adam Glick. Luckily while all this nonsense is happening (yes – this was all ONE morning!), the guests are still asleep. Main charter guest Daniel rises around 11 am to read his self-help bible while wearing a tank top that reads, “The Power Of The Dream.” Which looks like a cheerleading outfit for a high school girl on a CW show. My dream is that Hannah goes overboard searching for the mythical Croc of the 7 seas which will drown all her demons in a slow braise of Adam’s melted down Michelin Stars. My dream is also that I never have to receive life advice from someone on a Bravo reality star sporting outdated Justin Bieber hair.

At around noon Daniel and his few alert guests take the tender to a cave while Adam prepares a brunch. “Grateful thankful,” they announce because redundancy brings spiritual purity? Or maybe pina coladas for breakfast while exploring caves in Capri deserves the double-dip?

Ironically Hannah is actually hard at work. And not just in front of Sandy! She’s like the criminal who only expresses remorse after being caught. Except she doesn’t actually feel bad about dumping all her responsibilities on her stews, she just wants to passive-agressively make THEM feel bad for calling her out by gaslighting them into believing they are wrong. Kasey doesn’t care though – she’ll gladly take the extra breaks! It gives her more time to flirt with Joao.

“Part of me feels bad for Brooke, but at the same time I think I still flirt with Joao because deep down I can’t help but think of the guy that Joao could be,” explains Kasey. Which makes no sense because deep down, and on all slick surfaces, Joao is the guy who flirts with his girlfriend’s friends right under her nose and takes pride in this.

What’s shocking is how everyone functions better under Hannah’s wrath. Like there’s a freedom in just knowing where you stand – even if it’s in boiling water up to your ankles. Even Hannah functions better when she has someone in her crosshairs. Even if she’s just being productive to undercut Brooke and Kasey, she’s still actually working. Sandy notices that Conrad is also more on task.

Enough about Hannah though. I’d like to focus on the two most underrated elements of Below Deck Med. Colin Macy-O’Toole, the ferry operator turned short-short adovacte with the voice of an angel, and Jamie Jason, who is one teabag short of extra, which makes her perfectly steeped in sarcasm. In the kitchen, Jamie dry-humps the pantry, and jokingly rasps, “What do you want Colin?” before banging a teabag down on the counter and sauntering around the kitchenette. These two know how to find fun in the absurdity instead of diving into the drama with the clearly mentally unstable people brewing it.

Colin Says Hannah Should Stay Out Of Brooke’s Love Life! 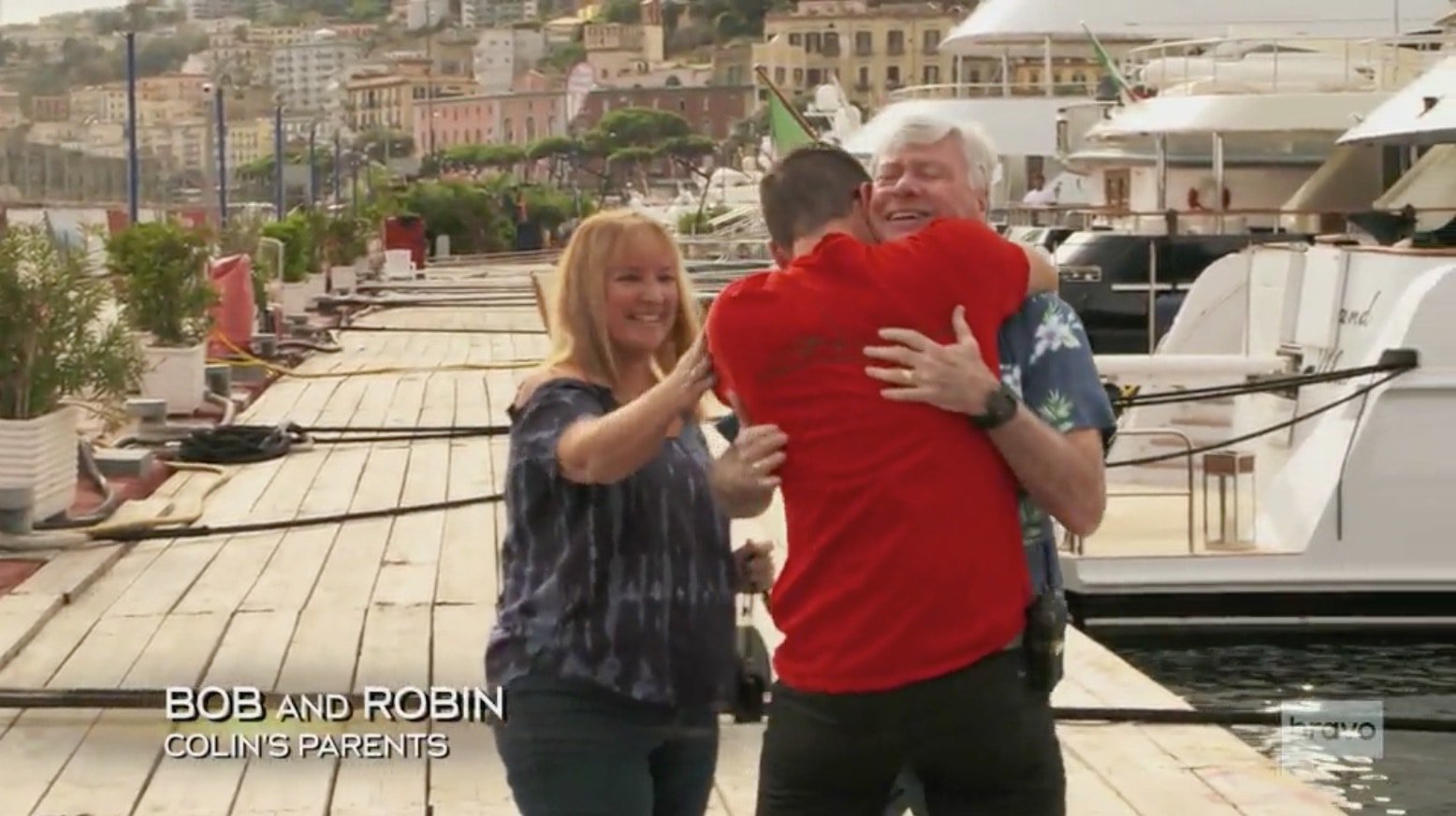 Later Colin’s mom calls Captain Sandy to report that they are actually in Naples and would love to surprise Colin on board. Sandy is more than happy to oblige. When Colin spots his parents walking down the gang plank he literally bursts into tears. C’mon ladies – why is this man and his ferry boat single? Why is this man, who loves his mama and collects shoes and has the best self deprecating humor to go with his half-pompadour single, while Joao has two women fighting to be mistreated by him? The ways of the world are not fair, but at least the right man got attacked by a hippo.

I also love how Jamie is always snacking. Maybe that’s because Adam has been starving the crew by feeding them dinner at midnight.

By the time dinner service rolls around Hannah has relaxed her wrath and is back to fucking up. “If I hear one more positive affirmation I’m gonna shoot myself in the head,” she snarls, before confusing the plates and forgetting which entree is for the dairy-free guest. Even though Adam told her several times. 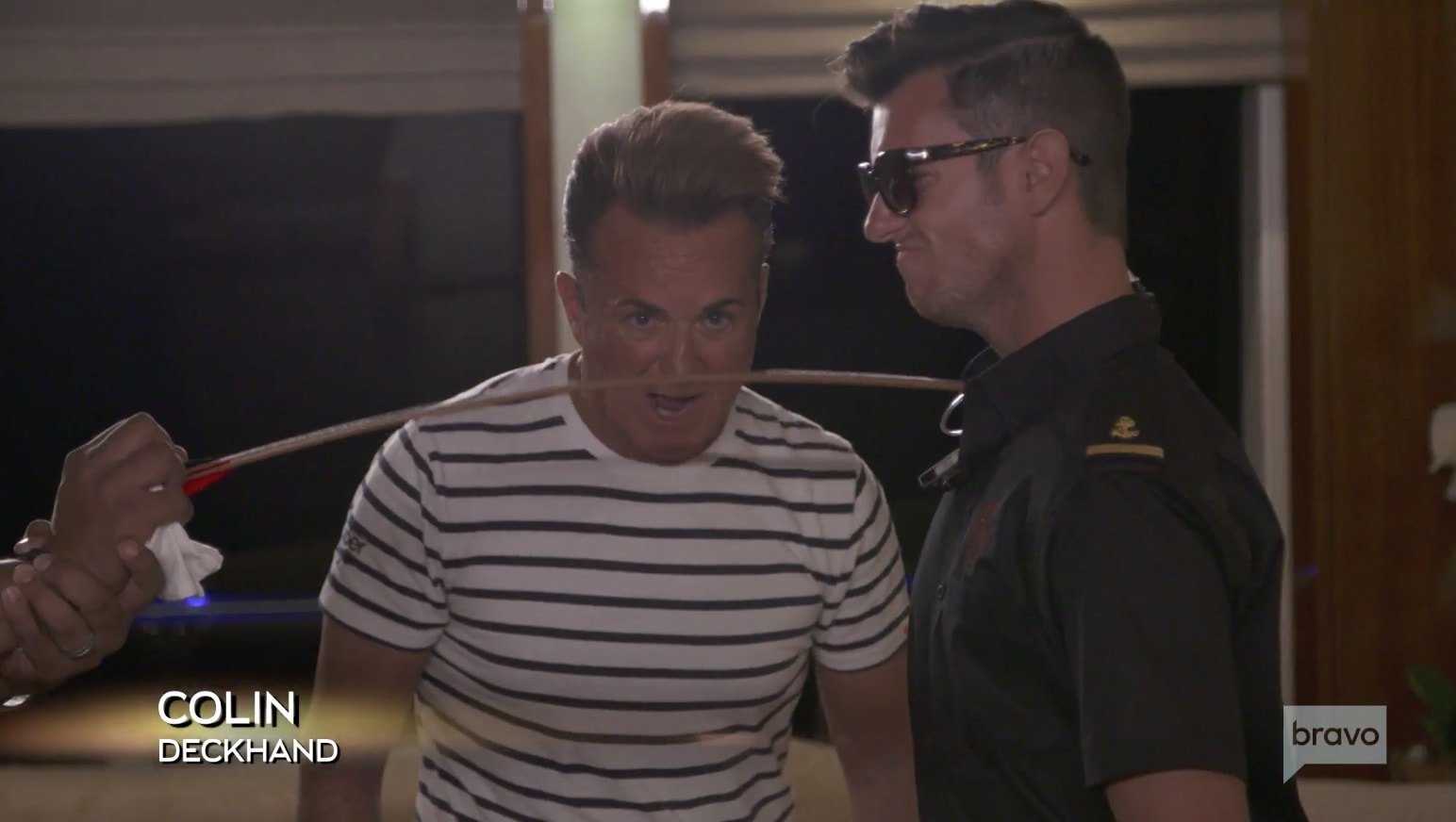 Adam is too inspired by cooking for guests to feed his crew, which is why they must chew each other up. He finally feeds them grilled cheese at 10 pm and they’re so hungry they all shut up for a change. Even Joao. Right as the guests are finishing their 4-course gourmet dinner. Naturally, Daniel decides it’s the time to unleash his surprise. That would be stabbing people with arrows, literally making them fall on arrows right in the heart, to help them find the right direction? Person? Whatever was supposed to be accomplished had the opposite of intents and basically everyone who participates winds up falling out of love.

We did get to learn that Joao has been attacked by a hippo, like a National Geographic special! Funny – I always assumed if Joao made it into Nat Geo it’d be for a rare venereal disease, but it turns out even hippos know a bad man when they see one. And hippos are practically blind! 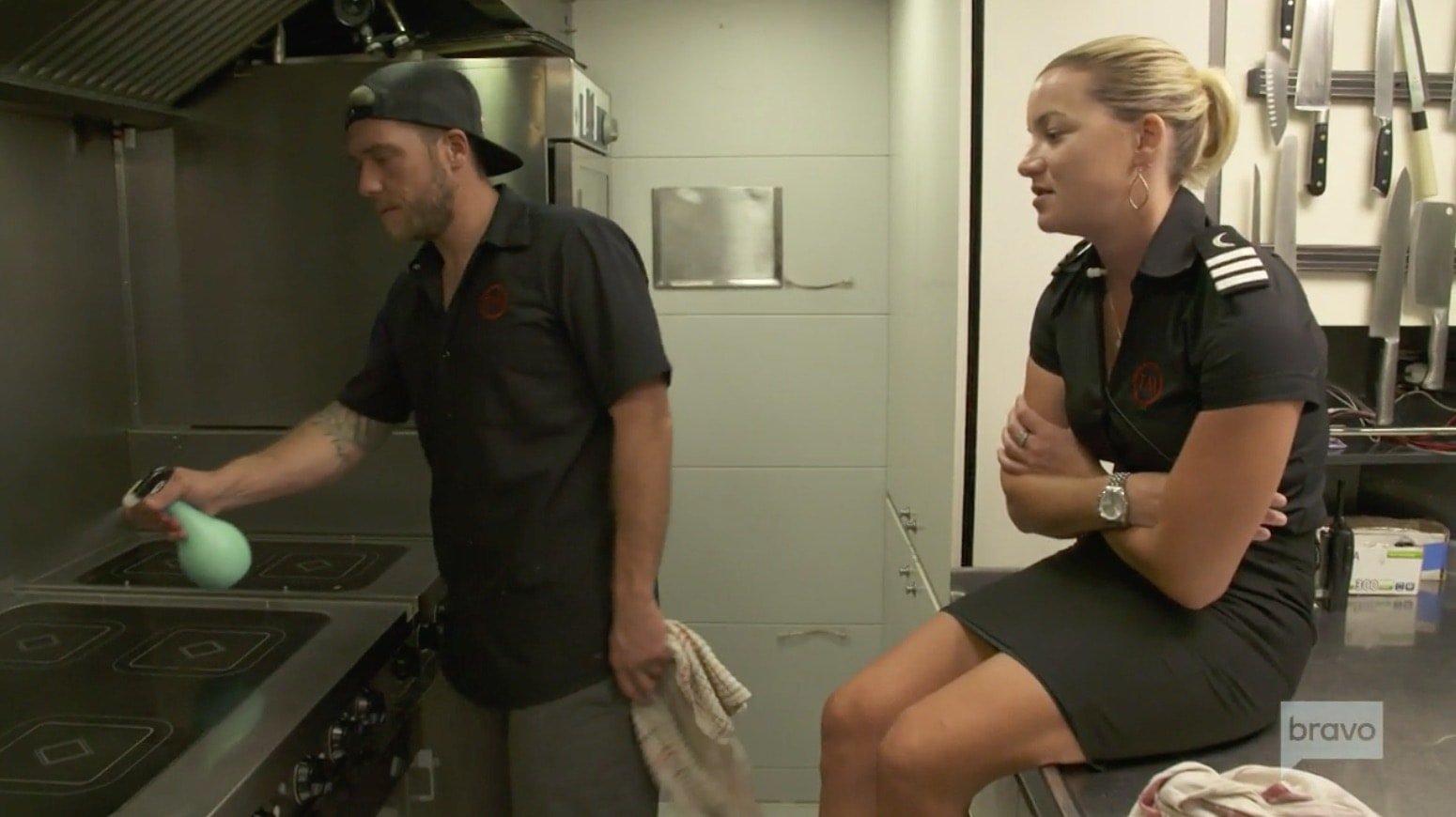 Obviously, Brooke gets stuck cleaning up the majority of dinner again, because Hannah has important cigarettes to smoke and important arguments to have with Conrad. Conrad has just about had it with Hannah being Hannah because he’s realizing that Hannah is basically all about Hannah (and likely Hansane).

The next morning Daniel awakes, zombie-like, stumbling through the ship in hot pants begging for coffee. No one wants to start their morning like that, but at least it’s the last day of the positive affirmations vending machine. Daniel leaves the crew positive thinking bibles instead of a decent tip because money comes and goes, but changing your attitude is invaluable. 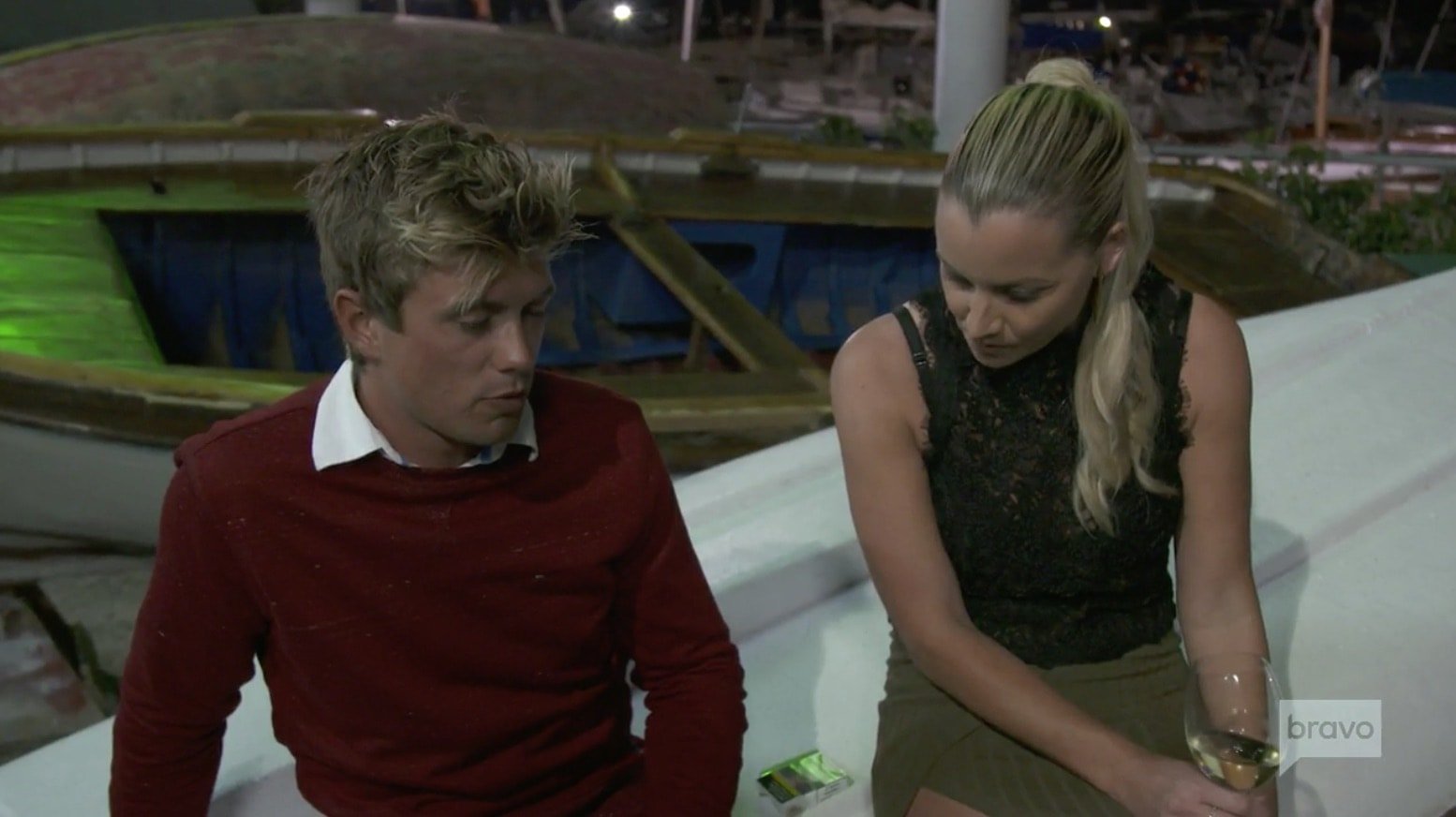 By the time the crew heads out that night literally NO ONE is happy. The positive thinking overdosed and turned them all negative. Hannah sits on one end of the boat taxi talking loudly about her “little black book” filled with all the wealthy men and professional athletes she’s dated, while Conrad, feeling about as big as his age, sits on the other side plotting how he can avoid another poisonous discussion over dinner by making Colin sit next to her. 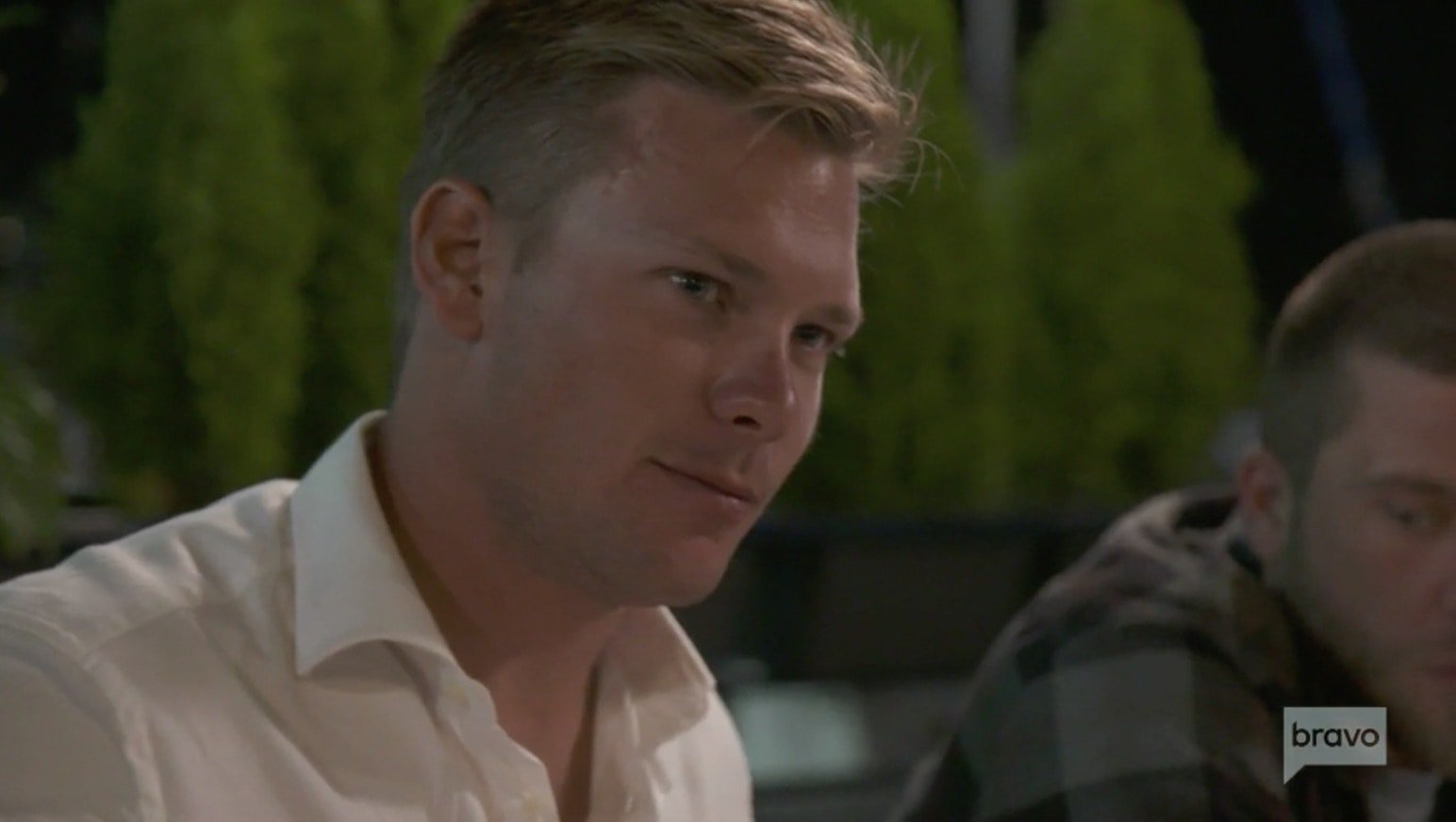 Meanwhile, Brooke has finally caught on to Joao’s flirtation with Kasey. It’s impossible not to notice how he salivates over her during dinner while she subtly flashes him and jokes about her bra and top being see-thru. While Hannah and Conrad are officially-officially breaking up – for real this time (which means no Prague cause you can only go together!) – Brooke lets Joao know, through clenched teeth, that if he doesn’t figure out how to be loyal it’s over. Pssst, Brooke, it’s over! But Colin is there plus his mom rules, so consolation prize is the first place trophy!

Do you ever feel like Bravo tends to saturate the network with a particular show? There are about 846 Real Housewives…
Reality News 2 months ago

Let’s face it: Below Deck Mediterranean hasn’t been the same since Hannah Ferrier left. Of course, the show is still…
Reality News 5 months ago