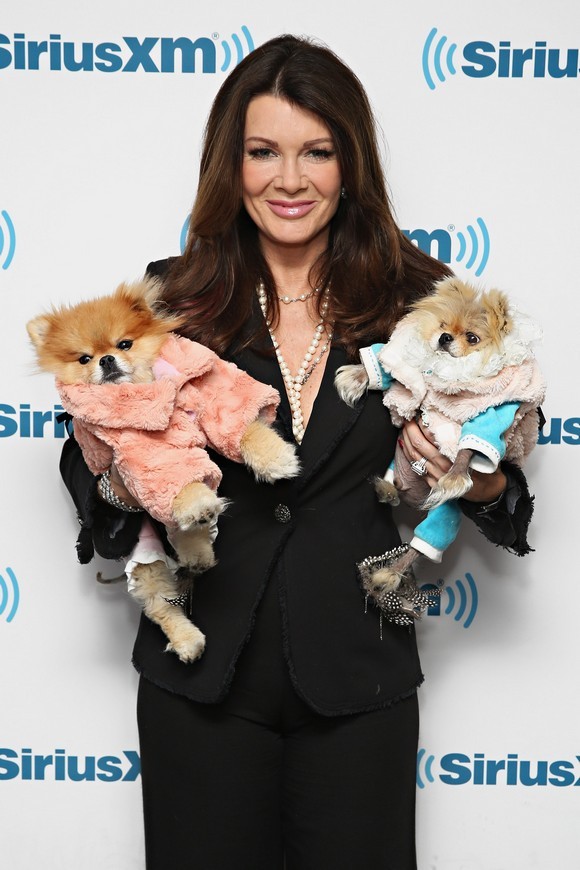 Lisa applauds Bravo for filming the Lyme gala and explains that she was not able to attend because she was scrambling to get her passport in order before the Dubai trip. “I couldn’t go as it was noticed that I had only five months left on my passport and that is unacceptable when traveling to United Arab Emirates. It was all a bit of a panic to renew it in four days. The thought of going all the way to London 22 hours there and back was not something I relished, especially as we had another long flight to Dubai the next day – we tried everything. Anyway I was sent with an escort, LOL, to London just in case I didn’t come back in time. Had I known what lay ahead in Dubai I would’ve stayed longer.” Now the drama..

“When LR came to my disco, and read verbatim the meaning of Munchausen‘s, I can’t remember or recall exactly, but the sentiment most definitely was uneasy. “I do believe I said, ‘I don’t think we should be talking about this,'” recalls Lisa. “Now if I was encouraging her to bring that to the forefront, obviously she would have reacted vehemently to that statement. Not so.”

“In fact, I had, much to my chagrin now, defended LR, trying to appease the situation, explaining that I was aware the source of chatter came from a friend of hers and she was only guilty of repeating it, not manifesting it. Anyway, it really isn’t that important now as the wave of Munchausen’s has pretty much dispersed, but the crux of the matter and the most important factor is somebody is being economical with the truth.”

RELATED: Yolanda Wishes LVP Would Have More Compassion For Humans

Lisa goes on to say that she doesn’t even “support” the Munchausen theory… so why would she waste her energy on it?

“Yes, of course I had questioned the constant ‘sick selfies‘ but to her face at EJ‘s barbecue – it was not included. The response I was met with from YF was that I was a coward for not wanting to draw attention to an ailment or illness. I replied we all deal with things differently. That is the premise of this blog…we all deal with things differently.”

Lisa adds, “I have no interest or motivation for participating in this domain with the intention to sully the reputation of another,” and then she lists all the fun, positive, and/or meaningful experiences she’s brought to Real Housewives of Beverly Hills this season:

“Moments at Villa Blanca, the LGBT Dodger game, the excursion to Ohio in search of a little sexy beast, the celebration of the Ken’s birthday with the English garden party, hosting the Hero Dog awards, the Moulin Rouge party, the Hamptons magazine cover party, and lastly, the cause closest to my heart, the Yulin March, which is heartbreaking, but I’m thankful it was covered as we put our heart and souls into that. Anyway, apart from that, a smorgasbord of events to witness and enjoy.”

Lisa throws shade at what Lisa Rinna and Eileen Davidson have brought to the show, “Now if all I had to offer was to have my ass waxed on a dirty carpet or run my lines or even pulling down old curtains, maybe then I would feel the pressure to spend all season attempting to denigrate the character of a friend, to validate my position as a Housewife, with bitter diatribe, which was a replica of their actions last season. Last season I naively believed that their intentions came, albeit aggressively, from a place of empathy, in regard to Kim Richards. Now not so much.”

“I also have little understanding how these ‘strong, independent women, blah blah blah’ can rely on the feeble excuse that they are manipulated. What? Are we 12? Do we not have a modicum of sense? Make our own decisions? I most definitely see a certain somebody pulling strings, directing the conversations.”

Lisa says, because of the never-ending accusations, the Dubai trip goes to hell next week. <sigh> This season has been such a disappointment. 🙁

In conclusion, Lisa addresses Eileen‘s blog from last week, in which she joked about murdering dogs. “With regard to ED’s last blog, I hear many of you on social media, and yes, humor is something that provokes laughter. I didn’t hear any. The caustic remarks resonated for sure. At least if you don’t support our plight, have some sensitivity to a fellow Housewife’s passion. But, like I said, we all deal with things differently.”

TELL US – ARE YOU ENJOYING THIS SEASON? WHO BRINGS THE MOST TO THE SHOW?