Real Housewives Of Potomac Recap: Are You Talking To Me?

Are you ready for the first cast trip on this season of The Real Housewives of Potomac? Historically, this trips have the most outrageous drama filled moments. There’s already no shortage of drama this season, so it should be one of the ages. Wendy Osefo has undergone quite the transformation so far, and it’s rubbing people wrong. Is she trying to overcompensate for something? What’s the deal?

Gizelle Bryant & Karen Huger are STILL at odds. They’ve been fighting for the entire duration of this franchise. Will it ever come to an end? This season feels darker and more serious than their squabbled in the past. It feels like there’s a chance they won’t be able to repair it this time. Mia Thornton has already found herself in the middle of their back and forth. It won’t be long before she’s asked to firmly chose a side. 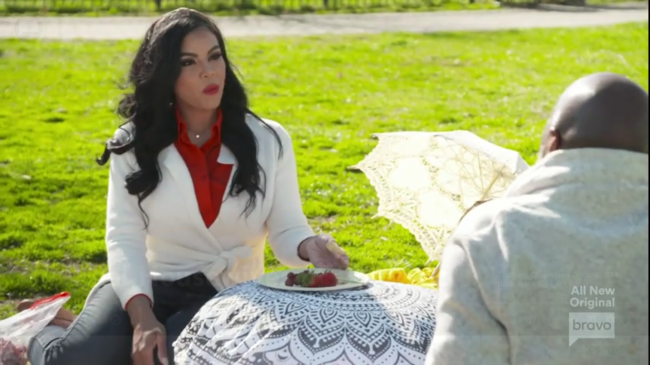 Ashley Darby is home with her new bundle of joy! The new baby is precious. Hopefully things go better for Ashley this time following the birth. She experienced such a deep level of depression last time. Michael Darby should step up this time and try not to be useless. Keep your pants on and be a solid husband and father.

Watching baby Dean meet baby Dylan just melted my heart. There’s something beautiful watching them interact in the most innocent and playful of ways. Let’s hope things continue on a positive path for this family. Nothing but well wish and blessings being sent their way!

Mia’s another Housewife with an adorable family. She’s opened up about struggling to find that work and family life balance. Her son thinks she works too much and too hard. It must be heartbreaking for Mia to hear those words coming from her son.

She didn’t have a lot growing up, so she’s wanting to make their future easier. At the end of the day though, all her children really want is to have a present mother. Striking the perfect balance with that has to be difficult, so no judgement at all for that.

Mia’s mother declined her invitation to spend time with her grandchildren. You’d think she’d want to go out of her way to make up for her shortcomings from Mia’s childhood. LOVE your grandchildren.

For some reason her mother focuses too much on Mia being similar to her father. Sure, that man hurt you in the past. He caused you massive pain. That’s all valid. However, please don’t project that onto Mia and her children. This is the time to step up and make amends. 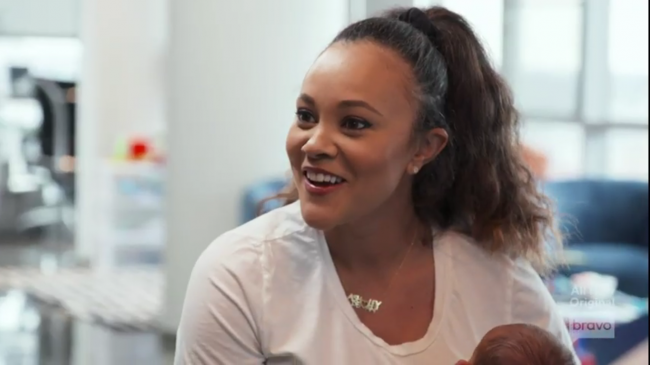 Candiace Dillard Bassett’s packing for the first cast trip of the season. It’s great to see the ladies wasting little time and making the trip happen. Candiace only has a few days to relax though because she has to film her music video soon. In addition to that, her TV filming career is also starting to take off. Candiace has ARRIVED honey. Yes, she has!

Candiace isn’t sure if Ashley will be up for the trip since she recently gave birth. Chris Bassett recommends at least phoning Ashley and extending the offer regardless. Even if she can’t make the trip, it’s a sign of good faith to offer an invitation.

Gizelle stops by Ashley’s to visit baby Dylan who looks nothing like Dean. Gizelle’s not there for that though. She’s there to spill the tea about Candiace’s farewell to her home pajama party. Before too much can be spilled, the new baby gives Gizelle quite an eyeful. That diaper was FULLLLLLLL.

Ashley reveals she had a bowel movement while giving birth this time. There’s really not much we should talk about when it comes to that. We’re good.

Gizelle tells Ashley about the trip, but once again Candiace left her off the invite list. Gizelle decides to take it upon herself to invite Ashley herself. There’s no way Candiace is going to be happy to learn Gizelle’s adding Ashley to the trip.

Wendy’s new sexualized version of herself is rubbing Gizelle the wrong way. She’s feeling herself this season. Is there anything wrong with that? Let her be. She’s allowed to express herself and evolve. What does it matter to Gizelle what Wendy chooses to do? It’s her life.

Of course Gizelle cannot help herself but be messy. She brings up THOSE EDDIE RUMORS and suggests this is reason for Wendy’s new makeover. She wants to speak to Wendy to figure out what’s prompting this massive makeover. If she can get Zen Wen she’s fine, but if she unlocks another version she might regret it. 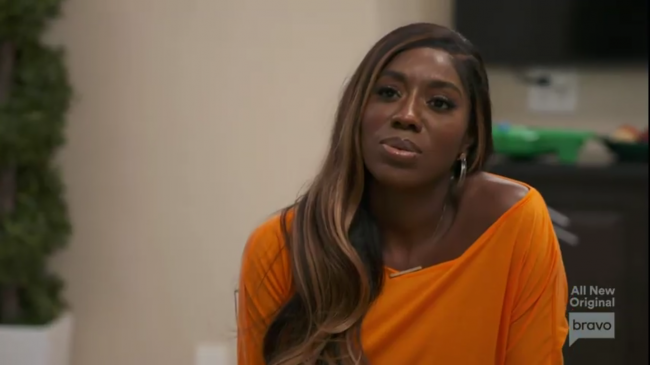 Wendy talks to Eddie Osefo about the struggle finding balance between her professional life and image goals. She wants to dress the way she wants but also come across like a professor. It’s not exactly the difficult struggle Mia’s going through right now, but it’s certainly something.

Eddie doesn’t think Wendy’s able to give 100% to everything in her life. She’s trying to take on too much too soon. The issue with Wendy’s new business venture is she has no clue what she’s doing. To Wendy, it’s all surface level fun and games. The business portion of the company hasn’t been thought out at all. This has all the signs of TANKING.

Wendy doesn’t want to walk away from this idea because it’s her dream. Selling candles is apparently her life passion, so let her do her thang. If she can’t make a go of the home essentials line, so be it. She needs to learn this lesson on her own. You don’t dive into a new business with no knowledge of what you’re doing.

Mia’s finally meeting Gizelle & Robyn Dixon for drinks, and Karen’s not present! The green-eyed bandits got their wish. Shockingly Mia admits to coming in too hot at them, so maybe they can start fresh. For now they are on a clean slate.

Mia reveals her past as a child in the foster care system. After receiving cuts and blood pouring from her the next day at school, she was removed from the home. I can’t even imagine.

Like Juan Dixon, Mia’s father also passed away from AIDS as a result of heroin usage. This is a horrendous thing to go through, but it could be a turning point for these two. There could be a future for a friendship between Mia and these ladies.

This is quite a different side of Mia than we’re seeing in the group. The trip should be a pivotal moment for Mia. She’s either going to make or break her status in this new group of women. There’s still a lot of time to stop rubbing people the wrong way. 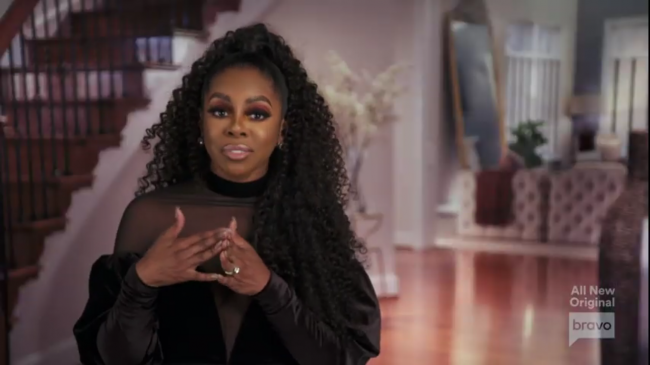 Vacation time has arrived for the Potomac ladies! The bus has a giant ass pole in the middle of it. I wanted to suggest Mia giving the women the performance of a lifestyle. However, she’s not that type of stripper. No experience in pole work if you take what she says at face value.

The new version of Wendy has Gizelle confused as hell. She’s not used to the professor showcasing so much skin and exuding loads of sexuality. JUST LET HER BE. I will say though that it’s a bit jarring. The contrast between this season and last season is glaring.

Karen & Gizelle can’t even try to hide their contempt for one another. So much animosity seeping from their pores. Someone needs to cave and be the bigger person if this is ever going to be resolved.

Candiace is okay with Gizelle inviting Ashley on the trip. It’s just for a day. She’s a part of the group, so there shouldn’t be an issue with this. People in ensemble casts like this should NOT be allowed to leave anyone out.

The ladies test out the stripper pole on the bus, and it’s clear Mia’s seen the pole before. Stop playing with us. JUST ADMIT YOU DANCED ON THE POLE. It’s not that serious. 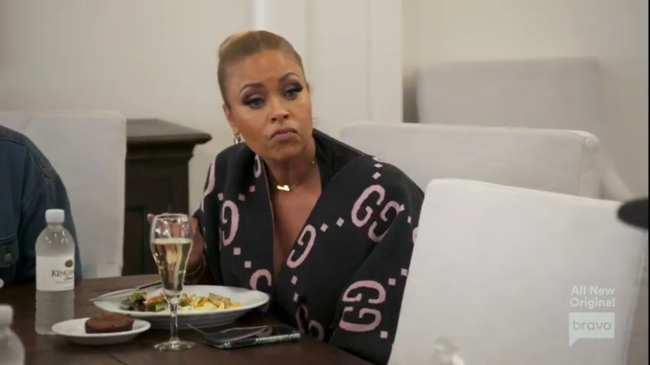 Karen’s hopeful Mia can have a more positive experience with Gizelle. All of the sudden Karen & Wendy are besties though. This has to be a result of Wendy & Gizelle’s weird tension bubbling beneath the surface. The enemy of your enemy is your friend!

The ladies sit down for their first meal of the trip. Karen doesn’t appreciate Robyn & Gizelle moving Mia out of her room. There is a good thing to take note of. All the rooms are the same basically, so what’s the big deal?

Gizelle asks the room if anyone would like the apologize before the trip gets started. Karen responses asking if Gizelle is talking to her. Karen doesn’t like Gizelle needing an audience to have this conversation. She wants full accountability. Good luck with that.

Can we talk about how Karen’s reaching for Mars with her new issue with Gizelle? She NEVER once wished death upon Ray Huger. That never happened. Karen’s pulling this one so far out of her ass.

NEXT WEEK IS GOING TO BE THE BEST EPISODE YET. We’re getting Wendy vs both of the green-eyed bandits. This is going to be next level entertainment. Sit back, grab a drink, and get some popcorn because the professor is coming to school everyone.

TELL US – TEAM GIZELLE OR TEAM KAREN? WHAT DO YOU THINK OF WENDY 2.0? IS MIA A GOOD ADDITION TO THE SHOW? ARE YOU ENJOYING THIS SEASON OF THE REAL HOUSEWIVES OF POTOMAC?

Joe Gorga and Melissa Gorga have marketed themselves as a wholesome Italian-American family. That’s been their schtick on Real Housewives…
Reality News 16 hours ago