Below Deck Season 6 Finale Recap: Slugging It Out

Last night was the season finale of Below Deck and while Krystal may have been the worst charter guest like ever, I agree with Kate Chastain. This has been the best crew and the best Below Deck season. So yay for keeping the equilibrium even at sea. Cause sharing the sea with slugs is what it’s all about, right?!

So obviously the first and worst sea slug to deal with is Krystal herself. She is passed out on deck, wrapped in a blanket, aka a shame cocoon. Except I don’t actually think Krystal has any shame about abusing her friends or the people serving her. After threatening Kate and Josiah Carter several times, Krystal suddenly remembers she has these things called legs, which are attached to there hip bones, so she stomps downstairs to her cabin, slamming the door. Kate, who is practically levitating with rage, immediately goes to bed. Poor Josiah is stuck staying up all night cleaning up after these ungrateful wenches.

The next morning some of Krystal’s friends are up bright and early, at her beck and call without her even asking. With the interior crew sleeping in after the previous night, poor Rhylee Gerber gets stuck trying to deliver Krystal’s tea. Krystal turns her away with the directive: “don’t ever come into my fucking room without asking again.” Um, first of all, Krystal is giving Rhylee a taste of her own vitriolic medicine. But, second of all, that is the way I imagine a modern-day Lady Mary of Downton speaking to the help – or her parents. Krystal is gross. Rhylee, to her credit, did not spit in the coffee or scream “fuck you” back.

Laura Betancourt gets stuck dealing with all of their breakfast orders. This is after she was served a heaping dose of early morning sexual harassment from Adrian Martin. Laura still manages to convey the complicated order of 42 different kinds of omelets, mixed with eggs benedict, French toast, and narcissism over easy with a side of putrid denial. All of which must be served immediately because Krystal is hungry enough to chew one of her friends out and spit her out for not being good enough.

Laura isn’t phased by the order. She’s shocked that everyone is acting like nothing happened the night before! What that means is that Krystal is an abusive drunk who regularly behaves like this, but they’ve all agreed to deal with it for the perks. Aka a Tahitian cruise. But looking like a fool on TV? Um, not worth it.

Of course, Krystal takes 2 bites of her eggs benedict and rejects it for not having ham. Then she sulks waiting while the deck crew blows up the slide with their mouths. Or it seems that way based on how long it’s taking.

After the slide, eating an entire chicken for lunch, Krystal has reached ‘maximum relaximum’ and could die right there on the spot. No one would mourn this course of events. 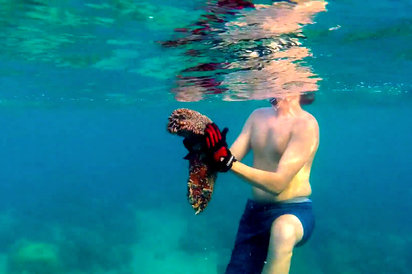 No one cares about Krystal though because Adrian is the one swimming with the fishes. He has envisioned, for his last hurrah, a live-action tablescape of local sea creatures illuminated by LED lights. I mean, it is true that a giant horny sea slug would most certainly distract from Krystal’s horribleness. So, maybe Adrian was just trying to do homegirl a solid? Kate doesn’t approve of a cheap date though. Moments after meeting him, the sea slug ejaculated on her, so she threw him back to sea. Adrian is bummed. He believes all of the earth’s beautiful creatures deserve a spotlight. AAs Kate agrees to use the other items he collected he’ll be fine.

RELATED: Below Deck: Tyler Rowland & Rhylee Gerber Reflect On “The Most Awkward Date” 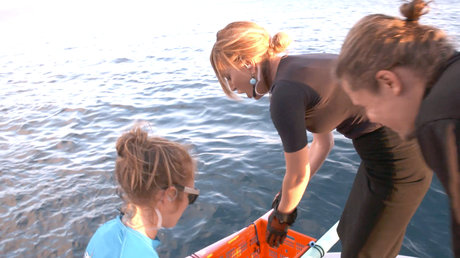 The other living things Adrian collected are brown and bumpy, and turning their water pee colored. Kate rejects them back to the island of misfit toys in favor of beautiful shells and rocks Rhylee has collected. Adrian is too distracted planning an uber complicated 4-course meal to notice. Of course, he is doing all this fancy plate work 1 hour before the surprise fireworks display Krystal’s friends have planned for her. Accidentally participating in slug porn has Kate so stressed that she forgets everyone is actually here to celebrate Krystal’s birthday. Kate was actually supposed to decorate with balloons and streamers. Oops. While the clams are out to jam out, but the balloons… sadly deflated in the storeroom. 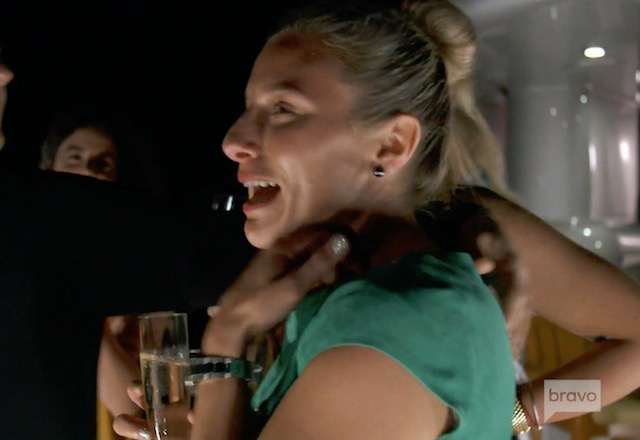 Kate quickly dispatches the deck crew to expel all their hot air into the 3000 balloons, while she ushers the guests through dinner, then up to the crow’s nest for fireworks. By the time everyone is done with the fireworks, Adrian has finally finished some mess of LED lights in upside wineglasses with a blob of jello on top and called it a cake. Krystal’s heart is SO FULL of all the love, she can only manage to half-heartedly scream at her friend Kameron, who has the audacity to be tired on Krystal’s birthday. I mean good for Krystal for demonstrating self-restraint in her older age! 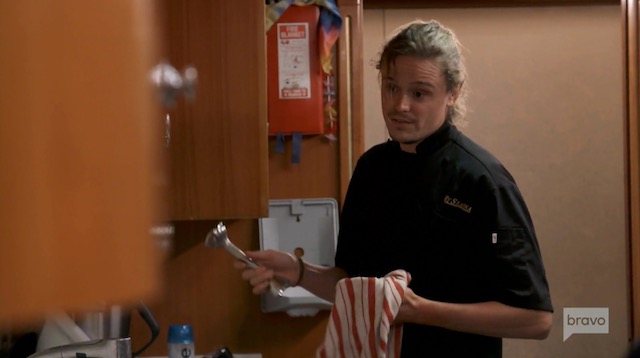 With Krystal safely tucked away in bed, Kate asks Adrian why he picked this charter to start meddling in her tablescapes. They wind up a table scrap over the matter. Adrian is hurt that no one respected his artistic vision or allowed him autonomy over the sacred space where his minions consume. So, he storms out.

The next day it is good riddance to bad rubbish! And we don’t mean the sea slug! Kate is overjoyed to never see Krystal, and her heart full of mirth, again. Krystal may be stingy with her kindness, but not her dollars – she left a super generous tip. Finally, she did something right. 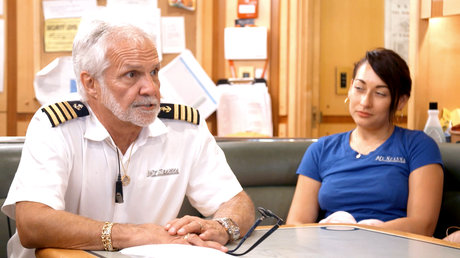 Captain Lee Rosbach practically tears up as he thanks the crew for the most amazing season he’s ever had, and you know what I really, really like this group of people. Some of them (Rhylee, Laura… ) definitely haven’t been my favorites. Still, I cannot believe this season which began with Chandler Brooks and Caroline Bedol, has ended here with a tight group of people who care about each other and have mostly been a delight to watch. Also in comparing the casting from last season — the second half of this season of Below Deck was so superior and great! Much improved. 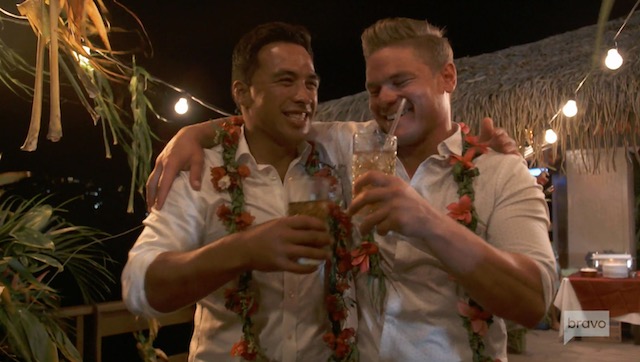 To reward them for their hard work, Captain Lee surprises the crew with a performance by traditional Tahitian dancers, followed by a dinner cruise. The entire experience was magical – Tahiti rocks and it is now officially on my bucket list. So if Captain Lee ever wants to extend some charity on me and host me – for free – on his boat, I will gladly take him up on that offer and I promise to not cuss out the crew or change my preference sheet mid-way through dinner service or abuse the open bar.

RELATED: Captain Lee Rosbach Calls Out Tyler Rowland For Orchestrating A “Dump Date” On Below Deck

After dinner, the crew hits the club where Tyler Rowland gets so wasted he falls over, then falls asleep. Rhylee is unbothered as he grinds on anything and everything – even the bar stool – and relieved that this drunken buffoon is not her responsibility. So blessing in disguise! Tyler is shipped home in a cab early where he passes out, upside-down, in his bunk. Meanwhile, Ashton Pienaar is smitten with Laura, and they are planning to stay in contact once the charter ends. That night Ashton, who is classy unlike Tyler, covers the camera in his room with a shirt before making sweet love to Laura. 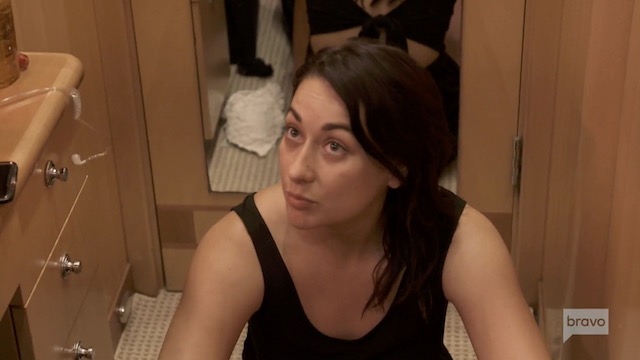 The next morning it is time for goodbyes. And lessons. Laura picks the worst possible time to tell Adrian that his comments towards her were often inappropriate and made her uncomfortable. He blames a cultural barrier and believing they had the kind of open friendship which allowed for sexual banter. Plus, Laura never said anything until you know they possibly will never have to see each other again. Adrian looked so wounded I almost felt bad for him. I think Laura is correct that Adrian should refrain from sexual commentary at work. Still, she should have chosen a better, more constructive time to relay the news.

RELATED: Below Deck: Captain Lee Rosbach On Rhylee Gerber- “That Girl Is Going To Be The Death Of Me”

Tyler is off first and almost seems regretful to be letting Rhylee go. He could have been having sweet sex all over Alaska while eating freshly caught Halibut. Instead, he’s off to burn off his insecurity as a wildlife firefighter. Tyler offers that he hopes one they can knock boots again, because he is an enlightened man who doesn’t need no commitment, brah! Tyler also doesn’t see a need to return to yachting because, like, catering to people and their schedules harshes his freedom flows. All said and done, Rhylee still seems sad and I totally predict that somewhere, somehow these two will reconnect.

Adrian is moving to NYC to be a private chef to a very wealthy couple. Is it Helen and her husband reincarnated John Gotti?

Ross Inia is going back home to meet up with his son. He invites Ashton to New Zealand. These two are definitely BFF for life. Ashton and Laura leave together, for unknown lands. Prague? Josiah and Kate are obviously soulmates, bonded for life by surviving Caroline. Shockingly, they have added Laura to their crewsie. Kate admits she would love to work with them both again in a heartbeat. I actually would love to see these three back next season! Except Josiah wants to be a chief stew in his own right, so… trouble in paradise.

Finally, Captain Lee is the only one left, staring off into the sun, ruminating on another season in the books.

TELL US – WHAT DID YOU THINK OF THIS BELOW DECK SEASON?

Uh-oh, the Drake Passage has nothing on these two. Captain Sandy Yawn and Captain Lee Rosbach are probably the most…
Reality News 1 week ago