Below Deck Mediterranean Recap: Give It The Old Heave-Ho

Heave ho, heave ho, it’s off the dock we go. If last week’s Below Deck Mediterranean felt like a filler episode to reintroduce Aesha Scott, this week certainly ramped up the drama for poor Rob Westergaard. But not before enduring the rest of the drunken charter featuring Johnny Damon and his band of merry pals. Or before dragging out Jessica More‘s heart palpitations from the end of last week into a full-blown medical crisis.

Remember pre-quarantine when Captain Sandy Yawn had a heart attack during SoulCycle? Apparently one in three women die from a heart attack or a stroke. I was not aware of this statistic. But Sandy used the third stew’s heart palpitations as the perfect excuse to inject the episode with a PSA about women’s heart health. First the captain lays Jess down on her couch and checks her blood pressure. She even goes as far as to text a cardiologist friend with Jess’ stats, but the doc says, and I quote, it’s “not that bad.” So, basically the entire medical emergency was all for naught. But I suppose if it helps even one female viewer be more aware of her heart health, it’s worth the tangent. And good thing Jess is OK! Well, at least before she’s about to get her heart broken…

The Damons and their friends finally come back to the boat and Johnny is completely, utterly sloshed. Like, so drunk that Alex Radcliffe manages to strike him out using a biodegradable golf ball. That night, the crew throws a Great Gatsby-themed dinner for the final night of the charter. (Meaning Jess was subjected to ironing laundry in a 1920s flapper costume.) Captain Sandy joins the Damons and co. for dinner, and naturally, Johnny sends his filet back to be more well-done. Because if there’s one thing we’ve learned about the MLB star over the past two seasons, it’s that he wants his food piping hot and overcooked. Also, is Tom Checketts not capable of plating a single meal without Malia White as his unofficial sous chef? His food may be great, but Kiko Lorran didn’t get that same kind of help before being booted from The Wellington. Just saying. 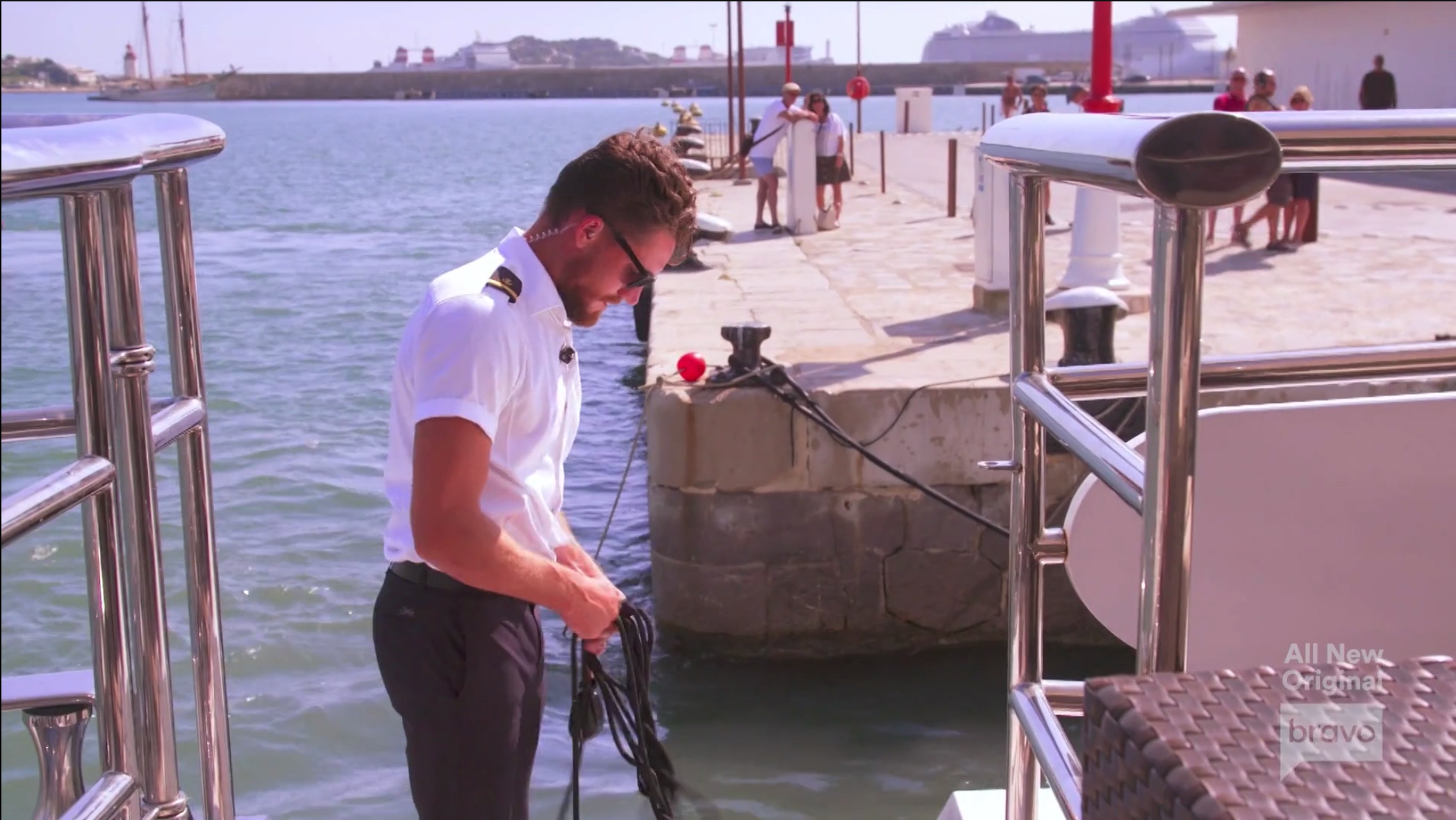 The emotional centerpiece of the episode is Rob. Sweet, sensitive beautiful Rob and his many, many mistakes. First he’s 23 minutes late for morning shift on the last day of charter. (He slept through his alarm.) Thankfully, Alex covers for him, but it turns out to be a harbinger for what’s to come. As the boat docks in Ibiza, Rob’s one job is managing the stern-side heaving line. (Look at me using nautical jargon!) However, as Sandy maneuvers The Wellington, Rob drops the heaving line. Not once. Not twice. But three times. THREE TIMES! Once the charter guests are off the boat, Malia comes down hard on the deckhand for making such a rookie mistake. Via confessional, Rob admits he’s in his head about his relationship with Jess. So much so that it’s affecting his work on deck. One way or another, this is not going to end well.

Rob‘s next mistake is talking to Aesha, apparently. After the tip meeting, Aesha compares Jess‘ relationship with Rob this season to hers with Jack Stirrup last year. (Hint: it ended badly after Season 4 wrapped.) However, once everyone’s talking in the crew mess, Demon Jess shows her jealous face over Rob’s conversation with the 2nd stew over…micropenises and wide vaginas? Yes, you read that correctly. It leads to a full-blown argument between the two on the dock, all while Bugsy Drake and Alex go on a cute, flirty shopping excursion in Old Town Ibiza. However, I can’t quite explain what the argument was even about. Attention? Communication? Looking for things to be upset about? Note: this won’t be the last time an unintelligible argument happens this episode. 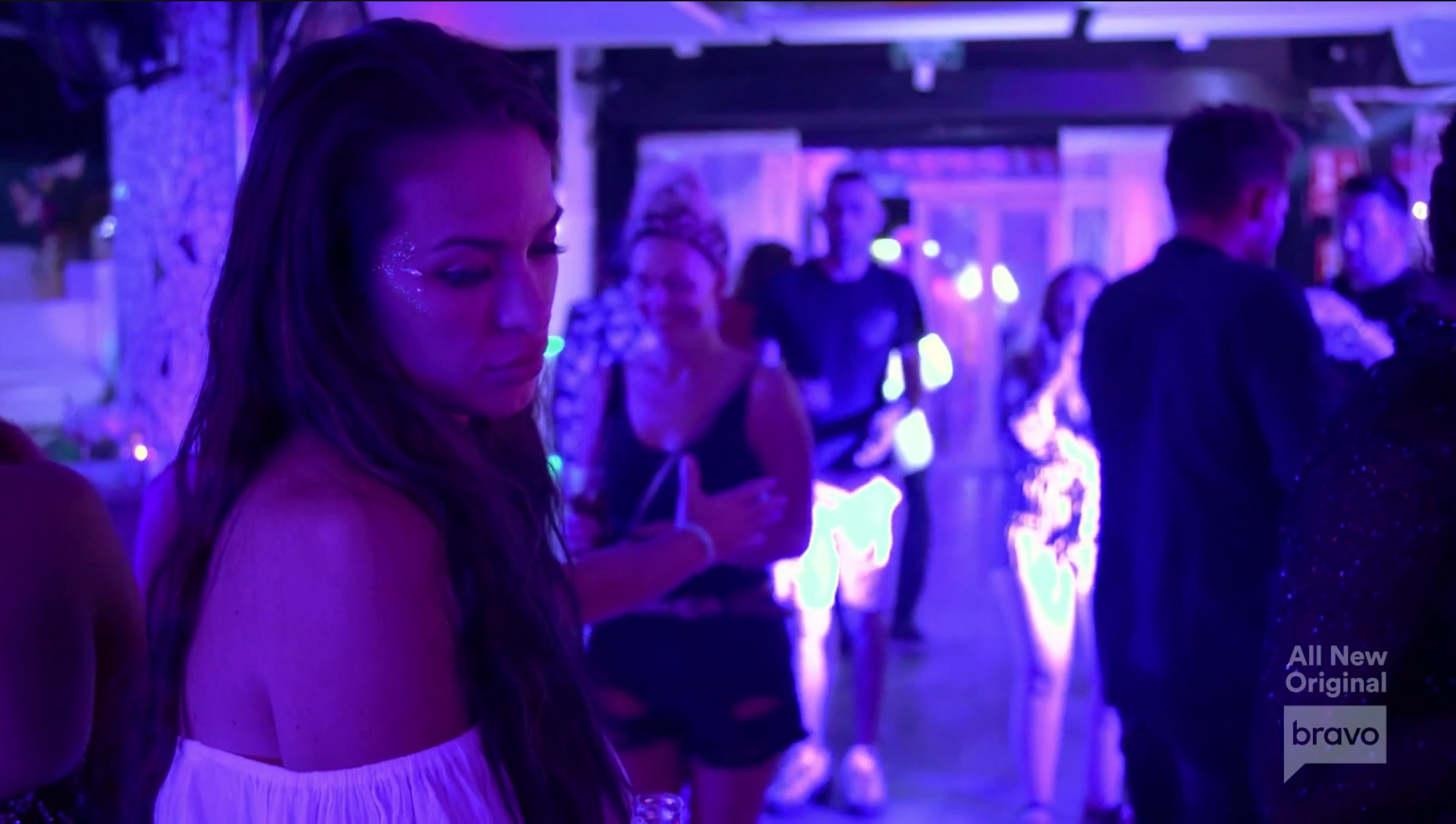 The crew finally earns its first night out in Ibiza and they’re ready to go wild. Except Aesha isn’t feeling particularly connected to the crew yet. Especially not when compared to the wild, foul-mouthed Sirocco crew of yesteryear. And Jess getting territorial over Rob surely isn’t helping her feel all that welcome. However, Aesha isn’t the problem at dinner, where Jess picks yet another fight with Rob over “being present.” It all starts when Jess points out that she, Alex and Rob all worked in West Palm’s Rybovich Superyacht Marina within weeks of each other before heading to the Mediterranean to film. Jess takes this as some sort of sign about destiny, but Rob doesn’t see the point in focusing on the past.

And…they start arguing in front of everyone. Even Bugsy painting everyone’s faces with glitter can’t quell the awkwardness. By the time dinner ends, Rob and Jess aren’t even speaking, fuming and staring silently out different windows in the van. In the other van, Malia ventures a guess that the two are ill-suited for each other. Much of the rest of the crew nods along, agreeing that Rob is “spiritual” while Jess is just “shallow.” Just look at the background of herself on her phone! 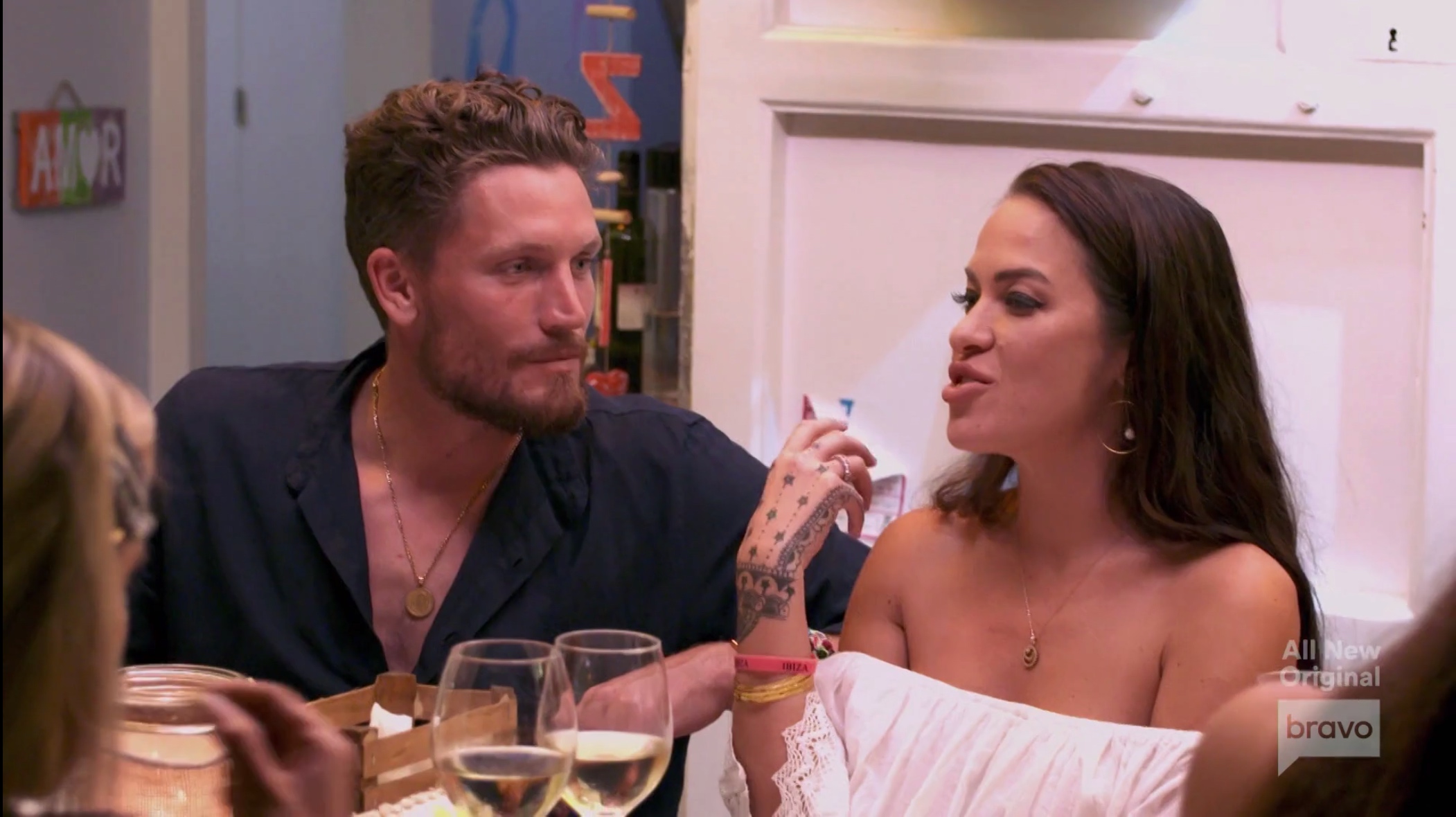 The crew hits the club, where things go from bad to worse for the embattled couple. And this time it is because of Aesha. More specifically because, from Jessica‘s POV, Rob starts flirting with her fellow stew. Aesha is now officially competition and Demon Jess is ready to burn down this entire club with her wrath. While Malia and Tom tipsily talk about getting married, Rob and Jess face off, with Rob questioning why he changed his ticket to Bali a few episodes back if Jess is going to be so hot and cold with him.

However, the biggest, happiest development of the night is actually between Alex and Bugsy! That’s right: after 15 episodes of flirty banter and will-they-or-won’t-they, Alex seals the deal by making out with Bugsy on the dance floor. In the words of the show’s resident teddy bear, bye bye, friend zone! And honestly, I’m thrilled for the pair. Ok, mostly for Alex because I’ve been hardcore rooting for him all season. But while Rob and Jess‘ relationship goes down in flames, maybe Alex can have all of his dreams come true, weirdo to weirdo?

TELL US – ARE YOU TEAM ROB OR TEAM JESS? DO YOU THINK THE RELATIONSHIP IS TO BLAME FOR ROB MESSING UP ON DECK? ARE YOU SHIPPING ALEX AND BUGSY?

Below Deck was a little show featuring the work and play lives of a deck crew on a motor yacht.…
Reality News 6 days ago