Real Housewives Of Potomac Recap: Fishing For Substance In A Sea Of Hypocrisy

It didn’t take long for bedlam to erupt during the first cast trip of The Real Housewives of Potomac. Karen Huger & Gizelle Bryant are doing exactly what they do best; battling with each other. However, this time the root of Karen’s issue with Gizelle is so out of left field. To say Gizelle “wished death” upon Ray Huger is categorically untrue. That’s not at all what went down. This might be The Grand Dame’s greatest reach for a story line yet.

In addition to the Gizelle/Karen drama, things are about to go south for Wendy Osefo. Whether she likes it or not, there are rumors circulating about her husband Eddie Osefo. Thanks to Gizelle, these rumors are being given a platform on the show. There’s no valid reason they had to discuss this on the show, but Wendy’s about to be backed into a corner. Once she learns about Gizelle’s gossiping, Zen Wen will likely be no more. Tick Tock. 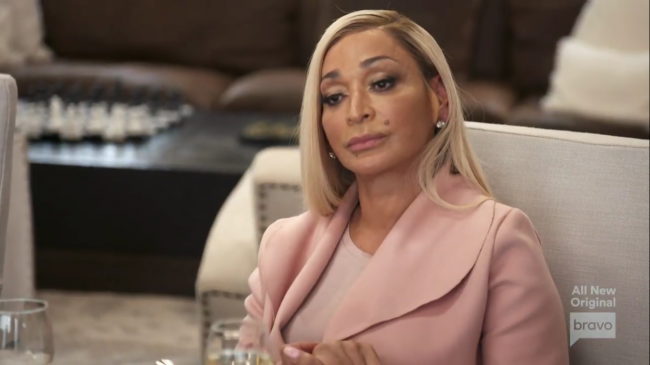 Gizelle & Karen are already in a full on fight, and the trip has barely begun. Karen’s reaching so hard for this one. There’s so many things to use against Gizelle. Why is she choosing something so obscure and irrelevant?

Wendy makes it clear to Karen that it doesn’t sound like Gizelle wished death on Ray. Everyone sees this for what it is. This feels like a desperate attempt for Karen to give herself something to do. Use something more relevant, or pick an issue with someone else. This is tired. Snooze.

Candiace Dillard Bassett is trying to be the voice of reason between both ladies. She wants them to listen to what the other is saying. It’s probably falling on deaf ears. These women have decided to feud forever. They refuse to listen to each other.

Askale Davis & Mia Thornton both find it incredibly uncomfortable to be in the center of this. They aren’t listening to a word being said. Neither is willing to budge on this issue. Karen wants an apology for something that never happened though. If she never wished death on Ray, there’s nothing to feel sorry about.

Candiace wants the fussing to end. These grown ass women have been having the same fight for the least six seasons. It’s time for it to come to an end and move on to something else. They’re grown enough to realize they will never agree and try to move forward.

Robyn Dixon feels guilty Askale is off to the cottage with women she barely knows. If Robyn was a real friend, she would’ve swapped places with someone to make her friend comfortable. Instead she’s keeping herself firmly placed up Gizelle’s backside.

The cottage is a lot less impressive than the main house. It’s somewhat insulting for Candiace to throw Wendy, Karen, & Askale in this lesser accommodation. It’s just not right to ever make someone feel like their on a lower tier. Perhaps, they should go on vacation somewhere where everyone has equal living quarters. 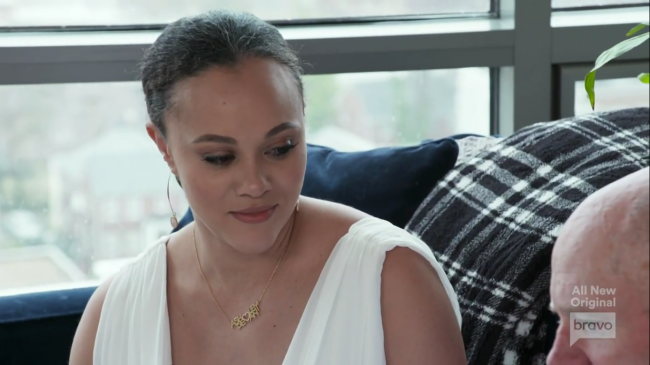 It’s so messed up how the main house has full five star service while the cottage has nothing. The three ladies trapped in cottage hell are struggling to get their baggage up the stairway. However, Gizelle and her bandits have a full staff willing to help with that. Something isn’t right with this!

Ashley Darby & Michael Darby are adjusting to having two diaper aged children at home. It’s a whole lot more work, but they’re keeping it going somehow. Things have changed in a big way for this family. They seem stronger than ever though.

They’re having their first official photo shoot as a family of four! The end result are some absolutely gorgeous photos Ashley & Michael will cherish forever. Cuteness overload!

Dylan developed jaundice which led to him having to undergo light therapy at home. As a result, Ashley & Michael are overtired more than ever. Dylan’s not sleeping through which has to be rough.

Ashley tells Michael about Candiace’s trip and how she wants to go for a day. Surprisingly Michael’s alright with this. We might have some real progress here. He actually might not be a shit husband this time around. Michael’s always full of shocks.

Ashley has no intention on becoming besties with Candiace. That’s not even on her mind. What is on her mind is having an escape from the chaos at home and fun with friends. I’m sure she’ll show up long enough to stir the pot and send everyone into a tailspin. 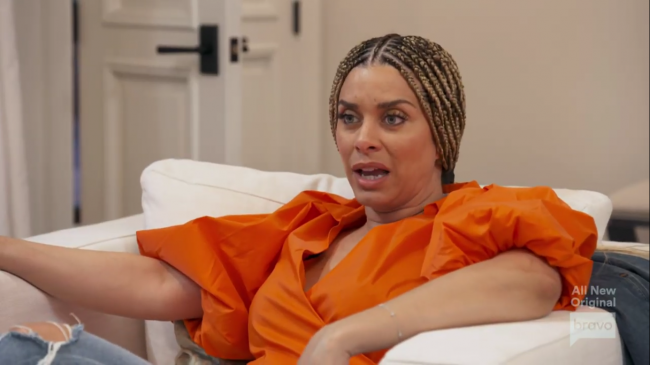 Wendy’s transformation is confusing. That’s the only word to describe it. I love how empowered she feels these days and it’s always great to feel yourself. That’s all well and good. However, what in the hell? Everything about her has changed. Even her personality feels altered. Now her life goal is to sell candles. Nothing is adding up.

Gizelle & Robyn think something’s off with Wendy. Clearly something’s different with her right now. Nobody is saying the Eddie rumors are true, but the timing of the transformation is off.

Robyn says regardless of the physical alterations, something else is off. It’s a shift in personality that’s left her perplexed. This version of Wendy baffles everyone. There’s a lack of substance being exuded by Wendy. That’s how Robyn & Gizelle are taking it at least.

Gizelle references the rumors about Eddie, but neither she or Robyn believe it. Gizelle does however think the rumors forced Wendy to overcompensate for something. It certainly looks that way. There’s no reason Wendy shouldn’t be allowed to undergo any transformation she desires. The part that makes it weird is the questionable timing in line with the rumors.

Gizelle’s planning a water aerobics class for the women the following morning. Are they 100 years old? What kind of event is that? Please never give Gizelle any power on one of these trips again. Nobody wants to watch these women in the nursing home Olympics.

Karen refuses to partake in the activity because she can’t get her hair wet. There’s no desire on her end to swim in the pool with Satan (Gizelle). It’s honestly a smart idea to keep them out of the water together. Last season we had a beat down, so let’s avoid a drowning this year.

Candiace opens up about the reversed gender roles of her marriage. Sometimes it makes it uncomfortable, but they dynamic clearly works for them. The one issue they’re running into is when he is the husband and when he is the manager. Finding that balance has proven to be difficult.

Candiace knows in her heart Chris Bassett isn’t using her. She knows her marriage more than the other women in the group. If she trusts him, that’s all that should matter. They don’t live her life. 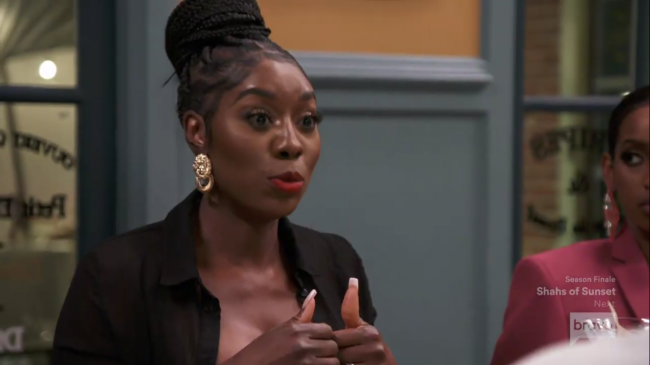 Robyn discusses her difficulty getting out of bed in the morning. It’s starting to affect her relationship because Juan Dixon finds it unattractive.

Gizelle’s surprised to hear Robyn’s making no effort to change things. Karen doesn’t understand why Gizelle wouldn’t just be there for her friend. She should be lifting her up during this time not challenging her.

Gizelle even goes out of her way to ask Robyn if she’s neglecting her children. Why the hell is she throwing her friend under the bus like this? That’s the type of conversation that should be had with her friend in private. Is nobody off limits?

Askale warns Robyn her symptoms sounds a lot like depression. Robyn wants to see a life coach or something to figure out what’s going on and how to fix it. The lack of energy and motivation is causing other parts of her life to suffer. She can’t keep going down this road.

Gizelle takes this time to ask Wendy about the difference in her looks and personality. Robyn hops on the bandwagon as well. The physical change has been jarring, but it’s the personality 180 that has them puzzled.

Candiace can’t understand why Robyn & Gizelle are up in Wendy’s business. I get Wendy doesn’t want to be placed in a box. Nobody is trying to take away from her accolades and accomplishments. However, it’s the PERSONALITY that’s changed. To me, it’s like she’s on a full on second season glow-up high. She took that Bravo check, and altered EVERYTHING.

Gizelle cites Wendy’s newfound brash attitude when confronting people as a reason for this interrogation. That’s weird because that’s actually not any different. We saw Wendy comes for people last year too. She’s not any more or any less aggressive than before. Don’t go there.

Askale randomly asks Gizelle about her relationship with Jamal Bryant, but she won’t discuss it. Nobody thinks that’s fair. The group as a whole wants to be there for this conversation. Karen shouts at Gizelle about her life being a lie.

I’m entirely Team Karen with this one. Gizelle decided to go around the entire table and commented on nearly everyone’s life and relationships. She had comments about Candiace, Wendy, & even Robyn. However, when it comes to her and her own life, it’s off limits? No. Fuck that. That’s not how this works. Gizelle isn’t above being grilled about her life.

Prior to this, Wendy was under the impression she and Gizelle were in a great place. Well, that’s about to change. Take whatever friendship you thought you had and throw that bitch out the window. It’s dead. Gizelle saying Wendy has NO SUBSTANCE now was way out of line. Whatever happens next, Gizelle deserves.

TELL US – DOES WENDY LACK SUBSTANCE THIS SEASON? TEAM GIZELLE OR TEAM KAREN? IS GIZELLE WRONG TO DISCUSS THE RUMORS ABOUT EDDIE? ARE YOU ENJOYING THIS SEASON OF THE REAL HOUSEWIVES OF POTOMAC?

Captain Lee, Captain Lee, it’s Angie. I’m going to need someone to come take the trash out. The fish is…
Recaps 15 hours ago

Unfortunately for us fans, Real Housewives of Potomac Season 7 is winding down. It’s been a wild and wonderful season…
Reality News 4 days ago