Kim Richards Says Her Recovery Is None Of Our Business; Defends Yolanda Foster And Bashes Lisa Rinna 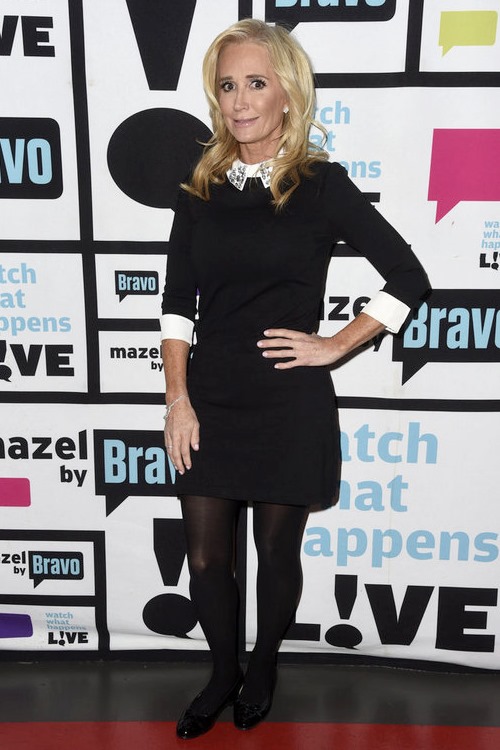 Kim Richards sat down with Andy Cohen on Watch What Happens Live last night. Kim talked about her sobriety, her legal problems, her current opinion of Lisa Rinna, her name popping up on The Real Housewives of Beverly Hills every two minutes, and more.

Kim said she is “doing great” since Monty Brinson‘s passing. “I was not really sure how I would be,” admitted Kim. “I was a little nervous myself. But, my family and I, we’re all sticking very close together. He’s our angel over us. It’s amazing. I’m doing great.” Kim went on to explain why she’s keeping the details about her recovery private this go-round.

“I’m in recovery,” shared Kim. “The last time I shared my recovery with the world, it became no longer mine. I went public with my recovery – ‘I’m sober, I’m sober‘ – and it became everybody else’s. It was too much focus on myself. This time in my recovery, I have decided to keep it for myself. I do share it with my children so that they don’t have any worries and that they know I keep them up-to-date on what I’m doing in my recovery. But, for the public, I have decided that it’s really not their business.”

In the past, Kim said being on the show helped her stay sober, but now she’s not on the show and she’s not sharing her recovery with the public… “There’s a clause in the 12 traditions that it’s not for public, radio, or television, and there’s a clause in there for a reason,” stated Kim. “It really is anonymity and it really is for me. The fellowship is a great place for me to share.”

Kim‘s thoughts on Real Housewives of Beverly Hills so far this season?

“I didn’t catch a lot of the season, because I was taking care of Monty, who was very sick,” said Kim. “Kyle had told me that Lisa [Rinna] wanted my number to wish me happy birthday and I did remember that Lisa had my number because Lisa has sent me a few text messages last year. Kyle said, ‘I told her that would be weird.’ I said, ‘Was she joking?'”

Andy asked Kim if she feels the ladies are genuinely concerned when they ask Kyle about her.

RELATED: KIM AND KIMBERLY ON THE MOTHER/DAUGHTER EXPERIMENT

“I just feel like why did they have to discuss me on the show when I clearly was not a part of it. But I do feel like Lisa cares. I feel like my sister of course cares. I don’t feel like it needed to be done there but it’s done. I feel like it’s genuine. I know that Lisa Vanderpump called me the other day, ‘Hi, honey, we miss you. Come for dinner.’ I’ve met Erika and Kathryn. I really like these girls. They are both so genuine.”

Kim said that she did “happen to” see one episode and it just “happened to” be when Lisa Rinna called her a “vicious, vile dog,” adding, “I was just wondering, who’s the dangerous one in this situation? Yeah, there were some words thrown around, but I don’t know who was the dangerous one in some of these situations.”

About her talk with Kyle on the show last week, Kim shared, “It was hard. It was very difficult.”

“The hurt won’t ever really go away. I couldn’t return her phone call for a while,” shared Kim. “She called and reached out to me and I just wasn’t ready. I said to her, ‘I have to put those things aside, and if you want to move forward, I feel that’s what you need to do too.’ I missed her. As sad or as mad as I was, I need to put those away in order to have a relationship with her again.”

Andy moved on to Kim‘s legal woes. Kim said she couldn’t talk about Target, as it is an active legal issue, but she offered up an explanation for the Beverly Hills Hotel incident.

RELATED: KYLE TALKS ABOUT WHAT SHE DOESN’T WANT TO TALK ABOUT

Kim admitted that she drank the night of her arrest, as well as one night a week and a half prior to her arrest, and admitted that she had given up. “I had a son that wasn’t well, he had been sick, and Monty was battling cancer. No excuse, but I stopped focusing on myself. I stopped taking the time for me and going to meetings because I was taking care of other people and stopped taking care of myself.”

“Then, the stuff on the show, Lisa Rinna accused me of using and alcohol, and she claimed, ‘She lied! She wasn’t sober for three years!!’ I was sober for going on three and a half years,” insisted Kim. “Then the pain pill, which I’ve owned, I’ve said I took it. A week and a half before the hotel I had a glass of wine with a girlfriend.”

“Almost two weeks later,” continued Kim, “I had been to visit my son and then I went to Brooke‘s home that night and I stayed at her house and I watched a few of the reunions. I hadn’t watched any and I had to blog. I had a drink at her house. I felt horribly guilty and I thought I needed to go home.”

Kim said Brooke lives a block and a half away from the hotel, and right as she came to it, it dawned on her that she was driving under the influence. She went into the hotel, to wait it out, but the bartender said “time to close” and she had to go. “I really thought he was joking,” she said about his threat to call the cops if she didn’t leave. “But he called the police and one thing led to another.”

Was that rock bottom? “Truthfully, I was almost relieved it had happened,” said Kim. “I needed a break. I was exhausted, mentally and physically. I was tired. I just felt like I couldn’t handle any more at that point. I needed a break.”

Circling back to Real Housewives of Beverly Hills, Andy asked Kim for her thoughts on the doubt surrounding Yolanda Foster‘s health, “I’ve watched my friend suffer for years now. It’s very painful to watch her. She’s weak; she’s in pain; she’s suffering clearly. Once again, I watch one person continue to bring up somebody else’s stuff. Somebody else’s pain. Something she knows nothing about… nothing about my stuff… nothing about Yolanda’s stuff. She just keeps bringing up other people’s things. It’s horrible.”

Andy asked about the “it’s not fun to be sober” t-shirt Brandi Glanville had on while filming with Kim. “Brandi doesn’t like to be sober,” she said. “That’s okay.”

But is it hard to be around Brandi when she’s constantly drinking? “She is not constantly drinking,” argued Kim. “She likes to drink when she goes out. When we’re together, she doesn’t drink. When we hang out and do our thing, she doesn’t drink. When socially we go out, all the girls drink. I’m just curious, why is it bad for Brandi but it’s not bad for all the other girls? Why is only Brandi a bad friend and they are all not bad friends?”

What would Kim say to Lisa Rinna if they came to face-to-face?  “I don’t know, because I feel like every time I’ve tried to talk with her, it’s dangerous. She confronts me in a not-so-nice way. It’s been a whole almost two years since I’ve seen her… and I am a viscous vile dog… and I am crazy. It is concerning to me why somebody after two years is scared of me. I don’t get that.”

TELL US – YOUR THOUGHTS ON KIM’S ONE-ON-ONE INTERVIEW?

If you haven’t seen the new Peacock original series, The Traitors, do yourself a favor and RUN to your TV…
Reality News 12 hours ago