Real Housewives Of New York Recap: Jam Out With Your Clambake Out

“I’m not quite sure if I’m invited or not but I’m inviting myself,” shrugs Ramona, arriving at Barbara Kavovit‘s much-anticipated clambake. She believes wine is the salve that soothes all social wounds. So by bringing two bottles of rosé, PLUS a fancy pie, there’s no way she’ll be turned away. Who knew she’d leave with so many party favors.

How is Bethenny even at a clambake? Isn’t she deathly allergic to fish and can’t even have it in the air?

Right from the start, Ramona is messier than eating a lobster without a bib. Tinsley Mortimer trails behind her cleaning up those social messes. Ramona ignored Bethenny Frankel completely (not even condolences ), talked crap about Luann de Lesseps, and then conned Barbara into letting her take dinner home, like this is curb-side pickup from Applebees.

While Ramona was making her rounds of social ills, Bethenny and Luann sat in the corner, like Statler and Waldorff from the Muppets, providing commentary. Bethenny, wearing some sort of fortune teller’s kaftan, actually predicted Ramona would put some clams in her purse. She was just a shade off base.

And Ramona is definitely a clam girl. She describes Barbara as “masculine and manly,” aka not her type of girl. Um, there are no women who are Ramona’s type of girl – she’s completely insane.

Say what you will about Tinsley but she does have excellent social graces. She greets Bethenny with just the right amount of sympathy. Bethenny is wearing an ENORMOUS diamond ring on the wrong hand, but Tinsley knows there is more to the story than just a pretty accessory. Bethenny reveals that Dennis Shields proposed shortly before his passing. She said yes with the condition that a lot of things change. However, by the time Dennis passed away she was already in the exploratory phase of dating others. She has now accepted a date with someone who she’s been talking to for months. Tinsley advises grabbing him before someone else does! Well, Bethenny is nothing if not a woman who washes her hands of things quickly. Let’s hope Dennis’ ring doesn’t fall down the drain.

Sonja Morgan actually reminds Ramona that Bethenny recently lost her fiancé, so she should you know, personally extend her condolences. But Ramona already did that in a text! Which Bethenny ignored, so apparently the ball is now in Bethenny’s court? Also, Ramona has other focuses at this party: getting dirt on Luann. 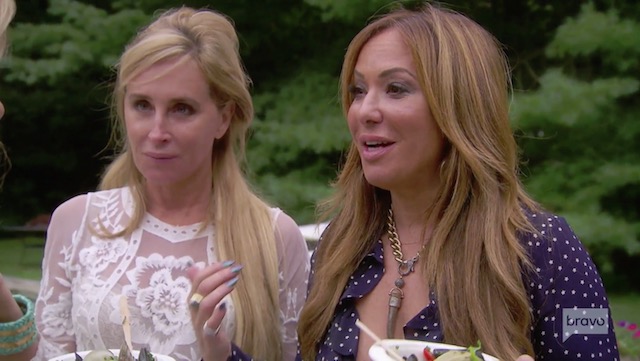 Right away Luann tried to confront Ramona. She was prepared with evidence, iPhone at the ready, but Ramona scurried away (like a crab!), to instead go talk about Luann to Barbara while disguising herself as an ambassador for the Embassy Of Dorinda Medley. So far, I really like Barabara and Sonja together. That will be short-lived, because by the end of the episode Barbara was already displaying thirsty antics. But, for now, I am supporting Team Barbonja.

In between bites of clams Barbara and Sonja point out that all Dorinda had to do was call Luann to say hello. She chose to stay home and watch Law & Order instead enjoying an all you can eat clam buffet.

Ramona is the master of messiness. So, she brings the conversation back to herself by mentioning that Luann has also done unforgivable things to HER. According to Ramona Luann is not truly sober without proudly proclaiming her addictions to the world. With spirit fingers and jazz hands. Ramona actually provides a demonstration of how one does this. But she’s just glad Luann is doing OK now, instead of getting kicked out of hotels for being drunk like earlier this summer. 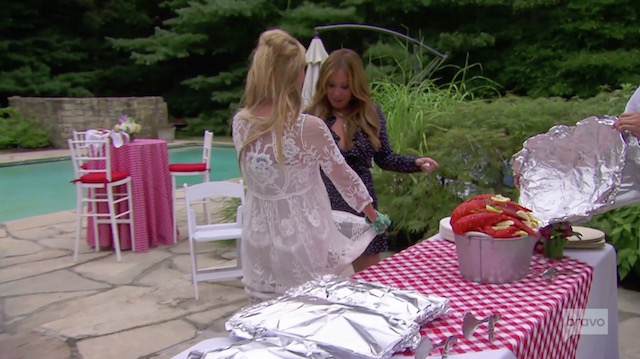 Then ‘Wham, Bam, No Thank You M’am,’ because Tinsley’s alarm goes off and it’s time to go check in on depressed, dejected Dorinda. So, they literally dump lobsters in Sonja’s dress (which conveniently has a net skirt). I swear Ramona stole her pie back. Tinsley has a conscience so she feels rude, but Sonja and Ramona reason that Barbara offered. And this is why Real Housewives Of New York rules. With no trace of irony, Sonja declares, “I’m not leaving the lobsters. That’s who I am. That’s just who I am.” And that is just who she is… a woman who repairs old underwear with dental floss. 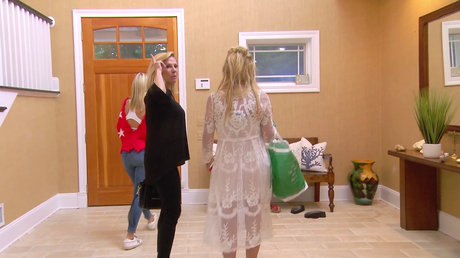 THE Countess returns when Luann imperiously declares that as punishment for Ramona’s abhorrent behavior she deserves the dog house instead of a doggy bag.”Who leaves someone’s house with multiple lobsters,” agrees Bethenny. “Why not just take a f–king end table while you’re at it!?” I mean seriously. Is Barbara like the soup kitchen for down and out UES divorcees? But the lobsters have left the building in Sonja’s skirt, in Sonja’s Firkin, under Sonja’s BumpIt! and in Ramona’s plastic grocery bag, probably on top of the pie. Poor Tinsley. But they had to make it nice for Dorinda, you guys! 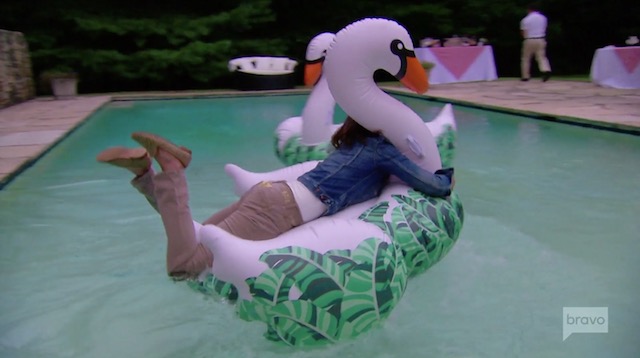 Everyone needed a shower after all that ickiness. So, Barbara, Bethenny, and Luann dive in the pool. Also, Bethenny did an impersonation of Ramona walking into the party crazy eyes ablaze.

It turns out Sonja even took a road soda of wine. Back at Ramona’s house of shade and slander, Tinsley is so stressed she emotionally eats caviar. Meanwhile, Dorinda rants about her exclusion from the clambake. Dorinda is adamant that Luann owes her an apology for telling the press she’s an alcoholic. She’s pissed that Barbara chose to support Luann over their friendship. Sonja tries to remain neutral by pointing out that Luann is going through a lot, with the lawsuit and rehab, and that Sonja had tried to enlist Dennis to help with Luann’s financial issues before he passed away.

“How smart can Dennis be? He was on drugs,” snaps Ramona. That is is an unforgivable gaffe. Sonja and Tinsley are aghast. “Alcohol excuses a lot, but not that statement,” sums up Sonja. Yeah – no amount of caviar can eliminate the stress of Ramona’s insensitivity.

Then it’s back to New York where Bethenny immediately hops on a plane to North Carolina to provide hurricane relief with BStrong. Bethenny’s humanitarian work is amazing. Bethenny is trying to view walking through the grief of Dennis’s death as similar to surviving a storm. Meanwhile, Luann proves that money is no longer a problem – nor can it buy you class.

Luann’s cabaret is soooo successful she’s moving into a NYC apartment as her primary base. “Not even nine months ago I was in jail, and now I’m a cabaret star. It’s insane.” I’ll agree with that. Totally insane, but such is the rags to riches story only possible on Real Housewives Of New York. Although it usually goes the other way: riches to rags (See: Morgan, Sonja). So, cabaret all your cares away, Countess! During the move Luann cannot stop talking about herself. She’s now drunk on her own delusion of success. She brags about how all her homes are on water. So, she can take her boat from place to place. She got the boat! (Not the yacht!). Do we really think anyone on this show is getting back on a boat? 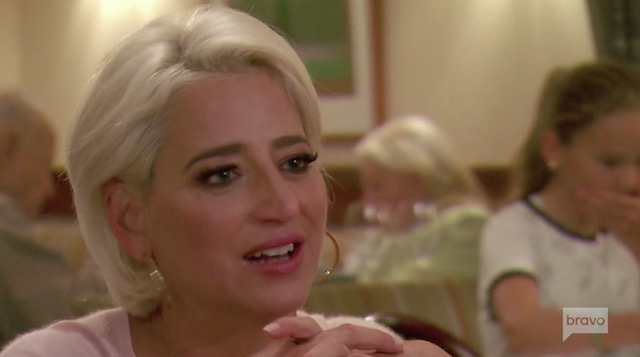 Away from the influence of Ramona and alcohol, Dorinda decides to try and fix her friendship with Barbara. They meet for dinner. Barbara is still Team Luann. Barbara wants Dorinda to understand that helping Luann through sobriety is her first priority, and Luann is still hurt over the Jovani heckling. Like with addiction, the first step is admitting you have a problem. In this case, it means Dorinda admitting she heckled the cabaret. That was the cabaret equivalent of standing up and objecting the union at someone’s wedding.

Luann needs to unzip from the Jovani! I mean, she won’t because Luann takes cabaret more seriously than she takes her own children, but I’m tired of hearing about. NO-vani! Barbara and Dorinda eventually agree to disagree and let Dorinda handle her drama with Luann at her own pace. Like at Sonja’s Paper Magazine party!

Sonja scored a legit spread in Paper Mag, posing with a refurbished designer hardbag collection. Which is the perfect collaboration for the woman who lived like Miss Havisham for years and has finally thrown the moldy wedding cake in the garbage (she probably froze a piece though). 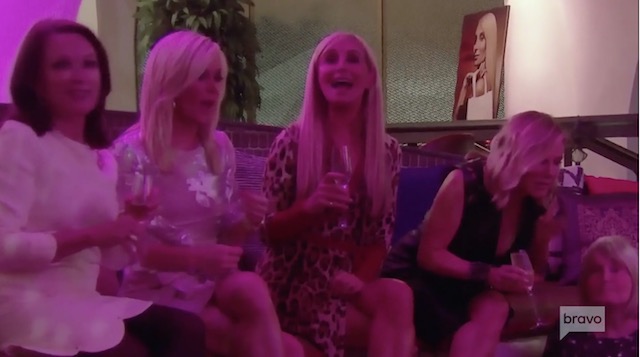 Even Bethenny is impressed, because Paper Magazine is a real magazine. Unlike Latino Show Magazine. She reminds us that Kim Kardahsian “broke the internet” on Paper. So, we can only imagine what Sonja will break. But she does look lovely. Also, the party was amazing.

Luann arrives dressed like she’s going for an afternoon of boating (hint, hint girls!). Ramona wore a dress whose back looks like a complicated net. I swear, she loves lace, mesh, and macrame so much because she can ensnare men in her web of dysfunction easier. 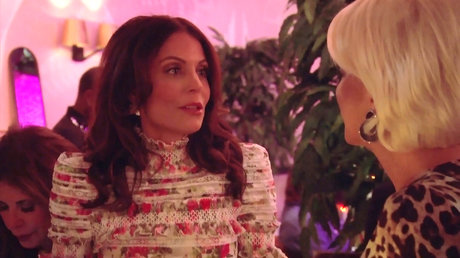 Bethenny and Dorinda are having a beautiful conversation about surviving loss. Dorinda is supportive and empathetic to what Bethenny is going through. As Bethenny says, this is the Dorinda everyone loves: earnest, compassionate, insightful, and supportive. It’s a world of difference from Dorinda after 2 martinis and the wrong sideways glance.

The positivity has Dorinda deciding that wants to just talk to Luann. Just to say hello. Baby step towards possibly rebuilding from Jovani. Please do not offer Luann any connections to a shoe company in the process. Except Barbara butts in and Barbara has a lot of opinions on how Dorinda should handle Luann. Even after Dorinda asks her to stay out of it, she can’t! Barbara runs over to Luann, who is having fun with Sonja and Tinsley (and even being pleasant to Ramona), to whisper about Dorinda telling her not to get involved.

That’s when Bethenny calls Luann over, and as she tenuously makes her way across the room Dorinda starts to panic. To be continued…

TELL US – TAKING LOBSTERS AS PARTY FAVORS: YAY OR NAY? DOES DORINDA OWE LUANN AN APOLOGY?

One of us! One of us! Believe it or not, Katie Rost from The Real Housewives of Potomac is just like us!  Late last…
Reality News 17 hours ago

We are a community in mourning. The classic Real Housewives of New York City is dead. And the long-teased Legacy…
Reality News 5 days ago

No doubt The Regency is holding a vigil. Page Six is reporting that the recently announced Real Housewives of New York reboot “Legacy” season…
Reality News 6 days ago

Hello and welcome to another edition of Housewives Doing Things On Social Media, which is the unofficial title of this…
Reality News 1 week ago