Really Vanderpump Rules has come down to a Fund-Rager and a contrived roast of Jax Taylor, which coincidentally happened while Brittany Cartwright‘s extra-crispy mama is in town? It’s so contrived. All of it. And it really frosts my lipstick.

But first, it’s Tom 1‘s party and everyone will cry if they want to, cry if they want to – you would cry too if these friends happened to you! The boys really got the birthday shafts, didn’t they – the girls got trips to Montauk and NASCAR, and they get made fun of and forced to do charity work. HA.

Well, Tom turned an indeterminate shade of 30 and celebrated not by raising awareness for himself or his attuned and wrinkle-free skin, but by inviting all of his friends to donate their easily-earned money to charity. Kristen Doute brought her crisp $20, handed it to the collection emcee and announced that now she has full-license to be bad for all eternity in exchange for this one good deed. Jax didn’t have that luck – his card was declined when he tried to give a measly $100. His karma, as always, remains, in despair. 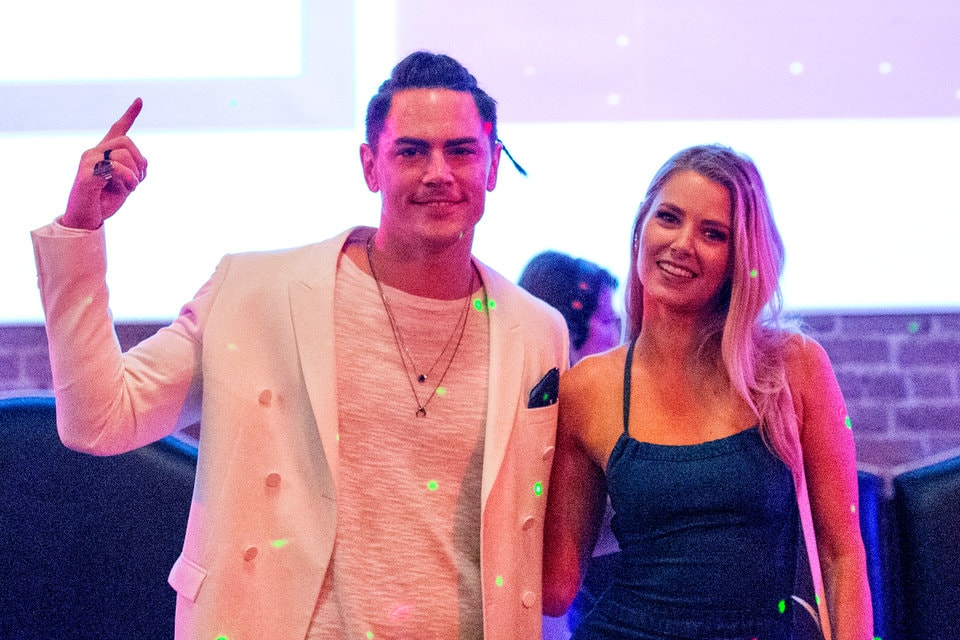 Luckily for him – as always – Brittany is there, and was able to handle the donation for the both of them. She couldn’t resist demanding that Jax make her a damn sandwich now! Feminism has found Brittany, y’all. And she ain’t goin’ back in the kitchen with all Jax’s baloney. I swear throughout this episode, the more time Sherry, Brittany’s mom, spent with Jax the the darker her Tammy Fay Baker eyes and the lighter her lipstick grew – she had seen the devil and this was her way warding him off, or something, I guess!

James Kennedy even managed to fit his enormous hubris through the door and under that hubris’ wing nestled his sweet, innocent baby chick of a girlfriend Raquel who will believe any spouting that James spews. Is she maybe just desensitized to it already? Scheana Marie skuttles right over to inquire how Raquel could find it in her heart to forgive James after his indiscretion with Ellie, her very dear and loving friend, whom was used, and tossed aside, and branded a slut. And we all know Scheana will forever stand up for the friendships she holds near and dear! Raquel is uninterested in this gossip. She’s only with James for these Bravo cameras. Some girls will endure a crop-top wedding and a table full of mean girls for a little fame, and some girls will endure James.

Since no Vanderpump Rules event is complete without Stassi Schroder being bitchy, she has officially turned her wrath on Scheana Marie which, oh so coincidentally, coincided with Ariana Madix telling Stassi to “f–k off” at Katie Maloney‘s bridal shower.

I should back up though… there was more to it than Ariana stating the obvious. Scheana was supposedly planning the shower with Kristen and Stassi. She claims they didn’t involve her in the details, decided to spend thousands, then expected Scheana to split that three ways. I’d like to know how much they donated to Tom’s Fund-rager, because Katie is no noble cause!

Scheana said she didn’t want to spend that much, so Stassi and Kristen decided she wasn’t loyal to Katie and is ruining her DREAM WEDDING by trying to even discuss such trivial details! For finally being brave enough to not be a “people pleaser,” Scheana faced a barrage of hate-texts from Kristen. I’m sure K-Krizzle wasn’t drunk, or anything, that’s just her natural affect. Scheana has a good point about the money, but her claiming to be a people pleaser? Oh, PUH-LEASE. Maybe if you’re the three-headed shebeast she’s attempting to please you rather than have her Sally Lee Press-On nails beheaded and left as remains in the deep dark cave of an outlet dressing room. 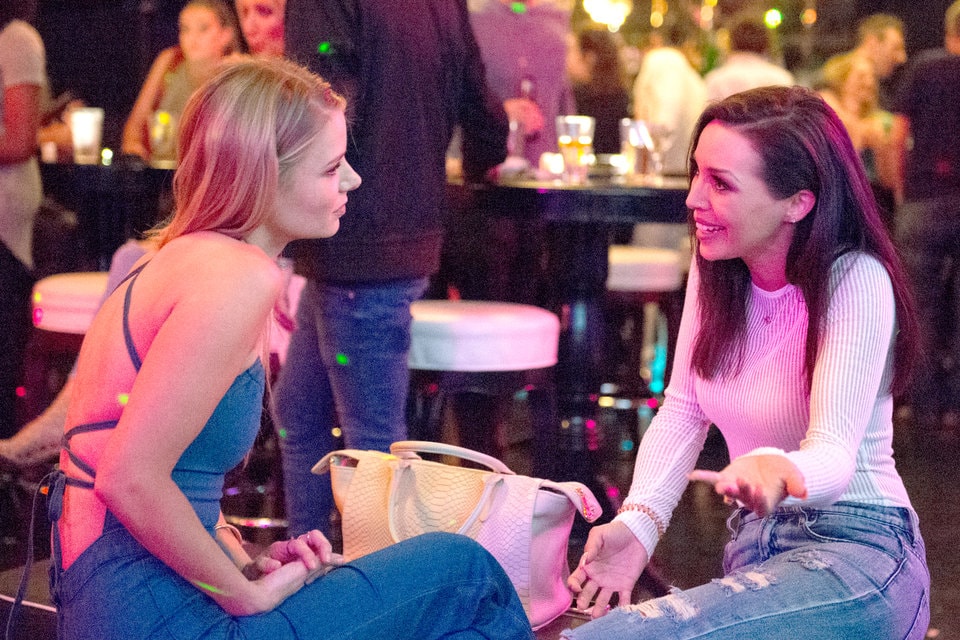 Meanwhile for all the money spent, Katie came home from her shower and started an argument with Tom 2 because he contributes her 0% to her life. This argument continues the following day in a paint store where Katie wears the world’s most atrocious pants. I swear she stole them from Donnie Wahlberg when he was the hot member of New Kids On The Block. Tom is so scandalized by Katie’s messiness that he snaps and calls her a bitch. She storms out and demands Tom 2 Uber home. No, Tom, don’t take an Uber home – take an Uber to Denver, to Morocco, to Timbuktu – anywhere but where Katie lives. And definitely not to a fund-rager where Katie will be complaining about you to Lisa Vanderpump, while slurring into her tequila that she’s a victim. Lisa informs Katie that they need to figure this nonsense out since they’re about to be married. Yep – true love, kids!

Look, Tom 2 is responsible for his own bad choices. He’s saying over and over again how he doesn’t want to marry Katie, yet he did. My sympathy thus runneth out. My sympathy instead goes to Tom 1 for being sold snake oil in the form of the professional braider he hires for his party ‘do.

Luckily Katie is able to temporarily focus her wrath on Scheana, who she, Kristen, and Stassi denounce as not living the truth. Then they cheers to having each other. I just… have no words. Meanwhile Scheana is across the party crying to Ariana because Shay stayed out until 3 am working on his music, and she was all alone, taunted by the enormous photos of her former happiness. The ghosts of delusion, y’all! Even worse Scheana can’t confide in any of her so-called friends because everything is always about Katie! Katie! Katie! And it’s not fair! What about Scheana! Scheana! Scheana!

Well, Scheana, when you lay down with self-absorbed bitter hussies you wake-up friendless.  Ariana looks like she’d rather be watching Tom get braided, but she encourages Scheana with some 8th grade advice from a Sweet Valley Twins book – if they don’t like you for you, they’re not really your friends. Scheana bravely nods, her chin wobbles and tears brim from her giant Anime Sad Panda Eyes as she hugs Ariana tightly for always being there. Across the party the Three-Headed SheBeast is plotting Scheana’s demise.

The feeling, however, is finally mutual! After another night of hateful texts from Kristen, Scheana tattles to Katie about the bridal party situation. Katie is enraged – her bridesmaids are supposed are her slaves only in existence to make her life easier and happier at this MOST HAPPY TIME OF HER LIFE.  If they must forgo shoes, booze, and midnight cheeseburger runs to afford her a DREAM BRIDAL SHOWER, they better do it. They can sell their shoes (and their souls) to afford it they must. Basically, how dare Scheana complain. But complain Scheana does – she plants a little seed, taking root in one of Tom 1‘s braids, that Katie has a drinking problem. Scheana would know – she’s an expert! Tom considers this and decides “maybe” that is the case. 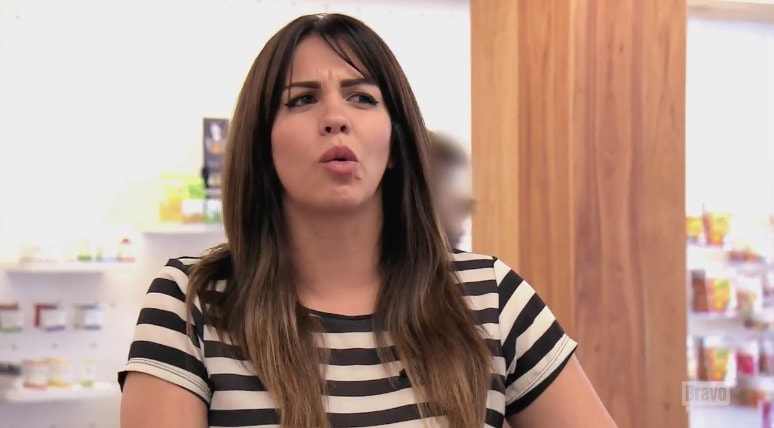 But Katie is about to swap booze for bongs. Tired of being called an angry, irrational, hateful bitch, she and Stassi see a doctor to get medical marijuana cards for irritability. Um…

In the dispensary where they’re supposed to be getting ‘medicines’ for their negativity and hatefulness, they talk shit about Scheana being a bad friend and having no class.

At least someone has made progress. NOT! James has a new job DJing at some swank bar. After he congratulates himself for creating the word “infiltration,” he explains that DJing all about pushing a button! Raquel, who is there to witness the continued RISE of the overflowing foam of James Kennedy, claps and giggles at this magical machine that lights up and makes noise. Max Todd comes in and James tells him about Scheana’s rude comments. James suggests that Scheana should focus on her own marriage which has “almost failed like 3 times already.” While a good point, Max chastises James for being “a bit harsh.” Naturally James disagrees. The only thing harsh is the sick beats James’ laying down as the world’s greatest button pusher on the Fisher Price record player! SUCCESS! Maybe James can make up that word next.

Next everyone is in a hubbub about Jax’s roast because he’s done so many horrible things. Weirdly this entire event was planned by Kristen – who happens to be one of the most horrible things Jax has ever done. Jax is worried that Brittany’s mom won’t see the humor in it his many-storied past. Gee – ya’think? Brittany is worried the tale of Kristen munching her KFC biscuit will be shared – family-style – and considering how Brittany’s mom is strictly a drumstick kind of a girl… Even after getting a whiff of what went down Sherry threatened to pack up her Brit-Brit and promptly take her back home to church where hopefully it’s not too late.

I don’t see how these people can love and be friends with Jax, yet Lala Kent is the spawn of satan for cheating? Speaking of Lala, the devil must have nabbed her cause she’s officially MIA. 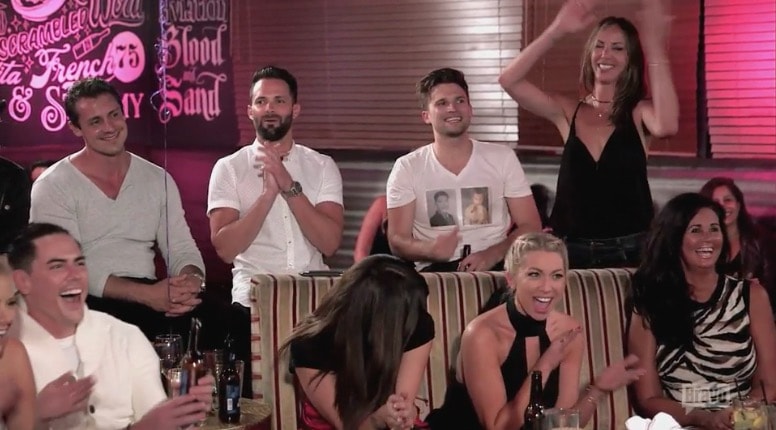 The roast goes about how you’d expect it. It is Tom 1 who mentions Brittany and Kristen’s falling to temptation. It is everyone else who mentions all the times Jax has stolen, cheated, lied, and shown no evidence of conscience, and finally Tom 2 who reveals that Jax may have also had a few encounters of the homosexual kind. And he doesn’t mean the time Tom stuffed a beefcake up his buttcheeks and then Jax ate it. (I CANNOT BELIEVE I JUST TYPED SOMETHING SO LEWD – Sherry deliver me from evil and take me to the church! My own mom’s lips will turn frosty reading this!).

That roast made Jax’s life seem like a bad country song with his cheatin, breakin, thievin, lyin heart and what Brittany’s mama is gonna do to save her daughter, even if she has to lock her in the chicken coop and pull out a shut-gun. 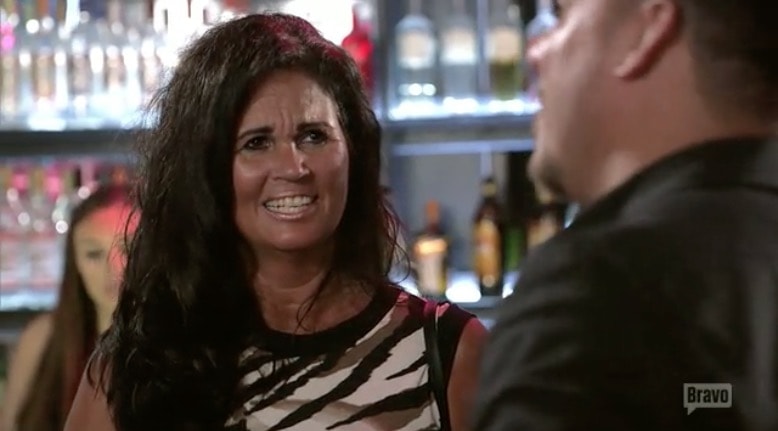 But of all the bad things Jax has done, Sherry’s pentecostal heart seizes upon the instances of homosexuality. That, as you know, is a straight trip to hell in no handbasket! “We’re gonna have to have a little talk,” Sherry’s frosted lips warn, until they have taken over her entire face, growing larger and larger, looming with an ominous grimace until all Jax sees is those two iridescent pink lips telling him how he has failed Brittany. I know the church is known for working miracles, but saving Jax… well, ummm… I dunno – that could be asking a bit much! Does Sherry do exorcisms?

RELATED – Is Jax Cheating On Brittany Too?

And out on the balcony Kristen yells at Tom 1 for revealing that she and Brittany got down. Unfortunately Tom is no people pleasing Scheana Shay and doesn’t care about upsetting the Three-Headed SheBeast.

TELL US – DOES KATIE HAVE A DRINKING PROBLEM? IS BRITTANY’S MOM OVER-REACTING?

Whew, chile. The Bravo streets are talking about Robyn Dixon and Juan Dixon, and NOT in a good way. After…
Reality News 5 days ago

Cast shenanigans in real time have built up so much anticipation for Season 10 of Vanderpump Rules, and the teaser…
Reality News 3 days ago

Vanderpump Rules Season 10 is highly anticipated. Not only have Covid restrictions finally lifted in time for filming, but a…
Reality News 2 weeks ago