Below Deck Mediterranean Reunion Part 1 Recap: The Ballad of Hannah And Captain Sandy

Raise the anchor because it’s reunion time, yachties! The entire Below Deck Mediterranean crew is back and dressed in their best whites to hash out a season’s worth of drama on the high seas. Well, most of them, anyway. And just like most Bravo reunions these days, this year’s proceedings will be entirely virtual. Though this time around, the decision is just as likely to be about logistics, what with the entire cast spread out around the world.

Captain Sandy Yawn seems to be only one landlocked, stuck at her apartment in Colorado with the protective foam corners still stuck on the frame of the artwork behind her head. Meanwhile, Hannah Ferrier is eight months pregnant in Australia, where she filmed the reunion at four a.m. The rest of the crew is scattered everywhere from London (Malia White) and Long Island (Alex Radcliffe, who’s blessedly shirtless in the opening montage) to the islands of the Bahamas (Bugsy Drake) and Martinique (Kiko Lorran). Meanwhile Rob Westergaard and Jessica More are both in Florida, but definitely not together.

The two Wellington crew members conspicuously absent for the proceedings are Lara Flumiani and Pete Hunziker. Though invited, Andy Cohen explains that the second stew declined to attend the reunion because of how she was portrayed on the show. But considering she quit after basically one episode, how much could Lara really have to add? For obvious reasons, Creepy Pete didn’t score an invite after being retroactively fired for being a racist misogynist.

Surprisingly, both Captain Sandy and Malia revealed they’d actually spoken to him after his termination by Bravo. Unsurprisingly, both said Pete didn’t grasp why the frankly disgusting meme he posted was wrong. Not the sharpest tool on deck, that one. I can’t help but wonder if Lara and Pete were somewhere watching the reunion together as it aired. Hopefully they’re cozy in their perfectly-matched toxicity. 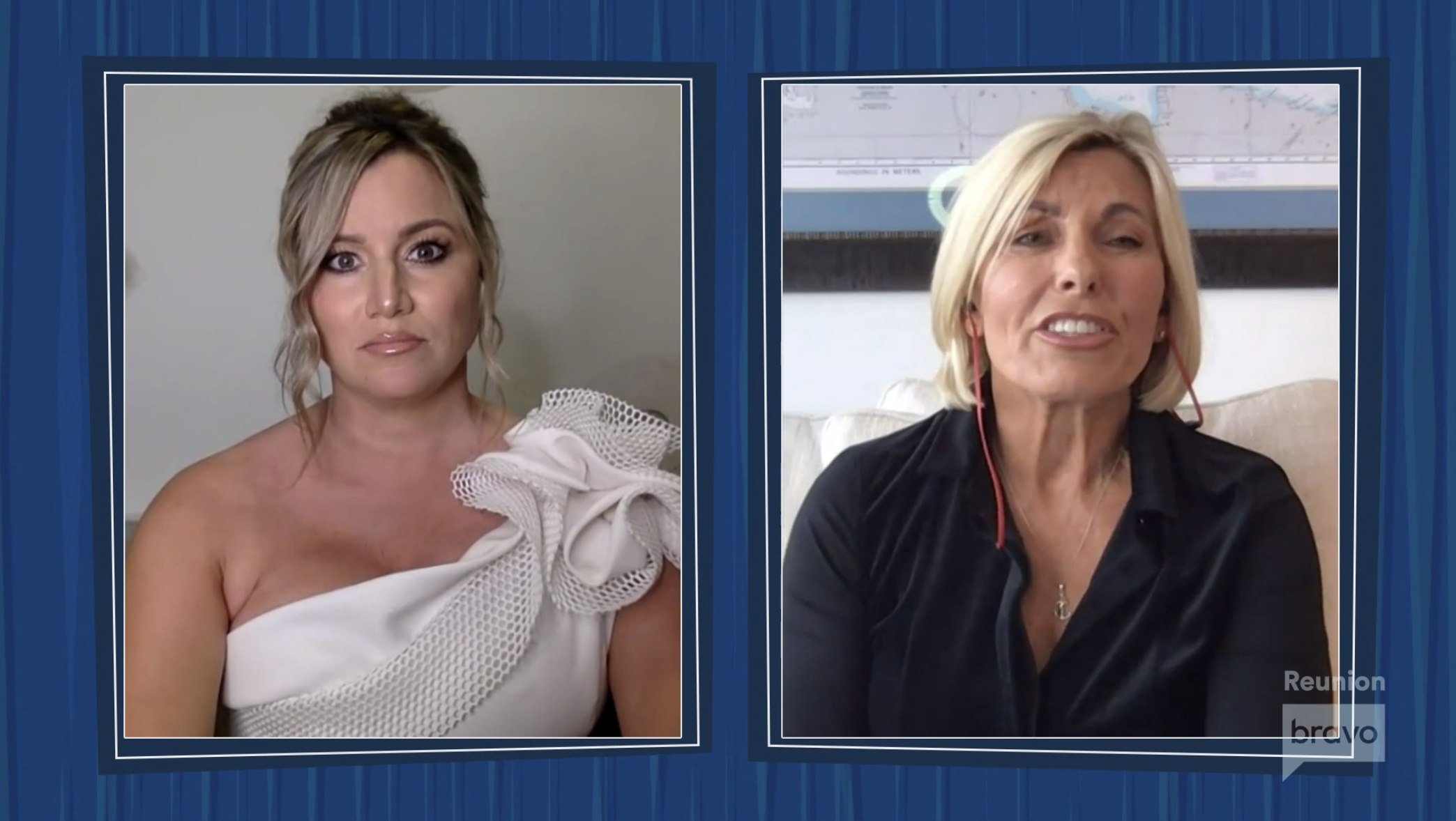 After a brief foray into the interior’s poor laundry system, Part 1 of the reunion mostly focused on two things. First, the contentious relationship between Captain Sandy and Hannah. And second, the injustice of sweet Kiko‘s firing as chef. First up, Hannah vs. Sandy. Are you ready? With some prompting from Andy, Hannah rightly accuses Sandy of playing favorites with the crew every season.

The thing is, Hannah’s never been the captain’s favorite and she’s more than OK with that. She also (probably rightly) claims Sandy came onto Below Deck Med with preconceived notions about her, and she really never stood a chance. According to Hannah, it all started with a scene from Season 1 when she botched the description of moussaka during a dinner service. This was apparently the first thing Sandy brought up when she joined the show in Season 2 and it was all downhill from there.

Naturally, Sandy claims she hadn’t thought about the moussaka conversation in years. But even if she’s doing it subconsciously, anyone with eyes can see she treats Hannah differently than, say, Malia. You know, her favorite? In fact, the way Sandy treated Hannah’s altercation with Lara compared to Malia’s early issues with Pete are really just case in point to this entire argument. Andy then suggests it might annoy Sandy that Hannah’s whole life doesn’t revolve around yachting. After all, she wants a life on shore with her boyfriend and baby’s arrival just around the corner. The captain balks at this suggestion, but something tells me Andy may be right on the money there. 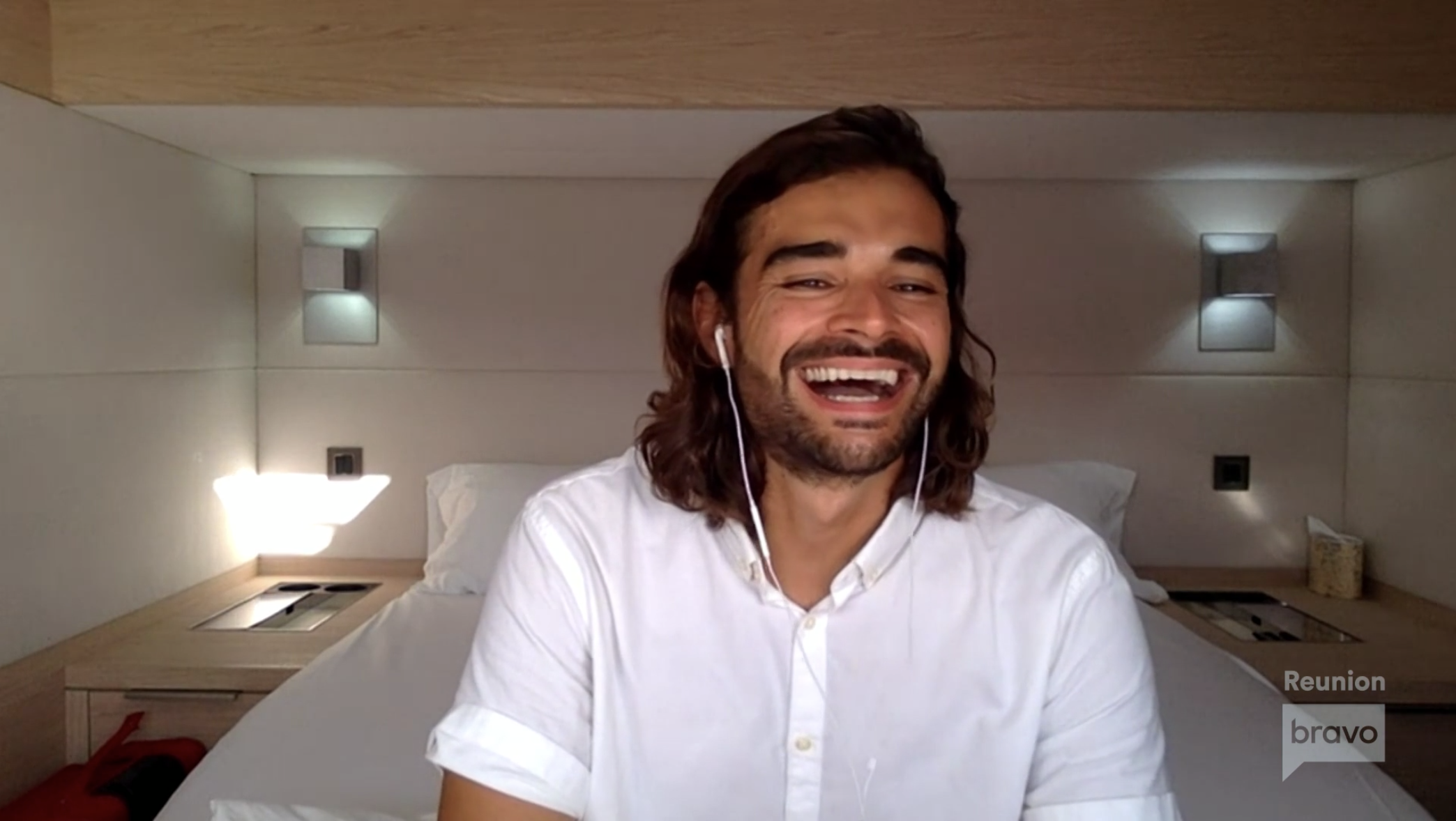 Next up on the docket is the Justice for Kiko movement, which I’d like to think we had a little hand in starting here at Reality Tea. Andy asks the chef if he feels Sandy broke his spirit over the season with her constant micromanagement and criticism. And while Kiko gives a diplomatic answer, I say for everyone watching, YES. That’s exactly what Sandy did.

Even during the reunion, she repeatedly threw comparisons to Tom Checketts in his face, not letting him speak and saying repeatedly that he needed more training. Guess what Sandy? Kiko is doing just fine as a charter chef on a boat in Martinique. He’s still getting no credit for crushing a six-course meal for 12 guests on the fly. That’s something your precious Tom never did. (If anything, he threw 72 tantrums where Kiko plated 72 dishes.) Hannah tosses out that Kiko should’ve been supported more and she’s absolutely correct no matter how many times Sandy squawks, “Did I not, Kiko? Did I not?”

RELATED: Captain Sandy Yawn Shares Her One Regret About Firing Hannah Ferrier From Below Deck Mediterranean

The conversation turns to the ill-fated Vegas dinner that ultimately got Kiko booted from The Wellington. The chef admits he would’ve fired himself too over the presentation of the dishes. But come on. Like he says, everyone has off days. Andy takes Sandy to task over publicly berating poor Kiko over and over in front of the crew. Was that the professional thing to do? Was that kind? No matter how much Sandy insists she was “keeping it light,” the way she treated Kiko was unacceptable. Ultimately, though, Kiko stays his lovable self, and says he respected the captain’s decision. Kiko’s doing just fine now, thank you very much. And with that, our favorite chef exits stage left. 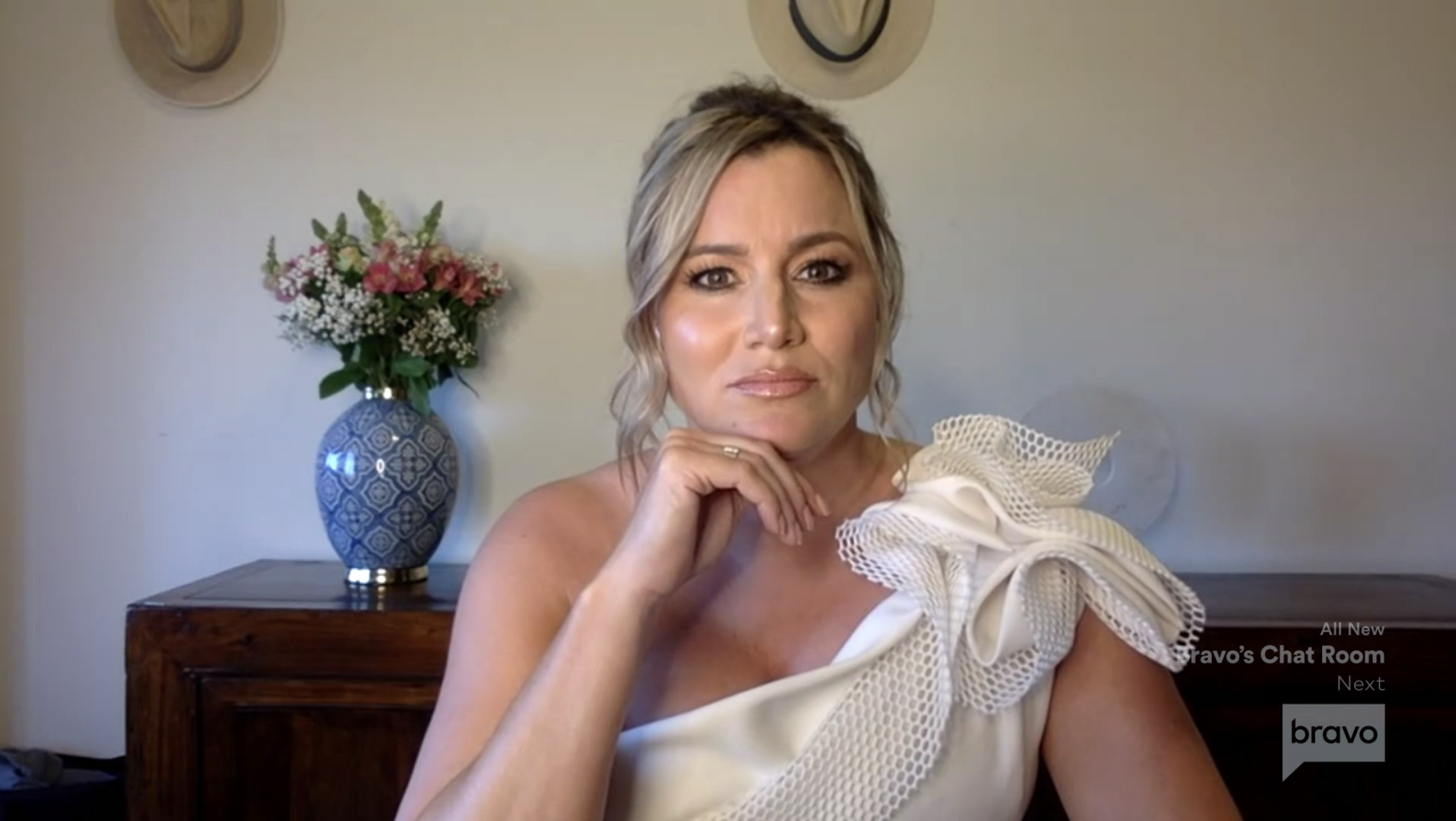 Finally, Andy turns the subject to Hannah‘s untimely firing mid-season. After a squabble over the cabin arrangements debacle, Malia admits she would’ve turned Hannah in even if she’d been down to room with Bugsy. Andy’s more interested in breaking down exactly what was captured in the photo Malia snuck that sunk the chief stew’s yachting career.

For the record, it was a Valium prescription and a vape pen. Remember that. Hannah readily admits it was a mistake not to log her meds, but doesn’t try to give any kind of excuse for not doing so. Sandy harps over and over about having to do what is legally right. And I swear if I ever hear the words “maritime law” again, I’m going to throw myself overboard on my next yacht vacation. (JK, this show has honestly made me never want to charter a yacht for the rest of my life.)

Sandy claims she didn’t trust Hannah to be reliable after finding out about the Valium. She even goes further by calling Hannah a liar who is “dishonest.” And that’s when Andy drops a bombshell. Apparently, the manufacturer of Hannah’s vape pen either reached out to Bravo or put out some sort of statement after the episode. Hannah has claimed this whole time that the pen contained a cartridge of CBD oil for her anxiety. However, the manufacturer confirmed that the pen in the picture matches their THC pen, not one for CBD. And just like that, Part 1 of the reunion ends on a huge shocker of a cliffhanger. Until next week, yachties…

TELL US – DO YOU BELIEVE HANNAH’S VAPE PEN WAS FOR THC OR CBD? DID SANDY BREAK KIKO’S SPIRIT? WHAT’S THE REASON FOR SANDY’S ANIMOSITY TOWARDS HANNAH?