Real Housewives Of New York Recap: Living It, Feeling It, And Breathing It

Leah McSweeney reached her breaking point on last week’s episode of Real Housewives of New York. Her grandmother’s declining health is taking a grand toll on her. It’s causing Leah to lash out at everything and everyone in her path. Heather Thomson picked the wrong time to be shady and stir the pot. It’s clear Heather is purposely trying to illicit a reaction from Leah. However, Leah’s barrage of rage was disproportionate to Heather’s actions.

Everyone has an opinion about Leah & Heather. Everyone wants to take a side. However, which of these Queen Bee’s is actually going to come out on top? Heather might not be sticking around beyond this weekend, but does that make Leah the victor? How do you define a winner in a nasty feud like this? It’s clear these women have a deep disdain for one another already. It all comes down to this episode. Holla! 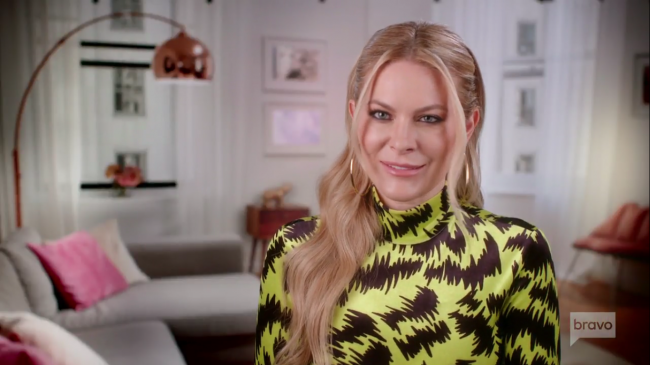 Leah is refusing to ride to the party with Heather. She’s losing her mind over this situation about Heather gossiping. It’s not a huge deal in theory, but she can’t get a grip on her feelings right now. The sadness has overtaken her, and there’s nothing anyone can do to help.

Heather comes back inside the house and tells Leah she can’t scare her away. At this point, it doesn’t even matter, so Leah’s going to the party. That’s the better way to handle this. Go and have some fun, and get your mind off of the darkness in your life.

Luann de Lesseps thinks Heather should shut the f**k up because of Leah’s emotional state. This is the wrong place and wrong time for this sort of back and forth. Smart thinking.

Eboni K. Williams owns that she misspoke because her telephone game is what triggered this. I like that she’s willing to own her s**t and move on. Leah’s on edge, so anything and everything will set her off right now.

Leah apologizes for losing her mind on Heather which is accepted. Heather understands where the anger is coming from, so she agrees to move on. I thought the rift between them would get worse before it got better, but maybe not.

Hopefully the group can focus on having some fun and let bygones be bygones. Can’t they get along for ONE night? Can they have one singular night without drama? Who am I kidding? This group will be at each other’s throats again by the end of the night.

Ramona Singer wants to show off her cleavage at the party. Now listen, show off the girls Ramona. She looks decades younger than she actually is. Show off everything because you look incredible!

I love that Leah is standing next to Heather at the pageant. She didn’t even want to go there with this woman, but she’s next to her all night. Karma is a cruel beast.

Luann’s baton twirling left a lot to be desired. Stick to cabaret darling. Ramona however did some very sensual weight lifting that was equally bizarre. What are these talents? Ramona doing 40 push-ups is an incredible feat though. She is in better shape than almost all of the women.

Eboni does a spoken word for her talent. It was VERY deep. I liked it in theory because it was empowering, but it did suck the energy out of the room. Loved the words and the meaning behind them though!

Sonja Morgan as a mime is everything I never realized I needed in my life. Sonja is comedic magic, and I never want her to ever change. Please stay the quirky goofball, we’ve all come to know and love. Unfortunately for Sonja, it was Leah that won the event! Unknown to her, Luann rigged the entire competition so Leah’d win. 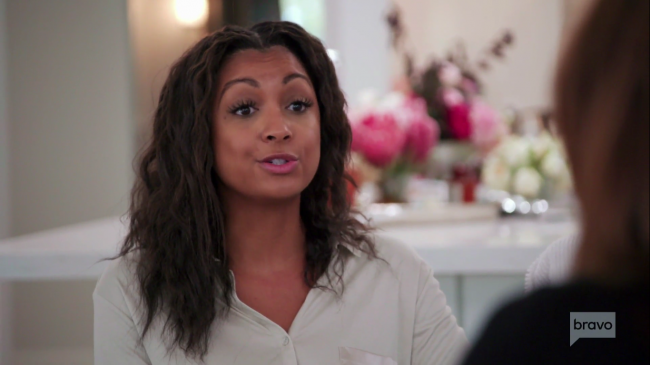 Leah left the trip before everyone else and went straight to her grandmother’s bedside. It was a highly emotional trip for her, but in the end everyone came together. Leah sent the group a text thanking them for being understanding, but sadly Leah’s grandmother passed away. She didn’t make it in time. That’s f**king heartbreaking. I couldn’t even imagine.

Luann & Ramona both break down hearing this news. Even though this group fights like cats and dogs, they come together in the end. Ramona tries to send a supportive text message back, but damn she has no tact. However, she did try. That has to count for something, right?

Eboni video chatted with Leah and was able to ease her pain about missing the final moments. The what ifs will destroy you. Thinking about what could have been will tear you up inside.

Eboni tells the group she might have a sister! I hope this is a real thing and not a Melissa Gorga type of deal. I want her to have a real sister and this be genuine. This better not be a ploy for airtime! However, I trust Eboni is being fully transparent with us.

Thankfully, Heather apologizes for the microaggression about Eboni being “very articulate”. It’s nice that she recognized where she went wrong with that. The implication that people of color can’t speak the language in the correct manner is dangerous rhetoric.

I’d love to give Heather more of a pat on the back, but her comments following that conversation don’t sit well. Eboni is not a RACE BAITER. She’s simply living her truth and navigating a sea of highly insensitive women. Give her a damn break. 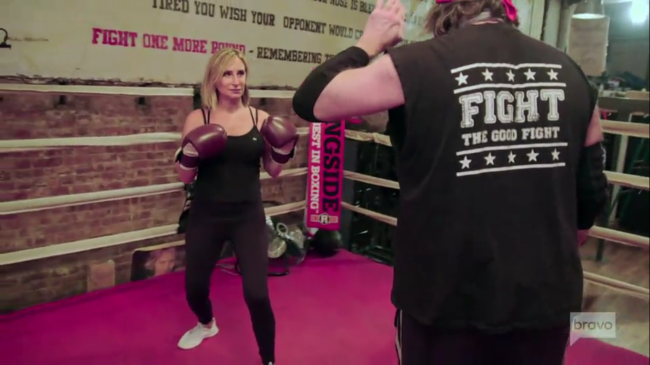 Back in the city, Ramona meets with a real estate broker she met through Sonja. She’s such a friend jumper and social climber! Anyway, Ramona is looking to get into real estate and he’s going to be her sponsor. You can’t deny Ramona’s go-getter attitude.

Right out of the gate, he’s teaching Ramona how to be more socially sensitive when doing this. There’s a plethora of words she has to drop from her vocabulary to make this work. I hope he’s a patient man.

Eboni & Leah meet up at the boxing ring, and they discuss Leah’s grandmother’s passing. She’s doing a bit better since the last time they heard from her, so things are looking up. Sonja’s joining the ladies in their attempt to boost her confidence. They’re going out of their way to lift Sonja up. That’s what real friends do. Ramona & Luann could NEVER.

Leah doesn’t think Sonja gets the respect she deserves in this group. Everyone allows her to become the butt of the joke. She’s consistently degraded by the other women. Obviously she’s living in a world of hurt, and she could use a confidence boost.

This boxing exercise is working like a charm. It’s making Sonja realize she’s nobody’s punching bag. There’s no more room for these women to treat her like the bottom of the barrel. Sonja has self worth, and she should be treated as such. 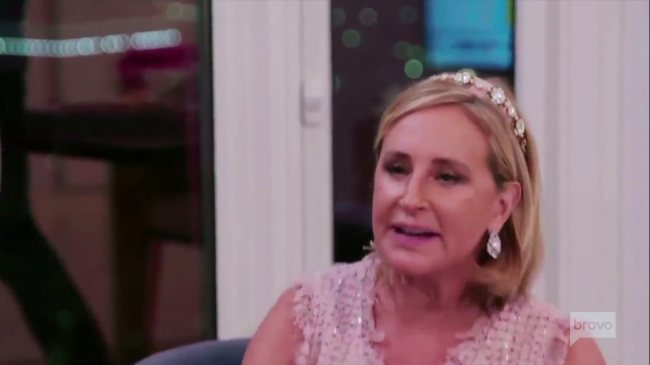 All of the ladies got out and voted which is so great to see because the world needs it. After the back and forth with Heather about not wanting to vote, Leah ultimately exercised her civic duty. The recent election was one of the most crucial in the history of this nation.

The women are filing in to Eboni’s election night party, but Ramona isn’t coming. That might be for the best, simply because I’m sure her beliefs don’t align with everyone else. Is that wrong to say because I’m not sure it would be good energy?

Leah’s dog is wreaking total havoc at Eboni’s party. People who have to bring their pets to everything are a special kind of annoying. Sometimes it’s so inconvenient to deal with. Nobody wants to do with a disruptive and ill behaved animal while they’re trying to have a good time. Luann compares the dog to Leah herself because the similar chaotic nature is uncanny.

Is it really a party if Sonja doesn’t flash her underwear in the first few minutes? PLEASE NEVER EVER CHANGE. She is endless entertainment.

Ramona shockingly agrees to come to Eboni’s Harlem themed event. Sonja decides to speak out against Ramona because she found her post with a picture with Eboni manipulative. She thinks there was an agenda. HERE WE GO!

Ramona also posted a photo with Bershan Shaw. It’s not looking good because it looks like she’s purposely wanting people to see her with black women. There’s always been speculation about Ramona and conjecture about her beliefs. Could she be sinking to an all new low, because it looks bad?

Sonja, Leah, and Luann all believe Ramona is strategically posting. Sonja starts screaming about not liking fake or people who aren’t living, feeling it, or breathing it. HELL YEAH SONJA! SHOUT IT FROM THE ROOFTOPS. Ramona is giving everyone a performance because she needs to improve her image.

As correct as she is, she’s rapidly devolving and it’s not as entertaining anymore. It’s taking a poor turn. Sonja calls Ramona a master manipulator and how she sh*ts on her relationships. Holy hell. Sonja is still going on and on, but all of the women leave. What a night!

TELL US – TEAM LEAH OR TEAM HEATHER? IS RAMONA A MASTER MANIPULATOR? DO THEY WOMEN FREQUENTLY PUT SONJA DOWN? ARE YOU ENJOYING THIS SEASON OF THE REAL HOUSEWIVES OF NEW YORK?

As we all know, the Real Housewives of Salt Lake City Season 3 has been nothing short of a DISASTER.…
Reality News 3 days ago