Stassi Schroeder has returned and Jax Taylor got arrested. All in a days work for Vanderpump Rules, right?

In Hawaii the group continues having a conniption fit over Lala Kent‘s existence. After Lala confronted Brittany Cartwright about Jax’s lying, and then confronted Jax about his lying, to which Jax lied about lying, Lala retreated to her hotel to cry into the complimentary towels. Reality TV is so hard! She just needs her mommy! But, as Lala pointed out, Faith also took off her top, but no one was yelling at her! Katie Maloney, a hypocrite? Nooooooo…

Lala just can’t deal with having her character constantly questioned. Nor can she deal with James Kennedy constantly pestering her for sex. James – she’s just not into you. No one is. Got it?

Back at the bar Brittany makes Jax promise he’ll never lie to her. He swears he won’t… for the rest of the night. Extra-Crispy Kentucky Fried Delusion calls Lala a “little bitch” for meddling. Everyone hits the pool for old school beer bonging. “Old” being the operative word because exactly what birthday are Tom 1 and Jax celebrating? They’re about to collect social security (get $200 whenever you pass “Adulting”; go to jail and pawn your sweater collection after you steal designer sunglasses from a luxury hotel).

Scheana Marie, feeling tension from Ariana Madix, apologizes for the texts she sent Ariana’s mom. Except Scheana didn’t really apologize – she just throws out some justifications and excuses about how she’s sorry that Ariana and Tom were upset by The Truth According to Scheana, but, by the way, everything Scheana said was 100% true.  Ariana rolls her eyes so high I think they got stuck. WHATEVER Scheana. 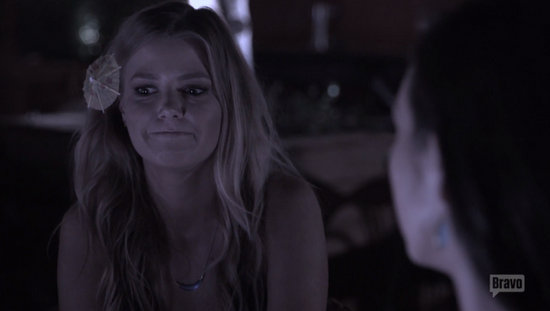 Then Scheana realizes that while she was off staring at her reflection in the pool, Shay got drunk. Because *gasp*: SCHEANA has been giving him shots, then he went to party with booze. However, because Shay’s a alcoholic he should totally know how to stop himself from drinking too much. Mostly because Scheana is like reallyreallyreally pissed that Ariana won’t accept her bullshit and she needs to complain to Shay about it, and he’s totally selfish for being drunk. God Shay – can’t you just, like, be a part-time alcoholic, like the type of alcoholic who can just get buzzed, then shamelessly bow down to kiss Scheana’s feet. Don’t forget to pray to the shrine of Scheana’s wedding photos – found in the bottom of the nearest tequila bottle in lieu of a worm.

The next morning Shay apologizes for getting drunk off Scheana’s tampons. In response Scheana whines about being the bigger person with Ariana. Unfortunately Tom and Ariana are even more upset after Scheana’s deflated, insincere apology.

Back in LA Stassi visits Kristen Doute to commiserate over being left out of all the fun. It’s just two sad girls all by themselves with only their chardonnay. And what the hell was happening on Kristen’s head? Did someone turn her loose with a bottle of Sun-In after her Flowby malfunctioned. Get a hairbrush bitch you’re on TV! 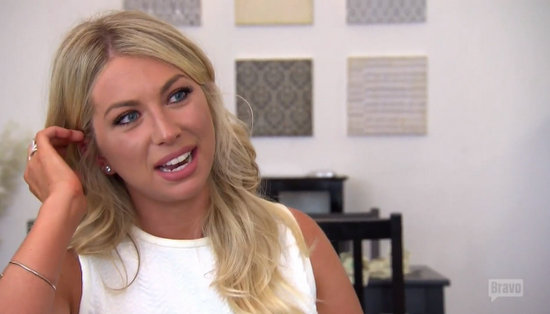 Stassi’s life is a mess: she gave up everything for Saint Patrick, who quickly lost interest in the mopey Stassi Schow, and they ended up more like roommates who eat a lot of cheesecake on the lanai, not sexy madly in love people. They are ‘living apart’ to recapture the magic. Unfortunately Stassi sacrificed all her friends for Patrick and is now reduced to drinking $7 pinot grigio – on ice – while staring at Kritter’s fried and dy”ed SuperCuts hair.

Also Stassi blames Scheana for ruining her friendship with Katie, because it was Scheana who showed everyone Stassi’s Secret Solo Shame (the sex tape she made), yet Katie still went to Miami with Scheana. Yep – I can sense that Stassi, much like Kristen, has totally changed: matured, let-go of past resentments, and accepted responsibilities for the errors of their ways. I’m guessing these two share a psychiatrist along with a delusion.

And in other Kristen news she has started dating (hooking up?) with Jax’s friend, Kevin. 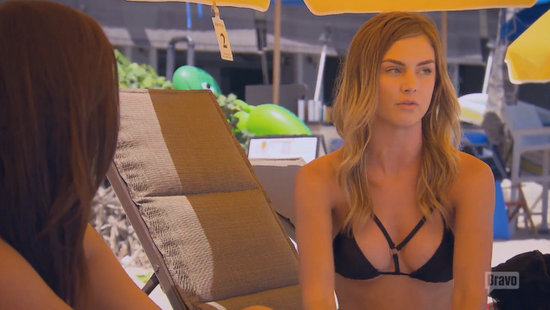 Poor Lala decided looking good is the best revenge. She wears her thong bikini to beach then prances around in front of Katie and Scheana. Lala even shows off her cellulite-free thighs. She does look fabulous – Katie and Scheana could barely swallow the bile of their jealousy. Memories of the way we were! Tom 2 goes snorkeling to avoid looking at Lala’s Lalas. Oh, by the way – Tom 2 and Katie? Never consummated their engagement in Hawaii!

Jax breaks up the party by sharing that Stassi and Kristen reconnected. Scheana rants that “jobless, broke, friendless loser” Stassi is not going to worm her way back into the group to reclaim her crown! Scheana is the new Queen Bee of SUR. Katie decries she will never-ever be friends with Stassi again. 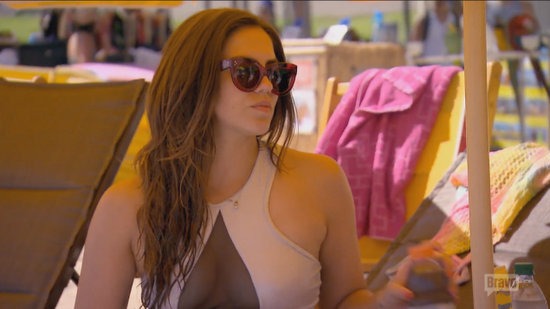 On their last night Lala finally puts on clothes – ironically a referee dress – and Tom 2 barely recognizes her. They slurp booze out of watermelons. Except Shay – he has to sneak tampons in the bathroom. Let’s hope he wasn’t wearing white pants! At the end of the table James and Lala argue over attempting super-drunk sex, but James couldn’t get it up. Lala has decided they’re better off as friends, but James’s fragile bird-like ego is hurt. Lala realizes the only way to deal with the emotional fuckery of this trip is to drink. Heavily. 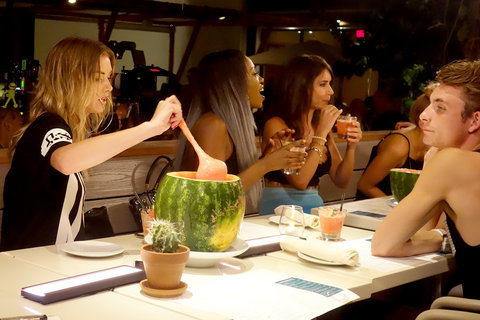 After a few watermelon slurps, Tom 1 summons the courage to speak to Scheana about the texts. When did Tom get all mature-y and adultish. He calls Scheana out for projecting her own issues with Shay onto his relationship with Ariana because all the things Scheana said about Tom: that he’s manipulative, egotistical, and self-centered – well, that pretty much defines Scheana’s issues in her own marriage. The issues she’s not dealing with as Shay slumps, lumpen and secret-tequila sodden at the table looking longingly at the watermelon which can erase his reality if only for a while. Can anything truly dull the whine of Scheana’s self-absorbed rambling?

Scheana takes umbrage with Tom’s assessment, because her issues with Shay are no one’s business. Excuse me: didn’t we watch Scheana involving Tom and Ariana in an intervention for Shay’s addiction? And helping him create a healthier lifestyle?  Didn’t we witness Scheana crying to Ariana about Shay’s drug and alcohol use? 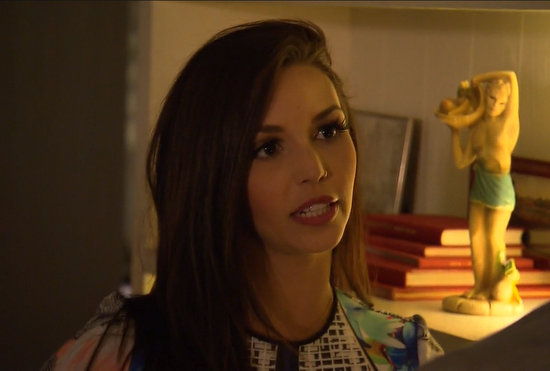 Scheana, again, believes she apologized, which she says she is doing just to be the bigger person. Then she continues to justify her behavior, until Tom 1 tells her not to let her emotional instability project onto text conversations with Ariana’s mom. Scheana decides Tom 1 loves her like a sibling and sometimes they get annoyed with each other. And then Mama Bear Berenstain pops up to help them see a beautiful lesson of forgiveness and starting over in the hibiscus flowers of Hawaii.

With everyone ready to feed each other to the sharks, or Max’s robotic grill, they decide to hit the club for their final night. There, Brittany and Lala form a truce to ‘start over’, Jax swears he’s in love with Brittany, everyone has fun and no one fights. Also Scheana neither lap danced or twerked. Friendships united in love and war!

And in LA, Stassi met Kristen, her only friend, for drinks. Kristen is sooooo not bitter about missing the Hawaii trip that Tom and Ariana banned her attending insisting she’d be drama. Especially after Scheana called to let her know Tom and Ariana were causing all kinds of petty, bitchy drama because Scheana called Tom “cocky”. Someone is Jaxing this story about what really happened… could it be Scheana or Kristen? 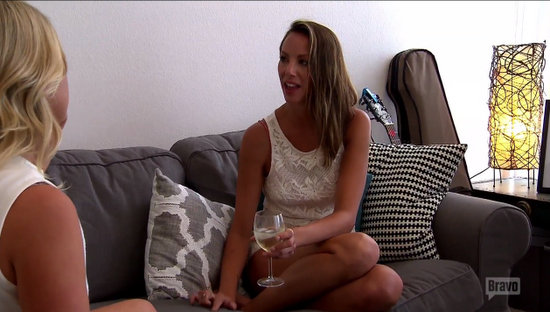 Then Kristen’s new guy Kevin arrives. Kristen called him an uber to get there – even though they’ve been dating like 6 seconds and hooked up approximately once – because as Stassi said, Kristen, the emotional vampire control freak, wants to be a sugar momma. And she’s accomplishing that with her shitty T-shirt line.

Of course since Stassi herself is jobless, friendless, and single, she’s had plenty of time on her hands to Facebook stalk Kevin and discovered he’s got a serious live-in girlfriend. The things Jax and Tinder don’t tell us.

Stassi immediately calls Kevin out on having a girlfriend, which he denies, insisting they broke up – now he’s sooo into being with Kristen. Kristen declares that she would never be the other woman and cheat – she’s just not that type. Kristen does realize we – like Kevin – have access to television right? WE KNOW YOU CHEATED CONSTANTLY ON TOM – including cheating WITH JAX (while he was dating Stassi) and James. Stassi just slurps her vodka and chokes on her own laughter. Oh that is rich. rich. rich. rich. Lisa Vanderpump rich.

Speaking of, Lisa is floating around her infinity pool in a giant inflatable swan fretting about how to micromanage Max from afar. 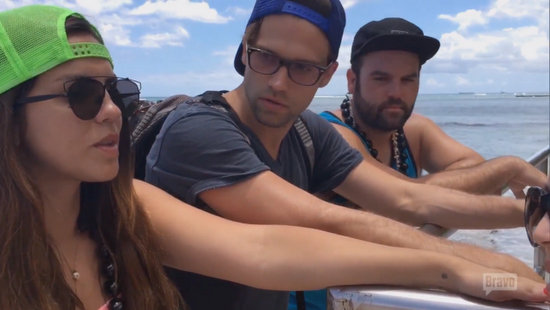 The trip to Hawaii was supposed to end on a good note with no major drama, but hours before their flight Jax got arrested. For stealing $300 sunglasses. Jax claims he was drunk and stupid, and had no idea what he was doing – surveillance cameras show otherwise.

He’s arrested for a class C felony and bail is $11,000. Tom 2 offers to post bond – because Katie is putting out and he’s feeling antsy, restless, like taking a risk. Poor Brittany is shocked and has no idea what to do. Dang – Jaxed twice in one trip and Jax is supposedly stable with her – and in love!

No one can believe Jax was so stupid. They can’t? Scheana is pissed he ruined the trip with his drama. And somewhere Kristen is gloating that SHE should have been allowed to come because everyone else caused way, way more trouble.

Jax is released an hour before their flight departs and makes it to the airport where he apologizes to Brittany profusely and tells her he understands if she wants to break up. More than likely Jax was thinking this was his get out jail free card in more ways than one!

Maybe Lisa should have had James watching over Jax instead of putting him in charge of Max. Max’s worst offense was doing a beer bong!

TELL US – ARE YOU GLAD STASSI IS BACK? WAS SCHEANA’S APOLOGY TO TOM AND ARIANA SINCERE? DO YOU BELIEVE JAX STOLE THE SUNGLASSES ON ACCIDENT?