Last week’s episode of The Real Housewives of New Jersey ended with a megawatt bombshell. Jennifer Aydin openly accused Margaret Josephs of being the source of the rumors. Yes, THOSE rumors. Could Margaret really have stooped that low and done that to Jackie Goldschneider. The salacious gossip about Evan Goldschneider had such a domino effect that tore apart so many lives. What do you believe?

There’s so much unresolved between Teresa Giudice & Jackie at this point. There’s little chance a genuine friendship will ever develop between the two. After this much bad blood, it’s not looking like a plausible option. However, getting to the bottom of the rumor’s origin’s is paramount priority. It all comes down to what Jackie’s willing to believe. Will she believe frenemy Jennifer about Margaret’s alleged treason. Or will Jackie keep her target locked on Teresa? 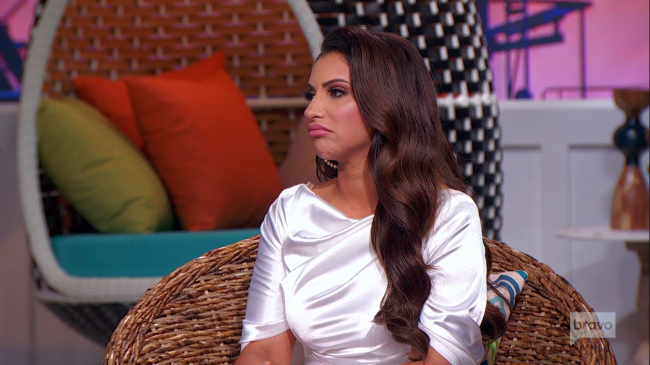 Full disclosure, I totally believe that Margaret is the origin of the Evan rumors. We’ll get to more on that later on, but why is everyone trashing Jennifer for getting drunk? We’ve seen so many of these women intoxicated in the past. Let her have a moment. She let loose and had a great time. Move on.

Margaret is fully projected her childhood issues onto Jennifer. That’s where all of this is coming from. That’s not Jennifer’s problem. Work that out in family therapy or something.

What I don’t like about Jennifer at this reunion is the shaming of Margaret’s sexual encounter with her boss. It should be a universal thing that this sort of action is reprehensible. No man in a position of power should EVER pressure a female into sex. That’s point blank period. Not even sure how there’s so much discussion about this. That should be just how the f**k it is.

Jackie says in the workplace she experienced sexual harassment, but Teresa has not. Teresa’s teetering on the edge of straight up victim shaming with this, and it’s not okay. Even Andy Cohen is baffled that Teresa is willing to make it sound like it’s the victim’s fault. What is it with these Gorgas and their archaic ass attitudes?

Even though there’s so much animosity, both Margaret & Jennifer don’t seem to have closed the door on their friendship. Margaret calls out Teresa for “playing” stupid. DING DING. Teresa’s been playing stupid for years on this show. Thank goodness someone has the balls to call her out for once.

The House That Dolores & David Built 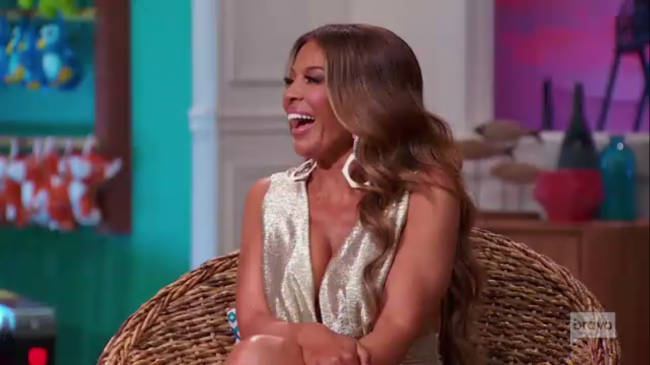 Dolores Catania feels like David Principe does love her, but they only see each other once a week. Once is better than none. Whatever works for them is what should be done.

Jackie thinks not every man would be okay with the closeness of Dolores and Frank Catania. She has her ex husband present all the time, and that’s a big ask for David. If he’s willing to be alright with that, she might have a true guy by her side. She probably doesn’t, but MAYBE.

Andy asks if Dolores thinks the Porsche was a stall to avoid giving her a ring. She doesn’t think it has. She doesn’t thing he wants to get engaged or married at all. Sometimes marriage ruins a relationship. We’ve seen it happen time and time again. Let them live their lives. There shouldn’t be so much pressure to tie the knot.

Andy inquires if David doesn’t want to get married at all or to Dolores specifically. Holy loaded question. That’s honestly so rude to ask like that, but she of course takes most things in stride. She says it’s to anyone

Frankie Catania thinks despite what everyone says, his mom and David will get married. That’s the only opinion that matters. He’s someone actually close to the situation. He obviously would have better insight into the inner works of their relationship. Everyone else just wants to use it as fodder for gossip. That’s all it is.

Teresa’s Got Her Groove Back 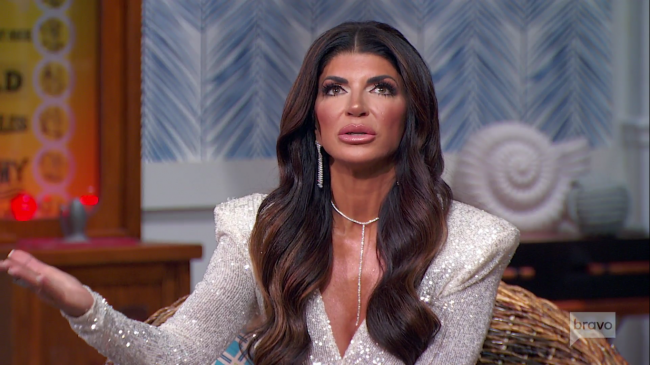 How weird is it to see Teresa in love with a man that’s not Joe Giudice? What a beautiful blessing. Louis Ruelas is everything Teresa ever wanted to have in her life. She deserves someone who actually treats her with the love and respect she deserves.

Even though last year she said otherwise, Teresa’s now unsure of Joe cheated on her or not. If she really believes that, she’s the only one. Anyone with an active working brain cell in their skull knows he cheated on her. I know she might not want to accept it, but come on girl. He clearly wasn’t faithful in that marriage.

Joe & Louis finally met for the first time, but Teresa says it wasn’t that weird. It broke Joe’s heart into a million pieces seeing his ex wife with another man. Too bad. That’s harsh, but maybe he should’ve been a better husband.

Teresa started seeing a therapist which is helping her with her parenting. Teresa from ten years ago probably would’ve never even considered therapy as a viable option. Even though a lot of her traits might still be present, she’s changed a lot as well. There’s been a clear and visible evolution in front of the cameras over the years.

It’s a little weird that Louis has seen every episode of the show. You always have to question whether or not his intentions are genuine because of that. Is he dating her to get famous? Does he actually want to build a life with her? It’s too early to tell, but I hope good things for Teresa and her girls.

For some reason Kim D is still sticking her crypt keeper nose into Teresa’s personal life. Teresa doesn’t talk about “sewer rats” like Kim D. Great answer. Move on! I like that Teresa isn’t letting any of the stories about Louis in the press hold any weight. Block out the noise.

Teresa feels like her apology was good enough to Jackie, but Jackie doesn’t feel that way. Before they can get into another monumental fight, Andy cuts them off. He’s had to do that many times at this reunion. They don’t want to follow any format. They’re ready for duke it out now.

The Husbands Tell All 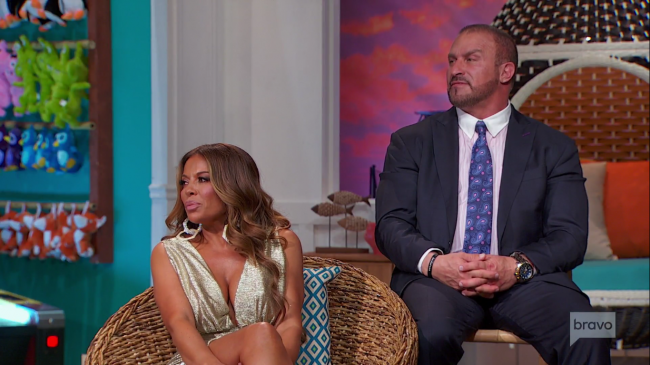 This season was a lot for Evan, but he managed to withstand it all. He’s thankful the negative rumors about him didn’t affect any of his business dealings. The biggest downside to all of this is what his children are now exposed to. If they Google their father, they’re going to be able to see all the cheating rumors. That’s on Teresa….or Margaret depending on who you believe.

Frank admits Joe & Dolores are good friends, so it didn’t bother him about the broken comments. This group blows my mind. Some of the things they say about each other would be unforgivable in other groups. Different folks, different strokes I guess.

For some reason Margaret is blaming Jennifer for the fallout about Joe Benigno saying he heard the rumor. All she did was repeat it. Joe already said it on camera. It was out there. Stop acting like Jennifer did this evil super villain heinous thing.

Andy asks Joe if he heard the rumor. He’s going to say no. He’s been coached by Margaret at this point. It depends who you believe here, but doesn’t it seem like someone the instigator in pigtails would do? Think about it long and hard. Evan believes Joe, so that’s that. Let’s hope he’s right because if not, he will get burned again.

Letting The Rumor Out Of The Bottle 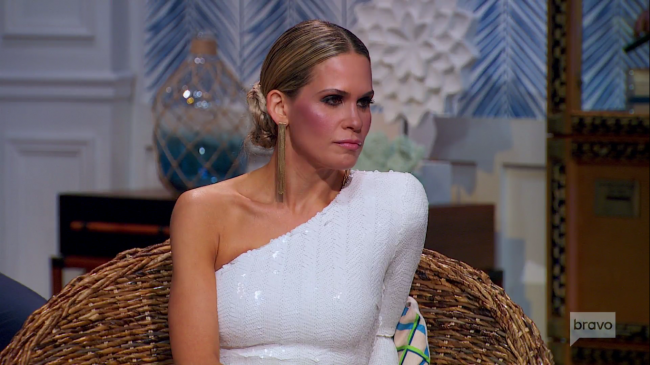 Teresa said she thought about the rumor when she got to the party. It felt more premeditated than that, but there’s no convincing Teresa that she did wrong. She doesn’t get how hypocritical it is to spread a rumor like this about someone else’s marriage. When Kim D did the same to her, she lost her mind and even threw a chair. MAKE IT MAKE SENSE TO THIS WOMAN.

Teresa still asserts she didn’t do this to hurt Jackie. Was it to help her? She surely has a sh**ty way of helping if that’s the case. Jackie calls bulls**t on that. The effect she had was the desired one. This is what she wanted. Then, once Jackie brought Gia Giudice into it, she gave Teresa the out to be a victim. Quite the misstep.

Teresa feels like Jackie always brings up the “jail thing” when they have a conflict. She thinks that’s her way of trying to hurt her. Of course she is! If you come at her crazy with a wild accusation, you’re going to get something just as low back. That’s how it works. If you can’t handle that, don’t start anything to begin with.

Danielle Staub thinks Margaret was the source of the rumor. Oh goodness. Why am I on the same page as Danielle right now? All signs point to Margaret. Follow them if you will.

Everything made Evan uncomfortable watching it back. Same Evan. It wasn’t right what Jackie did bringing Gia into it though. It was clear it was an analogy, but it caused a lot of backlash in Gia’s personal life. For that reason, Jackie should’ve picked up the phone and made amends. She’s dead wrong for not even attempting to make things right.

Jackie keeps trying to convince Teresa that what she did was wrong. Don’t even waste your breath. Talking to Teresa is like talking to a brick wall most of the time.

However, Teresa does finally admit that she was just repeating a random rumor she heard. She claims it’ll never happen again. Let’s hope that’s the case.

Jackie doesn’t know where they go from here because Teresa doesn’t seem to like her. This somewhat permeates in Teresa’s brain, so extends a genuine olive branch this time. She suggests she and Louis go golfing with Evan & Jackie. Well there you go. What a great way to start fresh. Maybe they won’t be at each other’s throats next season.

TELL US – TEAM JENNIFER OR TEAM MARGARET? WHO REALLY STARTED THE RUMORS ABOUT EVAN? WILL TERESA AND JACKIE ACTUALLY BECOME FRIENDS? DID YOU ENJOY THIS SEASON OF THE REAL HOUSEWIVES OF NEW JERSEY?

Gia Giudice grew up on Real Housewives of New Jersey and lived out all of her parents’ drama on screen.…
Reality News 1 day ago

Real Housewives of Beverly Hills star Kyle Richards has been taking heat for her body transformation. She posted some steamy…
Reality News 2 days ago