I know we’ve all referred to the stars of Vanderpump Rules as “Vanderpump Fools” but you know, if the condom fits! Happily some of these people have taken the tentative steps towards adulthood, however most of them are still mixing reiki with booze and wondering why their back hurts.

On part 2 of the reunion, Jax Taylor continued to be confused about, well, everything. Lala Kent defined feminism and her finances, and Katie Maloney cried about how amazing Tom Schwartz is. Regardless of how flawed it may be, it’s nice to finally see these two happy – especially considering how unhappy their wedding was! 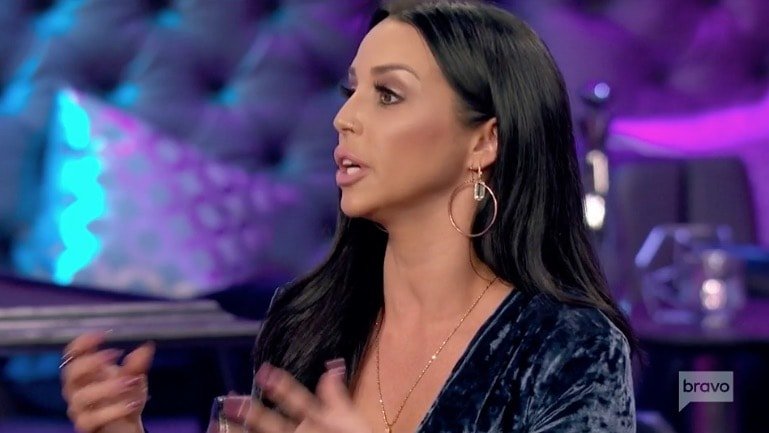 So, Scheana Marie has turned into a surly one hasn’t she?! The Summer Of Robsession made everyone turn their back and close their ears, so now Scheana barely has any pals amongst the cast. Lucky Ariana Madix finds herself babysitting Scheana by default.

The reunion opens with Jax still shrieking and screaming that Scheana betrayed him in the worst way possible when she didn’t call him following his dad’s death, but Brittany Cartwright confirms that Scheana texted daily to check in and was ‘there’ in all the ways Scheana can be – like posting old selfies of herself with Jax with the hashtag #InMyThoughts. You know…

Even Lala is over “Sche-Shu”. Who should be called Me-Shu, or Me-Sche. Actually, Lala seems pretty much over everyone anymore. It’s like, except for railing against James Kennedy, her heart just isn’t in this mess anymore. She’s focusing on her music now! Or maybe after hanging out with Martin Scorsese and dissecting Vanderpump Rules, Lala has gotten too big for her [barely there] britches? But what a feather in Lisa Vanderpump‘s cap that he’s a fan – I wonder if he’ll be making a guest appearance?! 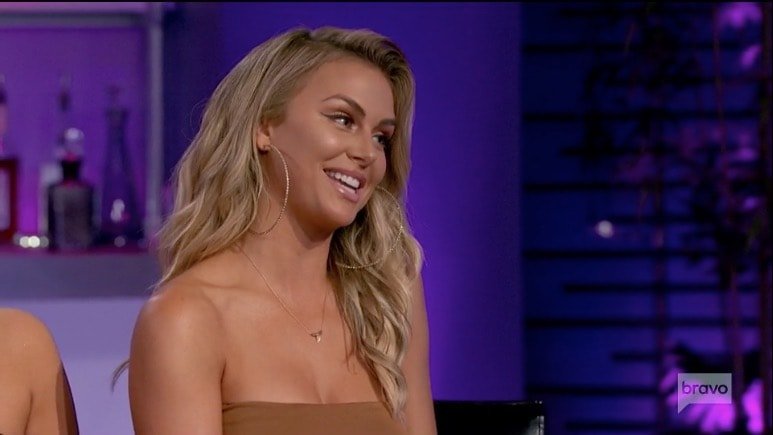 Lala finally opened up about “Rand” – her notorious boyfriend, who is actually friends with Scorsese and on rainy afternoons they like to snuggle on the sofa, binge watch early seasons of the Kristen Doute Kronicles (The Kronik Khaos) and spin the tales into future movie scripts. Then Rand rewards Lala with new purses, bags, and super expensive cars. Scheana sneers under her breath that the only thing Rand provides Lala with is “material things,” but that is just sour grapes because SuperRob wouldn’t even hang Scheana’s TV – only his own.

In truth, this Rand provides Lala with more than material things, he provides her with not only a storyline vehicle (see what I did there!) on this show, and something interesting going on beside the show – which so many of these characters lack as they have let the show become their lives.

Also, Lala wants everyone to know that she pays HALF her rent people, plus the insurance on all her fancy cars and purses! Ergo she is not a kept woman, she is a feminist, who only wants sex with a [fat, old] MA-AN. Lala specifically mentioned that she isn’t attracted to “cute boys” – which must be why things never worked out with James? (Are older gentleman easier to get under her manicured talons? How very un-feminist of me!)  At least James apologized – again – for calling Randall names and making fun of his four-season body. It’s Lala who must maintain the summer body 24/7 if she wants to maintain the lease and the cars, but, that’s feminism for you! 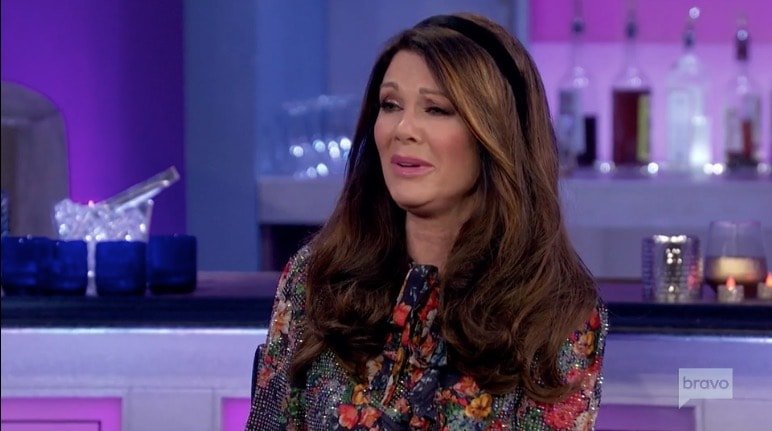 In bragging about all the gifts Rand bestows upon her, Lala has the gumption to compare her car collection to Lisa’s – like they’re both just two gals who switch out their automobiles to fit the weather like they’re shoes! That’s also feminism. Lisa sniffs that Lala’s women’s empowerment is not her kind, and her fancy cars come from good old-fashioned hard work. She smashed the glass ceiling. Lala smashed Hollywood bigwigs – you say tomato, I say tomahto…

Lala also explains that when she met Randall he was legally separated and therefore she is, no way, nohow a home wrecker. Unless she crashes one of her fancy cars into your home, or you know exposes your boyfriend as a cheater during your housewarming party. Oops! Tom Sandoval takes great affront to that breach of etiquette and calls Lala out for picking the “wrong time, wrong place” to let Brittany hear the recording of Jax and Faith sexing.

Thank goodness James had the wherewithal to copy the audio file onto his phone, then send it to Lala – maybe he’s extra savvy being the son of alleged criminals! – because otherwise, this season would’ve had basically nothing going on. In Lala’s defense, however, she points out there’s never a good time for your boyfriend to “stick his dick in somebody else” and she’s right – that’s just as inconvenient, and Brittany was glad Lala gave her the information. Plus, it brought all the girls closer together as they bonded and schemed to keep Brittany in LA, but away from Jax. Pity that didn’t work out… 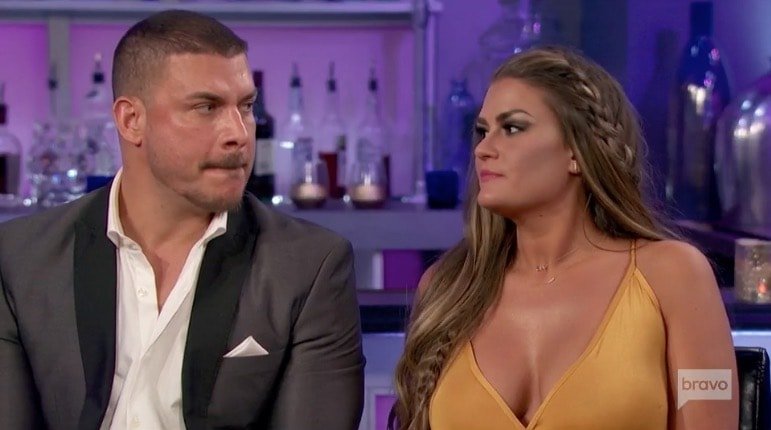 Seriously –  why was Tom 1 deflecting blame onto Lala for Jax’s bad decisions? Because Tom 1 forever hearts Jax. And Jax also forever hearts Jax, or is it Jason now? Speaking of Jason, everyone is very upset by Jax’s conduct with the reiki master especially Kelsey’s advice to dump Brittany and focus on himself. Kelsey clearly doesn’t know him at all! Unless Jason is a drastically different person from Jax? Also, Jax never made it specifically clear whether or not he’s still seeing Kelsey…  Dollars to donuts he’s continues putting out scones and lighting “incest” for their weekly pounding session – and I do mean pounding, cause Kelsey like punches him all over and calls it clearing the bad energy. Jax does deserve to be smacked many times over… 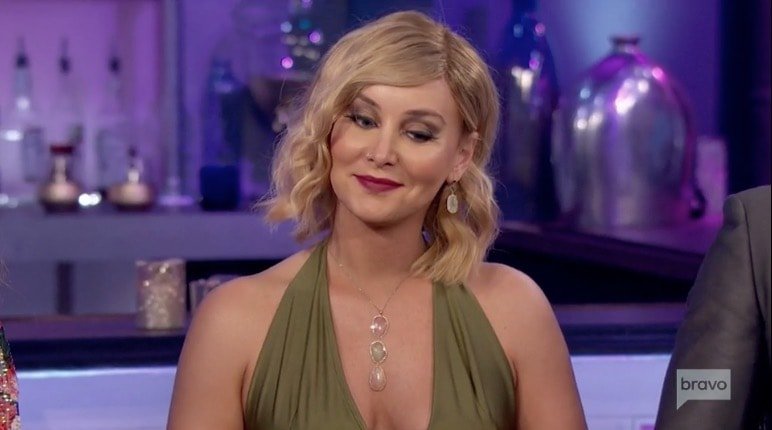 Billie Lee also joined the group for a few minutes to explain the extensive research she did in choosing a vagina. I mean, it is a decision you’re stuck with for life! Billie also explained to Stassi Schroeder why making her feel anxious prior to her date with Jeremy Madix was not OK, but I think we can all agree – even Ariana – that after seeing the video of Jeremy squeezing Stassi like she’s a lemon for his cocktail is “creepy.” For the record, it does not appear that he’s squeezing Billie that way, or any way. They hang out as friends, but her dating life is still nil.

The funniest part of the entire episode was Jax not knowing anything about the #MeToo movement. He thought it meant standing in unity with women. All the ladies – including Brittany – started discussing feminism and fat shaming, courtesy of Lala who thinks advocating sex in change for gifts is girl power when Jax piped up “HashtagMeToo” in an effort to show his support. Jax needs Patrick to show up and give him a lecture on galvanizing social movements!

While Jax never changes and is enterally a bloated, toxic Peter Pan, Katie Maloney has finally blossomed into a grownup. She’s put aside her differences with Lala (Scheana decides it’s because she wanted a ride on a private jet and get an image reboot after last season’s slut-shaming, which is all probably true), she’s come to accept herself and her body, and she’s no longer screaming at Tom 2 for his binge drinking blackouts. Which is probably a bad decision. I think that’s called a “concession,” or turning a blind eye.

Tom 2 defends his drinking as a leisure activity and blames nice adoring fans buying him shots he can’t say no to for why he gets so wasted. Let’s just hope he never comes across Martin Scorsese in a bar! Lisa warns that if he acts this way at TomTom there will be consequences… like what, she’ll tear up the partnership agreement that never t’was? Burn his check that she never cashed? 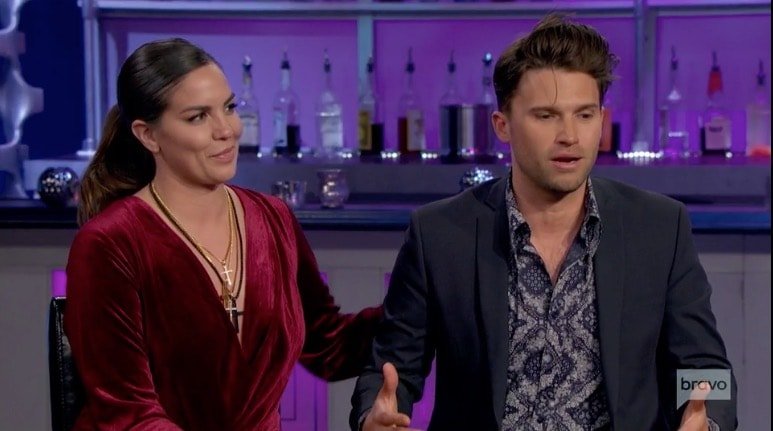 But alas, after years of noticing only the bad, Katie has done a complete 180 in choosing to now only see the good in Tom 2. And by default, he now loves her oh-so-very-much because she leaves him alone to do whatever he wants. This is all very sweet, if not a creepy and disconcerting. Katie also affirms that she doesn’t believe Tom 2 remembers making out with another girl while blackout drunk – a girl it turns out both Katie and Lala knew from high school. Why are we not getting more backstory here?! This girl also perhaps propositioned Tom intentionally? (On Lala’s behest?) A girl whom Scheana was eager to expose as cheating with Tom 2. I mean this is interesting stuff that’s all been vacuumed into the abyss of SUR dramas, and I want to hear way more about this than I do Brittany’s fake ‘confidence boosting’ date with Adam.

Finally, let’s discuss James. Saving the best for last! It is sad that James and Lala are on the outs (largely due to his inability to keep his comments to himself when angry or provoked), but other things in James’s life are going well. Well except for his rather creepy living situation sleeping on the living room floor in the apartment of some elderly gentleman who is frequently out of town. What is going on there?! Why can’t James afford an apartment? What is wrong with Raquel? Can’t Lisa rent him a room in Villa Rosa if he’s that hard up for a decent place to stay?!

I blame James’s parents, overgrown toadstool leftovers from the swinging 80’s scene in London who have dissolved into financial ruin, alleged alcohol abuse, and co-dependence on their barely adult sons. Kristen claims that while they were dating she was more a mommy to James than his actual mom, who put a lot of pressure on James and his brothers. James also shares that his father, Ambrose, is moving to LA where he will surely be working at SUR as a waiter next season! Elderly Kanye grill on full display. 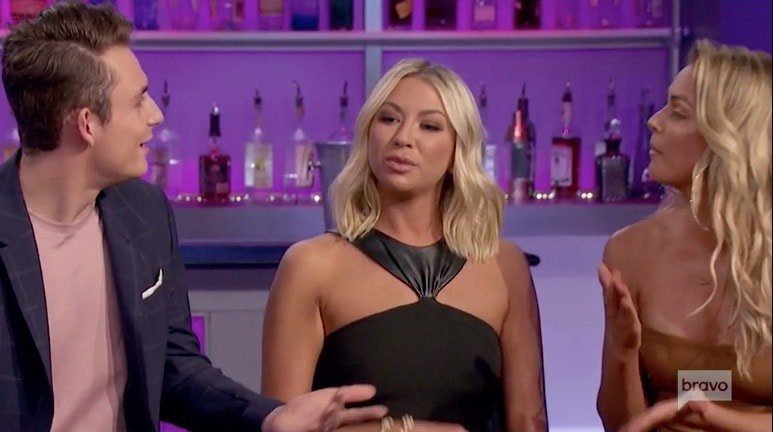 I also agree with all of Lala’s criticisms of James as a friend. He has been a spiteful and judgmental to her; throwing things in her face and making baseless accusations and insults –  and it smacks of bitterness, not a good pal. No wonder she doesn’t trust him. In turn, Lala has been nothing but supportive of him. And if he does feel bad, she’s exactly right: STOP DOING IT! Hopefully, these two can get back on track because there is love there.

In any case, at least See You Next Tuesday is a huge success, and James may inherit some money from George Michael’s estate after all. So yay!

TELL US – WAS SCHEANA OUT FOR REVENGE THIS SEASON? WAS “JASON” INAPPROPRIATE WITH KELSEY? IS KATIE BEING TOO FORGIVING OF TOM?

Vanderpump Rules Season 10 is highly anticipated. Not only have Covid restrictions finally lifted in time for filming, but a…
Reality News 2 weeks ago