Last night kicked off the Vanderpump Rules reunion and the main topic on the agenda were all the horrible relationships (what else?) floating like backwash in the half-drunk cocktails at SUR. From Tom Sandoval‘s gripes that Lisa Vanderpump doesn’t take him seriously as an entrepreneur and restaurant designer, to the many, many delusional thoughts of Scheana Marie Shay Famewhorini and her ROBsession.

Jax Taylor was on an emotional roller coaster, which wasn’t too different from Jax Taylor-coaster we’ve seen all season, except instead of depending on reiki master Kelsey to feel up his feelings, he was actually mourning the death of his father. Through his tears, Jax describes it as the worst thing that’s ever happened to him but the loss made him realize what an impossible mega-douche he’s been to everyone since, oh, time infinitum. It’s like someone held the evil stepmother’s mirror up to Jax and showed him the truth! That person was not Stassi Schroeder, shockingly.

Although even Stassi, who despite hating Jax flew to Michigan to attend the funeral, co-signs that Jax has finally changed. “He hasn’t done a 180,” she explained, but at least he’s not galvanizing people around his awfulness like he did all season. Of course, Brittany Cartwright, wearing mustard yellow and the make-up of a little girl who raided the Wet & Wild display at Walmart alongside her angel wings, was right there by his side all the way. The tragedy has made Jax recognize that he really, really cannot lose Brittany because she quite literally cleans up all his messes, mommies him, and will be the only person willing to accept his crap, and without her he wouldn’t have been able to cope with his father’s death.

Sadly it took Jax cheating with Faith Stowers near the bedside of an elderly woman to recognize Brittany’s greatness. Jax maintains that he was so blinded by a desire to sabotage his relationship with Brittany, he didn’t even realize there was another person in the house, let alone a 95-year-old woman. Faith was essentially “a hole” in his attempt to push Brittany into dumping him. Classy and sophisticated! 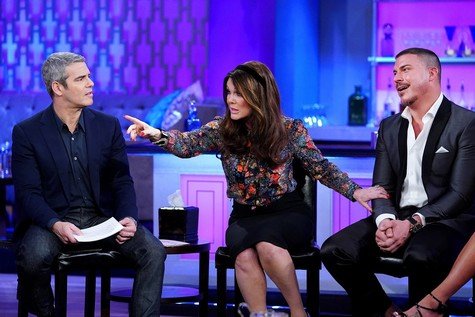 The tragic tale of Jax and Brittany – two American kids trying to do the worst that they can extends to the revelation that they’ve literally never used birth control. Of all the things, OF. All. The. Things… I would not do with Jax! I know Brittany probably had ‘abstinence only’ sex-ed in ‘Tucky, but c’mon – the “spray and pray”? With a man notorious for his “stay and stray,” and many manymanymany knotches on the bedpost. OMG. That’s like 16 & Pregnant level nonsense! Also, Bravo, please get a mobile Planned Parenthood STD unit in there STAT.

Demonstrating that he’s turning over a new leaf Jax is adamant though that if Brittany got pregnant he’s ready to become a dad. Brittany smiles beatifically beside him as Andy Cohen‘s mouth literally falls open and Lisa purses her lips in despair.

Well, isn’t it nice that these two are all patched up? Why do I feel like we’ll be seeing Brittany on an episode of Snapped one of these days? 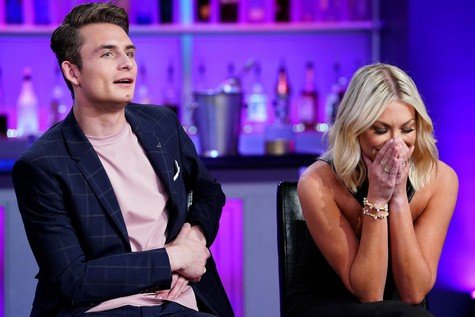 Dating Jax seems to have long-ranging consequences not immediately noticeable. He’s basically rendered Stassi incapable of not loving douches. And now, a tale of Doucheperaux and Desperaux. Somehow I think genius linguist Patrick might appreciate the literature-based metaphorical comparison. Stassi claims she had no idea how horrible Patrick was until she saw the show (really?). Now she’s ashamed and embarrassed. I didn’t know Stassi was capable of those emotions, but of course she’s only embarrassed because she was on TV acting “meek” and pathetic, and also desperate to make Patrick love her. She laments wasting 4 years on this, but it finally gave Stassi and Ariana Madix something to bond over, because Ariana noticed a lot of similarities to her past abusive relationship, especially constantly trying to appease him and be someone you’re not to make him happy.

Stassi and Patrick are obviously OVER and she vows to never again be in a relationship where she isn’t ‘The Patrick.’ Also, Ariana and Tom 1 are now fine and sexy-timed, although she still does not want his rabbity little face nibbling in her lady cave. So thanks for that TMI, Miss I’m embarrassed to discuss my vagina!

If there’s hope for Jax, maybe that means there’s hope for James Kennedy. James insists he has never cheated on Raquel, and he is quite certain about what he’s dipped his willie in, thankyouverymuch! (Psssst… according to him, not Logan!) James was quite subdued last night. More White Kanye, please!

Tom 1 is still feeling under-appreciated by Lisa, who reveals that she has no formal contract with either Tom and still hasn’t cashed their “junior-junior partner” checks. Tom is garrulous over his influence being impotent as he’s basically a glorified bar manager. I see someone still hasn’t been doing their gratitude journal! 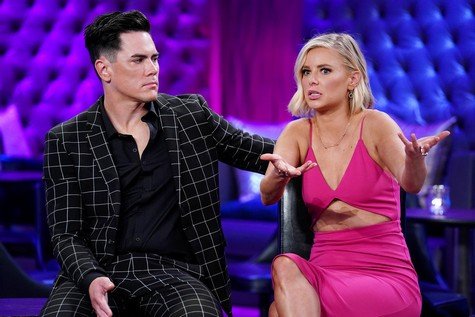 Tom 1’s manties are in a bunch because TomTom is taking too long to open as Lisa focuses on design, but Lisa reminds him that SHE is the one with the long history creating successful bars and restaurants, while Tom 1 is the one with the long history of getting intoxicated and making an ass of himself on television. Including right before a business meeting with the designers! Tom blames his decision to take a shot right before their Vegas meeting on running out of Diet Coke. It’s not like there are any places to buy that in Las Vegas! Tom 2 is considerably more sanguine about the idea that he may get to continually live without the responsibility of doing anything – especially owning a bar – while Tom 1 does all the work arguing on their behalf and caring.

So with all the squabbling about responsibility and value, Jax is no longer jealous that he’s still completely jobless and was left-out of the boys’ bar deal. I mean, he doesn’t work at SUR and he didn’t take that job in Tampa, so he has plenty of time to not impregnate Brittany!

Finally, it’s Scheana Time! I know you’ve all been waiting eagerly and excitedly to see if she’ll admit to being such a narcissistic nightmare (A: No).

ROBsession seems like it should be one of those designer knockoff perfumes they had commercials for in the 90’s and sold out of aerosol cans in the drugstore. Like instead of Obsession by Calvin Klein, it’s ROBsession by Scheana’s Mind. A scent of ew de desperation. Anyway, Scheana still has it and has it baaaad. One does not easily get over a man who can hang a TV in 7 minutes or less (although Rob probably should contact Ramona Singer if he wants to extend his 15 minutes on Bravo.) Even months after their split Scheana is more raw with emotion over Rob dumping her than she was over getting divorced. She admits that in retrospect even Shay with his addictions, and his waywardness, and his capri suns treated her better than Rob did. 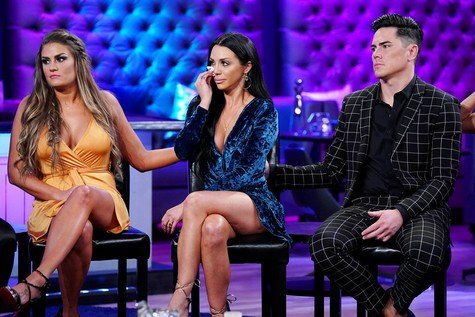 Scheana sobs through admitting that Rob wanted to dump her immediately after the Toca Madera rumor started, but he didn’t want her to have another storyline dealing with a breakup. How kind. Instead, he stuck it out and then broke up with her two weeks after shooting wrapped while continuing to text select members of the cast, like Lala Kent‘s man and occasionally Jax. Scheana is shocked – shocked, I tell you (seriously) – to learn that Rob was basically using her to be on TV, even though he pretended he didn’t want anything to do with the show. Lala reveals that Rob often ‘pulled a Patrick’ and hid from Scheana to go out, but if he found out Lala and Randall were going, he’d attend.

BTW: even though Lala and Scheana are fighting over private jets, Lala would still “deck” Rob for how he used Scheana. True friendship! In a lightbulb moment, Scheana sobs that even after she was so terrible to Shay, he still stuck by her. I’d say Scheana got what she deserved in Rob. Although apparently she still hasn’t processed the break-up which is why she wasn’t able to call Jax with condolences about this dad or attend the funeral. Also, she was busy in Vegas preparing for her show “Sex Tips For A Straight Woman From A Gay Man” (let’s hope there’s a scene on ‘He’s just not that into you…’). 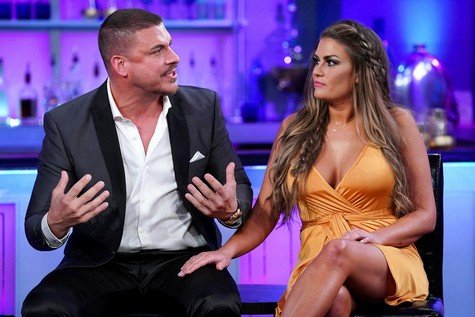 Jax is projecting all his anger and grief onto Scheana, ostensibly because he’s enraged that she wasn’t there for him enough. But you guys, Scheana texted him. Instead of calling she immediately texted so he could go back and look at over and over when in need of comforting words to help him manage the pain of his loss. After all, Scheana understands – she lost ROB. Apparently if you really want to piss Scheana off, though, call her selfish and a negligent friend, because she stormed off the stage to cry about how Jax doesn’t appreciate her and that Rob did-too always love her even though he was telling people he hadn’t said it and maybe wasn’t actually in love with her.

Ariana is the only one who is willing to go backstage and console Scheana, who retreated to hair and make-up for a touch-up while whining about how Jax was in Vegas to party but couldn’t be bothered to see her show, even though she offered him tickets and red carpet. In lieu of flowers or donations to a charity for his dad? How telling that whenever Scheana is upset she fixes her make-up? That’s like the sign of ultimate self-obsession, the sequel to ROBsession is SCHEAsession.

The entire time Ariana and Scheana are backstage, Jax was ranting from his chair about how selfish and obnoxious she is. At some point everyone just got bored and tuned him out. Jax was like transported to an altered state or something. Maybe he was unloading all his self-loathing into Scheana-loathing because honestly a lot of his raging didn’t even make sense.  Finally, Scheana got her false eyelashes reattached and was ready to return to the stage. She was in a state of shock, though, because she went into the reunion confused about what people would even have to come at her over… Oh, hahaha – will the delusion never cease? Let’s hope not!

Logan Noh Denies Hooking Up With James; Says Their Friendship Is Over

TELL US – DO YOU BELIEVE JAX HAS CHANGED? ARE YOU SURPRISED ROB WAS USING SCHEANA?