As always, I think the Secrets Revealed episodes are better than most of what we’ve seen throughout season. And Vanderpump Rules was no exception!

Jax Taylor is totally having a pre-midlife crisis. He’s too old for a quarter-life crisis (let’s be honest, no one expects him to live to be 120 years old) and technically he’s too young for a mid-life crisis, so he’s in a 2/3 life crisis, which means having 400 birthday parties dedicated to doing things kids should do. Like the trampoline park where Tom 1 suggests they play dodgeball on teams of Jax plus all the women he’s slept with, vs. Tom and all the people Jax hasn’t slept with! Bouncing boobs of many incarnations (Jax being the biggest boob of all).

Actually, it was the season of Jax, and, it was totally too much Jax (his shenanigans have overstayed their welcome), but here we go again! At least for the last time.

The Jasification of Jax also includes the requisite 2.5 minutes of community service. Predictably Jax finds a Habitat For Humanity team led by a hot woman (probably on recommendation from Kelsey) and dragged Tom 2, also of indeterminate immaturity, along on the revamping process. Because two louses are better than one?

While limply holding hammers Jax and Tom 2 fretted that they’d chip a manicure or get a farmer’s tan before their Playa del Carmen vaycay. They were like toddlers playing with a Fisher Price toolkit. Eventually, they just sat down on the sad little frame they poorly constructed, a great simile for their actual lives, to ponder how they’d each f–ked up so much – both metaphorically and actually.

Tom 2 tried to delve into Jaxson’s inner life, to reach the root of why he cheated on Brittany Cartwright – if only to have a reason to defend Jax to Katie Maloney, but the only thing deep inside of Jax is his hunger, so they went and got lunch instead. Jax has no depth unless you count the limitless depth of his depravity and love for lunch meat.

Later Jax decides the right way to fix things is by getting botox. Like if he makes his jaw look less attack-dog then everyone will see his Jason side. So he gets botox to reduce his jaw and comes away with softer edges. It’s likely the only of his self-improvements he believed matters, A) because the results are tangible and noticeable on the surface; B) because it requires no effort on his part, and C) because what Jax really seeks is to botox Brittany’s emotions and his own impulses to self-sabotage. The frozen brain bone is connected to the jaw bone, and the jaw bone which kisses some girl not your girlfriend is connected to the heart bone, and the heart bone is connected to the boner… 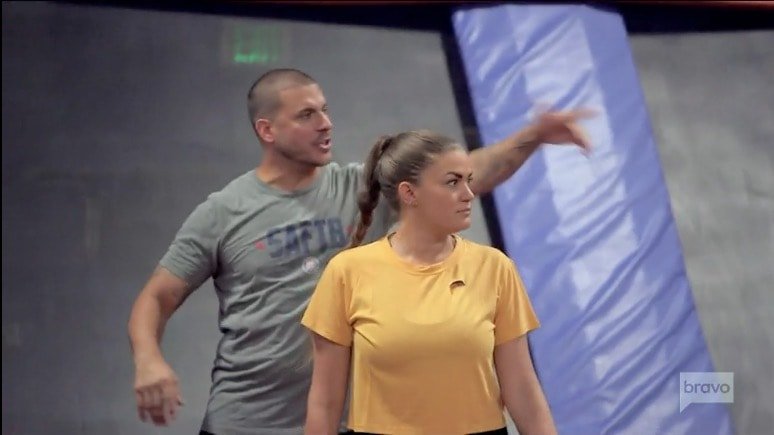 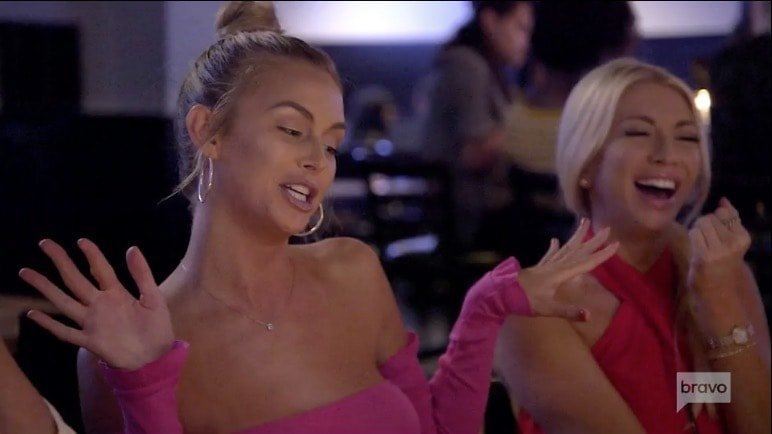 Most of the things coming out of Lala do not seem healthy. Like her idea that surgically altering her body and then showing it off equals high self-esteem. To know Lala’s body part obsessions intimately is to love her? Actually, if you know about Lala’s body or Lala’s man, you pretty much know all there is to know about Lala. She’s a she-child reduced to the sum of her useful woman parts; a nesting doll of vag, tits, smile, ass, and um, BJ lips? The smallest doll, the one that doesn’t open and has nothing inside, is Lala’s brain. Which just has FEMINIST scrawled on it in hot pink Comic Sans font. Lala probably thinks Comic Sans is rap group from the 90’s, just like she thinks feminist is an advertisement for Mi-Rand’s plastic surgeon friend.

Lala also tells us that (presumably pre-boob job) her boobs were different sizes so she had a heart tattooed around the smaller boob’s nipple. How sweet. /Sarcasm

James Kennedy, who was in all his glory last night, accurately assessed why his relationship with Lala ultimately flopped – he was the “broke busboy” and Lala ditched him for Mi-Rand‘s PJ. I believe it goes deeper than that – like Lala has goals, professionally and personally, and she recognized that James is the eager puppy who would pee on the floor too many times until the owner put a ‘free to a good home’ advertisement on Craigslist. Only Lisa Vanderpump has the patience for all that pissing about. And Lala, despite her love of physical alterations, is on borrowed time with her hot body and better use it to further her position while she can. No shade here, just my assessment. 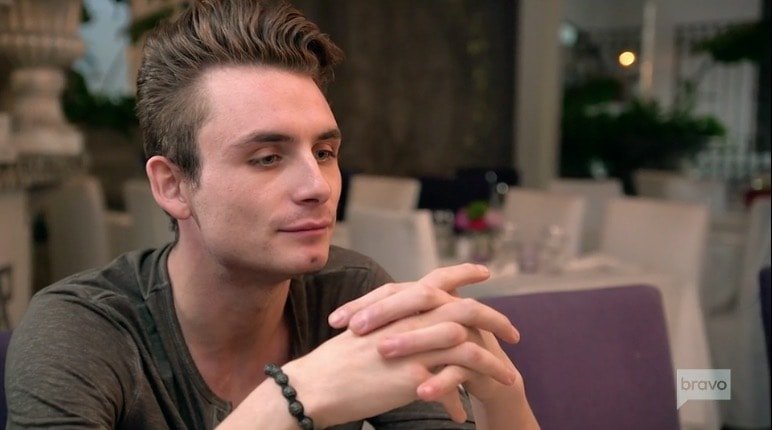 James obviously still has unresolved issues over Lala and longs for the days when they were making out like the teenagers they practically were while flying commercial. These were sweeter simpler times and I bet Lala yearns for them too, in her way, but commercial air doesn’t appreciate Lala’s Mile High Club sensibilities, so … you know! Lisa does James the good service of warning him to lay-off Lala’s man and James knows this, but can’t stop himself. Just like Lala can’t stop eating Raquel Leviss‘s pasta! Maybe the “pasta” is actually James?!

The best James moment, though, was when he found Jax’s phone on the floor of SUR and asked Stassi Schroeder if she still knew the password so they could see if there was any dirt. Stassi knows what lurks beneath and even her mind isn’t dark enough to deep dive there, so she pretends Jax is smart enough to change it. Lala got all self-righteous on Brittany’s behalf, so James fondly recalled the days when Lala had cajones and wasn’t trying to suck up to the likes of Stassi’s Shemotional Terrorist Cabal. Lala complained that James is always trying to come for HER pasta, which turned into another argument about Raquel’s pasta. Is pasta a euphemism for pussy? patriarchy? patchouli? Or does Raquel just really like carbs? Why is the most interesting thing about Raquel the pasta we’ve never seen her, or anyone else, eat?!

Round 2 of the pasta argument ended in the same saucy mess of James not being able to apologize for comparing Rand to a fried goat cheese ball. 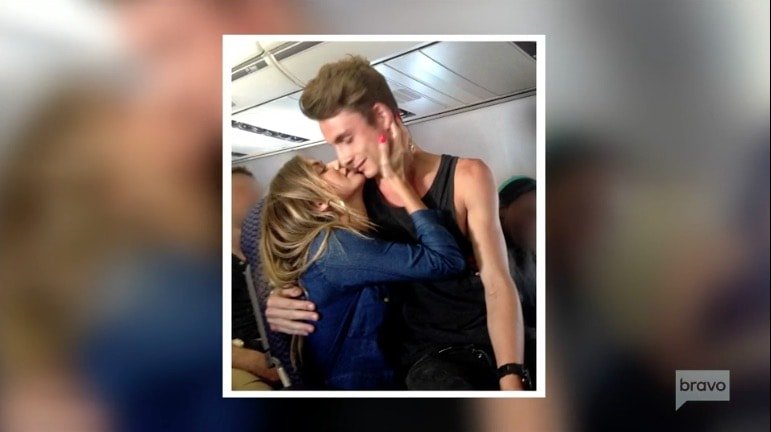 Here’s the thing, I do enjoy Lala, but I wish she would stop bragging about how to have body confidence and all the people who pay her bills, even though I’m jealous and slightly in awe that she can find people willing to FIGHT over paying her bills. Also, let’s be honest Lala’s obsession with “Rand” is no different than Scheana Marie‘s obsession with Rob. (Except that Rand might actually like Lala.)

There were so many cringe-worthy ScheRob scenes last night! YAY for me! Also, Shay made an appearance! He was glowing with happiness like a photoshopped bride in her life-sized wedding photos. Speaking of, Andy enquired about where they all went after the divorce and Scheana revealed that a fan bought one – probably for target practice or some other prank – while another went to the Museum of Broken Relationships in LA. That is a real thing – there’s also one in Bratislava Croatia which my mom recently visited – only to pay her respects to Scheana’s triflingly short delusional marriage. And yes, Jax does need an entire exhibit. Let’s just dedicate next year’s MET Gala theme to that, actually.  The Jaxification Of Fumin’ Hearts and everyone can dress up like Stassi after 5 hours of day drinking in the California sun. Actually, let’s just make that the theme of Stassi’s next birthday party – she appreciates the macabre and the murdering of virtue and innocence! 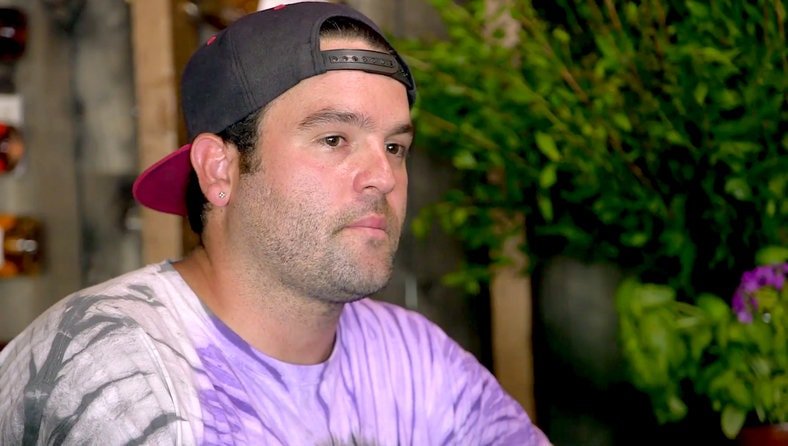 Anyway, back to Scheana and Rob. She was the original Toca Madera girl, except it wasn’t Toca Madera, and Rob was the hostess, not some random. Hilariously Scheana initially rejected Rob – he’s probably been plotting his revenge all these years and then finally seized upon the opportunity to dump her on TV after mortifying her. Too bad he presumed Scheana has the capacity for humility.

As Scheana told us, she and Rob, they had a lot of firsts… some very graphic firsts. /BARF Somehow James and Raquel ended up out to dinner with Rob and Scheana where he told the story of how he used to date the daughter of the Sultan of Brunei. Or at least that’s what her instagram bio said. While Raquel ponders the difference between risotto and ravioli, James ponders how the mighty have fallen right into Scheana’s life-sized usie collection. I wonder if there’s a portrait of Scheana and Shay being used for dart practice in the princess wing of one of the sultan’s palaces?

The other thing that happened was that Tom 1 tried to convince us that Zoolander was based on his real-life success as a male supermodel. In addition to Blue Steel and Le Tigre he also coined the poses Man With Peach Pit In Manties, Ice Ice Loser, Hungover Morning, Sun In My Mascara’d Eyes, and Hipster With Coffee Roasting Concern. All of that perfection was loaned out, charitably, for a St. Louis Magazine no one has heard of. Assisted by Tom 2 who is an expert on Man With No Peach Pit In Pants. Fly little protégé, fly!

Speaking of protegé’s Stassi and Patrick’s relationship has devolved into him being her vernacular coach. It’s so her podcast can become even more galvanizing! Does he mean ostracizing? Which is his current lesson plan, because they’re only communicating through email. Basically, Patrick sends Stassi a list of inflammatory and angry but big, fancy diction words and asks her to define them, then use them in a self-deprecating sentence. Brittany notes that those who can’t do relationships are often the first to give advice. Ergo those in glass spray tanning booths shouldn’t throw tantrums. Or stones. Or baby bottles. Because Lisa is only interested in cleaning up James’s mess following a promise she made to his disastrous parents that she will always take care of him. James mistily admits that coming to SUR is like coming home. Which is both sad and endearing. But this is why I love James – unlike Jax there is actual softness and sweetness deep inside.

TELL US – WHAT WAS YOUR FAVORITE SECRET REVEALED? HAS JAX TRULY CHANGED?

Joe Gorga and Melissa Gorga have marketed themselves as a wholesome Italian-American family. That’s been their schtick on Real Housewives…
Reality News 14 hours ago

Another day, another political scandal with the Real Housewives of Salt Lake City. Former Housewife (and a boring one at…
Reality News 6 days ago

After the disappointment of Real Housewives of Beverly Hills Season 12, we are finally seeing some cast changes that could…
Reality News 1 week ago